Crying Suns Is Like FTL But With A Better Story 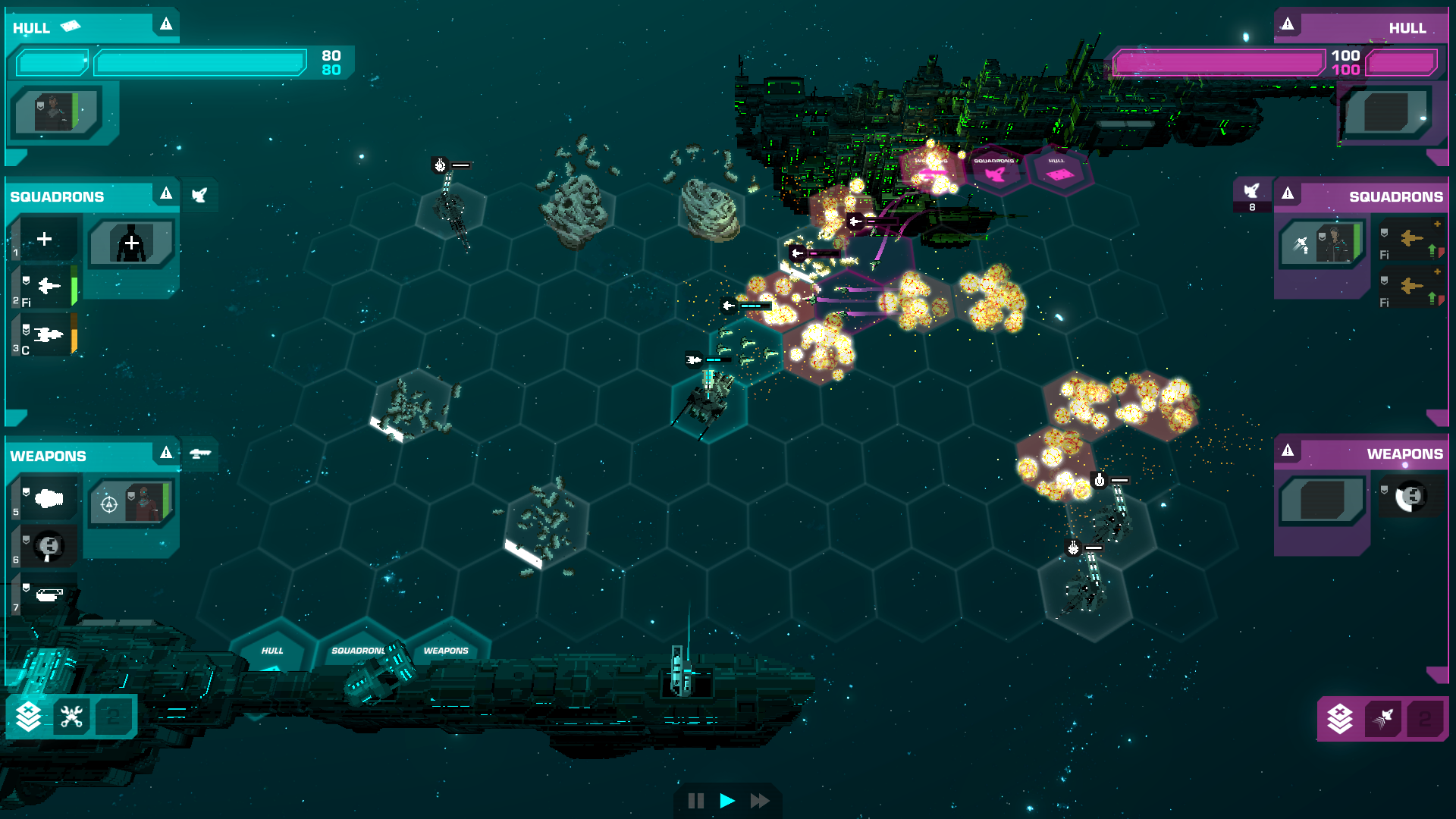 After raising over $116,500 in crowdfunded donations last year, Crying Suns arrives on Steam today. Its art style and core mechanics both draw obvious inspiration from similar, years-old releases, with a narrative that constantly makes promises of answers over the horizon. Despite a dizzying opening determined to beat players over the head with a Wikipedia page’s worth of information on its fictional universe, Crying Suns eventually reveals itself to be a fairly competent strategy game with a few roguelike elements and a compelling story.


Crying Suns opens with the protagonist, Ellys Idaho, waking from hibernated sleep. Idaho, an automaton named Kaliban explains, is an admiral of the Imperial Fleet, sworn to defend the territory of the Empire’s deified ruler, Emperor Oberon. After a catastrophic event led to the death of Idaho and his entire crew, he has been “resurrected” by way of cloning. His memories have carried over, and they’ll continue to be transferred through hundreds of thousands of clones that have been created for just this purpose.

Players are given the chance to pick the Kaliban’s brain about the people, places, and concepts it’s mentioned. Emperor Oberon, it’s explained, is credited with inventing highly intelligent robots known as OMNIs (of which Kaliban is just one type) as well as Neo-N, the advanced compound that fuels everything from ships to Folders, structures that allow ships to travel wormhole-like through the universe over massive distances.

Admiral Idaho must travel to the heart of Imperial territory to unravel the mystery of what happened to his original fleet and, eventually, why OMNIs have completely shut down, leaving civilisation in a state of chaos.

Got all that? I took notes, personally.

It’s hard not to draw direct comparisons to 2012’s FTL: Faster Than Light, but Crying Suns does add enough novel layers to prevent it being a flat-out clone. The game hands over control to a huge battleship, which players must equip with officers and squadrons of fighter pilots. The officers are crucial, as they each come with their own unique set of skills.

One, for instance, might give your fighters a little extra oomph in battle, while another ensures your battleship remains in one piece with constant healing. Still, the core loop of travel, deal with encounter, fight, avoid an enemy pursuing you on the star map, repeat echoes many of the same systems introduced in FTL, just with a more inventive narrative tying everything together. 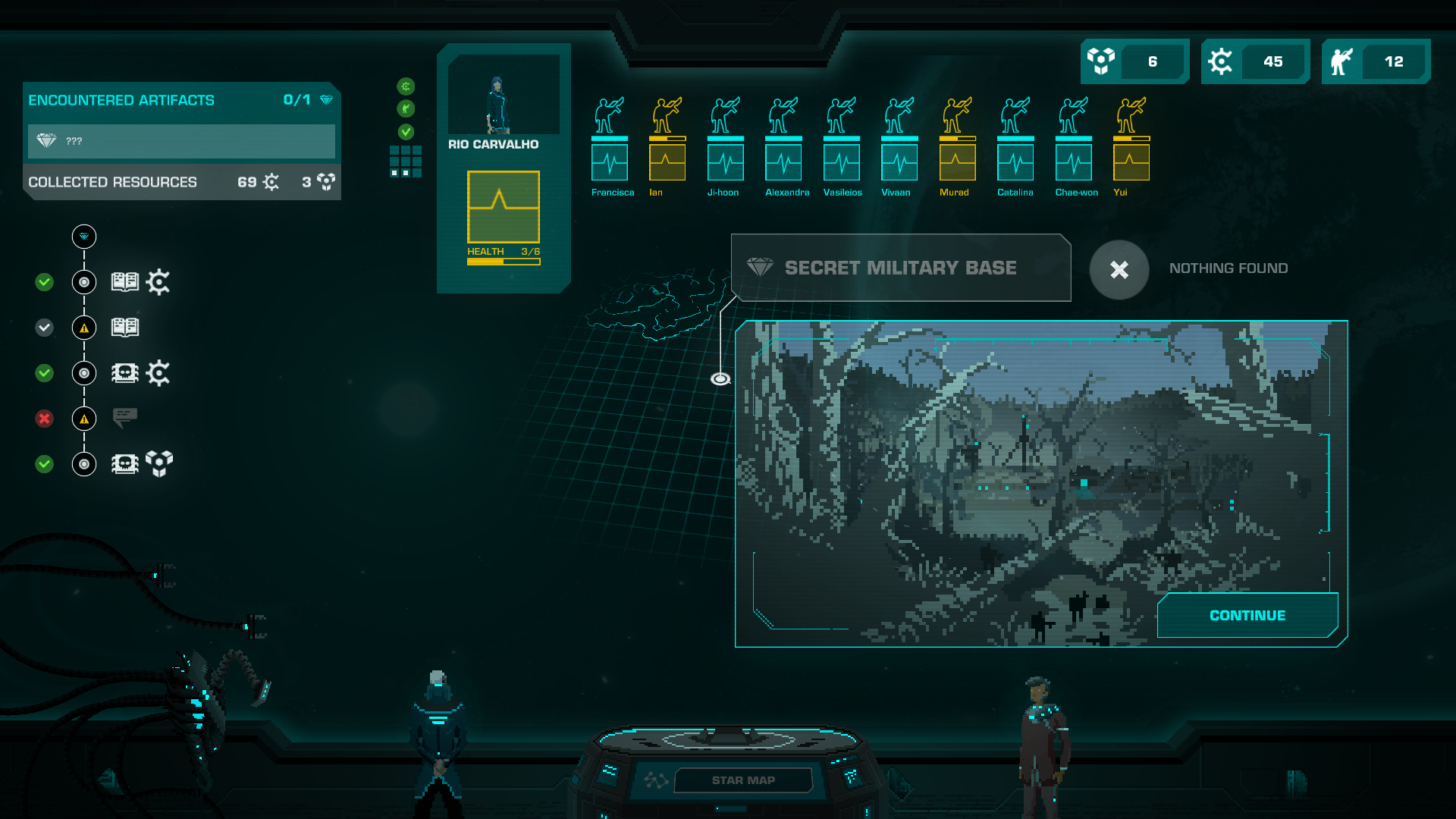 Crying Suns revolves around three separate resources: fuel, scrap, and commandos. Fuel is necessary for continued exploration, and scrap acts as a sort of currency now that the Empire has gone to shit. Commandos allow players to transition from spacefaring missions to those on the surface of the various planets they discover. While you don’t control these expeditions directly, which officer you send to lead the commandos determines the amount of scrap you can hope to find and how many commandos might be lost to terrestrial perils.

At certain points in these missions, the squad can tactically retreat if the losses are too great at the expense of leaving behind either all the scrap you collected up to that point or the commandos who have been injured. These soldiers are mostly faceless grunts that act as a currency all their own, but when I realised one was named Ian, I tried my hardest to ensure they all got home safely.

Because this is a roguelike, however, danger lurks around every corner. Space battles, which play out on a hexagonal grid between the two opposing battleships, start out rather tame but quickly ramp up in difficulty. Several systems need to be monitored during these skirmishes, including the squadrons being deployed, on-board weaponry, and hull strength.

Officers play an important role in these battles, and they can be switched around to different positions on the battleship depending on where they’re most needed, as can fleets of fighter pilots and armaments. Strategy is derived from what objectives are prioritised.

Do you hold your squadrons back in defence, waiting for the enemy to approach your battleship before engaging, or do you meet them in the middle of the map before pushing on to attack the opponent’s flagship? Some of the difficulty also comes from the chaos of battle, wherein tiny ships can often become lost and hard to direct, but the ability to pause the action and get your bearings is helpful in this regard.

The time I’ve spent with Crying Suns has been engaging. I love digging into world-building lore, and the random encounters show promise in the ways they allow players to approach situations like pirate ambushes, civilian disputes, and territorial posturing.

But even with its unique spin on FTL-like mechanics, I’m not sure there will be enough novelty to hold my attention. Like Ellys Idaho and his series of clones, tasked with carrying the mantle of their predecessors, Crying Suns is a too-familiar memory of past adventures.