Saitama is called “One Punch Man,” because that’s all it takes for him to level foes. How the heck does that work in a three-on-three fighting game? Interestingly.

Yesterday I checked out the upcoming One Punch Man: A Hero Nobody Knows at Bandai Namco headquarters. It’s yet another fighting game adaptation of an anime, but with a twist.

Or better yet, a gimmick.

Players can select Saitama for their third slot. They cannot use them before that, and the game has a small window with a timer showing Saitama running to the fighting stage. 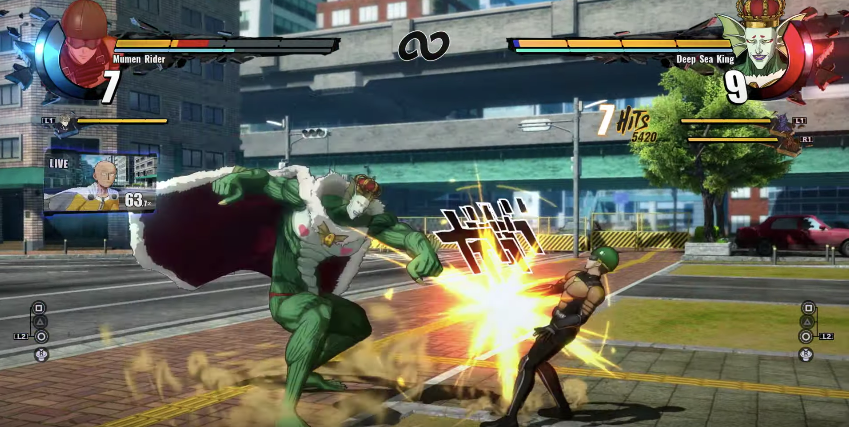 It seemed to take him over 100 seconds to get to the stage. Prior to that, he cannot be switched out, meaning that until he shows up, you’re stuck with only two fighters.

Also, the exact amount of time it takes Saitama to get there depends on the other two fighters you select. So, if you select two strong fighters, it will take Saitama slightly longer to arrive. Selecting two weaker ones means he’ll get there in a somewhat more timely fashion. During the fight, if you are doing well, you can score points that subtract time from Saitama’s clock as he races to the stage.

This is clever. In the anime, Saitama is always late for his fights, so this is a smart way to help balance the character’s power.

The problem is, though, once he arrives, he’ll end the fight in a single punch. He is, after all, One Punch Man. In matches I fought in and watched, it didn’t seem possible for the limited number of characters in the demo to defeat him.

However, if both players select One Punch Man, then they are evenly matched. Conceptually, I really like the idea of how Saitama is used in this fighter. I’m not sure if it would start to feel just like a gimmick after a while or a way to open up deeper strategy.