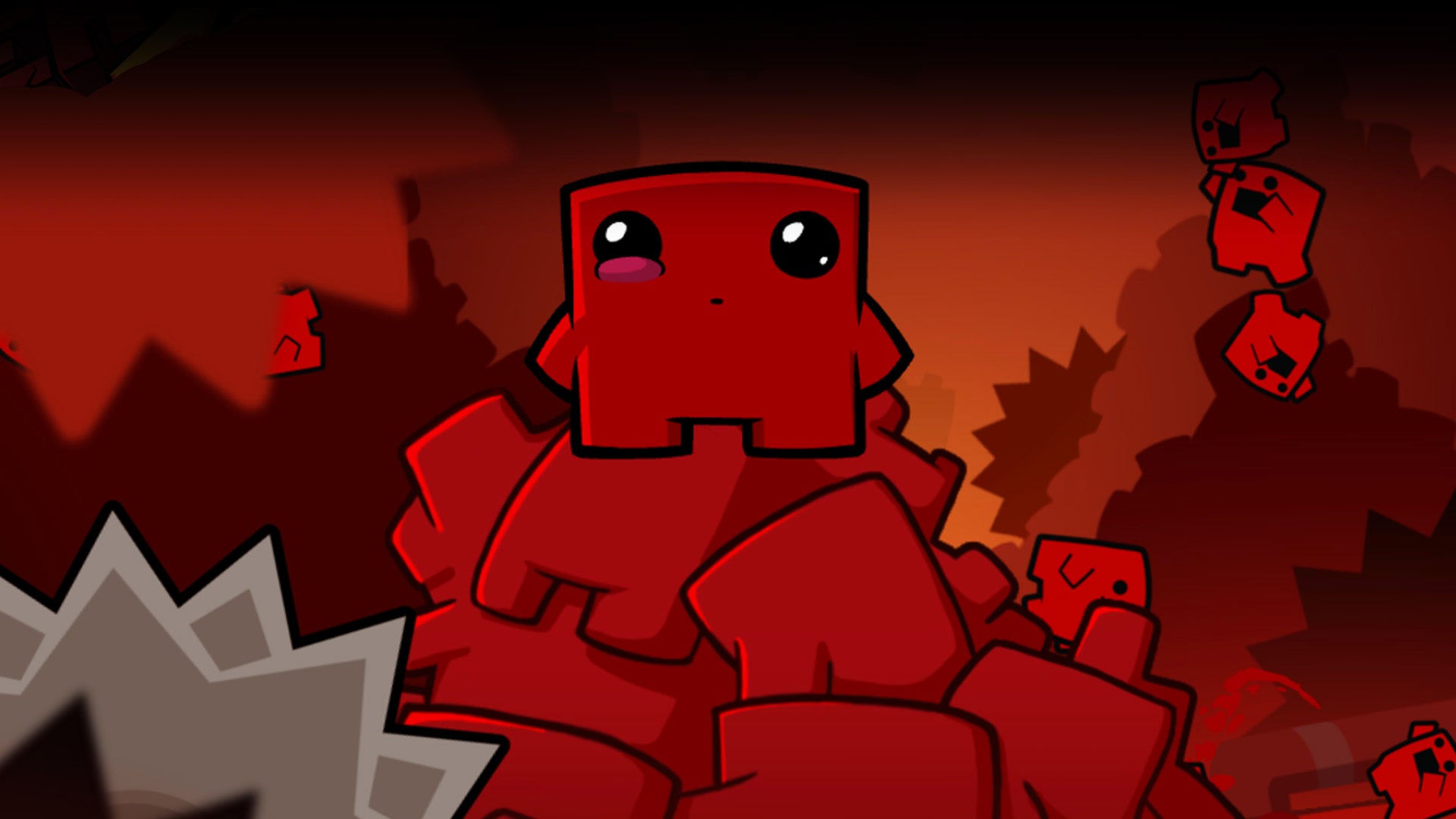 Super Meat Boy designer Tommy Refenes knew that the name Forever was cursed territory in video games. Originally, he wanted to give the sequel to his pioneering tough-as-nails indie platformer a different title: Super Meat Boy ∞, pronounced “Super Meat Boy Infinity.” He decided, though, that it’d have been too confusing.

“I took the curse over the confusion,” he told Kotaku during an interview at PAX.

And what a curse it was. Unlike the most infamous member of gaming’s Forever family, Duke Nukem Forever, Super Meat Boy Forever’s early ambitions were relatively humble.

It was originally conceived in 2011 — a year after Super Meat Boy came out — as a one-button auto runner prototype that was Refenes’ answer to pleas for a mobile version of Super Meat Boy. Refenes and his collaborator Edmund McMillen didn’t start working on it in earnest until 2014, and even then, it was to be a “palate cleanser” ahead of a bigger project.

“We worked on it for three months, and then work just kind of stopped,” said Refenes. “A lot of life stuff happened. I got married. Edmund went through some stuff. He also had Binding of Isaac, which took a lot of his attention. Nobody’s Superman, right? We can’t Doctor Strange clone ourselves and work on things. There were two directions, and we had to figure out how both of us could continue.”

Ultimately, Super Meat Boy Forever wound up on the backburner for a couple years while Refenes and McMillen — one of the indie golden age’s original super duos — dodged and wall-slid through the spike-ridden death trap that is life. McMillen decided to do his own thing, given that Isaac, a time-devouring hobgoblin of a roguelite, had become a phenomenon in its own right. Refenes, however, could not abandon his gap-toothed blood balloon of a meat son.

So, in 2016, Refenes says he and McMillen reached an agreement that he believes was good for both of them — leaving them on relatively good terms, with Refenes continuing to work on Meat Boy. “It’s bittersweet, but Meat Boy continues, Isaac continues. All of these things still exist… We don’t talk as much as we used to. It was just a sign-off kind of thing.”

“I kind of trashed everything that we had and decided that I was gonna go all out — go Kojima on it.”

That gave Refenes space to craft Super Meat Boy Forever according to his own vision, which had by that point expanded from a mobile spin-off into a full-blown sequel with a new two-button control scheme and 7,200 handcrafted levels that dynamically weave themselves into a different whole each time you play. Refenes believes he’s having his Kojima moment.

“I kind of trashed everything that we had and decided that I was gonna go all out — go Kojima on it,” he said. “We literally have almost 50 minutes of cut-scenes. They’re hand-animated. It’s like my Netflix show pilot and a video game, all in one… In a way, it felt more freeing to me, because there’s always been a part of me that wants to write stories and stuff like that. With the [McMillen] collaboration, I wrote little bits of the story, but the first Meat Boy story and how it progressed — that was 90 per cent his thing. So this one was more freeing because it was like ‘OK, I want to do a fucking crazy story with insane cut-scenes, and I want these individual chapters.’”

But over seven thousand levels and a short movie’s worth of cut-scenes don’t just make themselves. The scope of this new Super Meat Boy Forever was unlike anything Refenes had ever worked on before, and he needed a meaty team to match. He now estimates that he’s collaborating with 14 or 15 people, like someone he calls the best level designer he’s ever worked with and an environment artist specifically for cut-scenes. 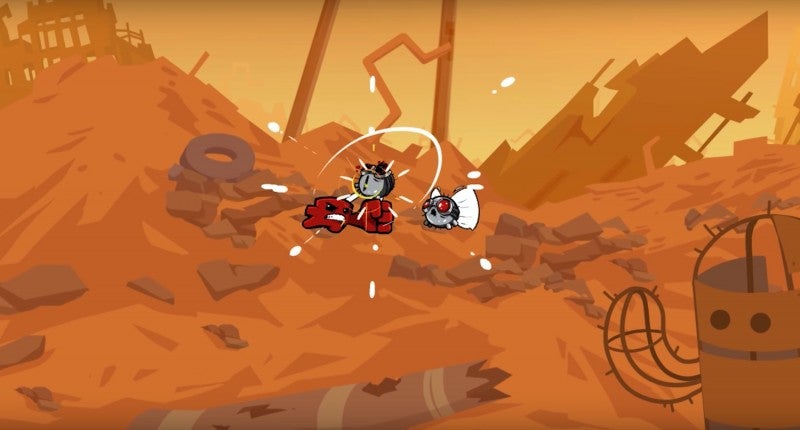 Since 2017, progress has been steady, a change of pace from Forever’s stop-start beginnings. So Refenes figured he could announce a release date.He settled on April 2019, figuring that since he and the team had finished four of the game’s six chapters, the rest would come relatively easily. But then he realised there were still uber-challenging “dark world” levels to account for, and he began to think he might have made a mistake.

“As soon as I made the [release date announcement] trailer and sent it out, I turned to my wife and said, ‘I probably shouldn’t have done that,’” Refenes said.

The proposed release month came and went, and Refenes had to eat crow. Then it dawned on him that, unlike his game’s frantically fumbling protagonists, he could afford to take his time. And so, gaming’s Forever legacy lives on with Super Meat Boy Forever’s new release date: when it’s done (but hopefully this year).

“It was one of those things where it’s like, ‘I’m not gonna kill everybody on the team to make it happen,’” he said. “We’re not taking Kickstarter money or early access or anything like that. I’m not in debt to anybody. So I was just like ‘OK, we’ll just take longer, and it’ll work.’ We’re not hurting financially or anything.”

Part of that financial security can be chalked up to the fact that, on PC, Super Meat Boy Forever is an Epic Games Store exclusive. Refenes and company did not have to weather the gale-force blowback many developers have been forced to endure, having cut a deal with the nascent mega-store before Metro Exodus’ big lightning rod moment.

Still, not everybody was happy at the time, and even more people have voiced their rage since. Refenes, though, is taking it all in stride.

“When it was announced, some people were like ‘Oh, that’s weird,’” he said. “And some people were pissed off. But most of the community was like ‘So?’ They were more like ‘When is it coming out?’ There is a barrier to entry on PC, and it’s your specs. It’s not like every store is like ‘We’re a store with exclusives. Also, all of our games only run on Nvidia Titan graphics cards.’ For the most part, people just don’t care. It might be a little inconvenient, but I honestly feel like people who were not going to buy our game weren’t going to buy it either way.” 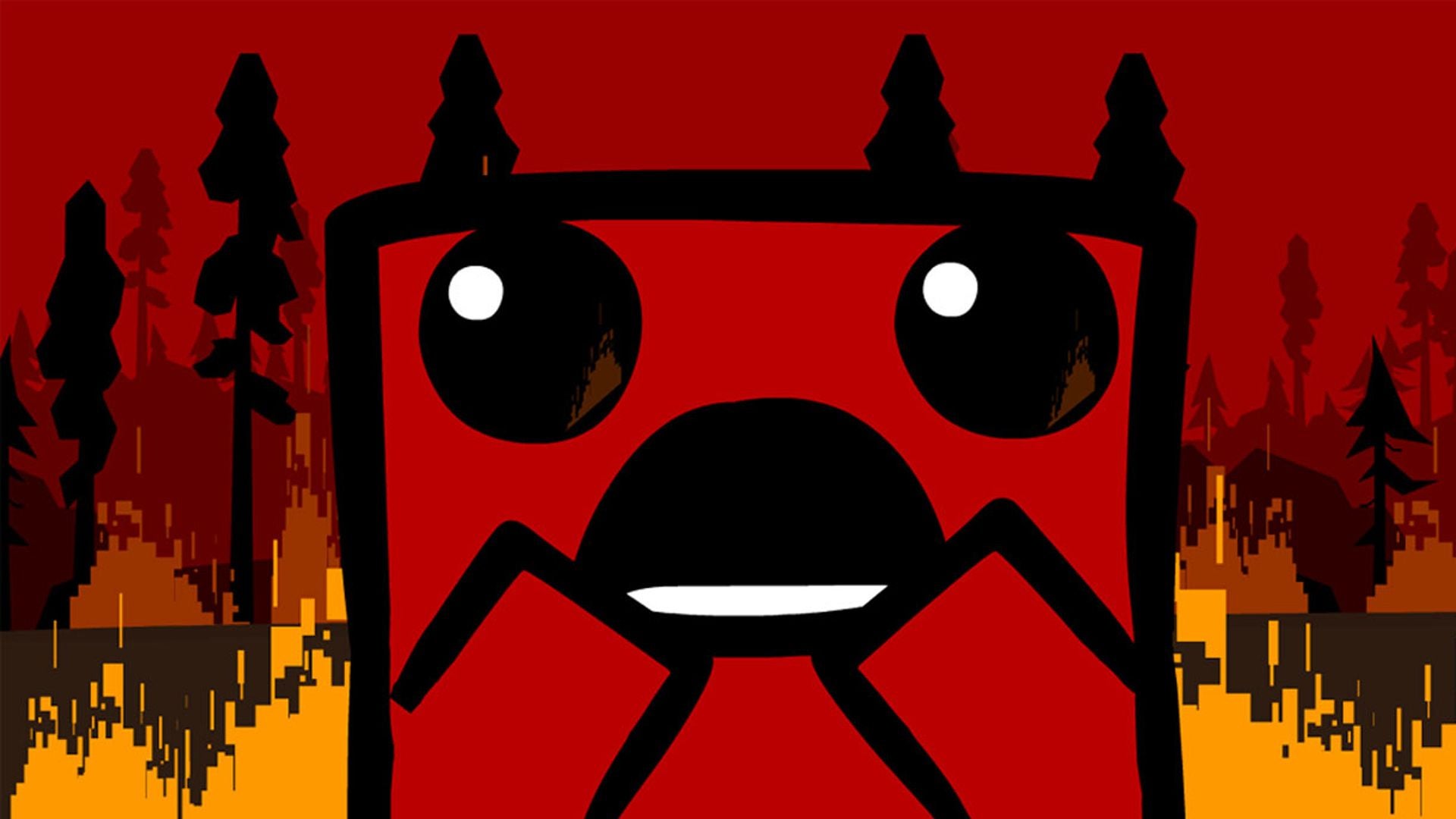 Refenes said he feels a little bad for what he perceives as a small but vocal subset of potential players who’ve spent an inordinate amount of time “screaming into the void” about the Epic Games Store.

“I was young once too,” he said. “I remember feeling those feelings, and I did not have an outlet. But I feel like if I had the internet, I would’ve screamed at Nintendo for not having Sonic. I feel like eventually all of these people will kind of go ‘You know what? That wasn’t worth it. That was a waste.’ That’s just part of ageing and maturing.”

“There is no such thing as the Xbox Live golden ticket anymore. Any indie who’s getting into it right now, there’s just more to consider than I did in 2010.”

Roving gangs of abusive store haters, however, are far from the only new element that characterises the current era of independent game development.

Much has changed since Refenes first started working with McMillen on Super Meat Boy back in 2009. While they were far from the only developers buoying up the scene at the time, the two became faces of the late-2000s indie boom thanks to their star turn in 2012 documentary Indie Game: The Movie, as well as the smash success of Super Meat Boy.

“It’s especially strange with the movie and everything,” Refenes said. “I’ve been recognised at Starbucks. It’s weird to have people tell me ‘You inspired me to make games.’ I always joke like, ‘Oh, I’m so sorry.’”

Now, a decade later and still working on Meat Boy, Refenes can only marvel at how far his corner of the industry has come.

“I remember it used to be a struggle to get eyes from higher-ups,” he said. “With Microsoft, it was a battle to get our Xbox Live Arcade deal [for the first Super Meat Boy]. I had to leverage a potential Sony deal to get them to say yes. These days, I’m in an elevated position because of Meat Boy, but still, now you have stuff like Nindies, you have Xbox with their indie events, Sony has all their events. That used to be unheard of. It’s very different.” 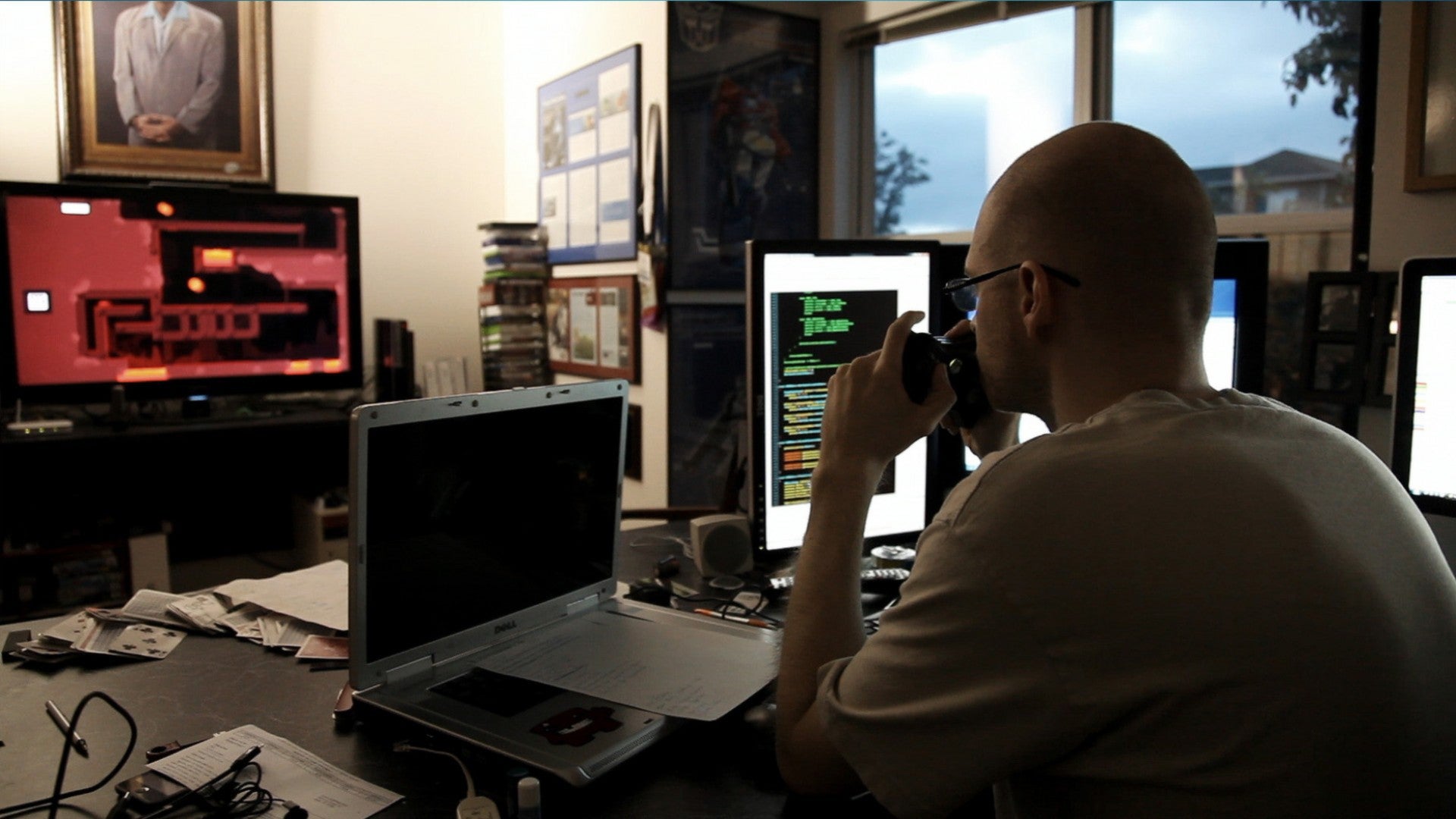 The video game landscape is also much more crowded than it was back when Refenes and McMillen breathed digital life into a pile of meat, and countless games — some of them quite good — slip through the cracks. Refenes acknowledges that things are definitely more precarious for aspiring game makers, but he also views the industry as healthier overall.

“I think it’s better,” he said. “You know, there’s an influx of people making games. You can be like ‘Oh, it’s going to be an indie bubble,’ but we’ve been saying that’s going to happen for, like, five years, right? I think overall it’s a good thing to have more. The industry has matured beyond it only being Modern Warfare 2 or whatever. You get crazy mega hits like Stardew Valley and all this stuff that could not have broken through on, like, GameCube or even the Xbox 360.”

Refenes restated what many before (or technically after) him have said: Now you’ve got to treat even small-scale game development like a business if you want to have any chance of success.

“There is no such thing as the Xbox Live golden ticket anymore,” he said. “Any indie who’s getting into it right now, there’s just more to consider than I did in 2010. 2010 was ‘Get the game done, and if it’s a good game, it’ll sell well.’ I still believe good games sell well, but it’s also a thing where you need to make sure people know about it, and you need to fight for visibility.”

Even then, there’s no guarantee. Refenes recognises that he was in the right place at the right time back in 2010, and for that, he said, he’s extremely grateful. All he can do now is use that fact to help him keep things in perspective as he continues to make games.

“If I was starting out now, it would be a much harder uphill battle for sure,” he said. “I already have millions of Meat Boy fans, and while I don’t feel guilty about it, I’m always like ‘I have this easier than a lot of people. Way, way easier.’”