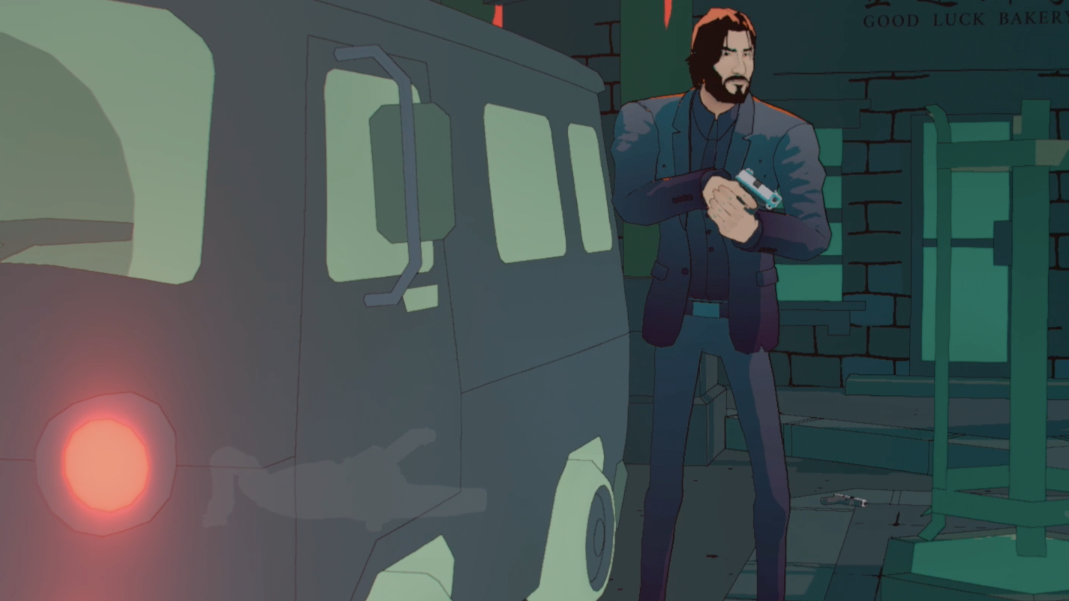 In the John Wick movies, the titular character is not superhuman. He is bound, like all of his enemies, by the laws of physics. When he gets hit by a car, you see the effects of it on his body. By the end of fights, he is often limping and bleeding. When he gets stabbed, he needs stitches. He gets through all those impressive fight sequences because, to paraphrase Peter Stromare’s character in the second movie, he is dedicated and focused. John Wick Hex allows you to be that kind of man. It’s both compelling and deeply difficult.

What does it take to be John Wick? It takes planning. The most important thing to pay attention to in any level is the timeline on the top of the screen. Every action takes time: crouching, standing back up, setting up and firing a shot, reloading, dodging, striking an enemy.

Each action is represented on that timeline, which progresses as Wick moves throughout the level and shoots guys in the head. Time only moves forward once you have selected which action you’re going to do. As Wick inches forward, he moves across a hexagonal grid, and so do your enemies. 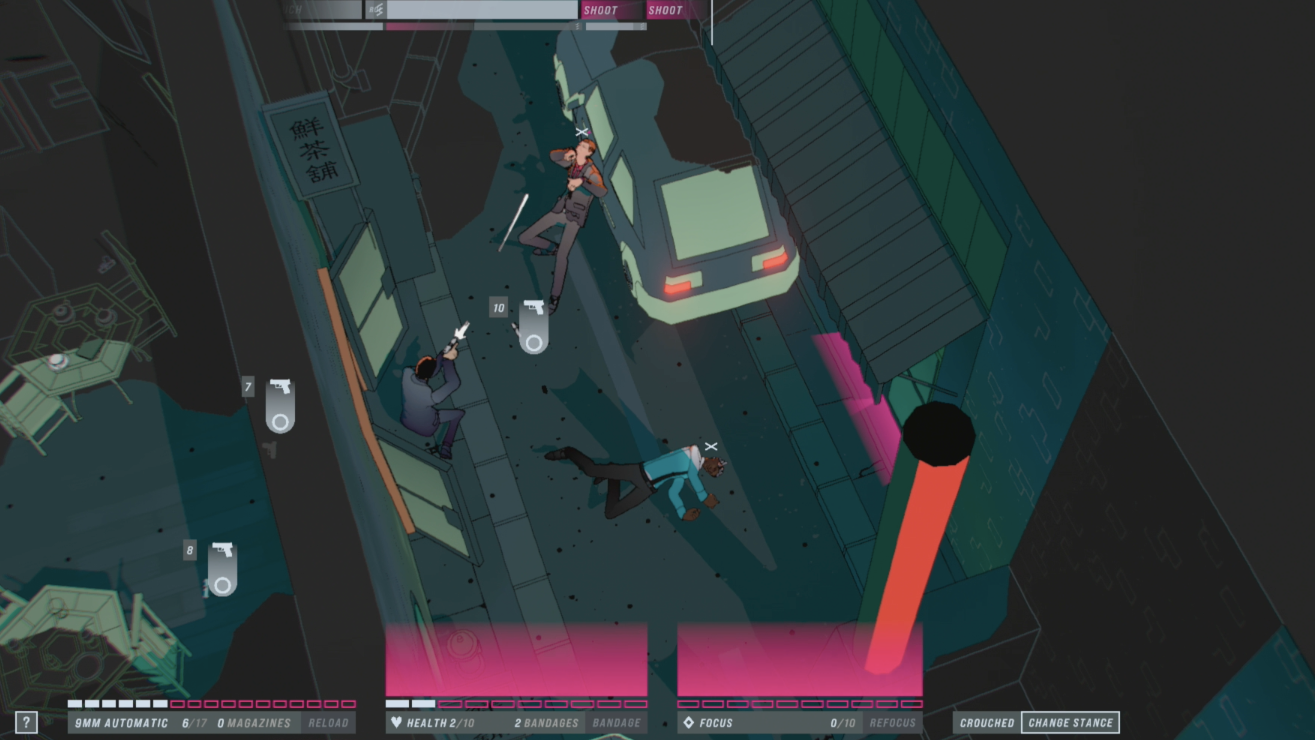 All of the enemies’ actions are also represented on that timeline as well, allowing Wick to plan around their actions. If you’ve got a brawler up close, but a guy with a submachine gun far away, you can use this timeline to figure your way out of that encounter. Maybe you’ll dodge, throw your gun at the SMG guy, take down the brawler, and then pick up a gun on the ground to finish off the enemy farther away. Or, maybe you’ll crouch and roll out of the way of gunfire, find cover, shoot the brawler, and then melee the other guy once you’ve cleared the distance.

If you’ve ever used film editing software, this combat system will probably make an innate kind of sense to you. Learning the language of this game took me back to college, when I poured over Final Cut timelines all night, matching up multiple timelines of sounds and visuals frame by frame. John Wick Hex has the isometric angle and turn-based vibe of strategy games like XCOM, but the focus on choreographing a fight’s timeline makes the player more like an action movie director than a battle commander.

To further emphasise the movie-making angle, after each level you can watch a replay of your successful run, animated as if it were a movie scene. It’s funny (if a little depressing) to watch something that you meticulously planned over more than an hour play out in a couple of minutes.

Along with bars that measure his health and ammo, John Wick also has a “focus” bar. Melee attacks use up focus, and while refocusing during battle doesn’t cost any resources, it eats up precious time. If you’re low on focus, your shot probability will go down. This makes Wick more vulnerable, as he will be less able to thin out the crowd of enemies. The focus bar is yet another example of how crucial it is to plan ahead, especially when there are multiple enemies all making their way towards you.

Should you use a take down on that enemy without a weapon, knowing that it will leave you out of focus and thus make it harder to shoot the other enemies? Or should you use your last focus to roll into cover, refocus, and then engage from there? Sometimes, risks pay off. More than a few times, I’ve had my arse saved by sheer luck. For the most part, though, playing cautiously wins out.

In addition to planning based on time, you also have to control space. Fighting around and with enemy bodies becomes as important to consider as your health and the number of bullets you have left. In Hex, only the parts of the level in John Wick’s line of sight will be visible to the player, the rest shrouded in a black fog of war. If you’ve just seen an enemy and can’t anymore, you still generally know where they are, and the game helpfully pauses whatever action you’ve taken if a new enemy comes into view.

Some melee moves will move Wick or enemies around the space, allowing Wick to only be selectively visible to enemies who are trying to shoot him. Once you break that eyeline, the enemy’s “shoot” action disappears from the timeline. It makes sense; how can you shoot something you can’t see?

Dancing in and out of that field of vision frequently made me feel like a super genius. I had encounters where there’d be a pillar or other cover in the middle of a room, and I’d trail enemies around it in order to take them out one by one. One level, set in an art gallery with statues that sat upon hexagonal pedestals, felt like choreographing a violent ballet once I got the hang of it.

What complicates this is that John Wick Hex also emphasises how mortal Wick is. Each level is separated into six or seven stages. At the start, you have a custom handgun with an additional magazine and two bandages. Each bandage gives you a full heal, but when it’s gone, it’s gone, and you don’t regain any health between stages. The same counts for magazines, and in that case, if you reload a magazine when you still have bullets in your gun, those are gone for good, and you will not get more.

Most levels allow you to plan in advance, using gold coins to select stages where you want to stash an extra bandage or gun. Even with those advantages, the way that Hex asks the player to conserve health items and bullets means that each potentially fatal encounter becomes that much harder. 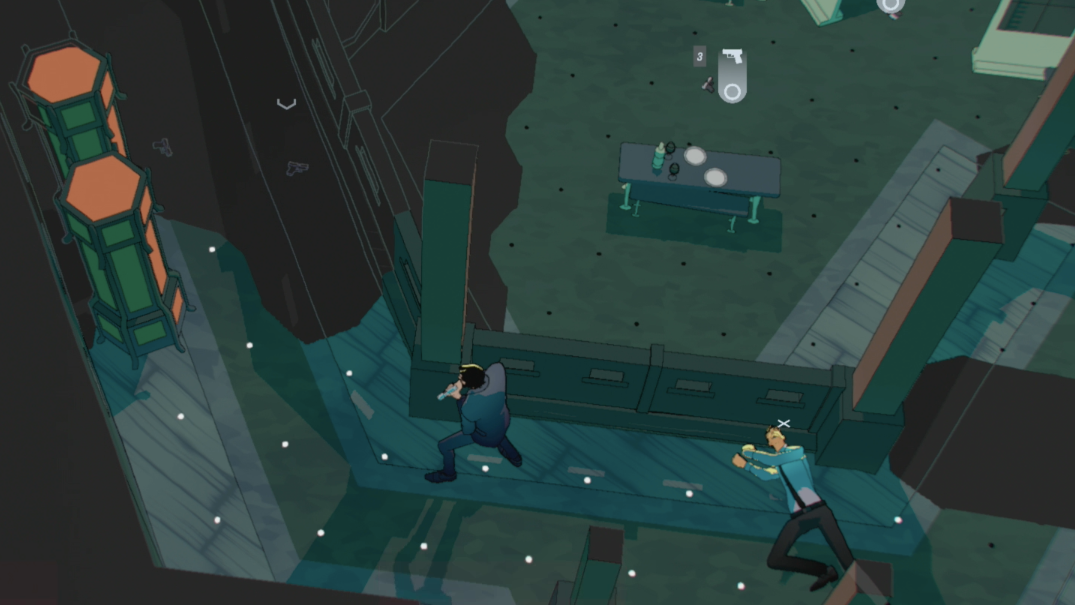 There are a dozen ways out of each conflict, and the only way to figure out the most optimal one is to repeat each level again and again and again. I’ve often gotten to the end of a stage in a state that would leave me at such a big disadvantage for the next one that I’ve gone back and restarted so that I can preserve a bandage or make it out of the stage with more health. Once I got all the way to a boss character, but I had no bandages and almost no health. Try as I might, I couldn’t finish the level in that state. I had no choice but to start over from the beginning.

The way these systems intersect creates a fun puzzle, most of the time. There have been a few instances where I’ve had to question whether or not the difficulty spikes are a result of good level design or rather a case of “just more guys.” As you progress through the game, enemies get tougher. Early on, you face brawlers with two health points and other guys with 9mms and limited magazines; later, you fight martial artists who need six hits to go down and guys with shotguns and submachine guns. Most of the time, you can puzzle out the correct way to use your limited bullets, focus, and health. Sometimes, it’s not so much a puzzle as an onslaught.

The level where I’m currently stuck has Wick escaping from a bank vault. The earlier stages are hard enough that by the time I get to the halfway point, I’ve used all my bandages. At the very end of one particular stage in the level where I’m stuck, I need to call in an elevator. The stage itself is physically small, meaning that creating distance and using cover is paramount.

The limited space also means that doing those two things is very hard. How do you create space where there isn’t any? To make matters worse, once that elevator arrives, five fucking guys hop out of it, and they’re five of the strongest enemies the game has to offer. I have played the game for a little over ten hours. I’m on the third to last level, and a good third of my gameplay has been dedicated to getting out of that particular stage without getting murdered by the people in the elevator. Try as I might, I cannot do it. 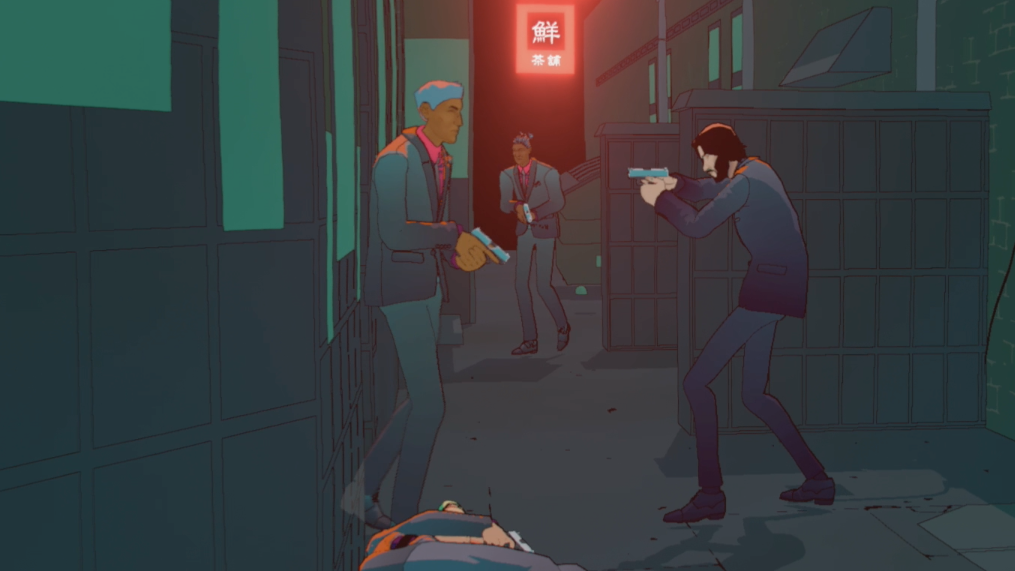 I am sure that I’ll return to this stage tomorrow and I’ll have figured out the trick to it. Maybe other players will get there and figure out the puzzle faster than I have, or slower. In any case, most of the time when you fail in John Wick Hex, it’s your fault. John Wick is very good at murder, but he’s just a guy. Most guys would also die when they’re being punched in the head by two other guys and shot at by yet another.

John Wick Hex’s ultimate goal is to get you to think in the way that John Wick thinks, to see a hallway full of people with guns and be able to figure out how to tunnel through them.

Being crowded like that is par for the course in the film franchise. But those are deliberate encounters, staged and choreographed by professionals to ensure Wick comes out on top. As the game got harder in the back half, I’d think to myself in frustration, “John Wick would be able to get out of this,” as I failed a level over and over, and then reply to myself, “Yeah, well I’m not John Fucking Wick. I’m Gita Jackson, and I’ve never murdered anyone with a pencil, let alone two people!” (Sadly, pencils are not a weapon available to John Wick in Hex.)

Even in my moments of frustration, I do feel compelled to figure out even the most irritating stages and levels. John Wick Hex is impeccably designed. The basic aspects of its gameplay are so consistent that, whenever I fail, I usually only have myself to blame. I want to be able to finish it, but its late-game difficulty has given me pause. Being John Wick is a nigh impossible task, but I guess that makes sense. There’s only one Boogeyman, after all.