Little Town Hero for the Nintendo Switch is a Game Freak role-playing game about a young boy who’s charged with fighting a bunch of viciously powerful monsters as adults stand idly by. No, not that one. Little Town Hero is totally its own thing: a deceptively simple RPG-card-game hybrid with light tactical elements that manages to be addicting.

My co-worker Joshua Rivera joked that my taste in games was “hardcore,” politely clowning me for gravitating toward games about “anime and maths,” so it was no big surprise that Little Town Hero is my cup of tea. In it, your protagonist, Axe (or whatever you name him), fights off monsters suddenly invading the town using the power of a mysterious gemstone he found in the nearby mines.

He’s guided by the irresponsible knight who was previously sent there to fight the monsters but hurt his back and now spends too much time in the tavern. The townsfolk must figure out the mystery of how these monsters are getting into the village in the first place. How does Axe fight these ferocious beasts? With the power of ideas. 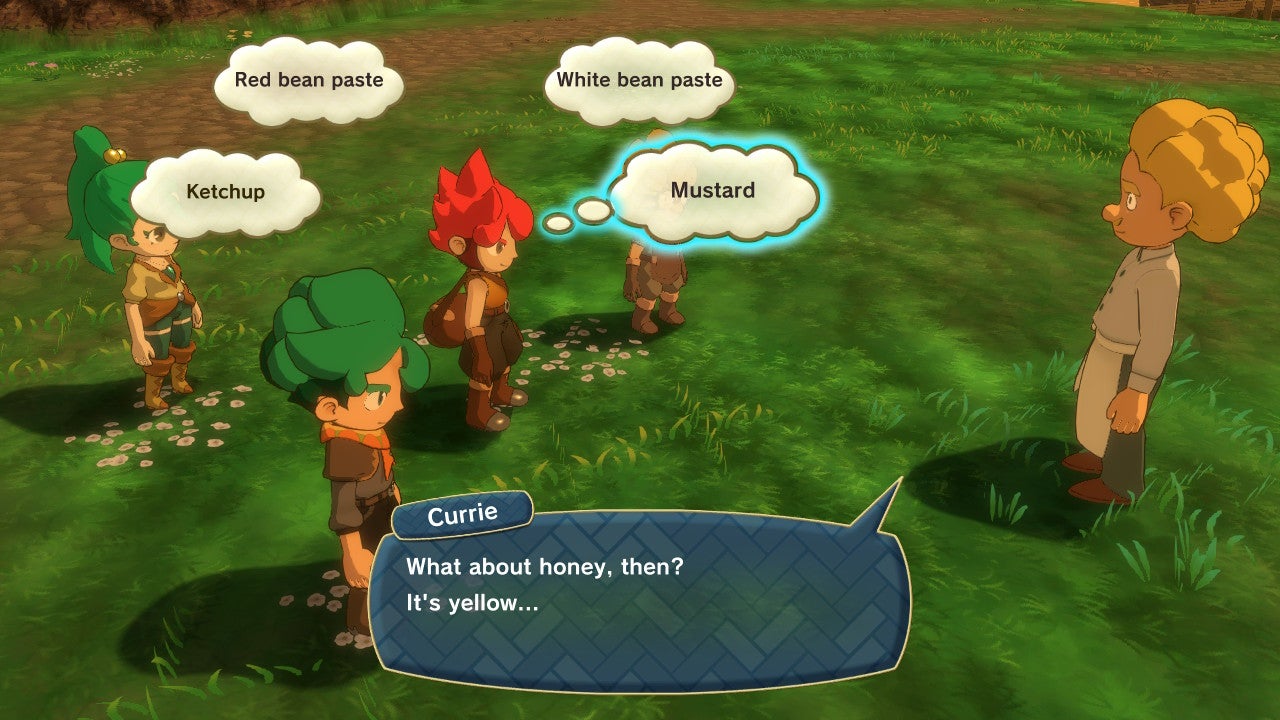 Little Town Hero’s battle system revolves around ideas charmingly called “Izzits” which function like cards do in card-battle games. You can hold up to five at a time, while others remain in your Headspace to be summoned to the front of mind when space opens up. You have a set amount of “Power” each turn that you can use to turn Izzits into “Dazzits,” or usable moves. There are three types of Dazzits: Blue Dazzits, which have an immediate effect on yourself, your opponent, or both, Yellow Dazzits, which can be used again and again until they break, and Red Dazzits, which can be used once per turn or until they break and can be used to inflict damage directly on your enemy when the opportunity arises.

Most involve attacking or defending with your pickaxe-shield weapon, but some involve picking up rocks or throwing a firecracker, for instance. Both you and your enemy have health represented as hearts, as well as “Guts,” a buffer that must generally be broken before you can inflict direct damage. It’s important to be careful about how you do this damage, because several enemies have powered-up states they go into when their guts are reduced to zero. After direct heart damage, guts are restored. 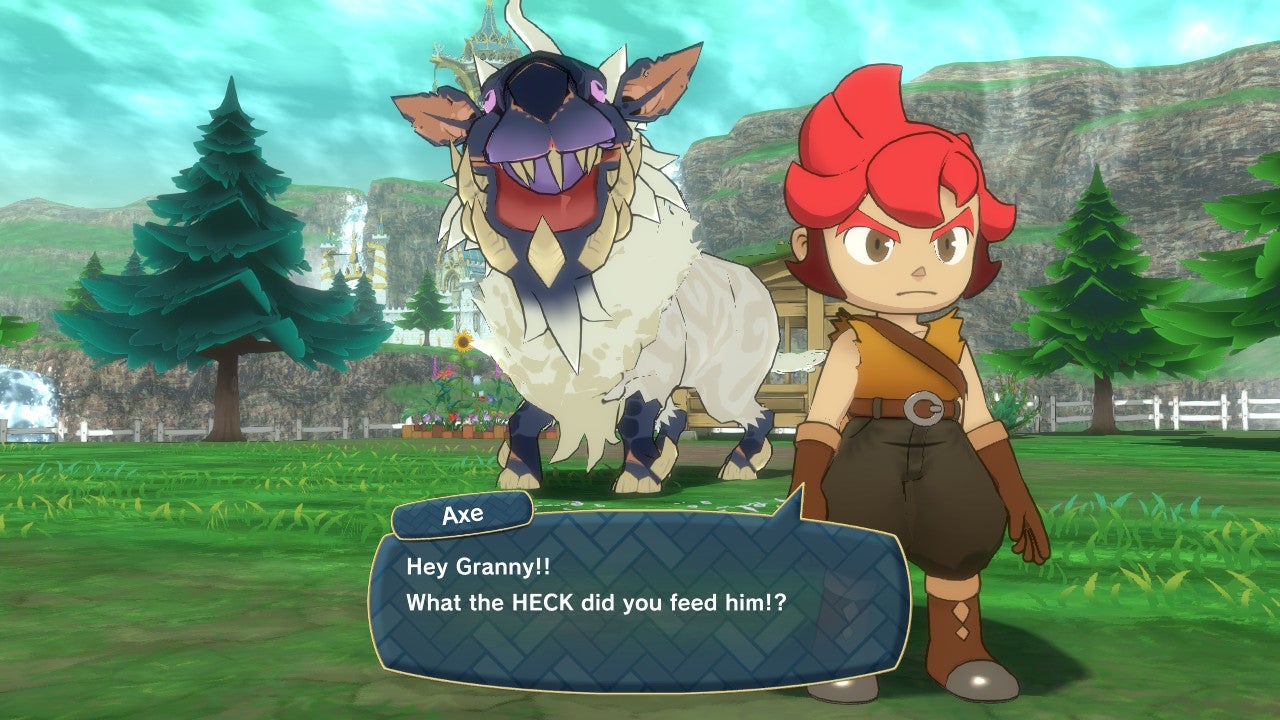 The core of the gameplay is simple, but there are a lot of ways to use the finite tools at your disposal, meaning that there’s a lot of predicting and planning and customising you can do when it comes to your actual playstyle. You always see your opponent’s available Dazzits and the particular one they’re using each turn, which guides your strategy. I’m using a high-risk high-reward playstyle, taking opportunities to gamble by sacrificing health in order to make big plays on my opponents.

The combination of Red, Blue and Yellow Dazzits allows a static set of moves to be mixed and matched in a variety of different ways, especially once you start powering them up and unlocking new effects. The key to winning the game is breaking your opponent’s Dazzits to score a direct hit. Taking direct damage yourself automatically restores all your used-up ideas, which keeps the matches from becoming too one-sided at any given time. The game is easy enough for anyone to pick up but has a lot to offer a fledgling min-maxer. 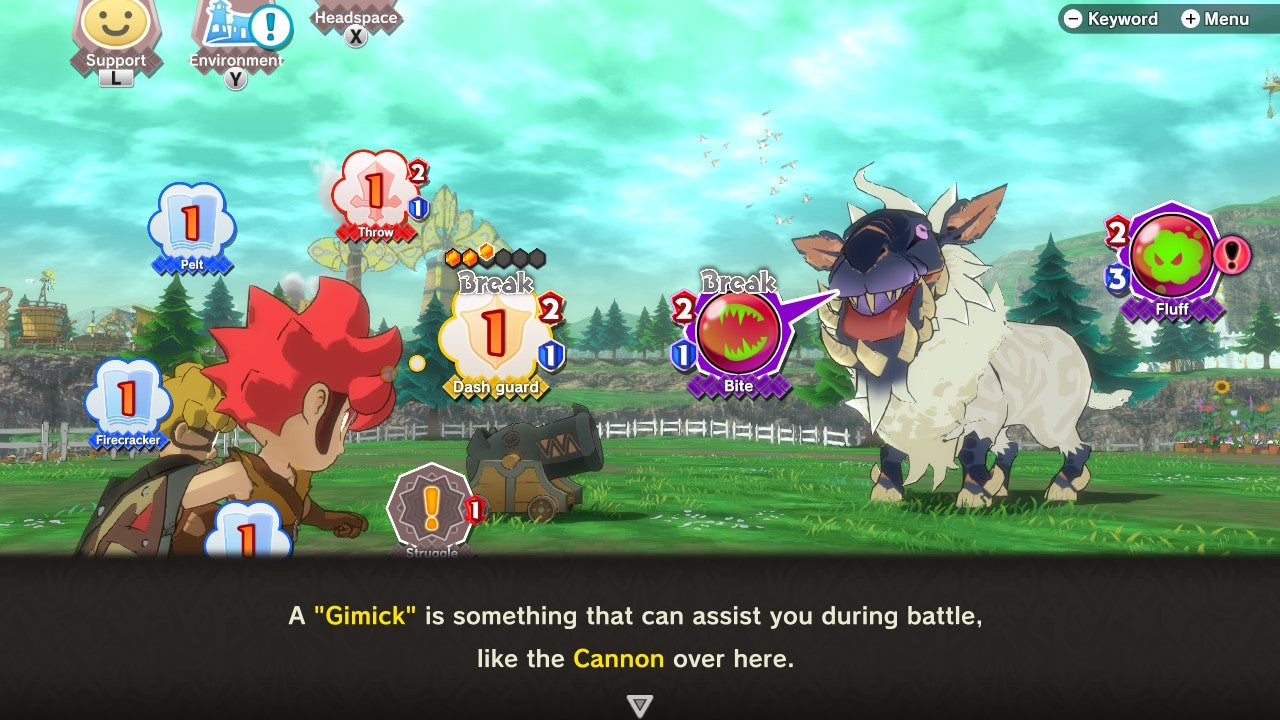 Between turns, you move around on a party-game-style map. On this map are other townsfolk, who can give you bonuses. Axe’s buddy Nelz, for example, reduces the cost of turning one random Izzit into a Dazzit to zero. His rival Matock can do direct damage to the opponent’s body, regardless of its Dazzits. There are a variety of townsfolk ready to jump in and support this small child battling monsters, and you can find more via sidequests and story progression. Some of them offer inspiration for new ideas mid-battle.

There are also environmental effects called “Gimicks” you can tap into if you have the right Dazzit. For example, I’ve taken on a very aggressive play style, so I enjoy strategically using the Barrel which does direct damage to both your and your opponent’s Dazzits and body, strategically sacrificing some of my guts to go ahead and deal heart damage to an energy. There are lots of these options to explore and thus lots of strategies to mess with during the battles, which can easily take 15 or 20 minutes a pop, if you’re like me and enjoy mathing out every possibility. 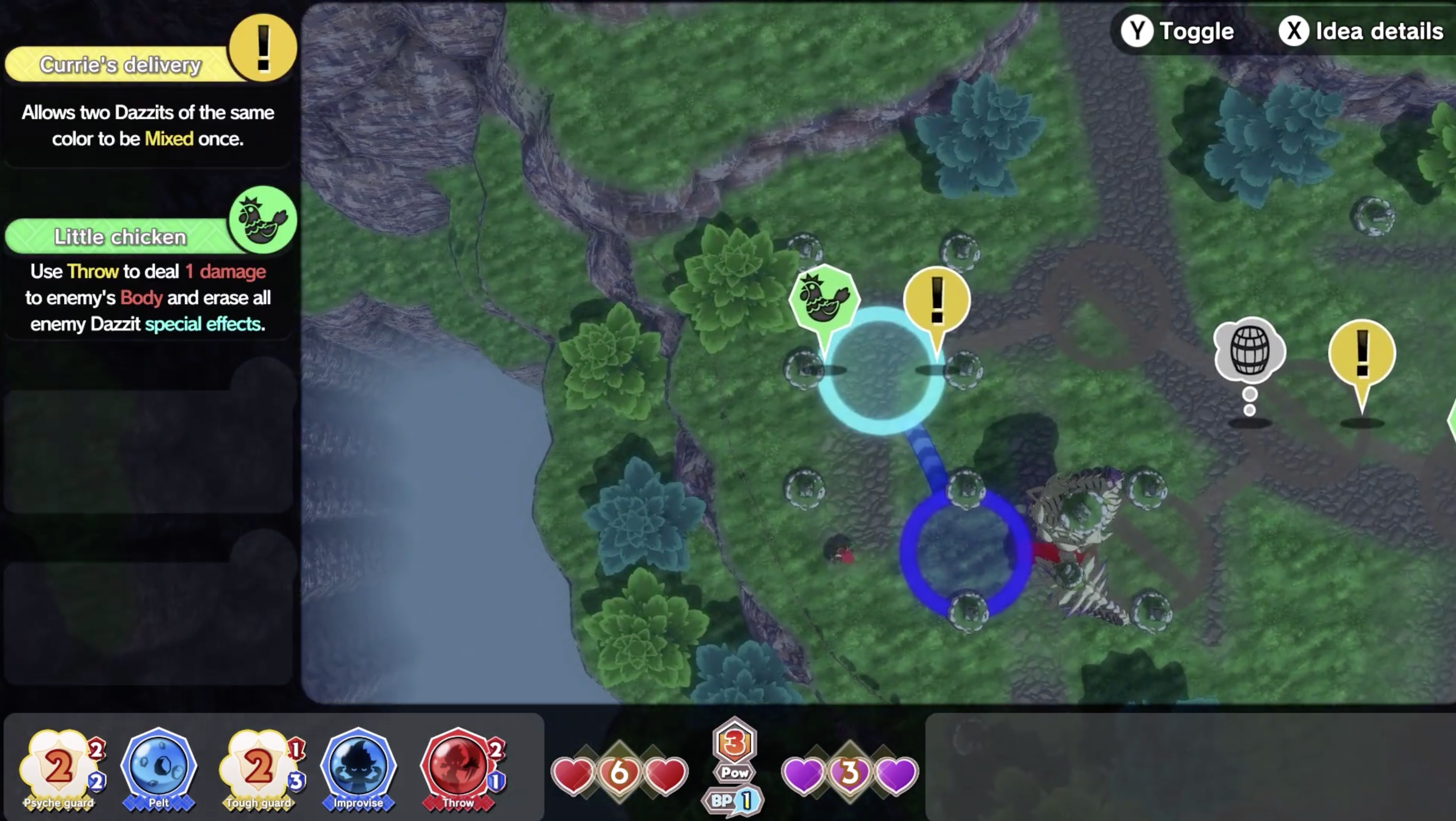 You may be wondering what you do between battles. You can take on sidequests to get to know townsfolk and gain rewards like Eureka Points, which you can then use to upgrade your Dazzits or increase your Guts on an upgrade grid. This adds a nice, if light, layer of customisation to the game. You also fight Matock… a lot. And just like other Game Freak rivals, he is both relentless and unperturbed in his endless quest to get his bell rung by the protagonist, over, and over, and over, and over again.

One chapter of the early game had me fight him three times, pretty much consecutively. I didn’t mind so much, since the battles changed slightly each time, but, man. The sidequests and between-battle moments are charming and provide some colour for the town and townsfolk you fight so hard to protect. It’s banal but makes complete and total sense within the game’s themes of small-town fellowship, and it’s wholly inoffensive when punctuated by the solid battles you get to think through. 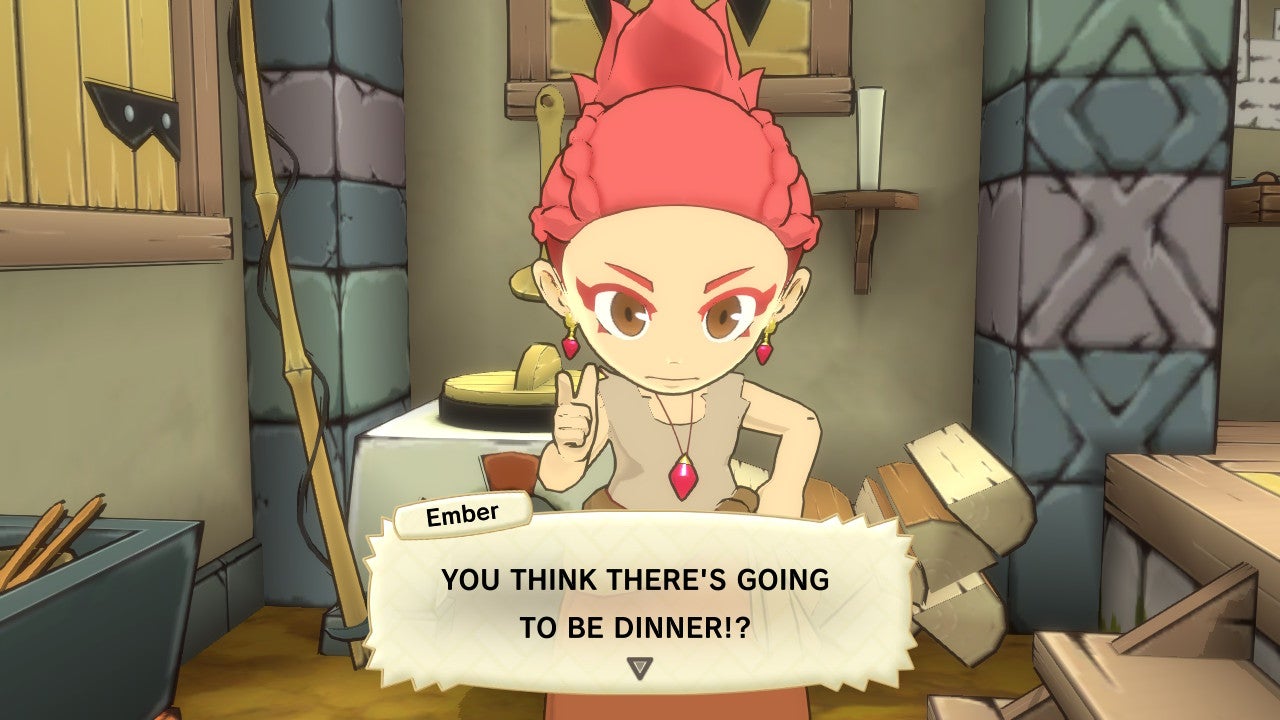 Like the little town Axe works so hard to protect, Little Town Hero is straightforward and earnest. Comical moments between characters and a Toby Fox-made soundtrack keep the boring parts manageable, and the battle system’s mix of a simple core with a variety of ways to execute makes the game work. You have a finite level of actions you can take and a clear layout of your enemy’s attack options. It’s the type of game that makes you feel clever for doing exactly what it’s designed to allow, and that’s always a great time.