Here’s All The Star Wars: The Rise Of Skywalker Spoilers!

The final chapter in the beloved Skywalker saga is finally here. Many of you will be desperately trying to avoid online spoilers until you’ve seen the movie. Others will be actively hunting down and devouring every plot point.

This article is for the latter group. (Spoilers ahead, obviously.)

If you want to go into Star Wars: The Rise Of Skywalker spoiler-free, STOP READING THIS ARTICLE NOW. Below, we will be breaking down all the major plot points. This is your final warning.

Now that’s out of the way, let’s get stuck into the spoilers!

Star Wars: The Rise Of Skywalker kicks off with a traditional space crawl. We learn that Emperor Palpatine – the Big Bad from the original trilogy – has come back to life. Or maybe he was never dead? Either way, he has informed the whole galaxy that he’s back in business and ready to rumble.

Kylo Renn, the newly christened Supreme Leader of the First Order, is hellbent on tracking Palpatine down – not to join him, but to terminate a perceived threat to his leadership.

We then cut to a poorly choreographed slow-mo fight scene between Kylo and a bunch of alien henchmen who are guarding a mysterious gizmo. This is the ‘Sith Wayfinder’ – basically, a plot device/MacGuffin that acts as a GPS to Palpatine’s secret home world.

After seizing the Sith Wayfinder, Kylo heads to the Sith home world and confronts Emperor Palpatine. Surprise, surprise, they decide to join forces. Turns out Palpatine has been pulling the strings all along and had been using Supreme Leader Snoke (the bad guy from the first two movies) as a puppet. 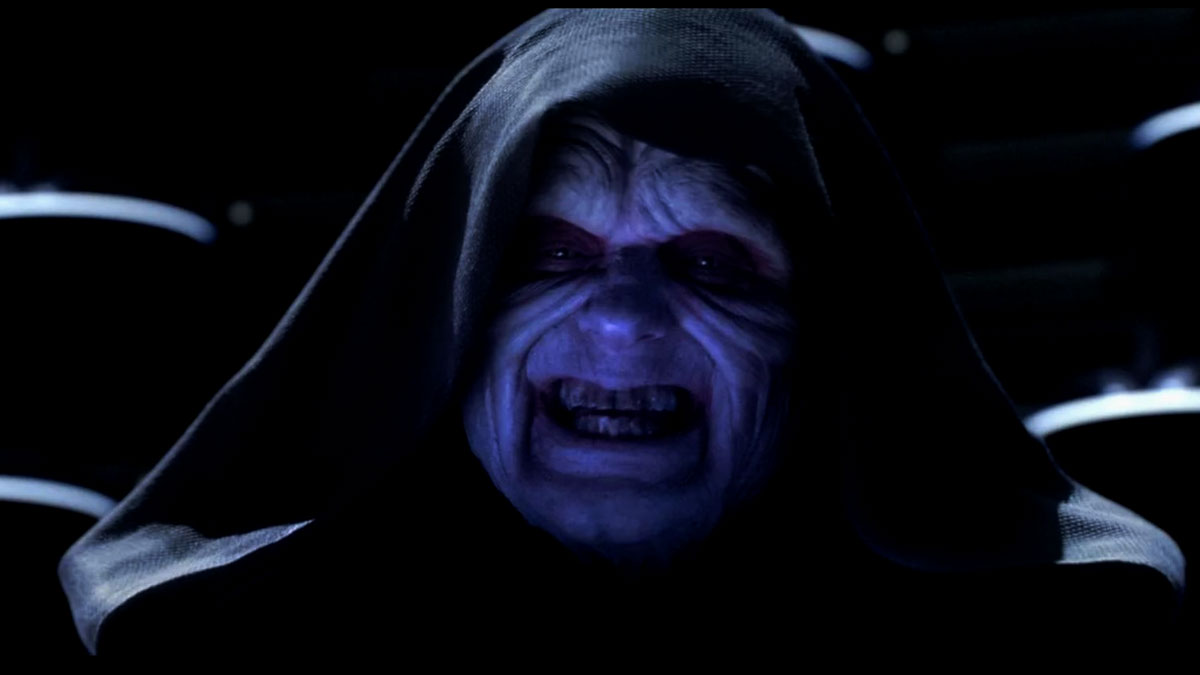 The OT gangster is back! Back! BACK! (Photo: Lucasfilm)

Palpatine offers Kylo an armada of Star Destroyers equipped with the destructive capabilities of Death Stars. In return, all he has to do is kill the resistance fighter and series heroine Rey.

We then rejoin Poe and Finn in the middle of a reconnaissance mission on the Millennium Falcon. They receive word of Kylo’s plans through an anonymous spy in the First Order and are immediately attacked by a bunch of X-Wings. Poe “light skips” to a bunch of different planets via hyperspace in a bid to escape the pursuers. At one point, they almost get eaten by a giant sand worm on the planet Arrakis. (At least, that’s what it looked like to me.)

Meanwhile, Rey is continuing her Jedi training with Princess-sorry, General Leia, who is far more Force-sensitive than we thought. Later on, we even get a flashback of her training with Luke between the events of Empire and Jedi, which is pretty cool.

While parrying laser blasts from one of those floating, spinning droid things, Rey loses her temper and accidentally damages BB-8. (More Dark Side foreshadowing!)

Poe and Finn return with the stolen intelligence and it’s clear they both dig Rey, leading to an extremely underdeveloped love triangle. The gang decides to attack Palpatine, but first they need to find a Sith Wayfinder of their own. Apparently, Luke told Rey all about Wayfinders and the secret Sith World off-camera during the previous movie. This seems extremely cheap to us, but eh, let’s go with it.

With Chewie and C-3PO in tow, the team head to a planet of dancing arseholes which supposedly contains a clue to the Wayfinder’s whereabouts. In other words, they’re now searching for a secondary MacGuffin so they can find the primary MacGuffin. Mmkay.

Lando Calrissian shows up out of nowhere and tells them what direction to go in, before promptly buggering off again. (It’s the Calrissian way.)

After implausibly falling through quick sand into an underground cavern, the gang discovers the clue they’ve been searching for – a knife inscribed with Sith coordinates to the Wayfinder. In a left-of-field twist, Rey discovers via flashback that this very same knife killed her parents.

There’s also an injured giant snake in the cavern, who Rey heals with Force power. As you do.

Unfortunately, C-3PO is the only member of the gang who can read Sith, but his programming forbids him from speaking the translation aloud. As luck would have it, Poe knows a guy called Babu who can extract forbidden data from droids, so they head off to the planet he lives on – but not before getting attacked by the First Order.

While Rey is battling Kylo Renn, Chewbacca gets captured and tossed into a prison ship. Rey attempts to stop the ship from flying away with the Force, but this inadvertently causes it to explode into a million pieces. Oh nos! Another original trilogy character bites the dust!

Except it’s another Star Wars fake out. Chewie was actually being held on a different enemy ship. He’s still alive, but the heroes don’t know it yet.

The gang dejectedly heads to the aforementioned planet and meet up with Babu – a Muppet that looks like it cost approximately 60 cents to slap together. An old acquaintance and implied ex-lover of Poe’s is also on the planet, but she doesn’t really do much. They also recruit a new droid who attempts to out-cute BB-8. (He’s no Baby Yoda, though.)

Babu succeeds in extracting the coordinates from C-3PO’s noggin, but this causes his memory to be wiped. Cue lots of “R2-D2! Pleased to meet you!” nonsense for the duration of the film. Meanwhile, the First Order has tracked down the gang’s general whereabouts and are searching for them on the planet. This allows Rey to sense that Chewbacca is still alive so they break into the Star Destroyer and stage a daring rescue.

Finn, Poe and C-3PO are all captured and sent off to be shot. At the last minute, they are rescued by… wait for it… General Hux. (AKA Kylo’s snivelling second-in-command.) 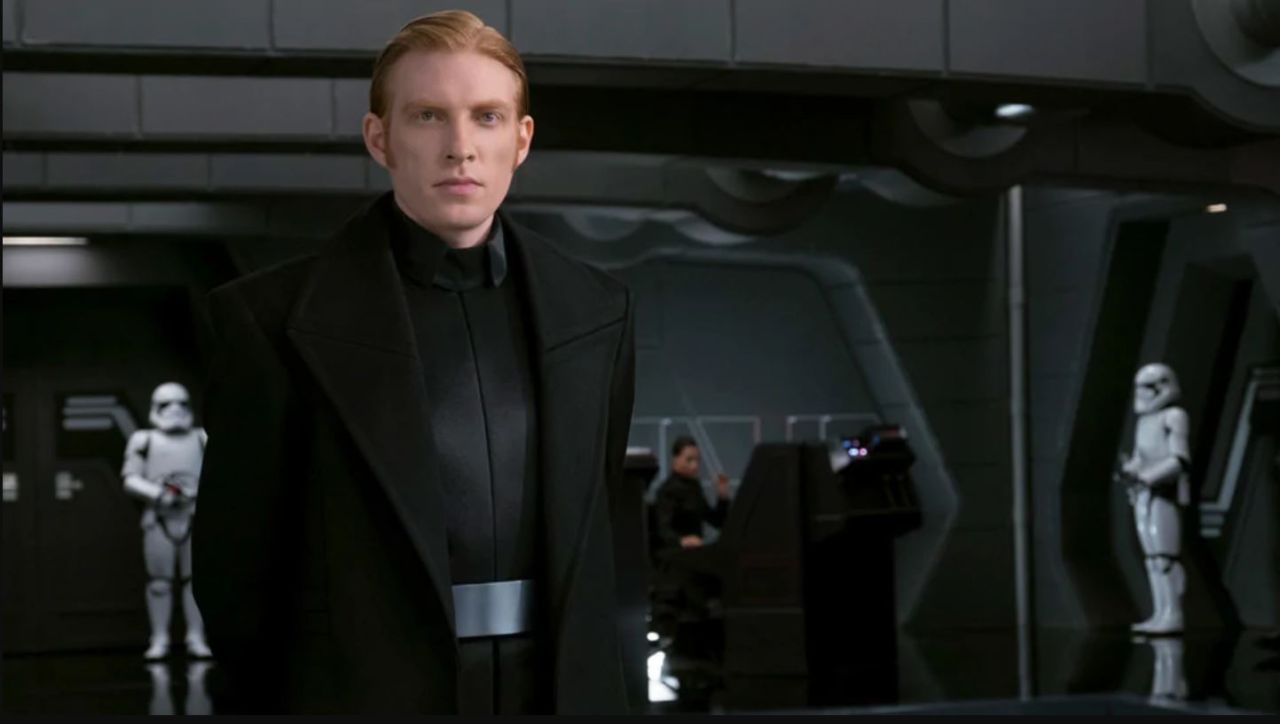 Yep, Hux is the anonymous spy who has been secretly working with the resistance. Not because he’s had a change of heart, but because he hates Kylo Renn and wants to see him lose. Unfortunately for Hux, he is immediately executed for letting the prisoners escape.

Meanwhile, Rey is having another lightsaber duel with Kylo Renn. They do the whole “come to the Dark Side!”, “No! Come to the Light Side!” thing, with Rey appearing to lose more ground. Kylo reveals his plan to kill Palpatine and rule the galaxy alongside Rey. For a second, it looks like Rey might take his hand, but instead she hightails it and escapes with her friends.

Poe and Finn then have a fight about… Finn’s feelings for Rey, or something? It’s not really clear why they’re being aggro to each other, to be honest. Like we said, the “love triangle” is underdeveloped.

While all this is going on, Rey decides to head to the Death Star alone. She finds the Sith Wayfinder but is immediately confronted by Scary/Sexy Dark Rey (i.e. – the one with the red lighsaber from the trailers.) It’s a vision of her greatest fear, a bit like when Luke confronted Darth Vader on Dagobah and saw his own face in the mask. 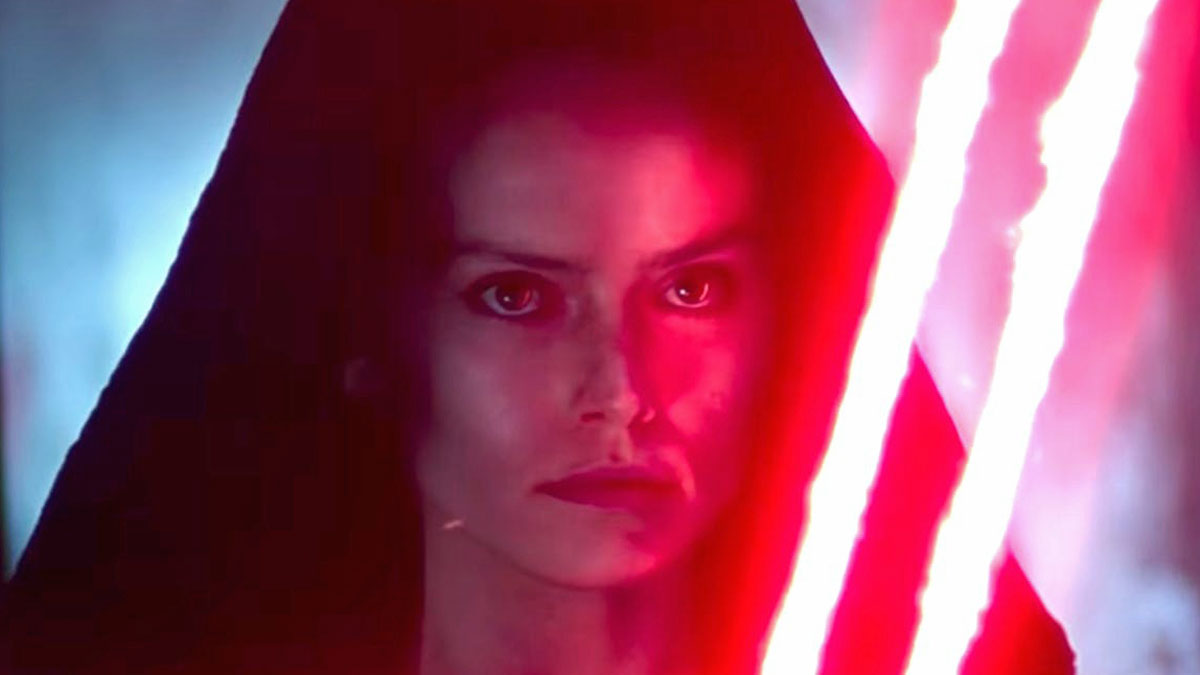 Before Rey has time to process all this, Kylo Renn shows up to reveal her true parentage – and it’s a proper bombshell. She’s not a Skywalker. She’s not a Kenobi. And she’s not a Solo. She’s a PALPATINE.

That’s right – the granddaddy of Star Wars villains is her literal grandfather. No wonder she’s so attuned to the Dark Side.

Before she can stop him, Kylo destroys the Wayfinder. They then go toe-to-toe with their lightsabers, but Rey’s heart isn’t in it. She basically gives up and invites death. Just as he’s about to kill her, General Leia reaches out telepathically to her son Kylo and manages to awaken the good inside him. Oddly, Rey uses this tender moment to skewer him through the chest with her lightsaber. Owned.

Meanwhile, Leia dies (for good this time.) Reaching out telepathically across the galaxy used too much Force, just like it did with her brother Luke. Sniff. 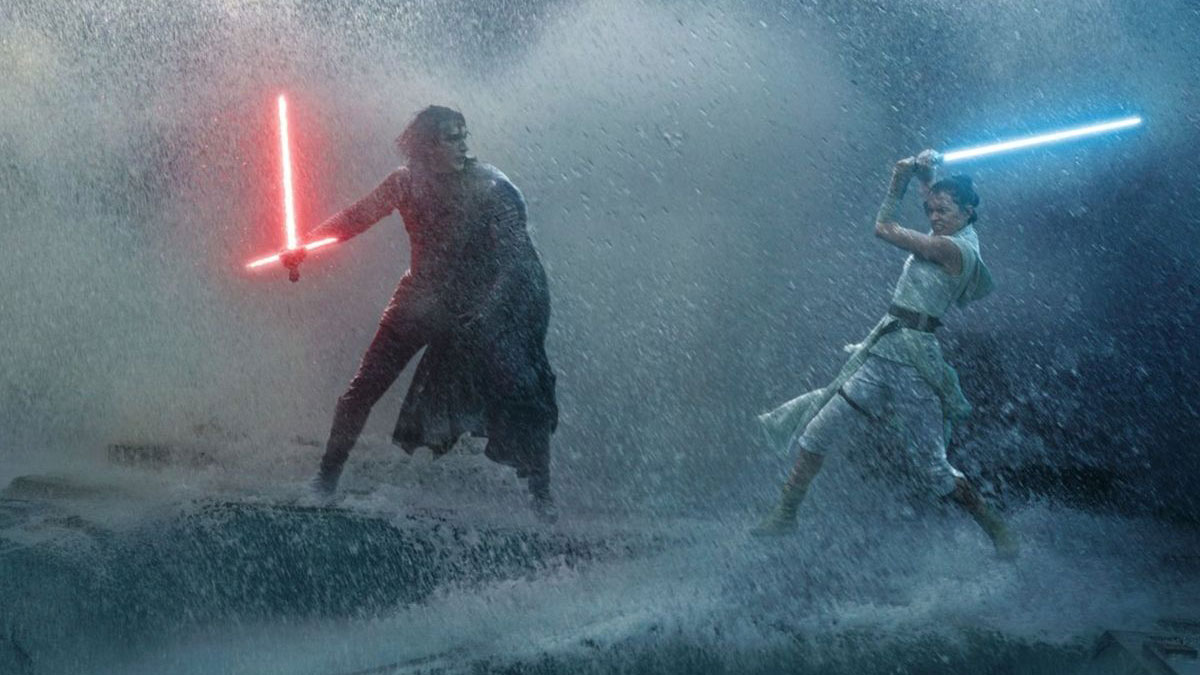 Rey uses her giant-snake-healing trick to patch up Kylo’s injuries. She then hijacks his ship and flees to Luke’s refuge planet where she intends to hide forever because of her attraction to the Dark Side.

Meanwhile, Kylo is visited by the ghost of his father, Han Solo, who convinces him to return to the Light and start calling himself Ben again. (No it’s not a Force ghost, it’s just Kylo/Ben imagining stuff.) Redeemed, he tosses his red lighsaber into the ocean and joins the goodies! (By which we mean the Resistance, not the 1970s comedy troupe…Although that would have been awesome.)

On her hideaway planet, Rey is confronted by the Force ghost of Luke Skywalker who is all “WTF?” She explains the Palpatine connection but he convinced her to confront him anyway. The only problem is she doesn’t have a Sith Wayfinder. Fortunately there’s still one inside Kylo Renn’s ship which she stole earlier. Phew, that was close.

This sets things up for the final confrontation. The rebels launch a hopeless attack against the Sith Home World’s fleet as Rey confronts Palpatine. She aims to kill him – but that’s exactly what he wants. In classic pantomime Palpatine style, he explains that by giving into her rage and killing him, she will be bringing their life forces together.

Kylo/Ben then shows up to help Rey defeat the Emperor. But first he has to get through the Knights of Renn. (Remember those guys?) Needless to say, he makes short work of them. The Knights of Renn are rubbish. 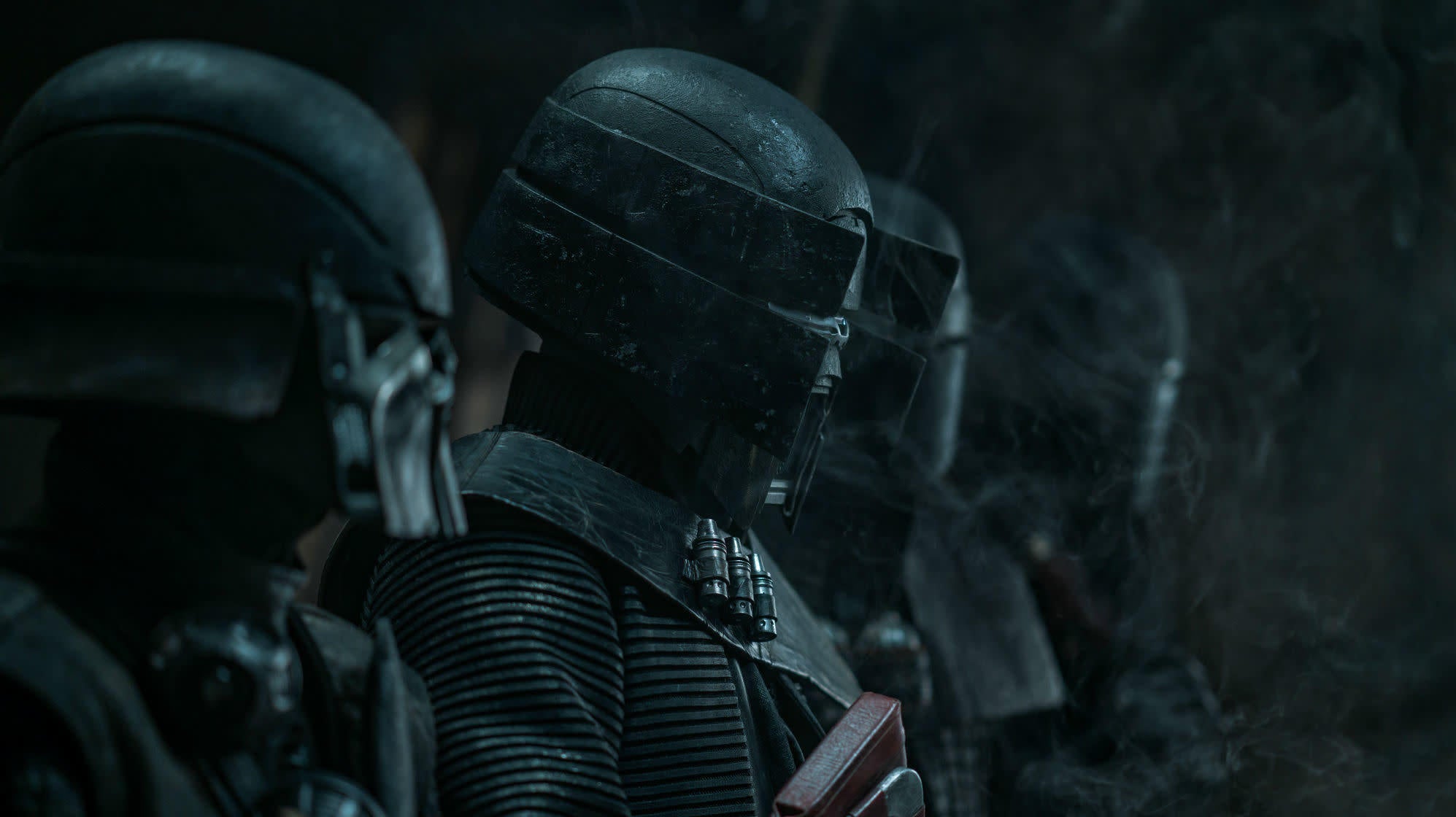 The Knights of Ren were useless posers. (Photo: Lucasfilm)

Rey and Kylo/Ben then battle Palpatine together and get thoroughly thrashed. Palpatine chucks Kylo/Ben off a cliff and knocks Rey out with electric bolts from his fingers.

Meanwhile, the Resistance is getting its arse handed to it in the skies above. BUT! A bunch of friendly randoms show up along with Lando and the tide starts to turn in the good guys’ favour. At the same time, Rae throws everything she has at Palpatine and manages to vaporise him with his own lightning bolts. She then slumps to the floor, dead.

Kylo/Ben, who isn’t quite dead yet, cradles the lifeless body of Rey and uses his own life force to ressurrect her. They share a quick pash and then he croaks. (So basically, Rey chose the patricidal bad boy over loyal, dependable Finn. Nice guys always finish last.)

After some jubilant celebrations (and a very brief cameo by some Ewoks), we jump forward in time. Rey and BB-8 return to the birthplace of Luke to bury his lightsaber. A friendly random asks who she is. After a brief pause she turns to look at the smiling ghosts of Luke and Leia and replies: “Rey… Skywalker”.

And with that, a space opera 42 years in the making comes to an end. Tell us what you thought about the movie in the comments!

Star Wars: The Rise Of Skywalker is in cinemas nationally now.