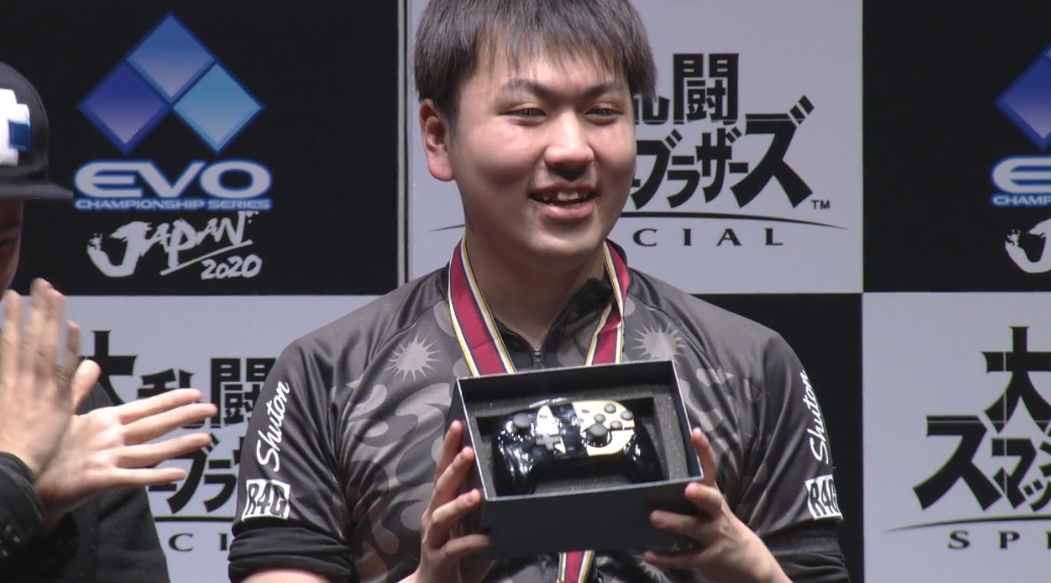 Shuto “Shuton” Moriya won his first ever Smash Bros. Evo Championship this past weekend. His prize? A special gold embossed Switch Pro controller presented by none other than series creator Masahiro Sakurai. It didn’t break, as some tournament-winning items tend to, but it did take a quick tumble.

Who could blame the 23-year-old pro Smash player for being caught up in his big moment after battling his way to 12 wins in an undefeated run through the winner’s bracket of the Evo Japan tournament. Based on the shocked look on their faces, neither he nor the rest of the top eight finishers had any clue Sakurai would be showing up. They were all clearly star-struck.

Moriya’s clinical control of Olimar during his Smash battles established him as one of the top 20 players in the world, according to last fall’s Panda Global rankings. It would have been nice for Nintendo to have given the winner more, but no one competing in the Smash Bros. Ultimate tournament was actually awarded any cash.

Nintendo has long been resistant to monetising the competitive scenes around its games, with president Shuntaro Furukawa recently explaining that this is in part out of a desire not to fragment the game’s audience and fans.

As a result, while the winners of Evo Japan’s Street Fighter V, Tekken 7, and Soulcalibur VI tournaments each walked away with several thousands of dollars in prize money, Moriya got a controller. Meanwhile runner-up Seisuke “Kome” Komeda, who made a valiant run up through the loser’s bracket only to lose in the grand finals 3-0, received a second-place medal and a Nintendo swag bag.

If you happened to miss the tournament altogether, you can catch up on all of the matches over on Evo’s Twitch channel.