dunefeaturereview
Image: Dune
To sign up for our daily newsletter covering the latest news, features and reviews, head HERE. For a running feed of all our stories, follow us on Twitter HERE. Or you can bookmark the Kotaku Australia homepage to visit whenever you need a news fix.

Dune is an experience so broken I don’t even know where to begin. Except to say it’s the best board game I’ve played in a long time.

While coming out in time for a new movie later this year, this isn’t a new game. It’s actually a reprint of a classic, dating all the way back to 1979 (so even before David Lynch’s movie), and like many classic board games, it has some rough edges.

That’s not a criticism, though, because the game plays to that. It knows it’s odd, knows it in its bones that its factions are weird and its rules inconsistent and just runs with it, eschewing the idea that the six playable sides have to have anything in common, let alone most things.

We’ve got Houses Harkonnen and Atreides, the native Fremen, the Emperor’s personal forces, the Spice Guild and the Bene Gesserit duking it out for victory, and as anyone who has read the books/seen the movie knows, some of those are barely factions at all. Which Dune is aware of, because aside from the fact everyone has armies they can deploy onto the surface of Arrakis, and everyone gets money for harvesting spice, the approaches to play and to winning are so varied that each side may as well be playing a different game.

The basic aim of Dune is to use your troops to run/fly around Arrakis harvesting spice, battling anyone who gets in your way while sandstorms and giant worms threaten to swallow entire armies at any given moment. Victory can be achieved by seizing and holding a certain number of citadels, which like a lot in this game will sound familiar to Game of Thrones players (Dune’s been a big inspiration to designers over the years), but those are just the barest bones, the table being set before the feast.

Victory can be achieved by capturing citadels, but that’s not the only way you can win. Each side has their own unique victory condition, and some of them are bonkers. The Fremen can win by having nobody control certain citadels, for example, while the Bene Gesserit have an insane trick where the player is allowed early in the game to predict which other player is going to win, and in what turn (games are capped at 10 turns). If the Bene Gesserit player gets that right, then they win, beating the person who actually won.

Which is crazy enough, but now consider that Dune encourages the creation of formal alliances. Allies can not only help each other out by lending some of their unique faction powers, but you can share in victory conditions, so if one of the alliance member’s two unique criteria are met, then both win. Essentially, most people are always playing as only half a side, and it’s only when you form an alliance that you unlock a real sense of power.

Every game, then, is an experiment in weirdness and death, as factions are cobbled together and everybody gets to enjoy (or sometimes suffer) the result of a union between, say, the Fremen and Harkonnen, or the Bene Gesserit and Spice Guild. And the next time you play, every alliance is different again, like you’re all some black-clad Dr. Moreau of Arrakis, constantly giving birth to hideous and powerful new superfactions. 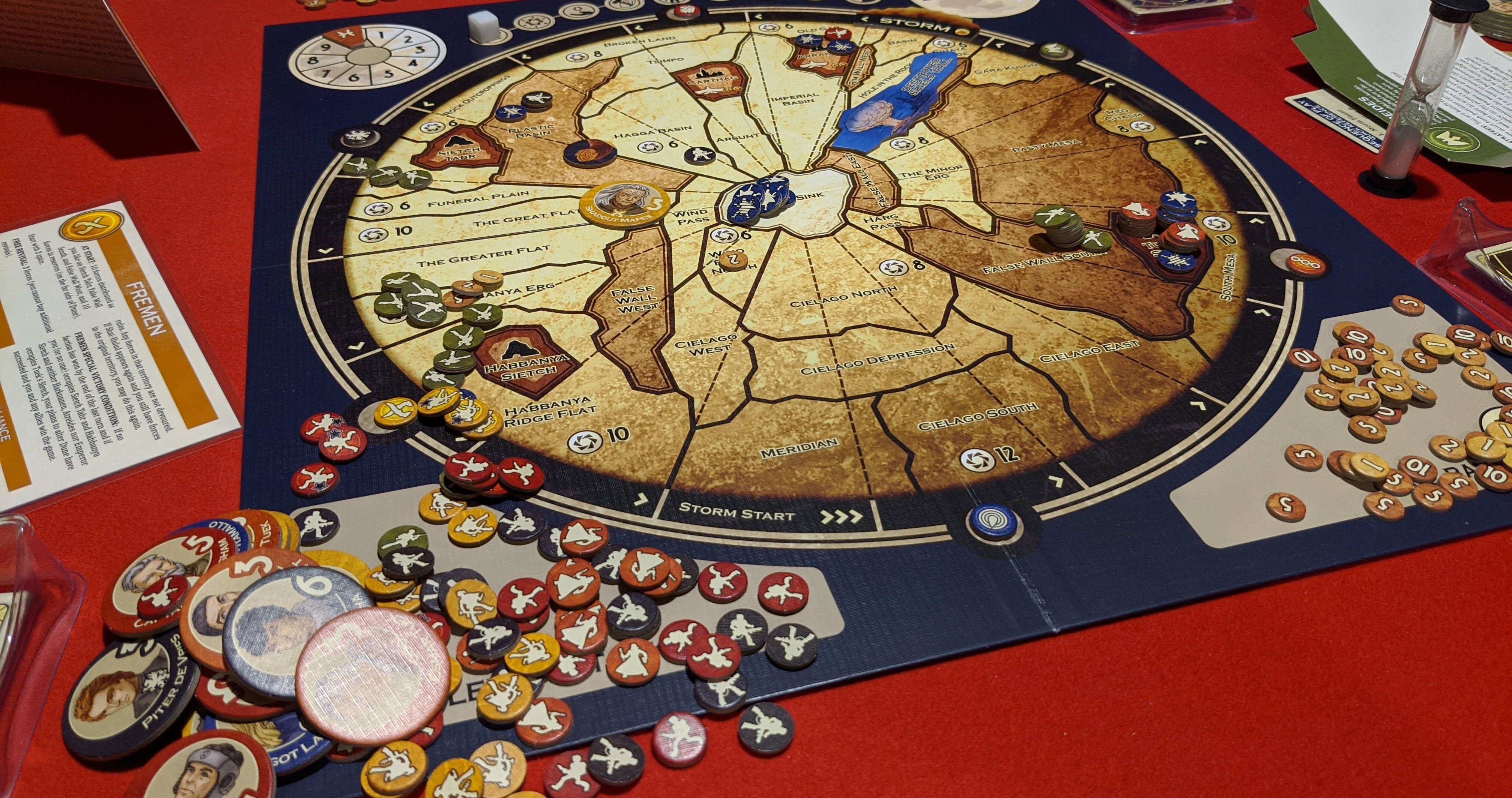 Like I said up top, so much of what makes Dune so much fun is the many and fundamental ways in which it’s broken, or at least broken by the standards we’re used to by modern game design standards. Board games these days, especially big lincesed ones like this, are—just like video games—usually playtested and refined to within an inch of their lives. Balance is everything. If a major publisher was pitched Dune in 2020 they’d likely tear it to pieces, aghast at how so many of this game’s features are seemingly worthless, overpowered or both at the same time.

They’d also look at the game’s inherent randomness and freak out. Dune is a game where strategy is key, but that’s often not enough. The game’s most important events, like the distribution of spice or the location of army-destroying storms, take place almost entirely at random. It’s immensely cruel to see your best-laid plans destroyed by a random card draw, even more so to watch a whole game pass you by because spice never bothered spawning anywhere near your troops.

But here, on this planet, it works. Dune is nuts, may I remind you, and Arrakis is a hellscape. Spice is hazardous, storms are fatal and sandworms are everywhere, so fuck it, why not make the game based on Dune as menacing and unpredictable as its namesake. The cruelty in Dune works because it’s thematic, and I’m thankful that in re-releasing this old game the publishers realised that too, and chose simply to update the game’s visuals, and not its lopsided ruleset.

Combat is the purest example of this. Your armies are precious—they’re expensive to land on the planet, and expensive to reinforce when lost—and every troops counts. But when you fight, victory isn’t just determined by army size. Both sides involved must choose a leader, and both leaders can go into battle equipped with gear like shields and personal weapons. Sometimes, if one leader equips a knife, and the other leader doesn’t have a shield, that’s it! That leader is dead, his army lost, and the armies didn’t even have to fight! It’s complete bullshit when it happens to you, but as is so often the way, absolutely hilarious when it happens to your rivals.

And again, that’s fine! You inner General might be pissed at the way a battle can be lost before it’s even fought, but that’s exactly how House Atreides was undone in Dune, and so once again what anywhere else might be regarded as suicidally unfair game design is here just part of the Dune experience.

I can’t remember the last time I laughed, gasped and cursed like I did playing Dune. The way alliances can be made but then broken, the elastic nature of the basic victory conditions and the treachery lurking behind every decision made it feel like every player was always one step away from victory but at the same time one battle away from utter ruin at the same time.

I played a game that clocked in at over five hours and loved every second of it. From the meanest lows to the hilariously masochistic highs. If rough old games can create this many thrills and spills with their unpredictability and unfairness, maybe we should be playing more of them.