Predator: Hunting Grounds Is Only Fun When The Predator Is Around 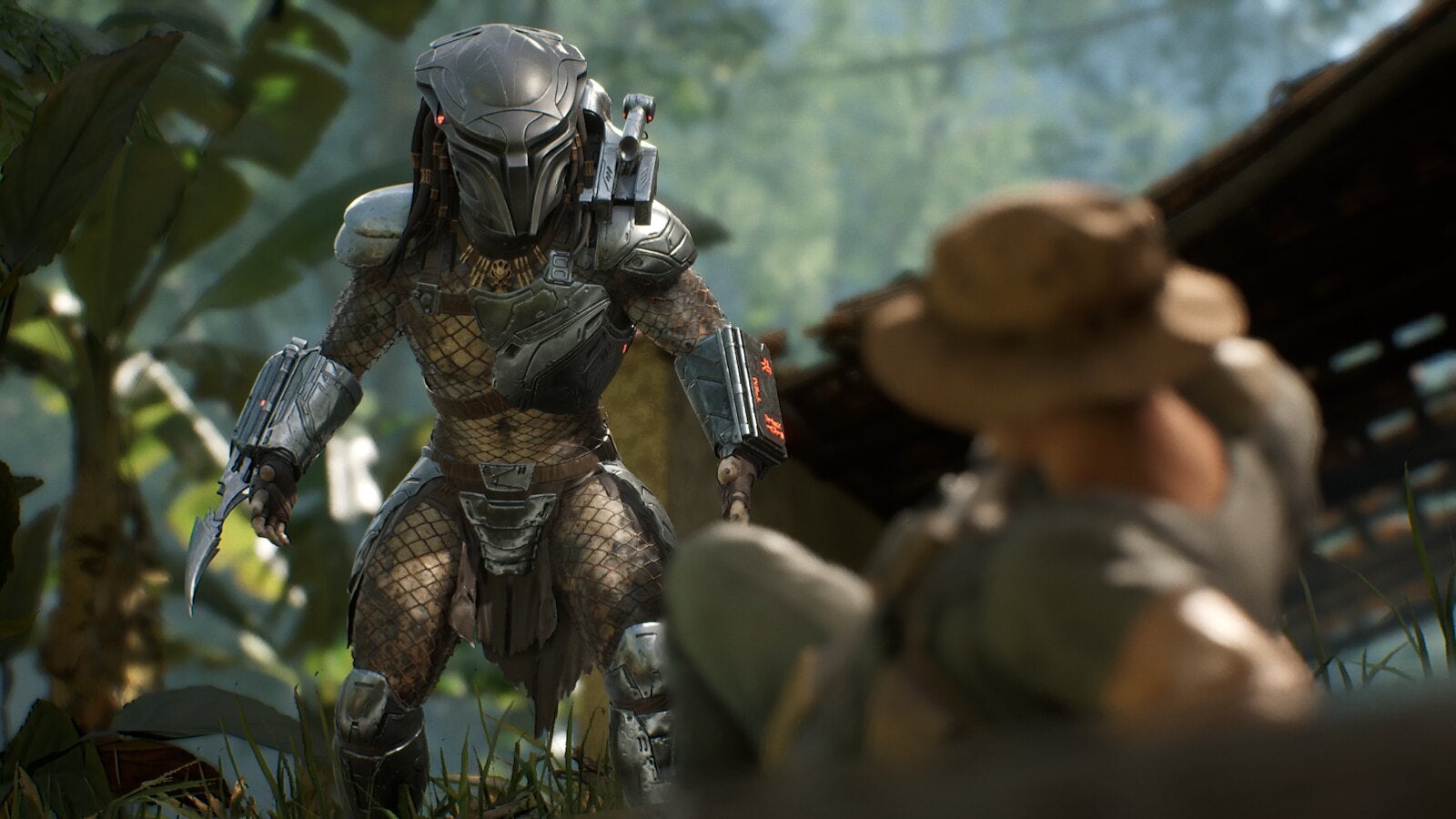 “Which button rips your spine out...” (Screenshot: Illfonic/Sony)
To sign up for our daily newsletter covering the latest news, features and reviews, head HERE. For a running feed of all our stories, follow us on Twitter HERE. Or you can bookmark the Kotaku Australia homepage to visit whenever you need a news fix.

Predator: Hunting Grounds takes the original film’s concept—a small squad of soldiers on a mission in the jungle are ambushed by a deadly alien hunter—and turns it into an asymmetrical multiplayer game. It seems like a logical and fun adaptation, but some mediocre gunplay and long waits bog the whole experience down.

Hunting Grounds, out on PS4 and PC now, was developed by Illfonic, the studio behind the Friday The 13th: The Game. Where Friday The 13th is a game about hiding, Predator is more action-focused. The soldiers aren’t harmless camp counselors; they’re deadly warriors equipped with guns, grenades, and armour. Up to four players are dropped into a jungle and given a basic series of objectives: Kill some drug lords and blow up their base of operations, take out an enemy base and their supplies, etc. They have to do all this without getting killed by the player controlling the Predator. They can shoot trees to make it harder for the Predator to hide, or cover themselves in mud so the Predator can’t see them with its thermal vision.

The Predator has a lot of fun gadgets and abilities at their disposal. You can climb trees and branches easily using something the game calls “Predkour.” (This game also calls the Predator’s dreadlocks Predlocks. It’s terrible. I hate it.) You have deadly blades you can slash and stab people with, heat vision to see your targets and their recent footsteps, and the ability to become invisible. Look, if you haven’t seen The Predator go watch that—what it does there you can do in this game. The big takeaway is that the Predator is extremely deadly if you play your cards right. 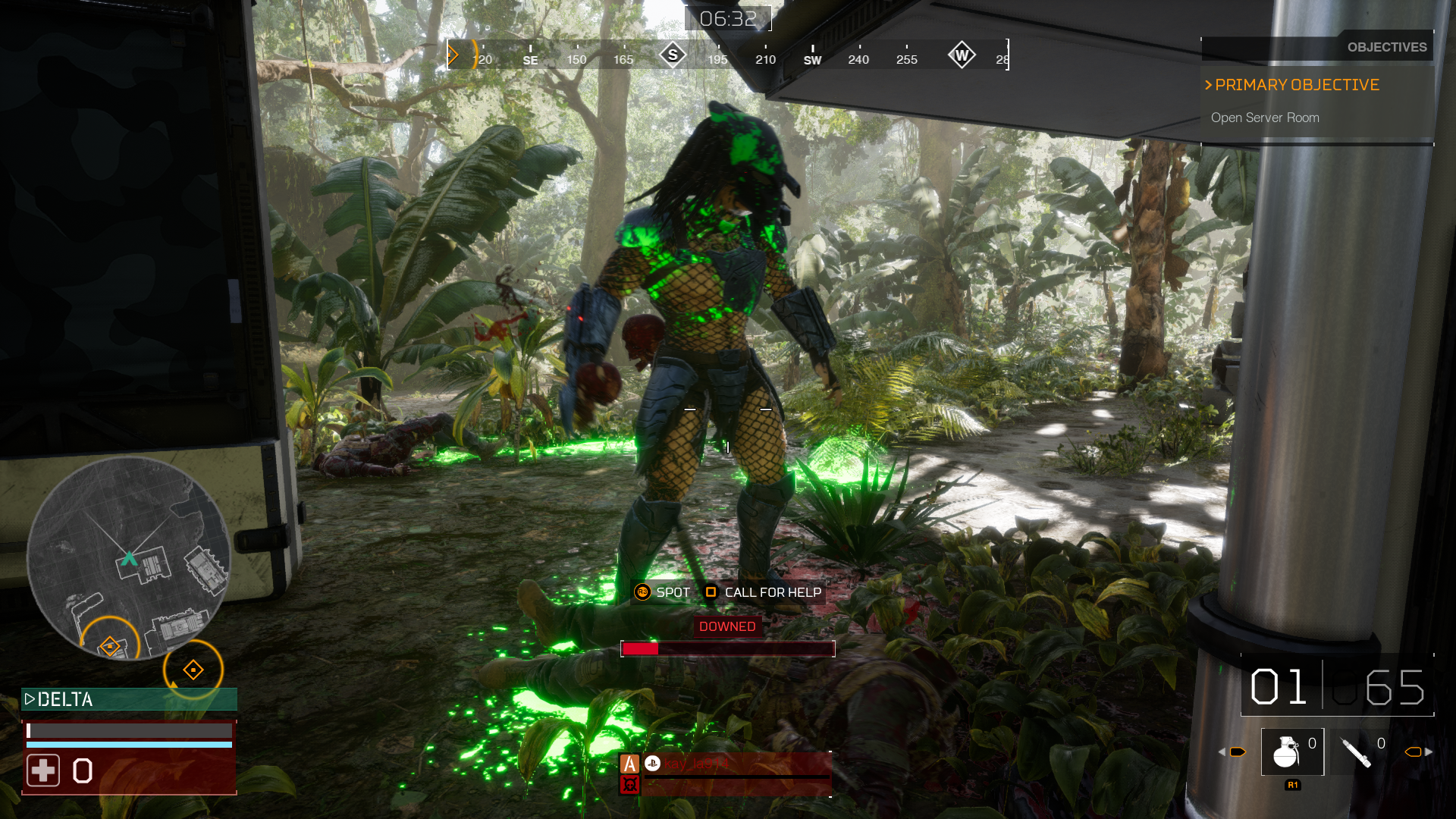 The Predator bleeds neon green blood, like in the films. This can help players track it. (Screenshot: Illfonic/Sony, Kotaku)

I played about a dozen matches, mostly as the soldiers and a few as the Predator. The most fun matches I played were ones where the Predator was active and aggressive. However, far too often Predators I encountered either went AFK, attacked us on the ground too much and died, or found us only a few times during the mission. When the Predator isn’t around, Hunting Grounds is just an average co-op shooter where you fight waves of boring enemies and press buttons. You shoot nameless thugs and goons using standard Call of Duty controls. It’s fine, but it’s not enough to keep the game exciting if you don’t get a skillful Predator player.

If you get a good Predator, Hunting Grounds is a tense experience. There are a lot of different ways a match can play out. The Predator can kill all the soldiers, but the soldiers can also kill the Predator. The soldiers can also finish their original mission and leave via a helicopter, without killing the Predator. Even if you down the Predator as the soldiers, you still need to act fast to kill it or the player in control of the Predator can activate the iconic wrist-mounted mini-nuke, killing any players in the blast radius. It was sometimes hard to tell who won a match of Hunting Grounds—there are no on-screen indicators of who won—but when everyone was playing and active, it was often a lot of fun. A lot of the levels look dull and aren’t fun to fight in or explore. (Screenshot: Illfonic/Sony, Kotaku)

Sadly, if you want to play as the Predator, you might need to wait a while. You can look for a match where you play as a soldier, a Predator, or either. I found that these options had different wait times; I often had to wait between four and nine minutes when I wanted to play as a Predator. If you end up in a match with only one soldier who is AFK, which happened to me, it can feel like a giant waste of time.

Predator: Hunting Grounds can be a great, if a little rough, experience if everyone is playing. But one problem, be it an AFK Predator or only a small group of active soldiers in a match, can drag the experience down. If you have a dedicated group of four or five friends, Hunting Grounds might be a more consistent experience. But for solo players, you might spend more time waiting to be the Predator than facing off against it in the jungle.