Twenty years on from release I must acknowledge that, for a classic multiplayer game, Perfect Dark now suffers from a fairly major fault. It’s nigh-on unplayable. Those sleek offices and twisting tunnels have morphed into poorly textured geometric mazes. The explosions and effects, brilliant in memory, are muted. Most of all, the always-suspect framerate is now a convicted murderer.

None of these reasons justify a return. But what Perfect Dark does have, beyond even GoldenEye and most other FPS-es, is imagination. This is an ideas game, as concerned with its own genre’s existence and limits as it is with targets. If Rare had revolutionised what a console FPS could be, Perfect Dark was its belated manifesto.

Sequels, even spiritual sequels, have governing rules, neatly encapsulated by Cliff Bleszinski’s “bigger, better, more badass” tubthumping for Gears of War 2. Perfect Dark can do excess, but let’s shoot the elephant in the room first: GoldenEye. There remains a misconception that Rare couldn’t continue with the Bond licence, but the developer in fact rejected the opportunity to make the tie-in to Tomorrow Never Dies, perhaps feeling that a return to 007’s world would offer little more than a retread of the Kalashnikovs, missile sites and gadgets it had already perfected. The ideas had married perfectly, but a second Hollywood tie-in would see diminishing creative returns.

The lack of a licence brought freedom and yet, in this context, choosing to make an FPS with a secret agent may not seem the most original move. Rare couldn’t abandon the espionage angle that dovetailed with its design talents: double-helix levels with spiraling objectives, enemy positions perfect for the stealthy, patient player, and the glorious gadgets. Perfect Dark’s grimy hi-tech vision of the future showed the cinematic influence here is Blade Runner, shiny office buildings rising out of dirty streets. There are complexes to infiltrate, computers to hack, hoverbikes to ride, then the lady herself: Bond in a catsuit, apparently voiced by Mary Poppins.

“Cute, very cute,” she quips when looking at a crate bomb. “I was ready half an hour ago, it’s you that’s making us late,” goes another as she enters in an evening gown. These banal lines are typical of a heroine who combines Pierce Brosnan and Julie Andrews yet still lacks charm. This extends to the supporting cast, most of whom can be found in the Carrington Institute, a brilliantly realised hub for the game that later doubles up as one of the finest singleplayer levels. Wandering around its rooms means meeting a succession of extremely camp British types who coo things such as “Welcome to hacker central.” The writing isn’t inspirational, with Joanna Dark not so much a character in search of an author as a cipher in search of a magazine cover.

The game’s biggest misfire is the attempt to inject personality via a comedy sidekick: Elvis, an alien with a fondness for sticking his bulbous cranium into your firing line. Everyone who has played this game hates Elvis, mainly for that reason (if he dies you fail missions and HE DIES SO MUCH BECAUSE HE’S AN IDIOT). Perfect Dark is otherwise po-faced, a microcosm of the duality at this game’s heart. There’s order, in the form of the game’s story and mission structure, and the chaos of its interactions and weapon sets. 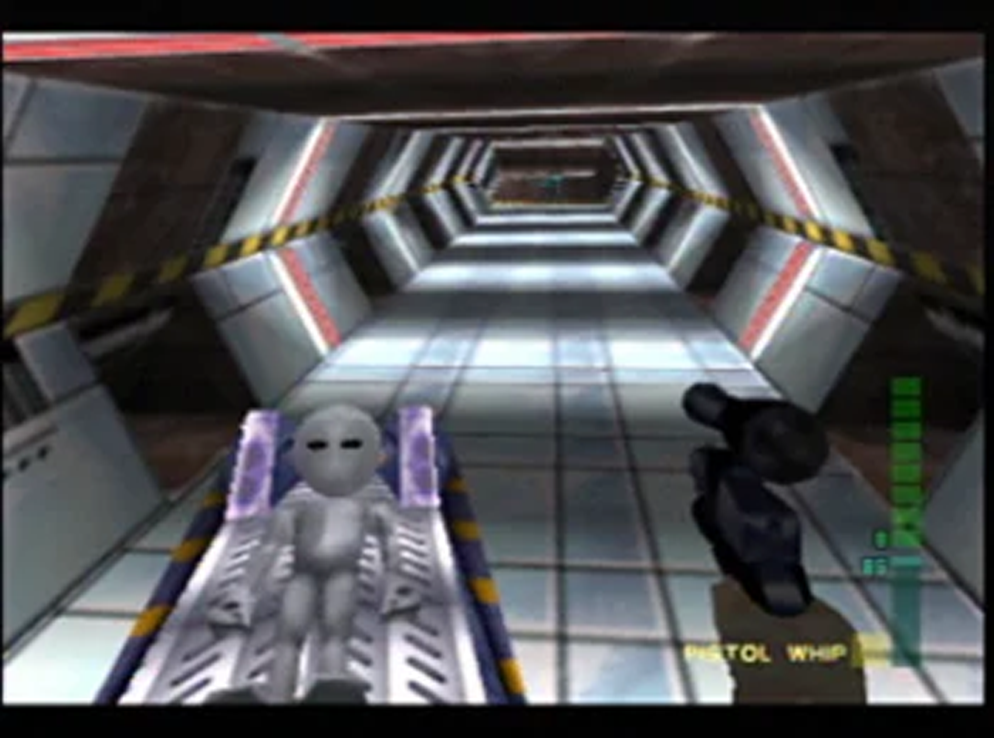 So ignore the Carrington Institute and dataDyne, the groany story, and the whole thing’s ponderously portentous name and typeface. Perfect Dark, as a game, is hilarious. It’s about drugging big-headed aliens until they can’t see, then strapping mines to their eyes. Setting elaborate traps with laptop guns and proximity mines, getting into slap fights and using n-bombs to make opponents run into walls.

This all comes from one of the best-ever FPS weapon sets and, oddly enough, its lack of balance. Restraint here would have made Perfect Dark a tighter, more focused experience, helped with its severe framerate issues, and removed almost all of the fun. Instead it overreaches itself with game-breaking tools just to show that it can. It gives you a gun that can shoot through walls, then adds an X-ray sight and auto-targeting as standard (Farsight). The Psychosis Gun converts enemies to your cause. Assault rifles can shoot but also turn into proximity mines (Dragon) or be switched sideways and become grenade launchers (Superdragon). The laptop gun is all about an SMG of sleek chrome and efficiency, perfectly exemplified when you toss it away and it begins acting as a sentry gun. The RCP-90 is the most powerful automatic weapon in the game, but that’s not enough so let’s add a cloaking device. 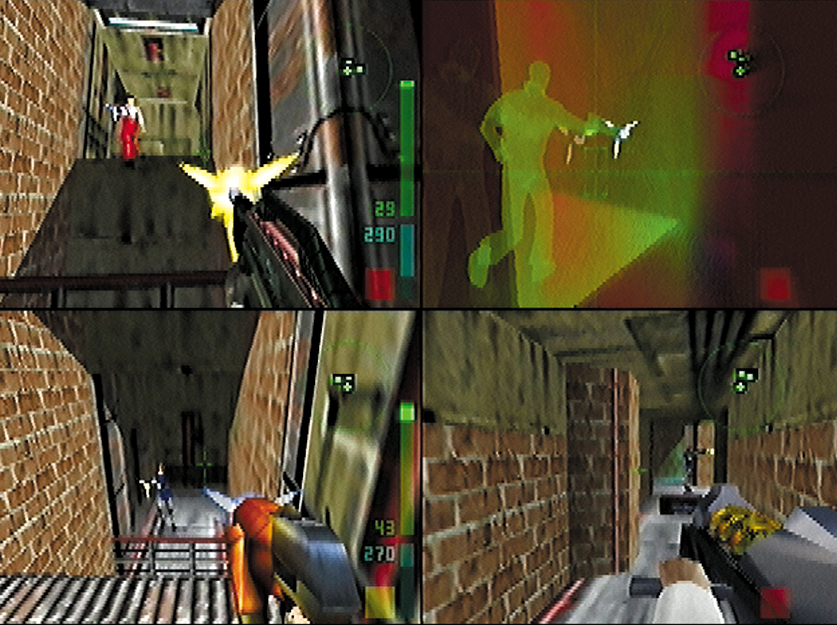 Proximity mines, as with GoldenEye, are the framerate killers. Any multiplayer game featuring them degenerates into a race to see who can plant most, quickest – though this time around they at least have a threat detector built in to help out.

Some weapons are there just for the hell of it, like the nerve grenade that turns four-player splitscreen into a black-and-blue smeary mess, or the perfect recreations of GoldenEye guns (with names like PP9i and Klo1313). The Drugspy is the best espionage gadget, letting you float around before shooting tranquillizers with a ‘pfft’ into the soft flesh of a guard’s neck. Brilliantly, they get curious about the hovering object before blowing it away, letting you set up very easy knockouts.

It’s not just about function, either. This is an FPS for gun fetishists: in place of GoldenEye’s ‘dipping’ reload animations, Perfect Dark is the visual equivalent of tonguing the barrel. The Cyclone, a svelte curve of metal, whirrs, and clunks with each new magazine – the chocolate-orange slabs of ammo feed through its belt, are ruthlessly stripped of their bullets, and fall to the ground empty. There are tremors as a thick clip is slammed into the base of an RCP-90. Alien weapons suck in opalescent blobs with a ’60s Dr. Who sound effect, bolts clack into place on anything automatic, and the humble throwing knife has to be casually tossed in the air and caught with a flourish before use.

Even the bots are in on it. Perfect Dark calls them ‘sims’ and gives them ‘personalities’. The Preysim looks for recently spawned and weak players. Vengesim blindly hunts the last person to kill it. Judgesim maintains balance by killing the current leader. These have obvious applications, but there are others designed to simply shake things up a bit. The Peacesim abhors violence, and runs around the level trying to collect weapons and ammo before players can get to them. It won’t attack, but get too close and it’ll disarm you. The Fistsim just runs around whacking players – which with the overzealous dizzying effect is very annoying. And the Rocketsim just likes explosions, regardless of its own life. 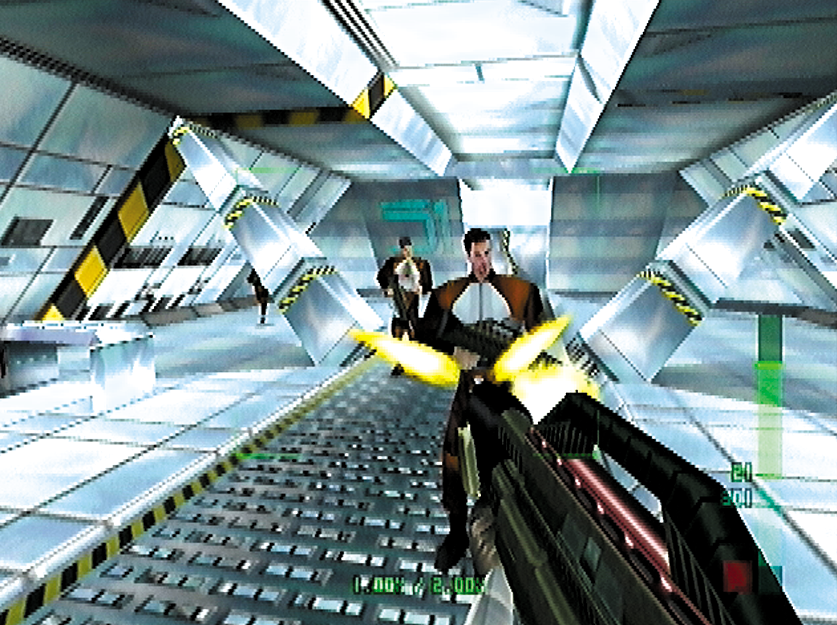 Like the weapons, these sims were designed for possibilities rather than balance, for play rather than work. For combinations. It’s a miracle that this gallimaufry works at all, never mind that it was one of the greatest four-player FPS games of its time. Almost as an afterthought, the Combat Simulator includes challenges that can be tackled solo or with friends. Usually some kind of objective-based assignment against a sim or team of sims, over 30 missions this mode somehow creeps from embarrassingly easy to not-in-this-lifetime-pal difficulty.

Multiplayer also includes some insanely time-demanding achievements, which for the top (level one) rank require you to, among other things, kill 18,000 (splitscreen) opponents, win 900 accuracy medals (maximum of one per game), travel 9,000 kilometers in-game (that’s around 5,600 miles), and play for a total time of 12 days and 12 hours. Like so much of Perfect Dark, it’s partly a joke and partly hubris. But it’s also pretty damn prescient about where competitive shooters were going, and had the temerity to get it the right first time. Someone important at Infinity Ward had played the hell out of this long before the first Modern Warfare’s design document.

Most of the ideas and innovations of Perfect Dark are in multiplayer, but there are also gems in the underrated singleplayer campaign. Developing on one of Goldeneye’s excellent principles, difficulty levels present different types of challenge rather than the standard upping of enemy AI, numbers, and hitpoints. Play on the easiest, Agent, and you’ll face a relatively sedate experience with one or two objectives. But as the difficulty increases locations become circuitous with more objectives and new set-pieces to trigger: the first level, set in the dataDyne skyscraper, introduces an attack helicopter on Secret Agent, hovering outside and carpeting the lobbies with minigun bullets.

A familiar assortment of nonsense and brilliance can be found in the various cheats and Easter eggs. In Chicago, you need to tempt a guard out of a bathroom to find a block of cheese stuck down a toilet bowl. There’s a block of cheese in every other level of the game, too, for no particular reason. Cassandra De Vries, one of the game’s comedy villains, wears a necklace that reads ‘18M0ZYM8ND185’, a curious bastardization of ‘I Am Ozymandias’, and acts like it. The cheats, unlocked with timed level runs, run the usual gamut: a Big Head (DK) mode, Small Jo mode, Heads Only mode, and Marquis of Queensbury rules. But there are some crackers, such as Perfect Darkness. This blacks out the level, but gives you night-vision goggles – perfect for some user-controlled rockets…

Even the way people played together is thrown up in the air. In 2000 a shooter that offered a co-operative campaign mode was unusual, if not exceptional. But what about a counter-operative mode, where one player tries to complete the level while another takes control of the enemies in their path?

As with so many other of Perfect Dark’s big ideas, it falls just short of greatness, but is good enough that your imagination can fill-in the gaps. And as with any brave innovation, there are happy flaws in the counter-operative mode that the baddies can exploit to infuriate the goody-two-shoes. Shooting guns from your fellow soldiers’ hands will make them whip out their firearm and immediately begin seeking Joanna. Get four or five to attack with you on any difficulty and it’s all over bar the gloating.

There’s real character in Perfect Dark, but it’s nothing to do with its heroine. Walking through levels, you’ll see little scripted sequences with people being shot, arguing, or simply relaxing. Playing with friends, you’ll devise deathtraps of outstanding ingenuity, before being sniped through the wall from 300 meters away. Ian Fleming himself could have been behind the gentlemanly twinkle in the repurposing of the Facility level as Felicity. And when we really get down to brass tacks, how many games have Shigeru Miyamoto running around and hiding the weapons?

Perfect Dark may not be all that much fun to play in 2020, but its currency of ideas and provocation, many of which still haven’t been picked up by the genre, remain sound. Who knows what, if anything, is in store for Joanna Dark. More re-releases, perhaps another tie-in novel. Endless retrospectives like this. But Perfect Dark never needed to worry about the future anyway. It’s already written most of it.

This article was originally published in Edge magazine: you can subscribe here.