“Hold X to review Call of Duty: Advanced Warfare.” If only it were that simple. 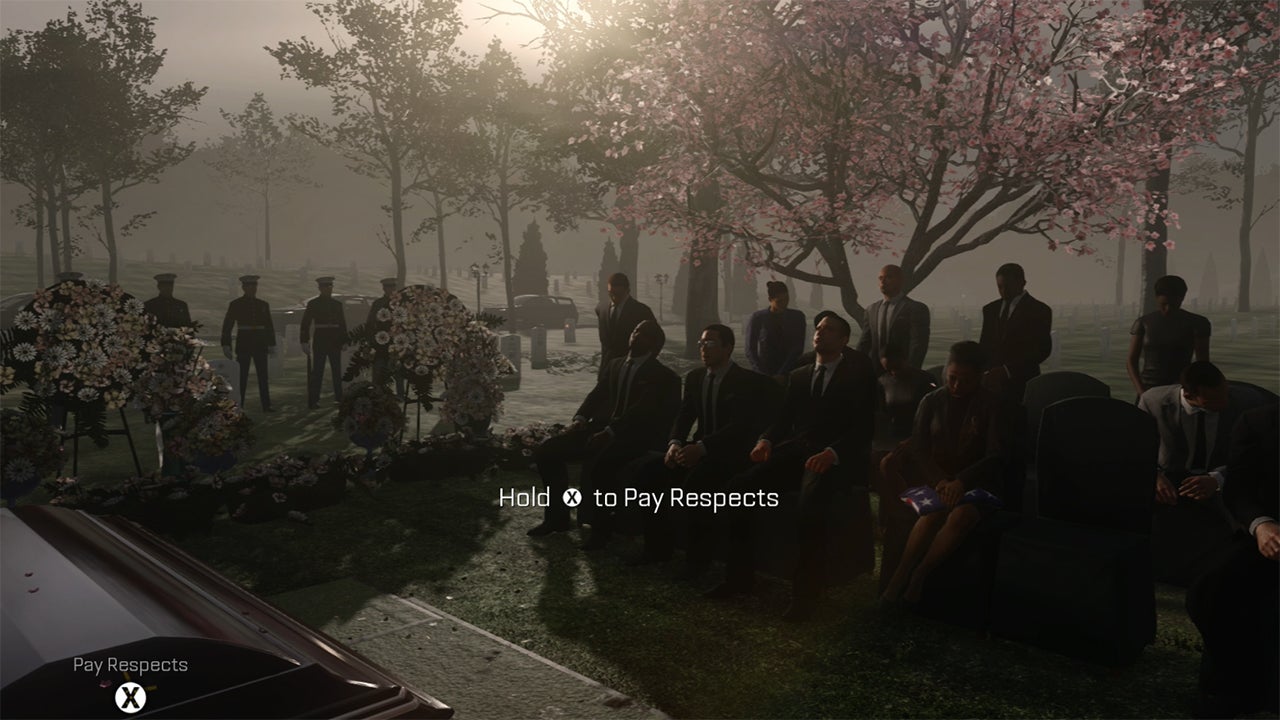 It’s easy because that’s exactly what Advanced Warfare‘s campaign mode is. Change the setting from the 2050s to modern day and strip away the high tech gear and this would be just another Call of Duty game.

Taking lead on Call of Duty development for the first time, Sledgehammer Games doesn’t tinker with the established formula. Advanced Warfare isn’t a complete overhaul of the franchise. It’s a tech upgrade — an impressive tech upgrade.

Take the campaign’s story, for instance. A soldier finds himself embroiled in a plot to take over the free world and battle against overwhelming odds to set things right. It’s standard Call of Duty fare. It’s just presented with more technical proficiency than any Call of Duty before it.

The digital actors come to life as they never have before. Kevin Spacey does a fine job in his video game debut, portraying Jonathan Irons, the founder and CEO of the world’s largest private military corporation, Atlas. Prominent video game actor Troy Baker is just lovely as Jack Mitchell, a wounded Marine given a fresh chance to fight by Irons. And British actor Gideon Emery is outstanding as Mitchell’s captain.

As the story goes, Mitchell is an up-and-coming Marine whose career is cut short following a tragic mission to South Korea. He loses his best friend, his left hand and his dignity as the weighty moment is accompanied by the unlocking of the “Seoul Mates” achievement. In steps Jonathan Irons, offering to lend Mitchell a replacement hand in exchange for his services to Atlas. Thus begins a long and storied career that turns on a dime a few missions later as the former enemy of the free world introduces Mitchell and company to the new enemy of the free world.

It’s a shocking twist that will… ok it’s not. Within the first 15 minutes of the campaign you can pretty much see how everything is going to play out. It’s the uncanny (in a good way) digital actors who give weight to a story that would have otherwise fallen flat. Sloppy writing, glaring plot discrepancies and the odd “hold X” moments are much easier to overlook when the monsters of military video game acting are on the screen. 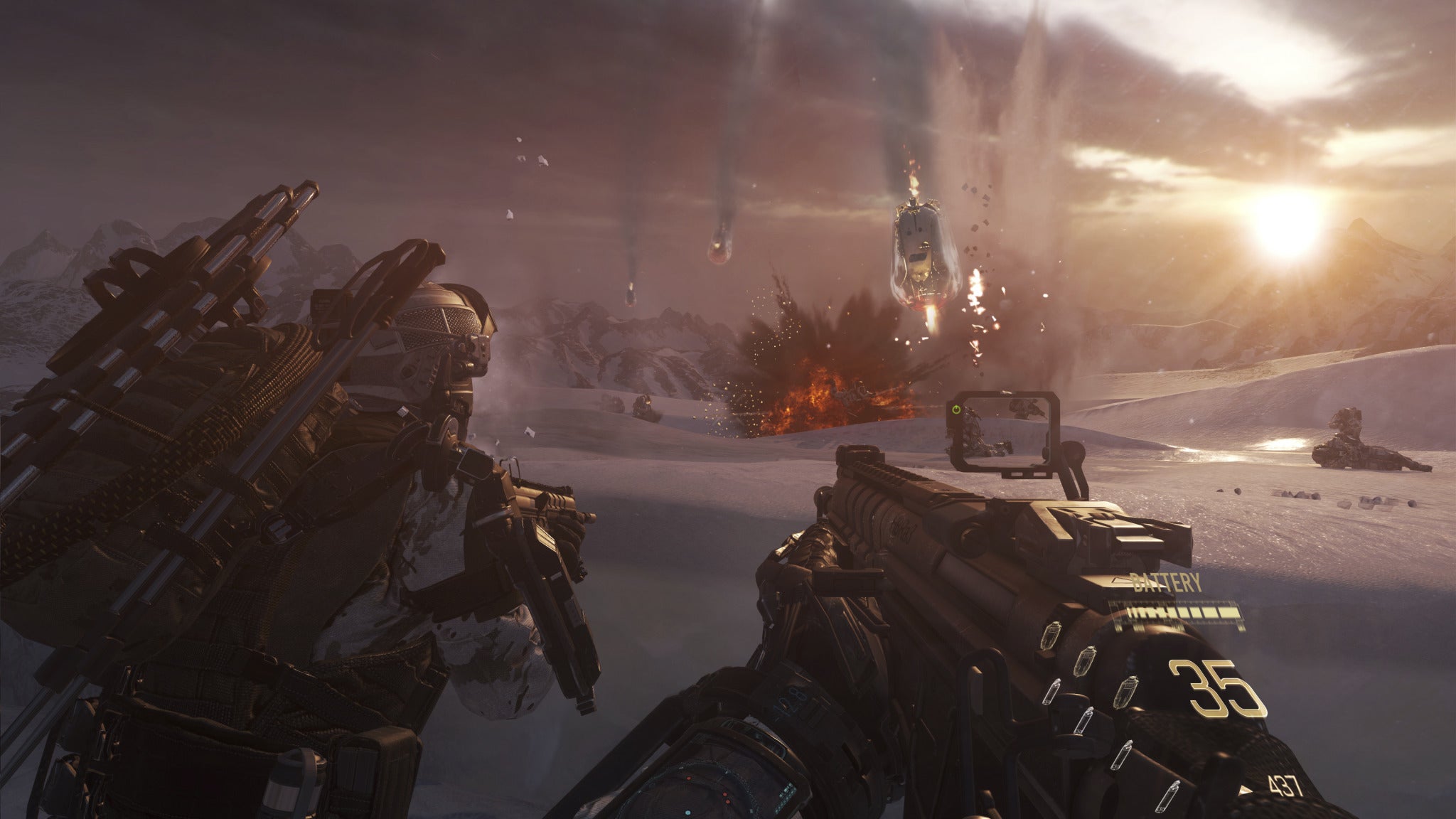 And when they aren’t we’re too busy battling through exotic locales and participating in massive set-piece battles to care. From pitched battles across busy city streets to an incredibly cool sequence deep within Antarctica to the explosive mech suit sequence we all knew would be the moment the first shots of it surfaced, Advanced Warfare never shies away from spectacle.

We’ve run through corridor-like city streets before, grabbing cover and shooting until there’s nothing shooting back. Now we’re double-jumping through city streets courtesy of future tech exosuits, tossing threat detection grenades to highlight our enemies as glowing red silhouettes. We’re killing until there’s no one trying to kill us back, but we’re doing it with lasers and heat-seeking explosives and even the odd primitive mech suit.

The game we’re playing hasn’t changed. The way we play it has.

The primary difference is the game’s newfound mobility. Through the application of rocket booster-equipped exo suits, Call of Duty finally realises a truth that platforming games have known for decades — double jumping is the best. Two of this year’s big first-person shooters — Bungie’s Destiny and Respawn Entertainment’s Titanfall — wooed players with fresh new ways to traverse traditional battlefields. With its newfound vertical movement, Advanced Warfare manages to keep up with the competition. It’s such a profound difference that I worry for future Call of Duty games that aren’t set in future times — bunny-hopping just isn’t cool anymore.

I only wish the campaign’s killer tech weren’t so tightly controlled. The bio-sensors make a single appearance. The magnetic grips show up a couple of times. Only two levels make use of the grappling hook, offering us a brief glimpse of intoxicating freedom before leading us back to a mostly linear experience. This set of amazing toys deserves a bigger playground.

There’s a new energy and excitement to Call of Duty multiplayer matches with Advanced Warfare that I’ve not felt in years. There’s a giddy feeling that comes as the timer counts down to the start of any of the game’s dozen or so multiplayer match types. And when that countdown ends, we’re not simply deploying — we’re rocketing out of the gate, boost-sprinting and jumping our way towards enemies and objectives. 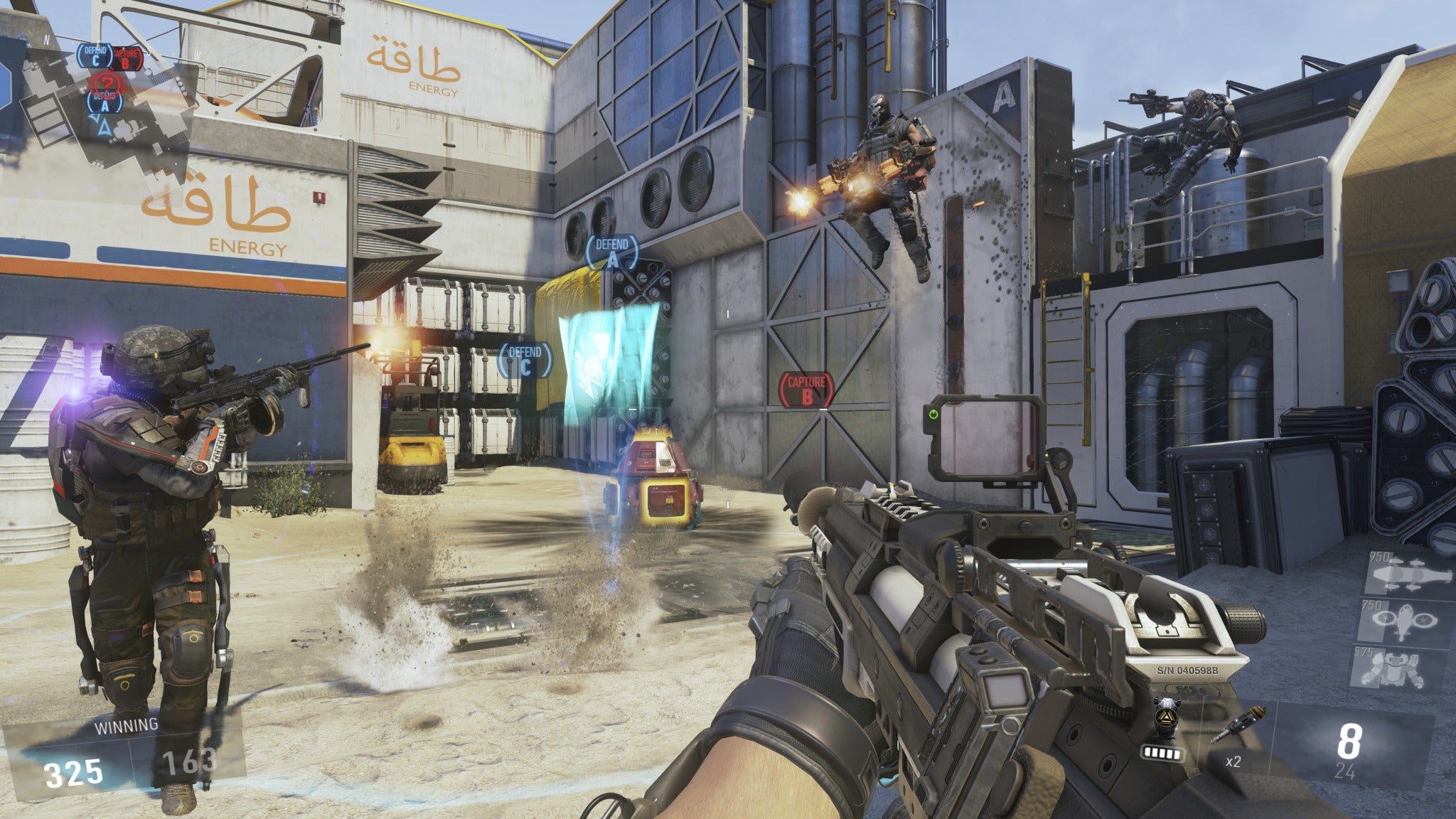 Between this instilled eagerness and the game’s extensive Pick 13 create-a-class feature, allowing players to build a soldier with just the right equipment, it’s easy for lesser-skilled soldiers like myself to believe we can actually get the job done. And if that proves untrue, at least we’re earning ranks and supply drops at a fast enough rate that showing up at the end of the end-of-game report isn’t quite as painful.

Oh, those glorious supply drops, filled with random weapons and equipment. The joy of opening a box of random goodies might be lost on more hardcore players but, for a borderline casual like me, it’s a drug. Each new weapon added to my arsenal is another round I must play in order to see if it’s “the one”, and even when I think I’ve found it (I’m quite fond of a particular SMG right now), there are variations of that weapon to be found and attachments to add in order to tweak performance and stability.

I’ve never delved this deep into the mechanics of a Call of Duty game. I’ve never really wanted to. The more I explore these systems the more comfortable I get with the game and the higher my name reaches on the end-of-round report.

Still, should the failure start to overwhelm, Advanced Warfare‘s new Combat Readiness Program is a fun and anonymous way for novice players to gain a little more confidence. A quick-and-dirty team deathmatch featuring a mix of players and bots, this special mode disables voice chat, replaces player names with generic “Friendly” and “Enemy” tags and replaces the standard summary with a player progress screen. It’s stupid in the most brilliant of ways.

In an odd juxtaposition, I find myself enjoying the multiplayer modes I normally abhor and not taking to the one I assumed I would love best. I expected the cooperative Exo Survival mode to be right up my alley, given my great love for Call of Duty: Ghosts‘ Extinction campaign, but where Extinction had a cohesive story running throughout, Exo Survival is just a random series of battles with different enemies to kill and objectives to achieve. I enjoy a bit more structure with my co-op. Perhaps the upcoming zombies DLC will scratch that itch more successfully.

There is a stupid moment in Advanced Warfare — but there’ve been stupid moments in nearly every Call of Duty game. Let’s show off the atrocity of war by making the player mow down innocent civilians, Modern Warfare 2. Hey Modern Warfare 3, let’s call to mind the 2005 tube bombings by blowing up the Davis family’s London vacation, little girl and all. Why not put a mission in the game that revolves around assassinating Manuel Noriega, the former Panamanian dictator still alive enough to get incredibly ticked over his depiction in Black Ops II.

Call of Duty has made some bad decisions.Handing the development reins to Sledgehammer Games was not one of those. Sure, we’ve still got a trite story sprinkled with stupid moments, but those stupid moments play out in spectacular fashion, powered by the convincing performances of some of the best virtual actors in the business (and Kevin Spacey). We’re still shooting at each other for points/flags/dogtags/sport, but the way we’re shooting at each other and what we’re shooting with have been vastly upgraded.

Advanced Warfare isn’t a different Call of Duty game. It’s a better one.

Now which button do I hold to wrap this up?