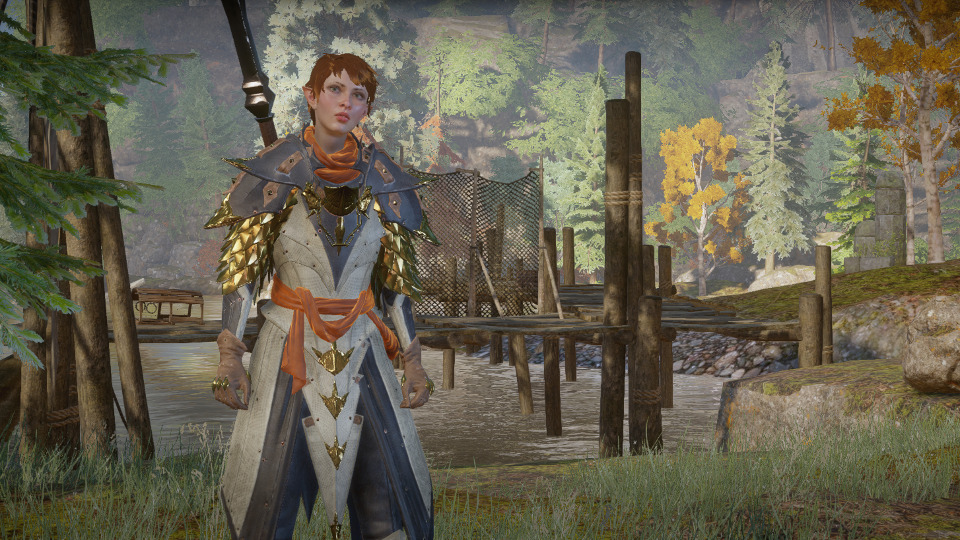 Dragon Age: Inquisition's second big patch went out today, largely focused on the RPG behemoth's PC version. I took it for a spin and discovered a few tiny tweaks paired with a big change for the worse: my character's scars are gone — her face pristine as fresh plastic — and I'm not alone in that.

The patch, released earlier today, was primarily focused on squashing some minor bugs and improving the PC version user interface a little bit. You can read the full patch notes here. Unfortunately, I found the interface tweaks to be minor — not the overhaul things like tactical view so desperately need — with the ability to make the tactical camera "strafe" being the only change that really felt significant.

And while BioWare claims to have taken care of hitching issues in conversations, I didn't see it. Conversations in my game continued to go into slideshow mode in places, something that definitely takes me out of the moment. If nothing else, overall game performance seems a little better. On my thoroughly aged (though not in the cool dragon way) mid-range machine, I was getting a few extra frames per second in most areas. It wasn't a huge leap, but it was nice.

I'm also glad BioWare improved item-finding, if only slightly. Now pressing the V key highlights items that are further away and — rather wonderfully — marks them with little dots on your mini-map, like so: 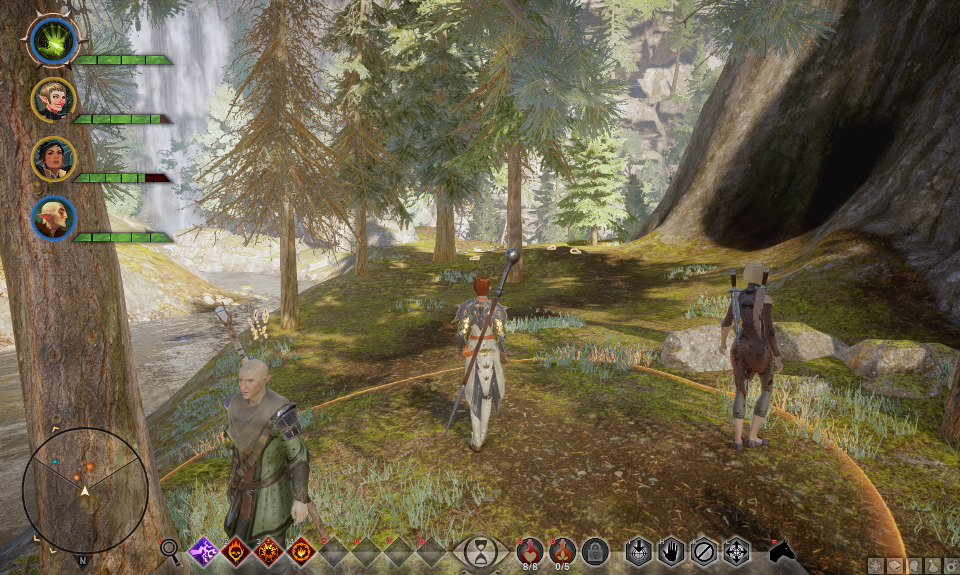 Oh, and if you're an appearance obsessive like me, you'll be happy to know that characters' hair is no longer quite as weirdly shiny on lower graphics settings: 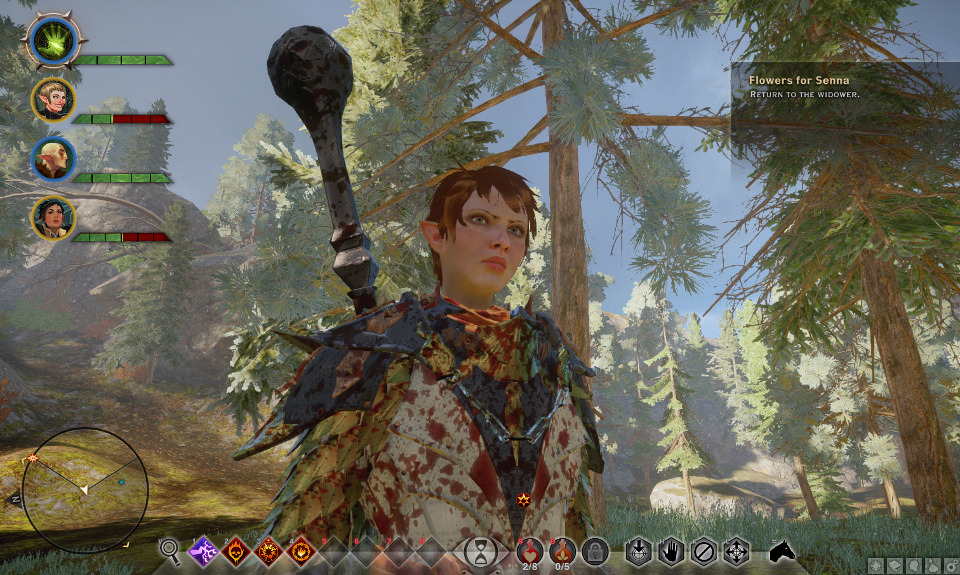 Now the bad news: for some reason, scars are gone. Here is my thoroughly battle-tested, tough-as-nails elf lady pre-patch: 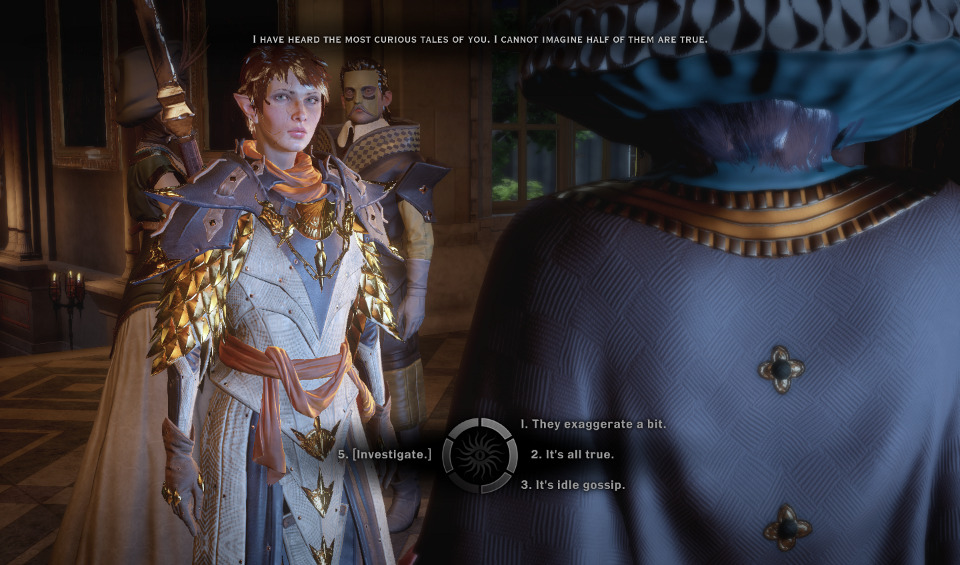 (Apologies. I don't have any good close-up shots.)

And here she is after: 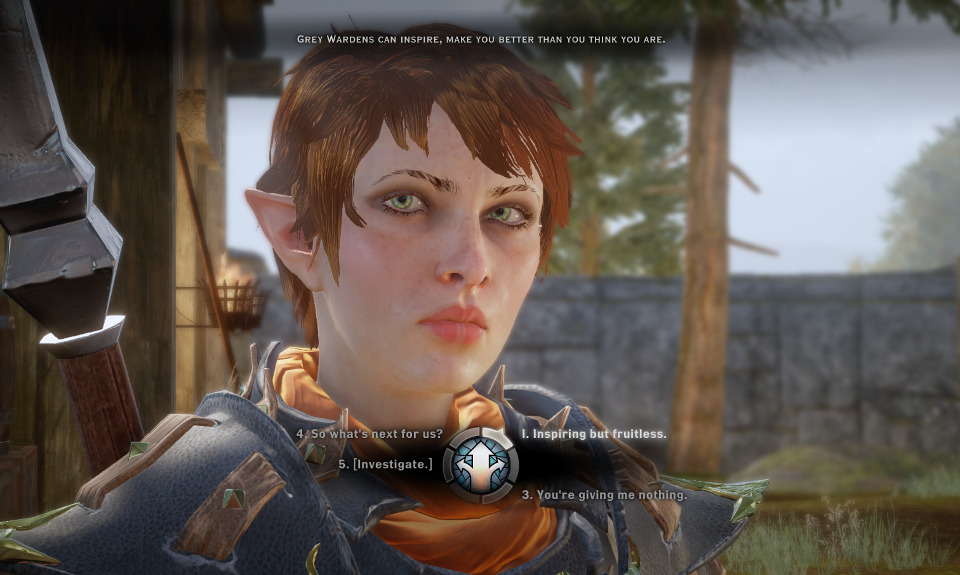 The scar issue appears to only affect your character, not, say, Cassandra here: 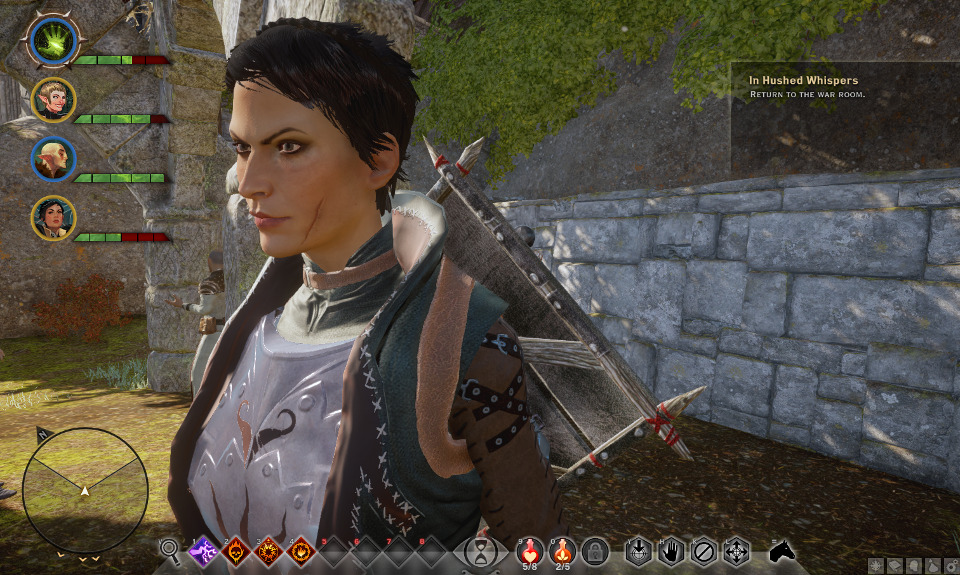 It's not just me, either. Tons of people are reporting the issue, as well as some other facial graphics problems, on both Twitter and Reddit: 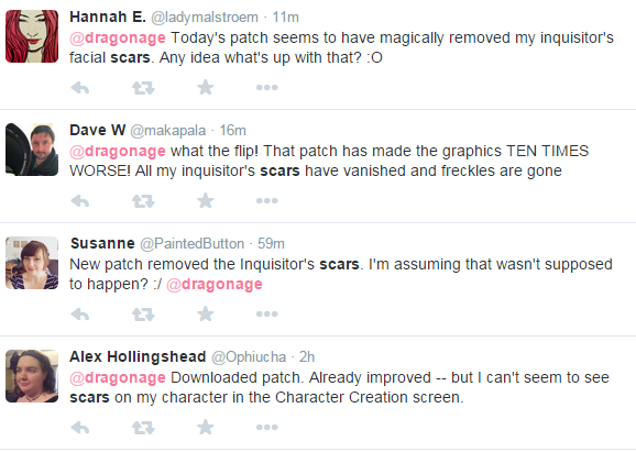 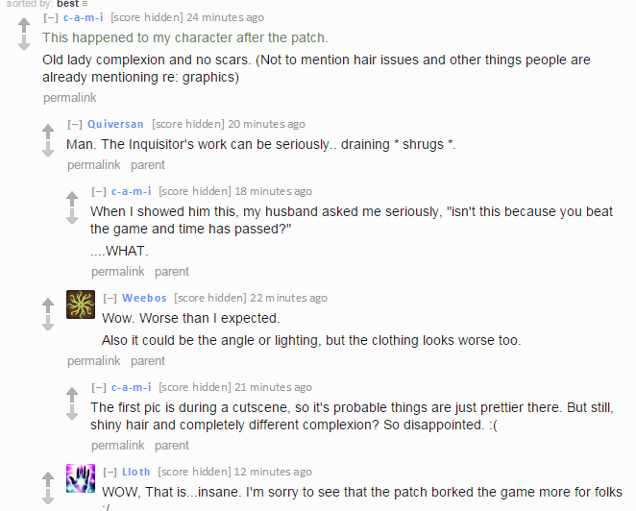 I don't know about you all, but for me this is a HUGE DEAL. In some ways my character is defined by her scars. I role-play her as someone who faced the worst of what Dragon Age's harsh world could throw at someone who's both an elf and an apostate mage. Racism, fear, needless brutality. As a result, she's wary nearly to the point of paranoia, bitingly sarcastic, and quick to lash out in word and deed. To me, those scars represented her history, the foundation from which she grew, and opportunities to grow into a better person — rather reluctantly, at first — by leading a bunch of strangely pleasant crazy people on a quest to save the world.

I've reached out to BioWare to see how they plan to fix the issue. I'll update this post when I hear back.

On the upside, bigger changes to other issues, for instance PC controls, are apparently in the works. BioWare wrote: "After Patch 2 goes out, our next priority is to improve the PC mouse/keyboard controls further. We're investigating how to expand on PC usability and functionality to address specific requests from the community."

Major problems like the dreaded banter bug — which causes party members to be voiceless lock-step toy soldiers instead of, you know, people with interesting conversations — will also be addressed in future updates.

I'm glad BioWare's paying attention, but the lack of big improvements in this patch is kind of a bummer. And of course there's the scar thing, which is gonna drive me batty until my character's face is once again a map of jagged craters and rivulets. How's the new patch treating you?

Update: BioWare has said that they're working on a solution to the problem, and in the meantime they have offered a (relatively) quick fix you can manually apply by tampering with your command line. Word of warning, however: you will have to re-alter your command line after BioWare nips this unexpected nip and tick once and for all.