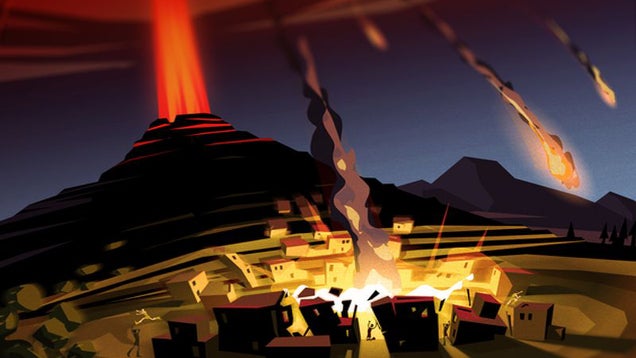 Legendary game designer Peter Molyneux, creator of the god game genre, has a history of over-promising and under-delivering. So when he took his latest game, Godus, to Kickstarter, people were a little wary. Turns out, they were right to feel that way.

After a £526,563 Kickstarter that conjured up divine dreams of a Molyneux return to form and more than a year in Early Access, Godus isn't exactly taking shape. Rock Paper Shotgun recently called attention to the issue, noting that promised additions like a Linux version and an art book are nowhere to be found, and hyped-to-the-heavens features like ambitious multiplayer — with a "god of gods" originally decided by previous Molyneux letdown, Curiosity — were haphazardly added and then removed.

Things only grow more worrisome from there. As of now the game's development team has downsized, with key members like producer Jemma Harris departing while others have moved onto a newer Molyneux project, The Trial. In an interview with GameSpot, Molyneux claimed his studio, 22Cans, is currently searching for new people to fill those rather large sandals, but what happens beyond that remains to be seen.

However, rumblings from sources that spoke with GameSpot paint a different picture, one of a dispirited production running low on resources and, perhaps more importantly, morale. It's tough not to nibble into that side of the story — if not chomp it hook, line, and sinker — when people like current core designer Konrad Naszynski go on record saying these sorts of things:

"To be brutally candid and realistic I simply can't see us delivering all the features promised on the kickstarter page, a lot of the multiplayer stuff is looking seriously shaky right now especially the persistent stuff like hubworld."

"Godus is rather confused right now, it plays like an ongoing persistent game without real end point and yet it's divided up into discrete levels. This is one of the big decisions we will need to make in the next couple of weeks. And again realistically I'm having to ask myself, 'how can we turn what Godus is right now into a good complete experience' rather than 'how can we deliver on the kickstarter pitch goals?' We are in the process of re-evaluating the 'big picture' direction of and end goal of Godus. It's not an easy or straightforward task, but I will let you know when I can."

To address concerns raised by the community over long-missing features, directionless development, and statements like the one from Naszynski, Molyneux and co put out this video:

In it, Naszynski reiterates the ways he feels Godus is falling apart while Molyneux remains believably though haggardly optimistic. The contrast is kinda striking, honestly. The key thing here, though, is that Molyneux confesses that Godus isn't where it should be, its team and funds have been reduced, and that a mountain of mistakes have been made along the way to this point. He confesses prior ignorance to Kickstarter and Early Access, admitting that he did things "badly and incorrectly." He notes the game's PC version should have been his team's first goal — not the apparently more lucrative mobile version — and then drops a bombshell:

"I take the point that some of the pledges should have been met, and that we should have taken the time to work on them."

Which is an absurd statement to make, given that all of the pledges should have been met — or at least prioritised as things of utmost importance — seeing as that's the entire point of Kickstarter. 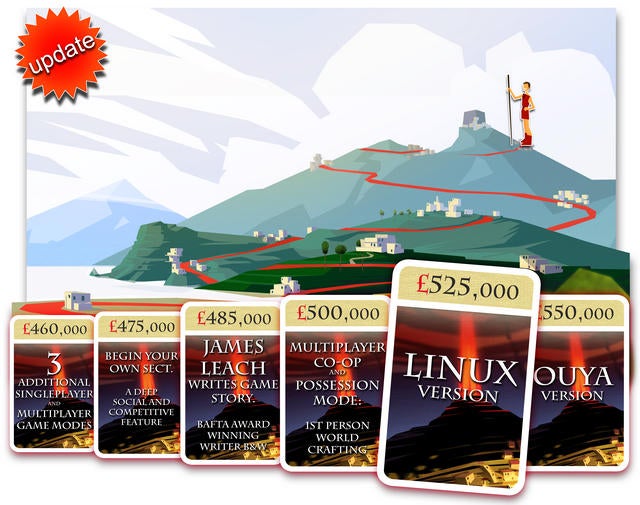 When it comes to concerns about specific long-overdue features and rewards, Molyneux largely skirts the issue in the video. Speaking with GameSpot, however, he addressed a couple of them. On multiplayer, he said:

"The problem with the multiplayer is, when you develop features you need to also make sure they are multiplayer-compatible. The next step for us is adding combat, after that is the time we should look at multiplayer again."

The Linux version, however, may never materialise:

"I'm not worried about [pledge rewards like the art book eventually being finished]. I do worry about the Linux version pledge, because we do need the middleware that we use [Marmalade] to update to support Linux, which it currently does not."

So that leaves Godus in an awkward spot at best, a dismal one at worst. I'm planning to chat with Molyneux soon, but in the meantime, if you're a Godus player or dev team member who wishes to speak about the situation on the record or anonymously, feel free to get in touch.