A Messed-Up Game Where You Play A Disturbing Clown 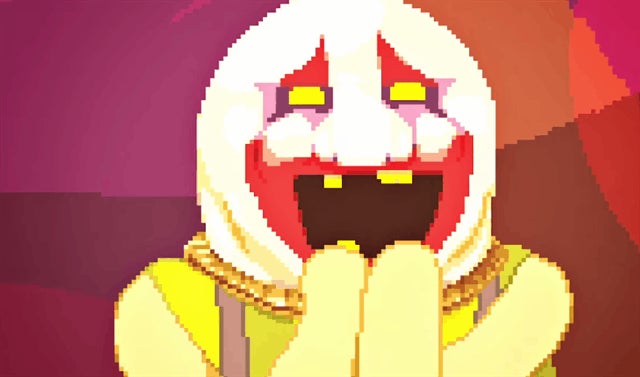 I'm not the type of person who is terrified by clowns. But Dropsy the clown...Dropsy is another matter entirely.

There's just something unsettling about this adventure game. It's hard to put a finger on it. Maybe it's the way Dropsy hugs everything, living or not — and the animation highlights his bumcrack. Or maybe it's just...his entire...face? I don't know. Just...please, no.

So, what's the game about? Glad you asked:

After a deadly circus fire shatters his world and tarnishes his name, Dropsy the Clown finds himself on a journey of self-discovery through a story that harnesses powerful themes of love and kindness. With his father gravely ill and the world turning its back on a once happy-go-lucky clown, Dropsy will need to help those in need, hug total strangers, and unravel dark and shameful secrets from his past on the way to redemption. Oh, and Dropsy can also talk to animals.   Dropsy is a non-traditional take on the classic point and click adventure formula starring the game's perpetually carefree namesake clown as he explores a richly detailed world full of colourful characters and sinister secrets, doling out hugs along the way. Rather than lead players on a singular narrative path, players are free to choose which avenues of adventure they want to explore in an open world setting and can piece the puzzles and story together however they choose.

In short: Dropsy sounds pretty damn cool. I've never even heard of an open-world adventure game, so it will be interesting to see how this game handles that. I'll be checking it out once it drops on Steam on September 10th.