That Time Burnout’s Developers Made A First Person Shooter

In retrospect, it made complete sense. Too bad it never happened again! Through Criterion has been making games since 1996’s PC-only action game Scorched Planet, the studio really made a name for itself when Burnout was released in 2001. The frantic racer was defined by its technical prowess and tight gameplay, prompting Criterion to release three sequels — Burnout 2: Point of Impact, Burnout 3: Takedown, Burnout Revenge — by 2005.

It was shocking, then, when Criterion announced it was making a first person shooter where Criterion promised players could blow everything up.

Black was announced at E3 2004 with a reportedly impressive technical demo that a few journalists played. The demo was so barebones that it didn’t even feature any working AI for the enemies.

So what was so great about it? The deafeningly loud gunfire affected the environment in a manner far more spectacular than we’ve seen in any shooter to date. Criterion acknowledged that what its developers are attempting to do with Black is capture the sheer, gut-wrenching drama of intense Hollywood gunfights. That means as bullets all hit their marks, they do what you’d expect bullets to do — from having grown up watching action movies. They cause debris, dust, and smoke to spray every which way. They cause glass to shatter all over the place, and they sometimes ricochet and hit things that were not intended targets. The logic goes like this: In Black, missing one’s target ought to be as thrilling as actually hitting it.

You can get a sense of this in the game’s trailer.

We take destructibility for granted in 2016; back then, it was revelatory.

Per an IGN preview by Jeremy Dunham from January 2006:

That can is probably one of my favourite aspects of BLACK so far, and it’s the straightforward ability to blow up just about anything. Apparently the rule at Criterion when making the game was, “if players saw an object or structure they thought they should be able to destroy then they could.” If you see a gas station with a couple of pumps in front of it, for example, you can kiss that sucker goodbye and engulf it in a massive ball of flame. If you see a mine on the ground next to an enemy target that is blocking the next spot on your objective list, you can shoot it to set it off (and others around it) for huge chain reaction results. And if your enemies are taking cover behind wooden crates or buildings, you can be sure that it will chip away while you shoot it.

One of the first things you notice while playing the game is the sound design — the guns really “pop” and the explosions are deafening, even now.

The game was beloved when it was released, praised by reviewers and players alike. Almost immediately, people were clamouring for Black 2, especially since the original game hit just as new hardware was arriving.

Early in the Xbox 360’s life, Black was one of the most demanded for backwards compatibility. Per a Eurogamer piece from 2006:

“I keep reading all over forums that we’re going to make a 360 version of BLACK, and it’s just not true,” Ward told Eurogamer this week.

And he gave us the first confirmation that the Guildford-based team is planning a next gen sequel when he said: “The only time you’ll see [the BLACK franchise] on the Xbox 360 is when we make BLACK 2 on it in a few years.”

Black 2 was apparently rushed into development, and while it was discussed at various points, the game was never formally shown or released.

Unseen 64 has a comprehensive look at what little we know about Black 2, but evidence suggests it was to be a co-op shooter for Xbox 360 and PS3.

Despite recurring rumours of Black 2 rumbling for several years after the release of the original game, its development was, in actuality, rather short-lived and it never was able to leave pre-production. As it turns out, EA and Criterion had plans to expand Black into a franchise for some time before the first game was even released. Preliminary work on the sequel commenced as early as April 2005, a whole 10 months before Black was finished.

Artists were contracted externally to produce conceptual documents for the game, including drawings of the protagonist, Jack Kellar. According to one of the artists who spent a short period of time on the project, there was some debate over the direction the follow-up would take. One possible path, for example, would have continued the story of the first game, as Kellar continues his hunt for Lennox at the behest of the US government.

A concept trailer was made for the game, too, but has remained a secret. However, Criterion founder Alex Ward once posted several images from the trailer on Twitter, though they have since been deleted. Thanks to Unseen 64: 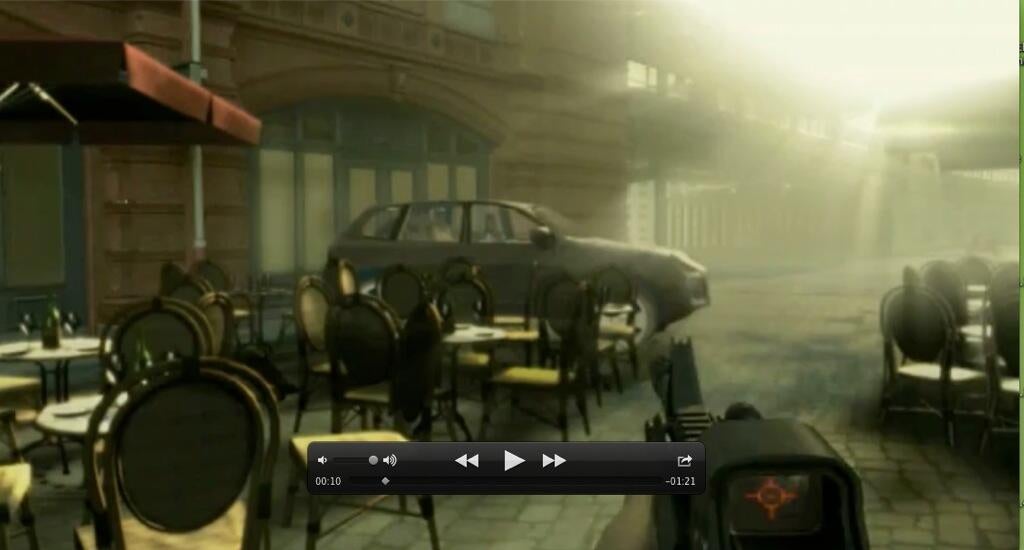 We haven’t heard much about Black 2 in recent years, partially because the project seemed buried, partially because Criterion isn’t the same studio any more. A bunch of staff were laid off (or transferred to another developer) in 2013, and several chief creatives, including Ward, left in 2014.