Project CARS 3 Plays More Like GRID Than A Sim Racer

‘Tis But A Flesh Wound

Hearts of Iron IV is a strategy video game, but unless you’re a veteran of Paradox’s special take on the genre, it’s not what you’re used to. Company of Heroes this ain’t. Instead of taking direct control over units and smaller-scale tactics, HoIIV puts you at the very top of the war’s food chain, where you need to look after nearly every aspect of your nation’s strategic management.

This goes way beyond the mere movement of your fleets, armies and air forces. You’re also in charge of diplomacy, research, recruitment and, most importantly, production. Not for a base, not for a region, but for the entire war. Think about the scale of that task: you’re responsible for taking millions of men, building them weapons and equipment, arming them, training them, moving them around the world and then keeping them supplied, reinforced and protected by navies and air forces.

And that’s just scratching the surface. In HoIIV you can also design your own division templates, deciding how best to mix combat and support units throughout your armies. You can trade goods internationally, balancing the competing needs of your guns & butter economy. You can even knuckle down, take individual armies and draw them little custom battle plans, complete with sweeping arrows and projected front lines.

If that sounds like a lot to squeeze into a single video game, that’s because it is. Hearts of Iron IV is overwhelming in both its depth and, more importantly, its complexity. It’s all well and good to list all the stuff you can and must do in HoIIV, like I just did above, but it’s important to remember that the more a player is able to do, the more buttons and menus are required to allow them to do it. And this game is drowning in them. 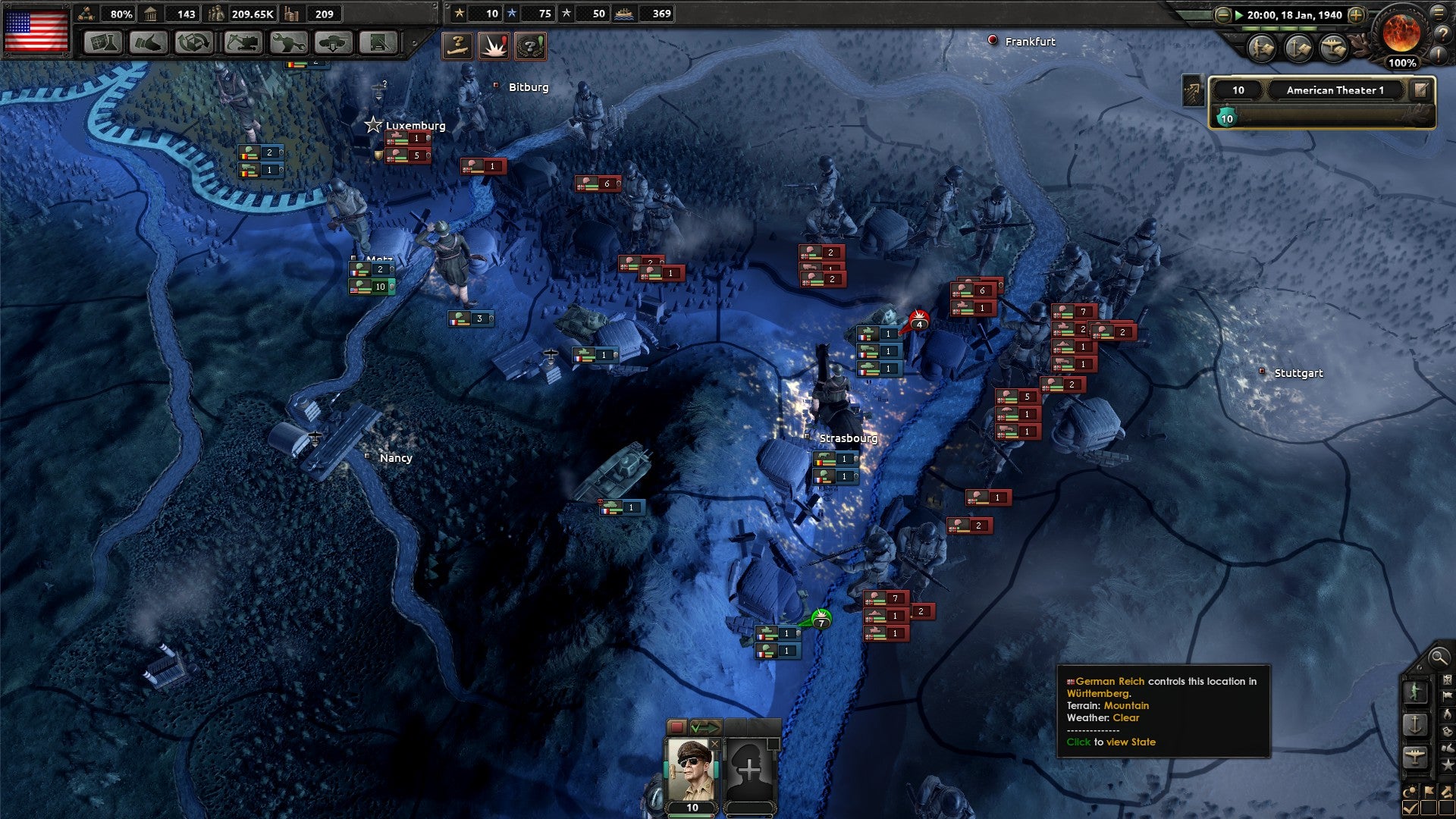 This is as close to the action as you can get. It’s a nice break from the strategic map seeing everything break down with little animated tanks.
Hearts of Iron IVCrusader Kings IICKIISuper Mario

I understand why this is. Games like Hearts of Iron IV are Paradox’s bread and butter, and the kind of person who wants to spend hours agonising over military supply chains is *points at venn diagram hanging on the wall* often the same kind of person who won’t mind grappling with a deeply abstract and obtuse means of controlling a video game.

But it’s 2016, I’ve been playing these games for years, and I’m getting sick of just waving my hands and repeating that mantra as though it’s just the way things are, and forever will be. Paradox’s strategy games can, and need to do a better job of being more approachable. Not dumber, not simpler, just better organised. Smarter interface design. Better tips. And for the love of God, a functional tutorial. Stellaris had one, so it’s a shame to see HoIIV take a few steps backwards when of all the studio’s recent games it probably needed one the most.

For almost my first week with this game, I felt like I was battling the interface as much as the Nazis. It’s just so wild, and inconsistent in the way it’s structured. Sometimes a left-click will do something, other times a right-click. Things that should be presented the same way between screens and menus are not. Some mouse-hover prompts (and event notifications) are highly useful! Others are not.

So if you’re tempted by the idea of HoIIV, you need to know this. Simply learning this game’s absolute basics, like equipping divisions of infantry with guns and sending them somewhere to fight, is an ordeal. Getting further than that is going to take some serious work.

But if that sounds like a challenge, and not an obstacle, then oh boy, are you in for one hell of a war.

I played two campaigns in Hearts of Iron IV for this review. My first was as the Americans, and began in 1936. This gave me enough time to get the country ready for war, so by the time the Germans invaded Poland in 1939, we were ready to roll.

I got America’s vast resources into the war as early as I could (isolationism is not fun in this game), with the first expeditionary forces reaching North Africa and Europe in 1940. The North African campaign went much as history’s did, but what happened in France started making me realise that this game, despite its strong roots in world history, was capable of making some big surprises.

Instead of being steamrolled by the Germans, the French (and Danes) held strong. With North Africa wrapped up by early 1941, I shipped my expeditionary force into Southern France, where they helped withstand almost a year of constant, almost First World War-like grind. A shocking 400,000 casualties later (just from my Americans, the French lost millions), the German’s manpower reserves (each nation has a finite pool of combat-ready humans) ran out, and they buckled. Joined by fresh Commonwealth troops from Canada and Australia, the Allies went on the offensive, Berlin falling to French tanks in December 1942.

Peace was brokered, Nazi Germany dismantled and with Japan eerily quiet and content to stay put, I got a little bored and decided to try a different nation in a different starting point. My second campaign, then, was as the British, and began in August 1939. And holy shit was this one a wild ride.

Again, France held strong against Germany’s initial onslaught, again, America entered the war early, and again, I spent a considerable amount of time in North Africa against the Italians. With Germany defeated early once again (late 1941 this time), I was worried that this game might be selling my wars a few years short.

Nope. Shortly after Berlin’s fall and the end of this game’s first war, Japan attacked. Though they shouldn’t have bothered. Without a two-front war to worry about, American and British troops transferred from Europe and blunted the Japanese offensive almost immediately. Japan itself was invaded in 1942 and surrender came quickly after. 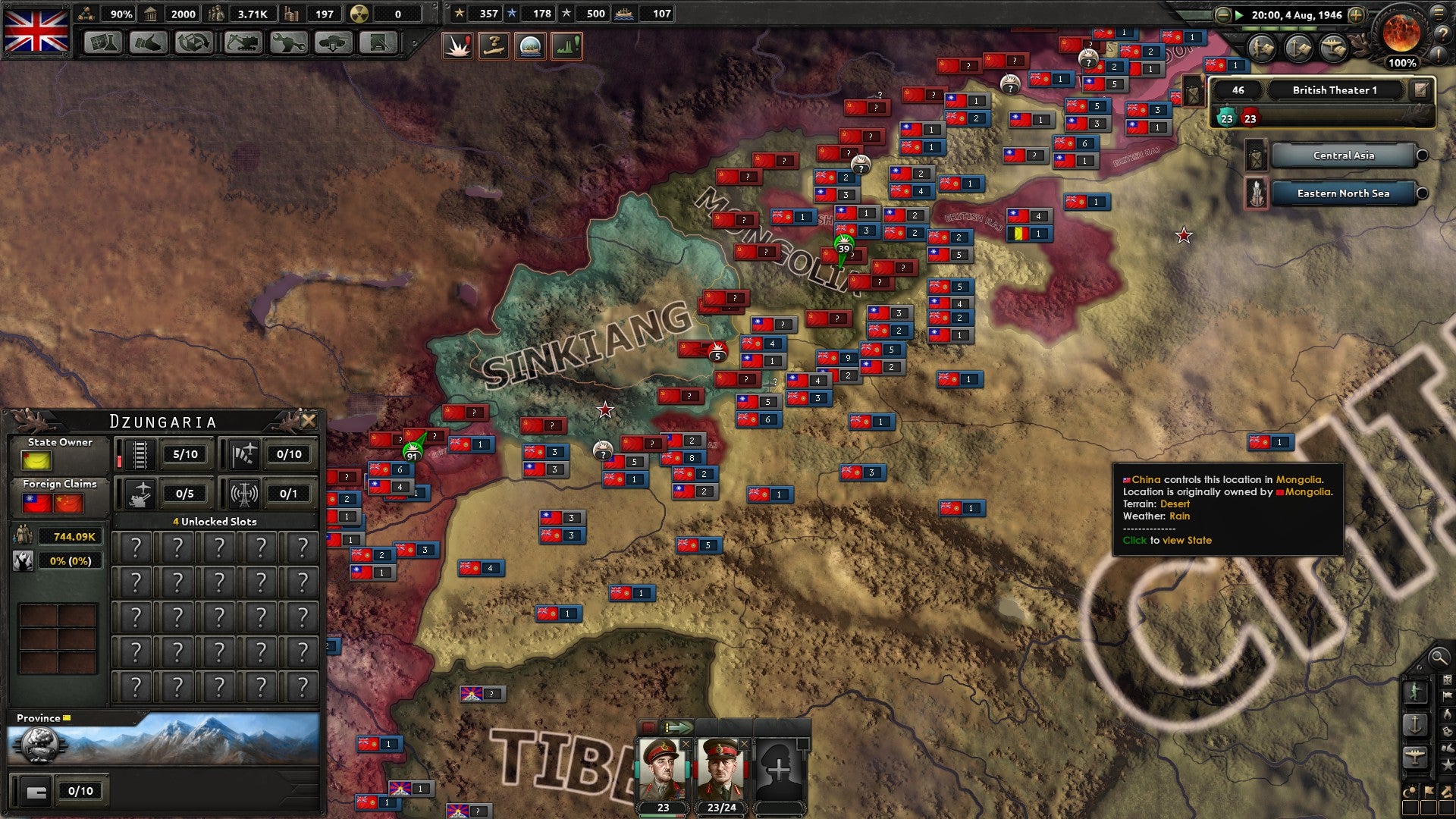 British Indian troops and Chinese Nationalists struggle to contain the Red Menace at the Chinese border.

Allied and Soviet forces clashed everywhere. The French were up against it leading European forces in Germany, Italy and Scandinavia. British armies were hanging on throughout the Middle East, India and Central Asia. American and Japanese troops were fighting in Korea and China. 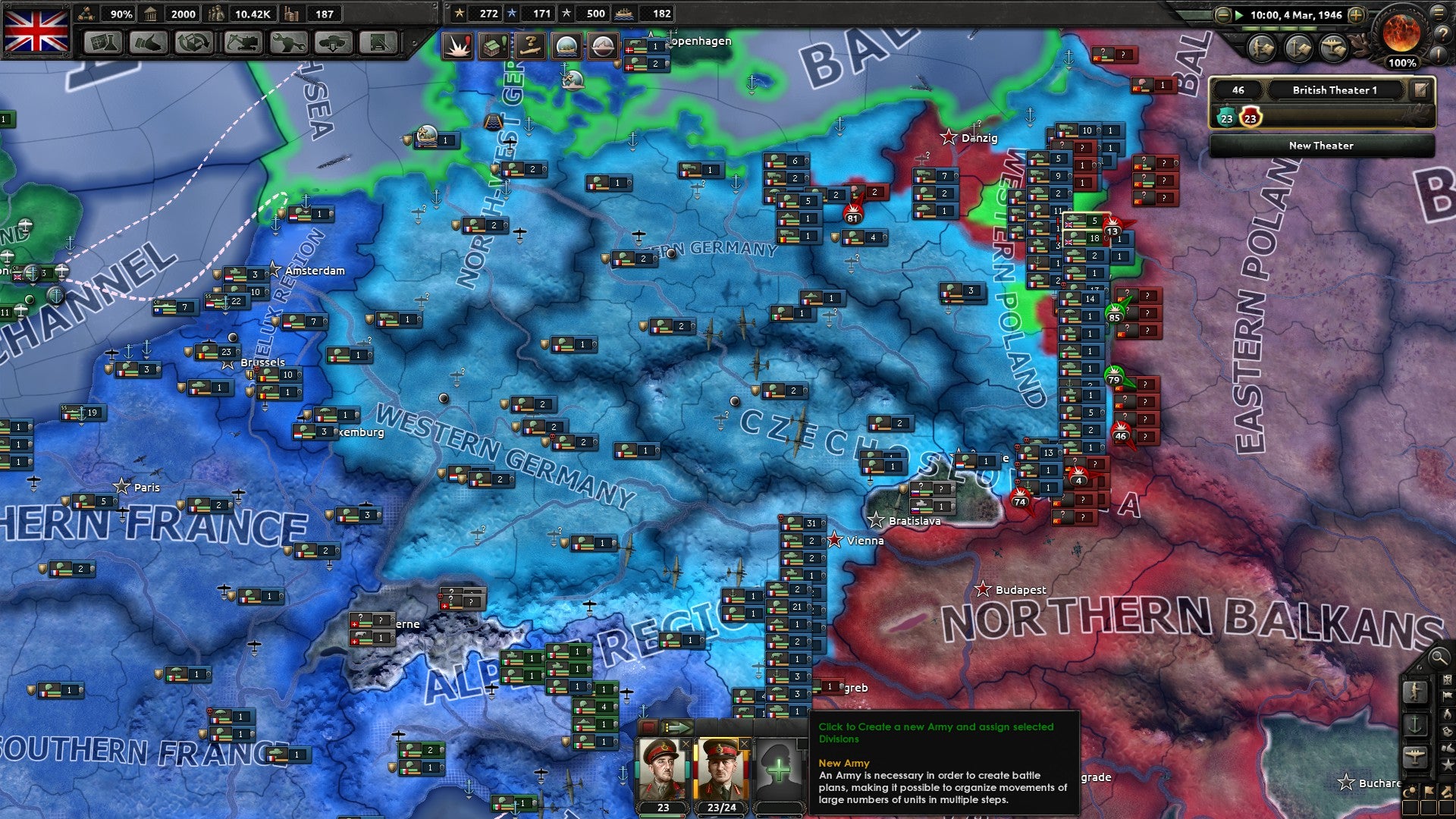 Those are two pretty different experiences, both from each other and how the actual war turned out. Which is key to a game like this: you want the ability to simulate the circumstances around the Second World War, but nobody wants to simply retread the thing over and over.

And that was me coming at the war quite conservatively. There are so many other ways things can go down: nations can flip politically (a communist France would align with Russia instead of Britain, for example), and depending on whether you begin the game in 1936 or 1939 you could be looking at a very different world at the war’s commencement than the history books record. 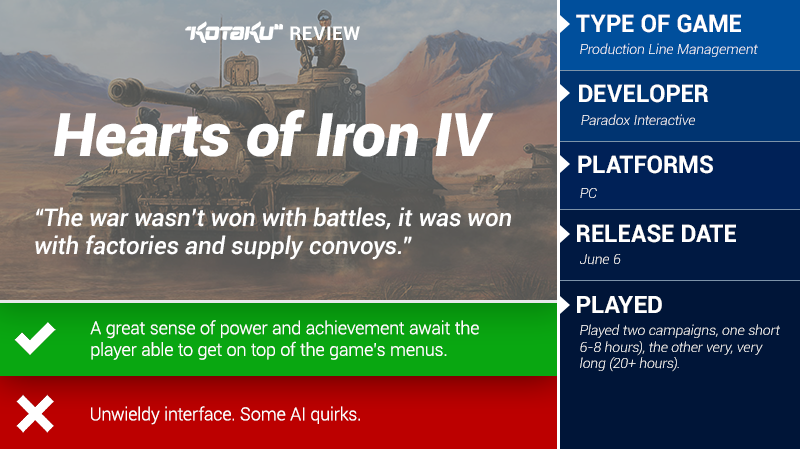 That’s one of the things I enjoyed most about the game. On the surface it feels very limiting, considering other Paradox games let you live out whole historical eras, but in practice there’s a surprising amount of flexibility and, well, surprise in the ways each war can play out differently (though you can select a pre-game option that makes things pan out historically).

The thing I dug the most, though, was that for all the game’s kinks and inconsistencies, once I’d wrangled the interface and learned how to do everything, I felt empowered. I was more in command than in any other purely military strategy game I had ever played. Let the Captains and Colonels handle the small-scale stuff. I was looking down at the war from the very top, and as boring as logistics and research may sound, it was a blast.

There’s something weirdly satisfying about seeing your little armies victorious not because you clicked your mouse faster than the AI, but because your multi-faceted approach to designing and equipping a force of millions was a sound one. A slow death by manufacturing is more gratifying than a quick one with bullets. 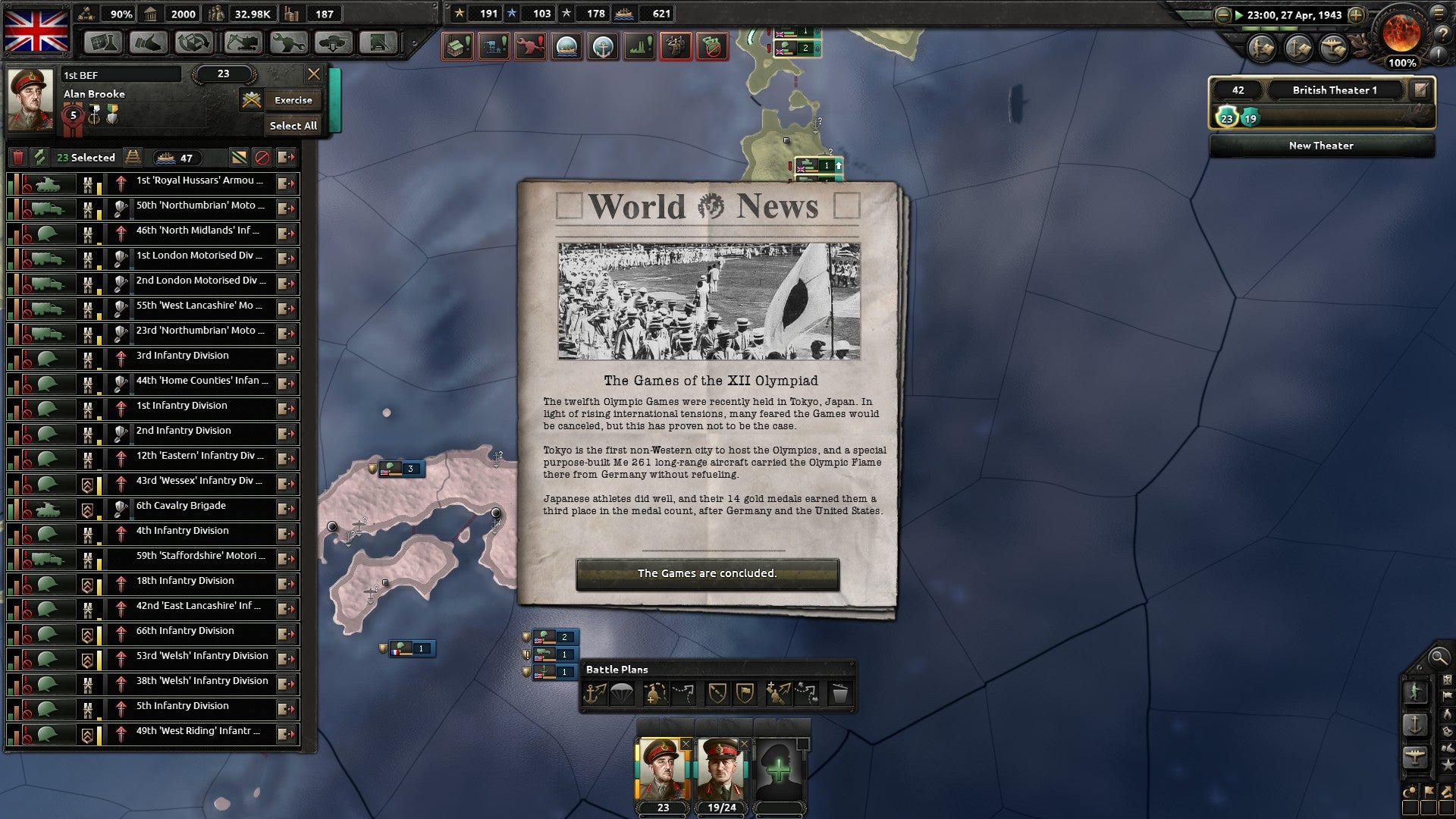 Japan may have had its arse beat in both my campaigns, but hey, at least they got to host the Olympics.

What was annoying, though, is the game’s AI, which at launch is a little wonky. Given Paradox’s existing record of constantly patching and updating their games for years, it’s not something I’m too concerned about, but if you’re looking at playing the game in the immediate future then you need to know that some aspects of AI behaviour, especially diplomatic behaviour like when to declare war, is a little mad.

Two examples from my campaigns: Colombia allying with Japan and sending troops to the Japanese mainland…just as my British armies laid siege to Tokyo. That was weird. There were also loads of instances of smaller nations like Hungary and Finland going crazy with their declarations of war.

You’ll also find some problems with the way allies behave, too. The game lacks the means to properly coordinate a war effort with your friends and colleagues, so you’re left to watch/hope that they do the right thing. Sometimes they do! Sometimes they just wander around the battlefield. This is obviously more of a problem if you’re playing as the Allies (especially a smaller nation). Hopefully a future update adds the ability to properly discuss and formulate cooperative battle plans.

Oh, and the game has an odd tendency to stick too strongly to the way a war begins, rather than what it becomes. So despite my big fracas against the Soviets pulling in most of the planet, the USA sat it out, because the obscure initial cause of the war — an invasion of a democratic Polish state — didn’t match with its foreign policy, even though everything that came after surely did.

In case it’s not clear by now, I’ve tailored this review for newcomers to the series, folks who may have been drawn to Paradox’s games through the recent success/exposure of games like Crusader Kings II and Stellaris. If you’ve got experience with Hearts of Iron III, I guess all I can say is that as much as I bitched about the interface up top, you’ll find this a lot easier to get around, especially when it comes to production.

For everyone else, Hearts of Iron IV is an incredibly rewarding strategy experience, letting you roll your sleeves up and re-fight the Second World War in a way that few other series have ever even attempted, let alone pulled off.

Just know that to reap those rewards, you’re going to need to put in some work, and put up with a few quirks while you’re at it.