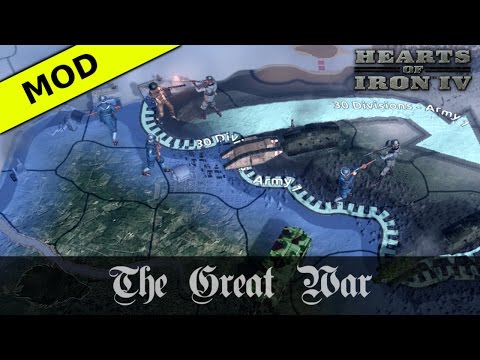 Paradox’s Hearts of Iron 4 is one of the best World War 2 strategy games you can buy and with the release of the fan-made mod “The Great War”, you can now reenact World War 1 with all the bells, whistles and artillery the latest iteration has to offer.

Created by “Wolferos”, version 0.1.3 of The Great War mod is currently marked as an open beta, though it’s packed with an insane amount of content. It comes with two scenarios — a prelude set in 1910, in the form of the Balkan Wars and Agadir Crisis and The Great War itself, starting in 1914.

In terms of featured sides, all the major players are represented, with new focus trees and 3D models:

Serbia sounds like an interesting one to play. Despite being a small power compared to say, the UK or France, it had a massive, catalytic role in the conflict that's not always represented well in fiction. Usually it's rolled into Russia (like in the 1914 version of Axis and Allies), so to see it treated independently is awesome, though not unexpected for Hearts of Iron.