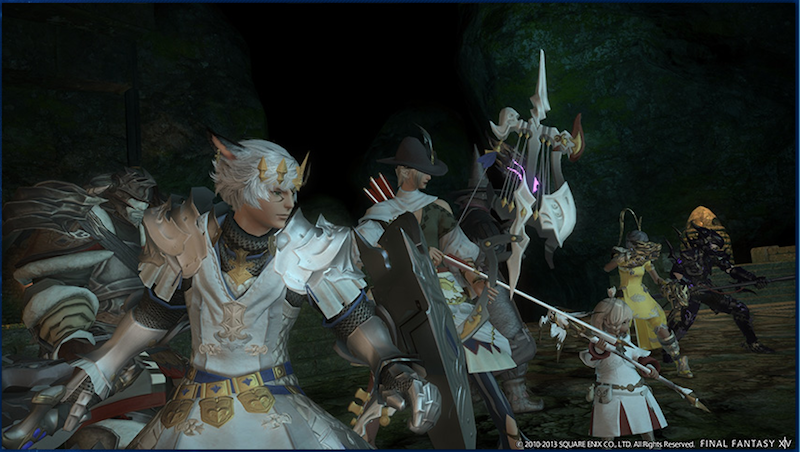 When Final Fantasy XIV director Naoki Yoshida revealed the MMORPG's upcoming Palace of the Dead dungeon last April, I had what I now realise was an embarrassingly romantic notion of what it would be: dungeon-crawling with friendly strangers, sneaking by traps and strategically navigating its roguelike-inspired, randomised maps to best an onslaught of challenging monsters.

Perhaps I was disappointed by my own expectations, something I've struggled with since FFXIV's release in 2010, and even after its exhaustive redesign two years later. Everything about the Palace of the Dead seemed, at face, jagged and engaging and fun and troublesome. Unfortunately, up to its 40th floor, when I stopped, it felt very, very safe. Even grindy.

In FFXIV, I've been hunting the rushes I received from Final Fantasy XI, a frustratingly idiosyncratic MMORPG that, at times, felt like a punishing inside joke. Some monsters attack by sight, others by sound, and if players don't consult their mental Excel spreadsheet of imminent death every few steps, imminent death will soon become inevitable. Often, in FFXI, players are forced to cross huge swaths of a zone saturated with belligerent mobs. Before hitting an outpost, they might die a half dozen times. And this all happens before level 20. 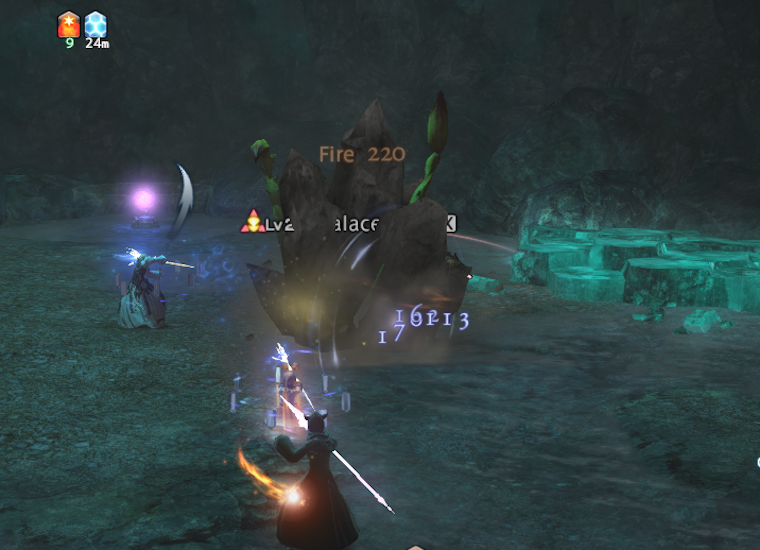 FFXIV patch 3.35's highly-anticipated new dungeon, 40 unpredictable floors (50 if you have the Heavensward expansion) stuffed with various undead monsters, sounded at first like a nod to FFXI's more severe features. Players can access the dungeon through a short quest once they hit level 17. Upon entering, their levels are reset to 1. In the isolated Palace of the Dead world, they can level up to 60, reaping experience points for their extra-dungeon character as well. They're warned that its pathways will be changing constantly, reflecting the dungeon's unique roguelike-inspired component, and that traps like exploring coffers will dot the maps. A checkpoint every 10 floors, after a boss, acts as a save point and rest stop.

You can solo it. Also, you can enter with up to three other players, friends or strangers. Players who solo report a more challenging and strategically complex experience — I opted to play with a matched party after my colleagues, Jason Schreier and Mike Fahey, and I tested it out live earlier this week. In June, Shreier spoke with FFXIV's game director Yoshida about the dungeon:

The goal, Yoshida says, is to create something totally new. It's meant to feel more accessible than high-level raids or other chunks of endgame content that require people to play through hundreds of hours worth of story.

"There are actually two large concepts behind the Deep Dungeon," Yoshida said. "The first is to have veteran and new players come together and play this content."

The second, he added, is to switch up the rhythm of typical dungeons and boss fights and create something that's easier for casual players to jump into. The dungeon will have its own story, but it will feel very different, which should be welcome to lapsed or new Final Fantasy XIV players.

Accessibility was achieved, but, in my opinion, at the expense of charm. The Palace's first few floors are your typical brownish, stone dungeon. Not just with regard to its look, which is torch-lit insipidness, but its play. As a black mage, I barely had time to cast "Fire" before our fighter two-shotted enemies. After he killed one mob, we achieved level two. 8 minutes in, we were already on the 4th floor. I felt like I was being rewarded simply for playing. 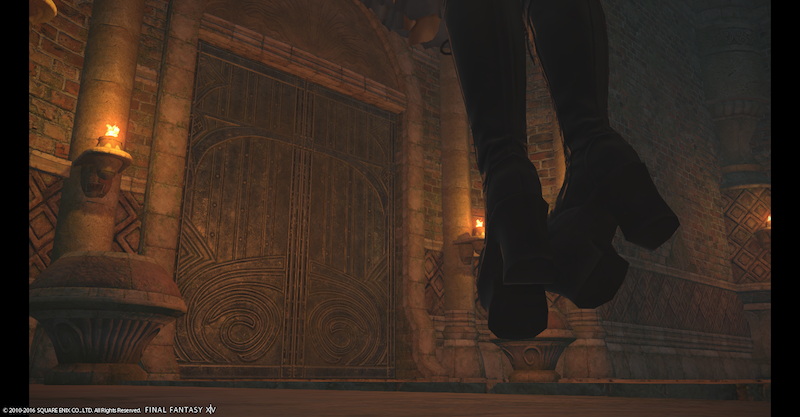 Throughout the dungeon, my armour and weapon, which remained aesthetically but not functionally the same as your outside-world gear, leveled up when we found silver chests. This turned out to be an issue for me. After the first ten, effortless floors, we entered a purgatory room, where other players waited around. Then, my party left. I tried to follow them, but apparently my Palace of the Dead gear was not leveled enough for me to continue.

"Hey," I asked a nearby elf in fancy gear. "Why does it say my armour isn't strong enough? I just went through the dungeon like everyone else."

"I think you still have to gain item ups from the first 10 levels," he explained, "to access more levels."

"So I have to run through again?" I clarified.

All right, I said, to nobody in particular, at 1:30 in the morning. OK. Dungeon homework. 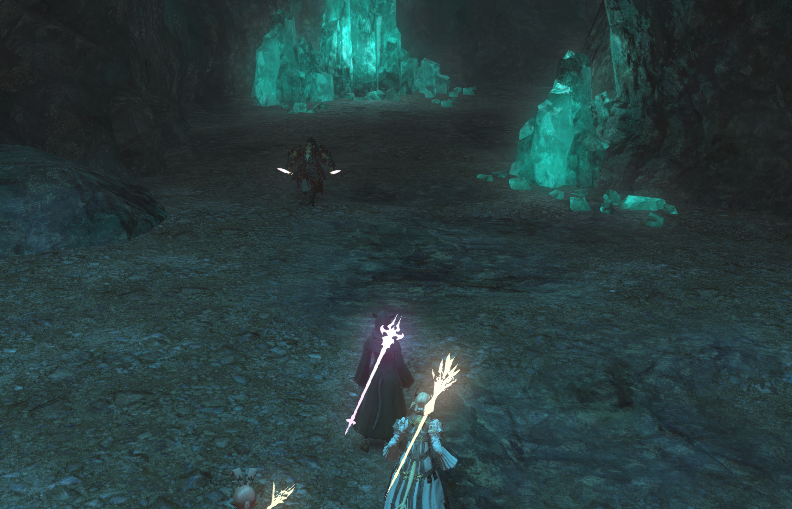 What made the second go-through worthwhile was trying out the various new "pomander" items. One transformed me into a succubus. Another metamorphosed enemies into cute little creatures, which was particularly fulfilling around floor 30, when we were aggroed by a half dozen "Nightmare Gourmands."

As we leveled, the floors steadily added more frequent and difficult monsters. Area-of-effect attacks and enfeebling spells become more common among mobs, although the bosses remained relatively easy. Higher floors were decorated with shining crystals or fiery igneous rock, but none paralleled even the first FFXIV dungeon, Sastasha, in intrigue or beauty (to be fair, Sastasha's neon, glowing plants are just amazing). 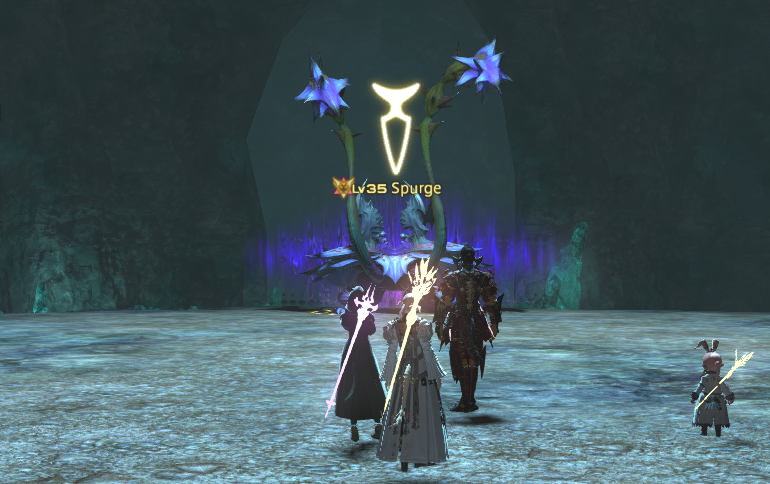 The whole Palace felt very classic in its approach to dungeon-crawling, a trait that some players have been praising as they level up new classes. I see its merits there: The Palace of the Dead is the ideal scenario for figuring out the ins and outs of a skillset. And, for more experienced players, I'm sure the Palace of the Dead is background to a lively chat conversation between friends. But truly, it is grinding:

The mobs' battle mechanics aren't particularly interesting for the dungeon's first 20 levels. The randomised maps don't affect strategy much, and actually made me wonder whether the "roguelike" draw was simply an excuse to skimp on level design costs. I advanced with unprecedented felicity, despite the fact that the dungeon didn't require my full attention until the 30th floor (in no time, though, my level 42 black mage gained two levels). As someone who has seen what the game (and its predecessor) has to offer in terms of epic boss fights, beautiful zones and curious monsters, I was not impressed. Unlike FFXIV's other dungeons, The Palace of the Dead felt unengaging.

Soon, new floors will be added. The experience, in all likelihood will be improved upon. Final Fantasy XIV is, we have seen, fantastic at improving itself (The game's initial release was a complete flop. Subsequently, it was redesigned into one of the best MMORPGs of all time).

In my mind, FFXIV's new dungeon could have been the solution to a certain flattening and streamlining of the Final Fantasy MMORPG franchise. FFXIV has, to me, at points felt like a railroad on which I am seamlessly ushered to experience points and benchmarks and quests. To many players, it feels like a better-designed game than FFXI. I wouldn't disagree. It's an amazing MMORPG. Perhaps my issue is that I like feeling frustrated — but only for the right reasons.