The creators of Open IV, one of the most popular modding tools for GTA V, are shutting their services down. They claim they have received a cease and desist from Take-Two Interactive after nearly 10 years of operation. The news comes as a shock to the PC Grand Theft Auto community, who use OpenIV to add thousands of mods into GTA V.

OpenIV, a super popular modding tool used by tons of GTA V fans, had a multitude of uses. Some players used OpenIV to make machinima videos that aren’t possible using the in-game video editor. Others used OpenIV to add new vehicles, weapons and features to GTA V. And for those who hunt for mysteries and secrets in GTA V, OpenIV allows them to dig deeper and poke around in the game in ways Rockstar never intended.

According to a post on the official OpenIV website, the alleged cease and desist came on June 5th 2017. The supposed problem, OpenIV’s creators say, is that the program allows “third parties to defeat security features of its software and modify that software in violation Take-Two’s rights.” After discussing their options, the team behind the tool says they decided it was not worth their time to fight back.

“Yes, we can go to court and yet again prove that modding is fair use and our actions are legal,” creator GooD-NTS wrote. “Yes, we could. But we decided not to. Going to court will take at least few months of our time and huge amount of efforts, and, at best, we’ll get absolutely nothing. Spending time just to restore status quo is really unproductive, and all the money in the world can’t compensate the loss of time. So, we decided to agree with their claims and we’re stopping distribution of OpenIV.”

Accordingly, when players now try to use OpenIV, they see this message: 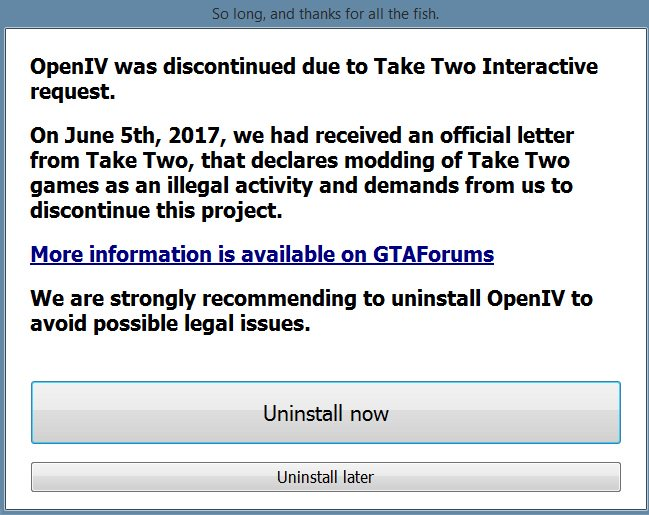 The tool is no longer available for download, and will no longer receive updates. UPDATE 16/6: Here’s Rockstar Games, confirming the situation:

Take-Two’s actions were not specifically targeting single player mods. Unfortunately OpenIV enables recent malicious mods that allow harassment of players and interfere with the GTA Online experience for everybody. We are working to figure out how we can continue to support the creative community without negatively impacting our players.

We reached out to Rockstar, Take-Two, and the OpenIV developers, but did not hear back in time for publication.

News of the shutdown spread fast, with fans and modders alike reacting with anger, confusion, and sadness. “This is such a huge loss to noncommercial homebrew gaming,” Jordan Miller, a modder known for making funny GTA V videos, told Kotaku. “This program … is used by anyone who swaps out 3D models in the game,” Miller said. “It’s the only way to ‘reverse engineer’ the game that exists; nobody else has made something comparable because it’s so good at what it does and the team behind it is so industrious.

“People will still be able to use single player mods like trainers, but nearly everything I have done with those mods has been in conjunction with being able to poke around the game directories with OpenIV,” Miller said.

Many angry GTA fans are even swearing to never buy another game from Take-Two again. 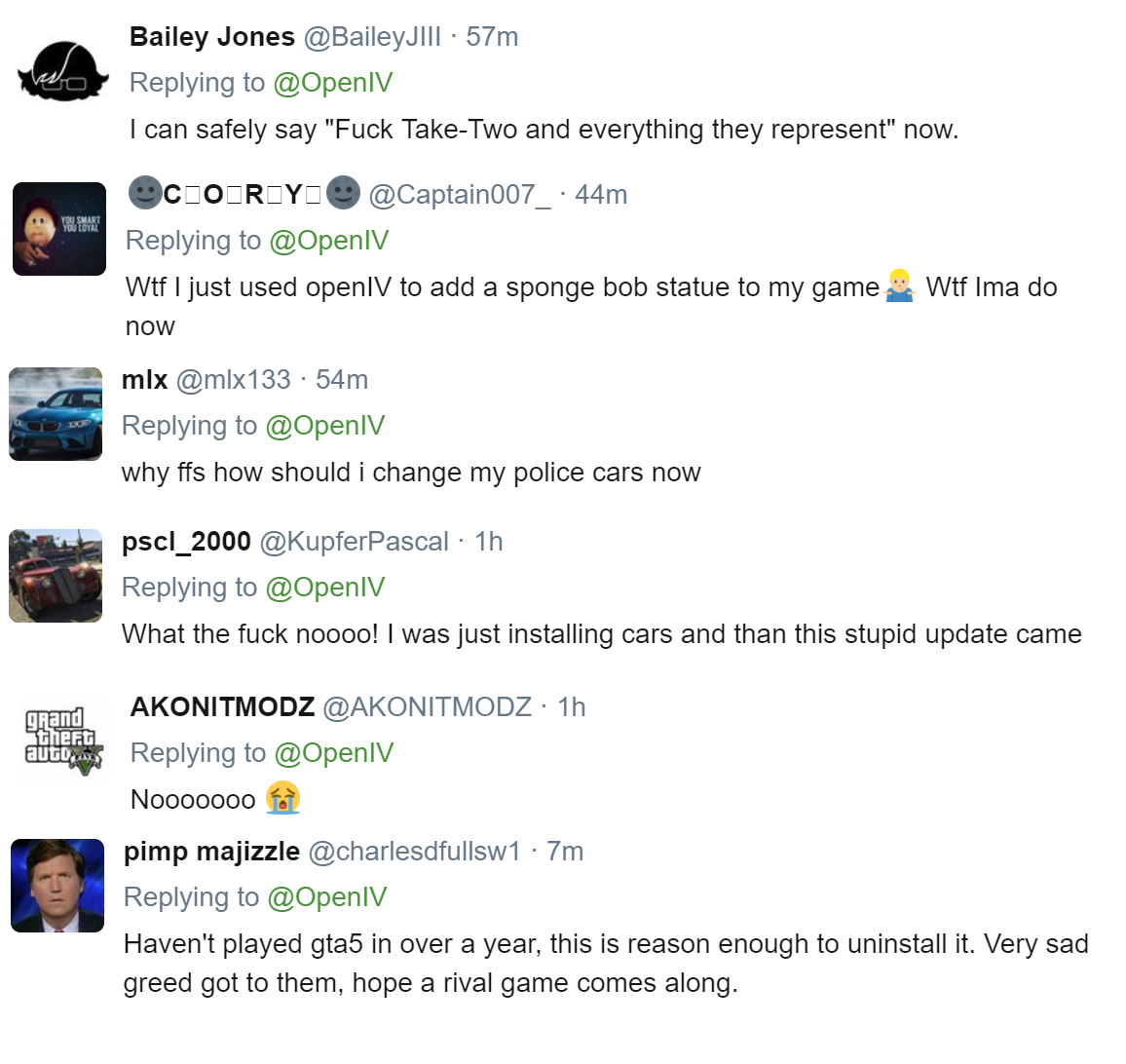 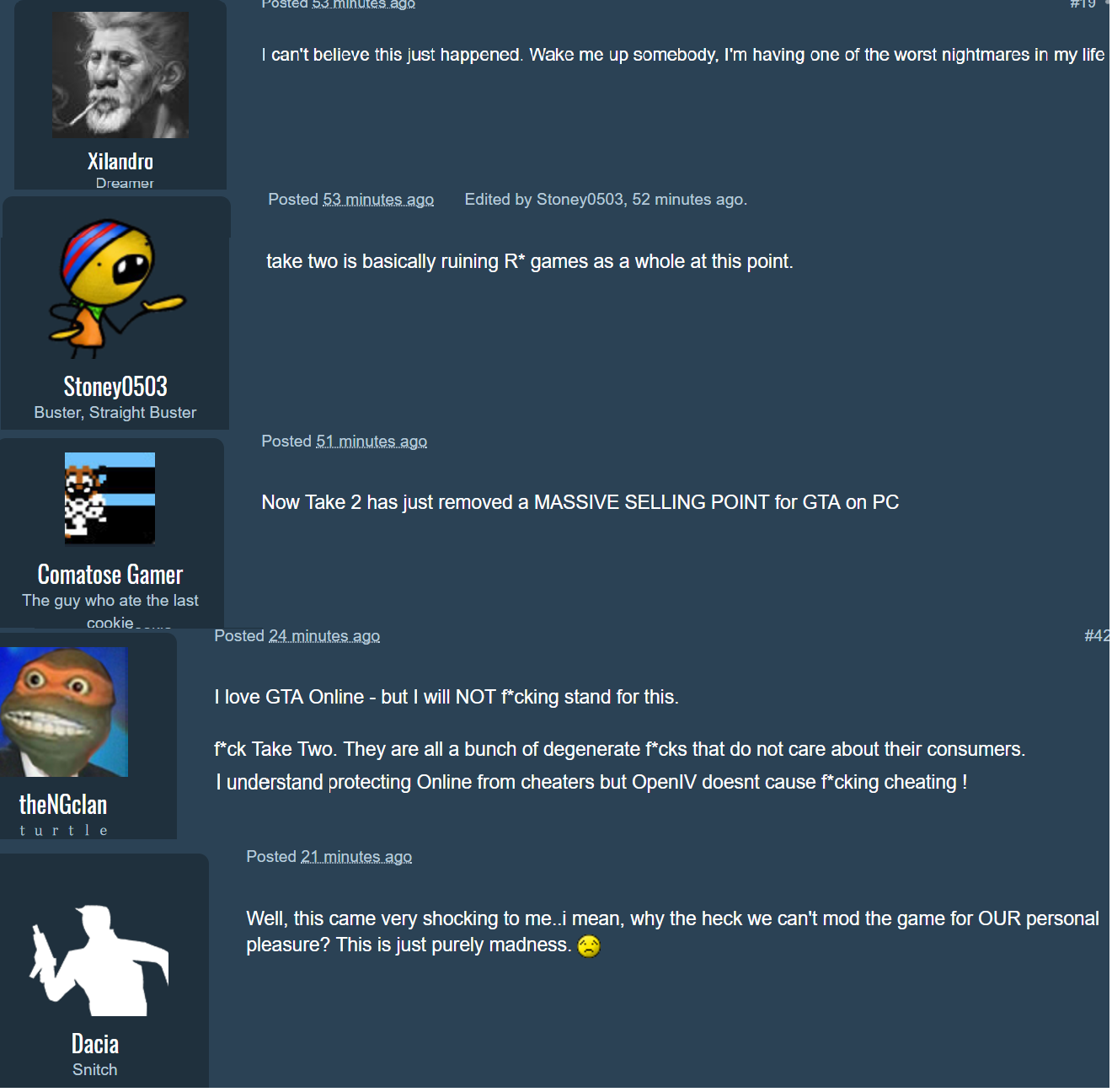 This is just a small sample of the thousands of responses happening right now. The creator of OpenIV himself tweeted this shortly after news of the shutdown came out:

Almost ten years of my life were dedicated to @OpenIV and now this time is over. #openiv #modding

In the past, Rockstar has actually been supportive of GTA modders. As pointed out by GTA News Online, you can find blog posts on Rockstar’s official website sharing video links to popular GTA mods that use OpenIV.

And in an May 2015 Q&A on Rockstar’s website, they said they “have always appreciated the creative efforts of the PC modding community and we still fondly remember the awesome zombie invasion mod and original GTA map mod for GTAIV PC among many other classics.”