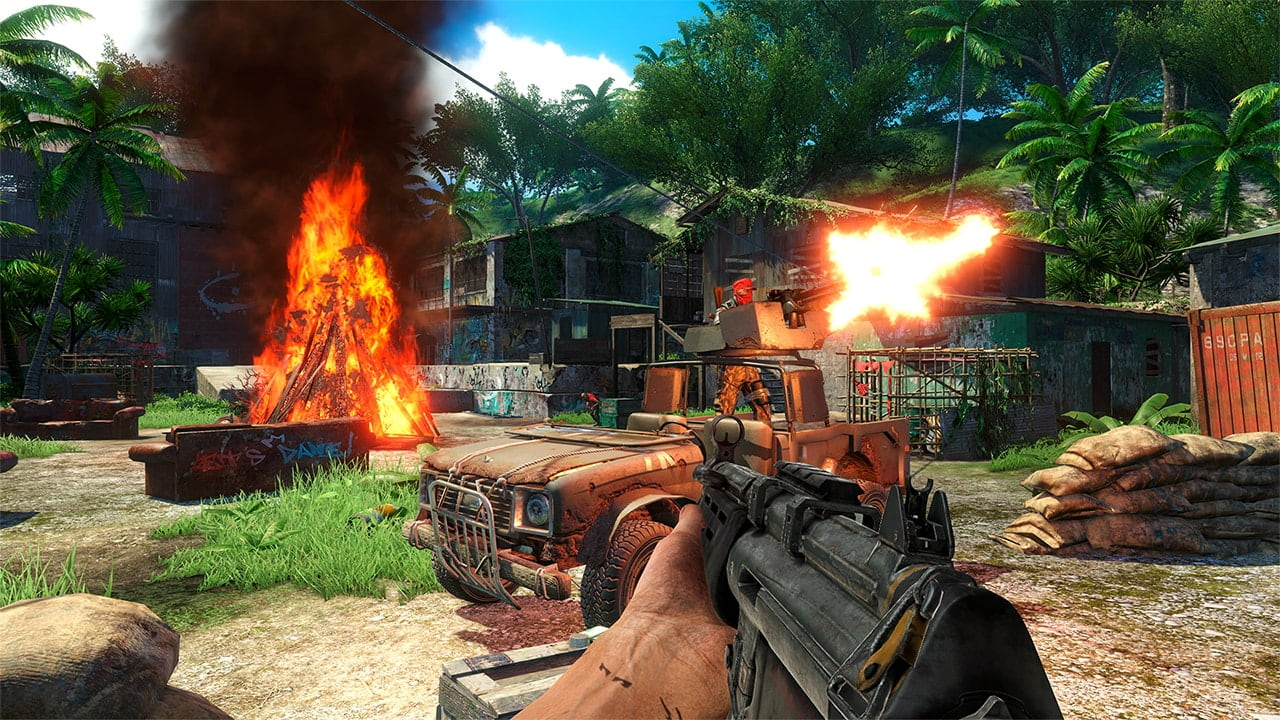 Far Cry 3 Classic Edition came out yesterday for people who bought Far Cry 5's season pass and it's turned out to be the tropical island escape I didn't know I needed. After several weeks with the recent Far Cry 5 I thought I was done hunting wild boars and accidentally blowing myself up, but it's been refreshing to revisit the bright and verdant Rook Islands.

Narrative beats and clumsy post-colonial politics aside, Far Cry 3 is better than I remember it. The 2013 game, may be a more directed experience then the series' most recent instalment.

You do have less choice about the order of the missions you undertake. But in-between the story missions and fetch quests I am really appreciating the game's sumptuous visuals and vibrant colours. The tropical climate is a nice switch from Montana's dusty backroads and evergreen forests. The change of scenery alone makes familiar activities like collecting animal hides and laying siege to enemy outposts feel revitalised. Your player-character, Jason Brody, is still a whiny brat, but I had no idea how much I'd missed the small animations for when he's bandaging himself up or skinning a buffalo that help flesh out the moment-to-moment action and remind me how brutal life in a Far Cry game can be.

I've encountered one big negative, though,that's been taking me out of the experience: bad analogue stick control. Unless you swiftly flick the sticks past the 40-50% range in any direction, the view on screen barely moves.

It's not that noticeable until the first time you try to track an enemy on the move, at which point it feels like steering one of the island's beat-up jalopies. I constantly find myself either under-aiming because of a lack of sensitivity or overcompensating and unloading shots inches in front of my target.

While I'm playing on PS4, other players have noticed a similar issue on Xbox as well, complaining about the size of the sticks' dead zones, a problem Ubisoft Support is apparently aware of and looking into.

While some people say it makes the current port of Far Cry 3 unplayable (someone who claims to have gone back and tried to the original Xbox 360 version of the game says they noticed a difference) it hasn't made me want to put the game down. What it has done is distract me from the rest of the game's beauty, which is even more stunning running on current-gen consoles.

One second I'm marvelling at an ocean view while seagulls fly overhead while the next I'm struggling to take down a boar from 18.29m out, like trying to take in the view while flies nip at your heels. It's not a reason to regret this virtual vacation but it's still something you'll complain to all your friends about when you get back home.