Penny’s illustrious game development career began last week, though she’s been playing games since she was a toddler. She was intrigued by the progress of an ongoing project by independent game developer Lance McDonald, who is her dad. “Can I make a game too one day?” she asked him.

“One day” quickly turned into “today”. A nearby desk had a Windows 98 PC with Quick Beginner’s All Purpose Symbolic Instruction Code (QBASIC) on it, and Lance gave Penny a book to help her make sense of it all. Before long, she was working on her first game as a means of trying out some of the lessons she learned from the book.

Her game, Answer The Question, supplies players with an infinite cascade of maths questions, which they receive points for answering correctly.

“I tried to make an action game, but I wasn’t ready, so I made a different game,” Penny told Kotaku (as relayed by her father in an email).

After a few days of work, Penny completed the game and asked Lance if he could help her publish her game on Steam. “I thought that, if my family can have this game, why not other people?” said Penny.

A few years ago, Steam’s submission process might not have allowed for this sort of thing, but these days, Steam is stocked wall-to-digital-wall with far more slapdash stuff than a starry-eyed kid’s first game. 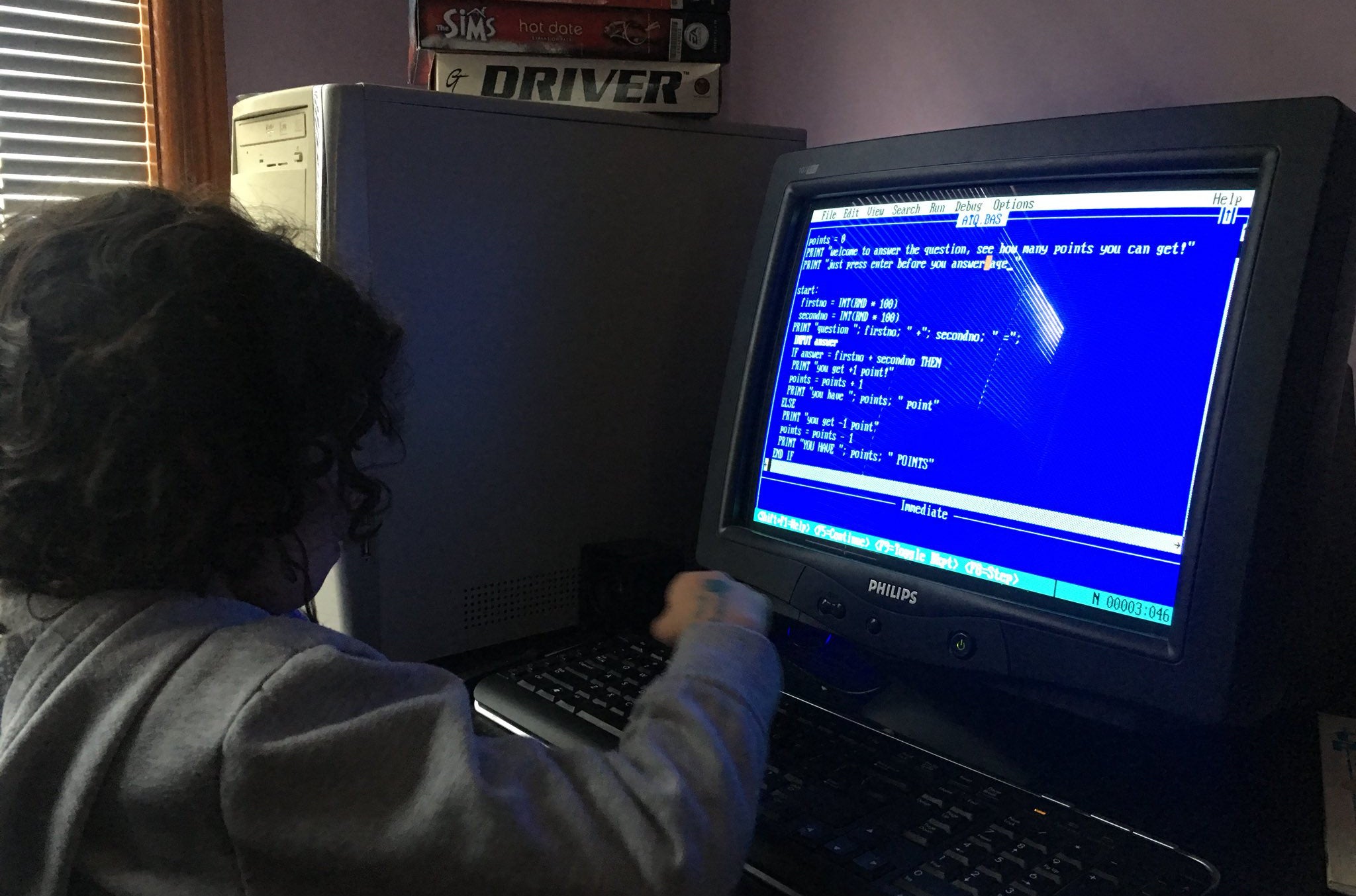 Lance explained that he has a toolchain in place for porting Windows 98 QBASIC games to more modern systems and adding modern features such as Steam achievements, so prepping the game for its time in the spotlight was easy. “She also uses that computer to play The Sims a lot, so she’s comfortable with it,” Lance said.

The father-daughter team briefly hit a stumbling block, however. After an initial submission, Steam rejected Answer The Question. This was not an indictment of the game’s quality or lack of open-world survival mechanics that require players to hoard freshly-slain addition problems, but rather the game’s Steam page, which needed a better logo.

“Valve asked if we redesign the logo to please say ‘Answer The Question’ in full, for cases where the logo is present without context,” said Lance. “Penny came home from school the next day and drew a new logo, which they approved within 24 hours.”

As of now, Answer The Question is up on Steam and has 14 positive reviews. Most of the reviewers do seem to be aware that the game was made by a seven-year-old, but hopefully, that positive encouragement will continue.

“It’s fun to laugh at the reasons we do or don’t like games, and the arbitrary things we use to decide that one game is more valid than another,” said Lance.

“Penny’s game is a fun paradox in that it’s the complete opposite of an asset flip, being wholly hard-coded and running entirely on the CPU, but people will still probably find a way to dismiss it as ‘not a real game’ based on some silly technical reason.”

Penny plans to make more games, with the eventual goal to climb her personal Everest: Developing an action game.

“Yes, I do want to make games, and until I learn how to make an action game, I am going to make a game where you can think about the game in your head while you type what you want to do,” she said.

Lance, ever the dutiful dad, translated: “Penny means to say here that she wants to make a text-based adventure where the player needs to use their imagination in lieu of graphics.”