Will somebody please put Pro Evolution Soccer out of its misery.

I started reviewing these two games together all the way back in 2012 because I felt that this rivalry, the last remaining true contest in all of sports gaming, deserved its own unique look at how each title shaped up. It was also because most folks who are into football would only ever be buying one of these games, and so telling them which of the two was better seemed like a good and practical idea.

It was also born from a desire to get away from the ages-old sports game reviewer’s obsession with bullet points and incremental updates, which are too often the focus of coverage and can distract people from a game’s more fundamental strengths or failures.

I thought that putting the games up against each other, rather than their list of features from the previous year, might be more useful.

Yet six years in, I feel like this double-review is in danger of settling into just the kind of repetitive drone it was designed to counter. Now, more than ever, each series’ pros and cons are so established, so settled into routine that it’s almost a waste of everyone’s time to dredge them up once again. 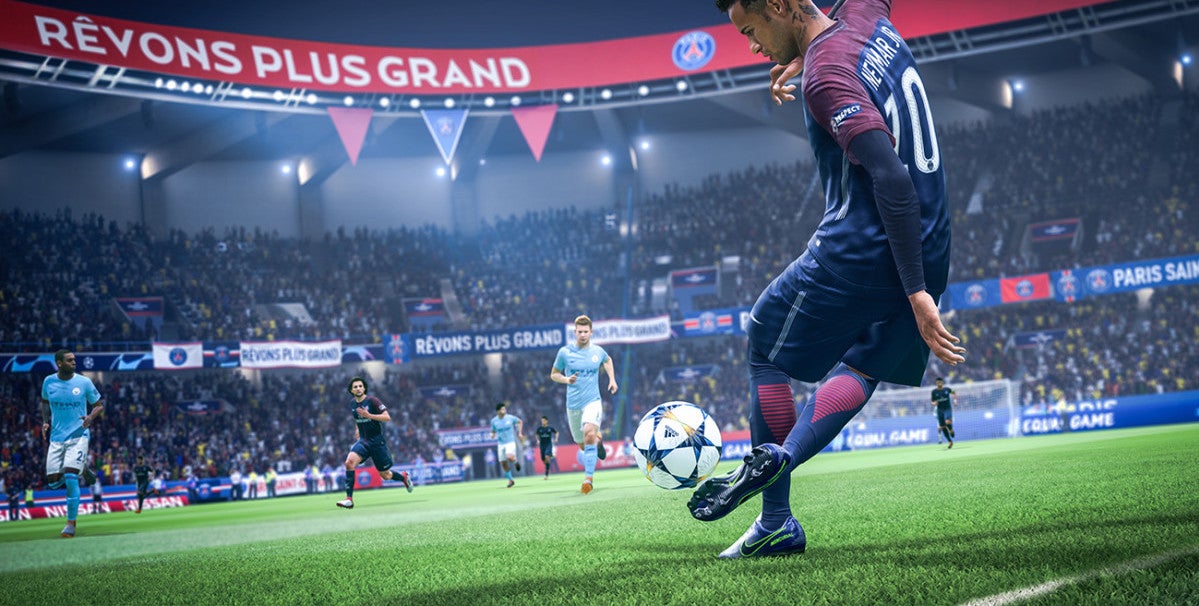 98% of FIFA players are going to rush straight into Ultimate Team and barely see the rest of an incredibly generous game, and 100% of Pro Evo fanatics are going to spend the next 11 months telling detractors “oh you can just mod in the official kits”.

As true as those generalisations are, though, this year both games have gone to the extremes of their respective margins. FIFA is glitzier than ever, particularly given the Hollywood treatment it’s laid out for the Champions League, while by comparison PES feels emptier than ever, that loss leaving a gaping hole that no amount of fake team names and minor league licenses can patch up.

Konami's Friendship With The Champions League Has Ended

One of the few bright spots in an increasingly bleak existence for Konami's Pro Evolution Soccer series has been the fact that back in 2008 it signed a 10-year deal with the massively-popular UEFA Champion's League. That deal is now over.

And so many people will already know which of the two games they’re going to opt for, and couldn’t care less what I’ve got to say on the subject. It won’t matter if PES has the Scottish Premiership, or if FIFA now lets you play novelty exhibition games with bonkers schoolyard rules.

Just in case you’re still on the fence, though, or even if you’re just looking for a tweet-sized verdict near the top of this post in the interests of rubber-necking, here you go: in 2018, FIFA has delivered what could be a knockout blow. 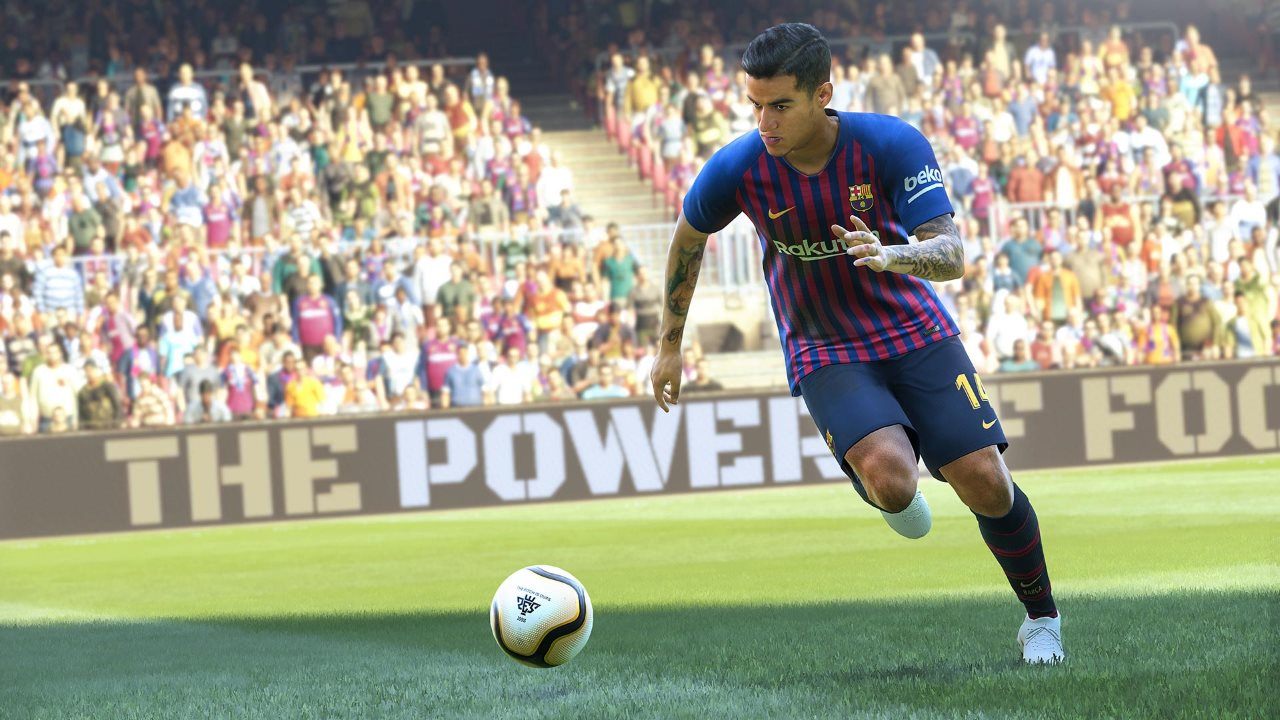 For the first time since I started these comparison reviews, one game is so clearly superior to the other that I’d recommend it almost without hesitation to any football fan, regardless of which series they normally prefer.

A combination of more physical play and the excellence of its singleplayer story mode makes FIFA 19 one of the best football games of the last decade, right up there with the groundbreaking FIFA 09 and PES’ Fox Engine debut back in 2013.

Why? Sticking to the main, important points, let’s start on the field. The biggest improvement FIFA boasts this year is that everything feels more immediate, more intimate.

Close control is closer and shielding more effective, with the result that the game is now so much more than just bulldozing runs and spammed throughballs. Defending benefits from this too, with the dance between simply pressing and lunging in for a tackle now balanced almost perfectly.

This sounds minor, but it absolutely transforms the game, slowing everything down and bringing FIFA far closer to the kind of measured experience PES has long been known for.

Sure, old fashioned FIFA tactics can still be used, but a delicate, methodical approach to goal is now more possible than ever for EA’s series, and the ability to switch between the two styles whenever you want (or need) is a welcome one.

Not that these advances can offset FIFA’s long-standing deficiencies in other areas. Like they have since the beginning of time, the rubbery animation of players still sucks, and the ball moves far too slowly when being passed around. FIFA also struggles at set pieces, with free kicks and corners particular shortfalls.

But overall FIFA’s performance on the field is a massive improvement over where this series was even a year ago.

In comparison, PES 2019 is fine. It’s still a great game of football in a vacuum, but there’s so little innovation to take note of this year, even by sports gaming standards, that you could almost just consult last year’s review and update the rosters.

Its ball movement is still more realistic than its competitor, and the pace of the game is a bit more sedate than PES 2018, but this year FIFA is much closer to PES in terms of playing like an actual game of football than it has been in ages, so what was once a big distinguishing feature between the two games is no more.

Without that clear advantage on the field, we’re left to take more notice of features off it, and PES is an exhausted series. There are no major new modes, no bold ideas to try and outflank EA’s monetary superiority.

To suffer through its menu system and UI is to be reminded of the worst of Japanese game development trends from the mid-00s, and Peter Drury’s commentary is enough to make you play the entire game on mute.

The loss of the Champions League licence, long PES’ one marketing advantage over EA, is a massive one because, in footballing terms, it’s a six-pointer. It’s bad enough for Konami that the licence is missing from their own game, but to see the pomp and bombast it’s been given as the new centrepiece of FIFA—complete with its own visuals and commentary team—only makes matters worse (or better, if you’re EA Sports).

In an attempt to make up for this, PES has added a bunch of new licenses from minor European and South American leagues. Great news for fans of obscure competitions that are home to 117 Chelsea loanees, but when the EPL, La Liga and Bundesliga are all missing, as are most of their teams, that’s a big blow for all but the most obsessive tinkerers.

PES also comes up short in other areas against FIFA, from its tournaments to online modes to its dismal menu system to the fact EA has continued to include a robust womens mode while Konami remains a mens only affair.

But there’s one difference between the two games that truly sets them apart, more than any ball physics or managerial controls, and that’s The Journey.

I remember wondering in 2014 why there were no great sporting RPGs. Now, only four years later, we have one. This third chapter of The Journey is almost everything I’ve wanted from a singleplayer sports experience, giving me just enough game time that I feel truly involved and responsible for what’s going on, with just enough cutscenes and directorial intervention (starting certain games from the bench, or under challenging circumstances) to remind me I’m playing through an actual story and not just another bland career mode.

Having expanded its cast of playable characters to three last year, FIFA 19 brings each storyline to a conclusion as Alex adjusts to life as a superstar in Madrid, Danny faces some personal challenges as he rises to the top of the Premier League and Kim tries to lift the Womens World Cup with the US national team.

It’s a singleplayer experience full of important choices and entertaining consequences, corny but endearing performances, with characters whose greatest appeal comes from the fact they’re so normal.

There’s none of NBA 2K’s corporate slime or Longshot’s sanctimonious cliche here; The Journey’s triumvirate are young, dumb, vulnerable kids who make mistakes, crack jokes and are just out there trying their best, which makes them surprisingly likeable.

With the ability to affect the development of the story (and even its ultimate outcome) through both dialogue decisions and gameplay, there are even times when The Journey starts to feel like a footballing Mass Effect (if you’re not concerned with spoilers, PCGamesN have a roundup of all the possible variables to give you an idea of what’s in store).

You’re given control over all three characters for the duration of a European season, and have the freedom to play as each one for as long as you’d like, swapping between them whenever you fancy. You can even play as just one of them for the duration, though it’s wisest to follow a prompt telling you the best character to be playing at any given time, so that you can see the most of The Journey’s story.

With dozens of games to play across La Liga, Premier League, Champions League and Womens World Cup, the amount of playtime and cinematics built into this would make it a AAA sports title in its own right.

The fact it’s simply one game mode among many here is what, more than anything else, cements FIFA’s place at the top of this two-game pecking order.

The gulf between these two games is now so large that I almost feel bad for PES. Konami now find their series in a situation similar to that EA themselves faced when NBA Live re-entered the market a few years back, with almost zero reason to recommend their game over the more glamorous and popular competition.

At least with NBA 2K there’s some onerous microtransaction bullshit counting against the superior basketball game. Here, there’s none of that, with FIFA’s extra purchases quarantined in a game mode you never have to touch if you don’t want to, with all singleplayer upgrades and cosmetic items unlocked through gameplay.

It’s not that PES is a bad game. If your gran bought it for you for Christmas, or you never wanted to play online with mates who are all likely obsessed with FIFA’s Ultimate Team, or supported one of the handful of big teams like Liverpool or Barcelona that it has the licence for, you’d have a blast.

After all, it’s mostly the same game as last year’s PES, which took out 2017’s Kotaku review showdown.

But that was then, and this is now. And if you only get one football game in 2018, make it FIFA 19. While PES has stood still, FIFA has made the most of its licenses while at the same time improving its on-field product and singleplayer innovations, resulting in one of the most comprehensive and enjoyable sports games in years.