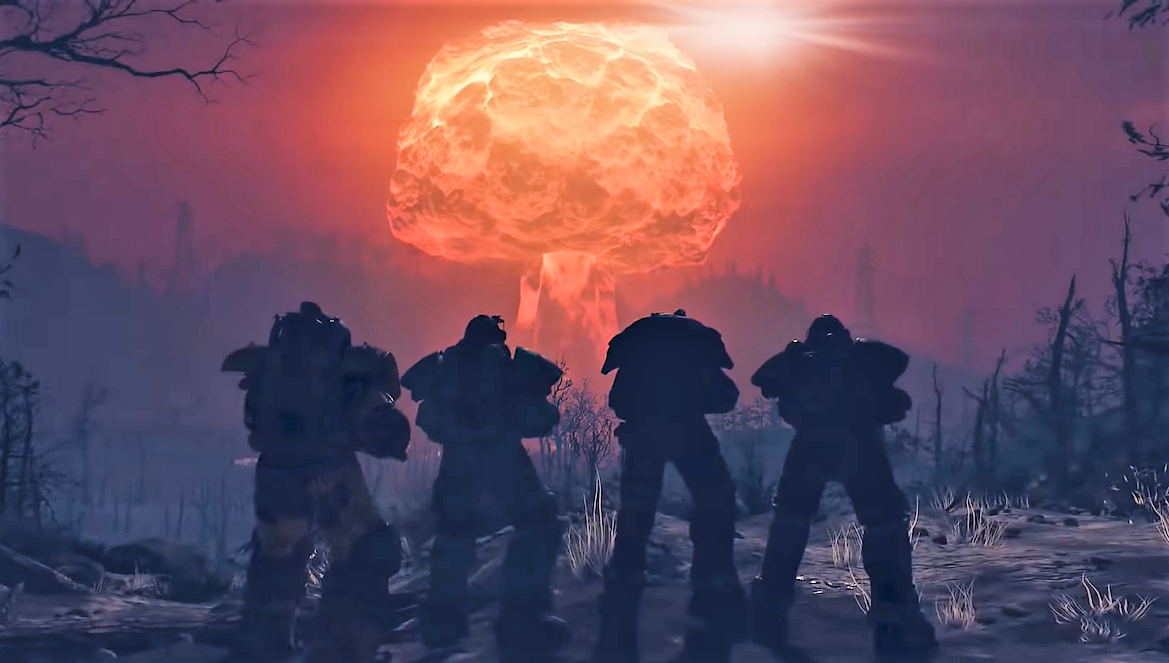 Even though Fallout 76 takes place in a world where the bombs have already dropped, the game is littered with silos full of more nukes for players to launch themselves. Finding the codes to do so is supposed to be complicated, but players have not only already launched nukes, they’ve found ways to streamline the process as well.


Firing nukes at various locations across Fallout 76’s map leads to limited time events where enemies in those areas become super strong and doll out rare loot. Players have been chasing down nuclear launch codes since the game’s beta, but even after collecting the right codes, they still need to decrypt them using other clues in the game before they can use them.

Earlier this week, players who had managed to crack the codes started releasing programs based on the cipher to do it automatically.

One of these programs is called NukaCrypt. Created by a person who goes by Waffle_cop on Reddit, it takes the partial nuclear codes players have collected and spits out the possible decrypted one. Nuclear codes in Fallout 76 use a keyword cipher, which means the letters are coded using an alphabet-based on a unique word that changes every week.

While the keyword is slowly revealed over the course of each week inside a surveillance room in the Enclave Bunker, tools like NukaCrypt only need a few letters to successfully brute-force the problem by bringing conventional code breaking methods to bear on Fallout 76’s unique setup. It’s also taken some of the magic out of the game’s nukes in the process. 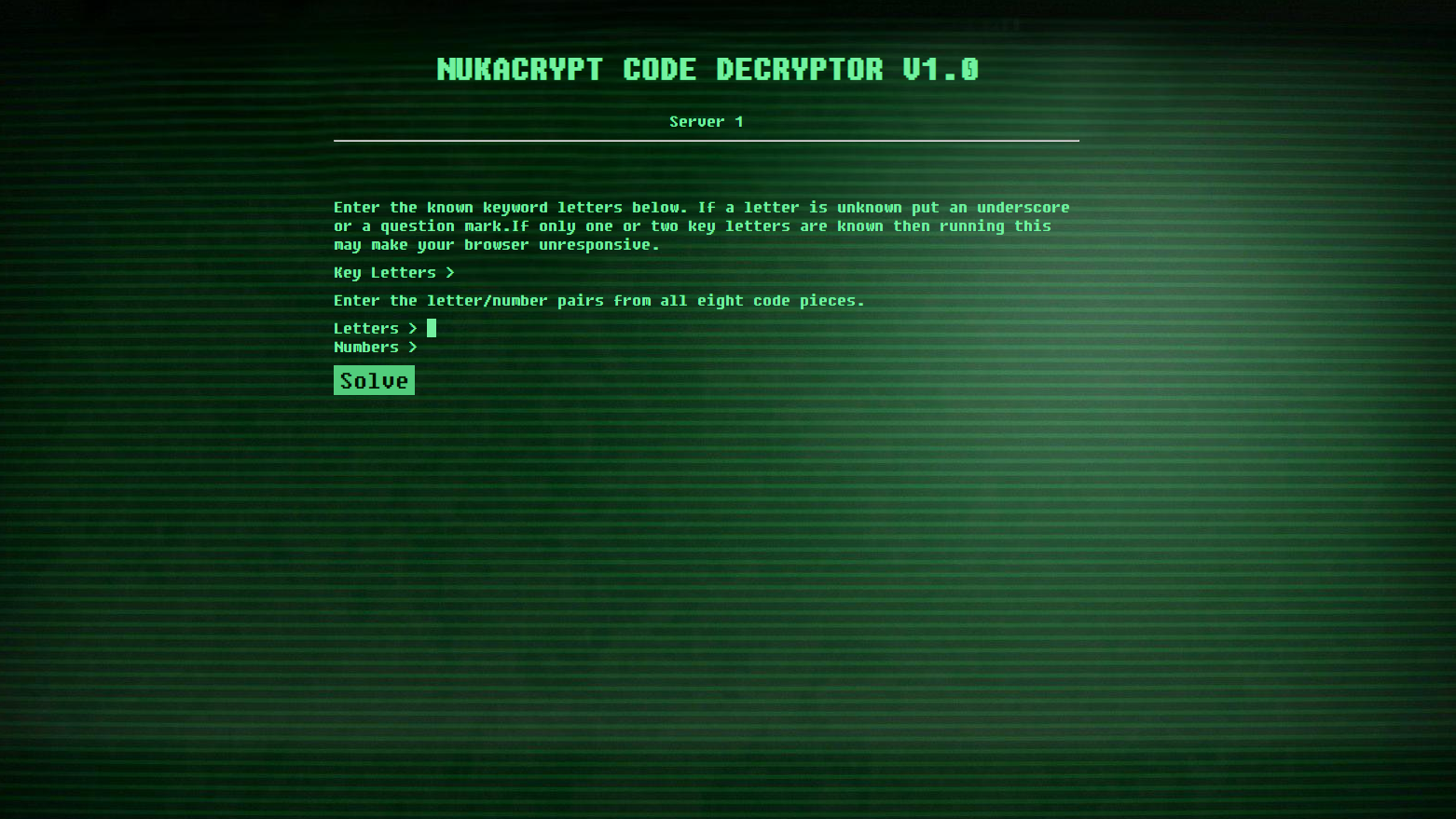 Collecting fragments of nuke codes can be an ordeal in itself, since they can only be found on the bodies of Feral Ghoul Officers that randomly appear throughout the map. Since there are three different missile silos in the game and each uses unique codes, you can end up needing to collect a lot of codes before getting a full set.

Accessing the silo terminals to input the codes also requires keycards that need to be collected separately from downed Enclave dropships. But with the bulk of the decryption out of the way, the process has become a lot more streamlined, so much so that some players are worried Fallout 76’s end game won’t be as long-lived as they’d hoped.

“Good work – you broke the game,” one commenter joking said in response to Waffle_cop sharing their work. While the code fragments still encourage players to work together on a single launch, the actual act of cracking them will likely be the easy part.

While people have launched nukes previously in the beta, a crew of people fired one at one of the game’s fissures yesterday, particularly hard areas that are already home to tough monsters called scorchers. YouTuber Nickaroo93, via The Verge, shared a video of the ensuing fight, which looks like something straight out of Reign of Fire.

As someone who continues to get their arse kicked by mole people, I can’t imagine trying to take on three high-level Scorchbeasts at once. In another video, Nickaroo93 showed how he and his friends used the NukaCrypt to drop the bombs on the very first day the game was out. 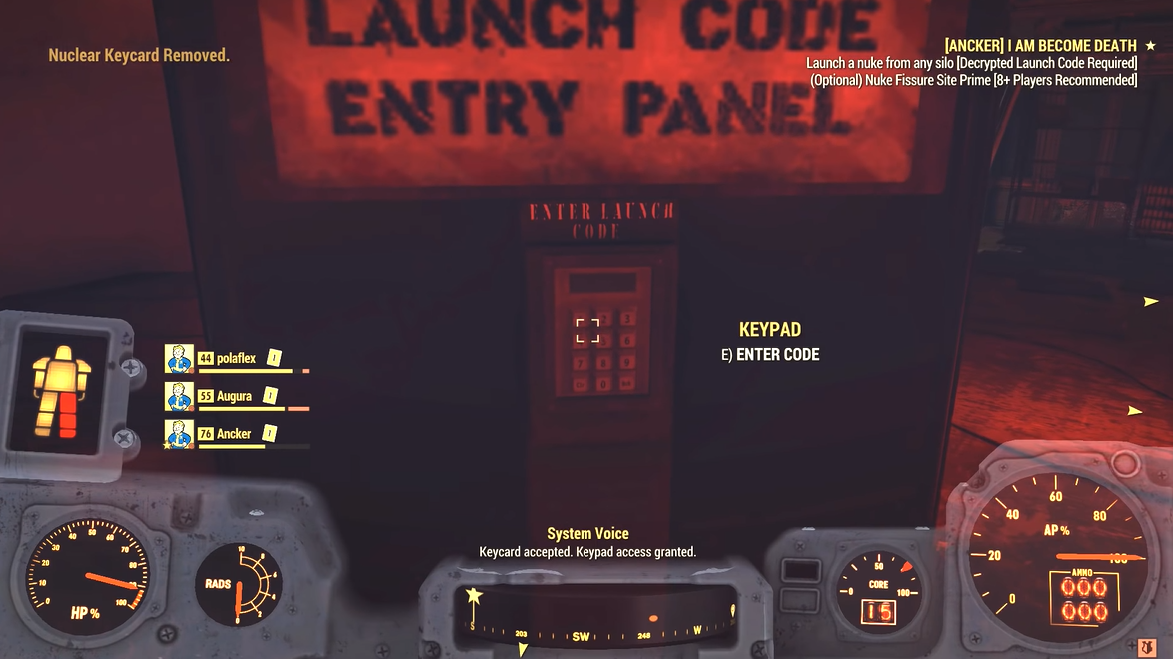 When Bethesda originally showed off the game’s nuke system, people were afraid it would be a way for players to target one another’s camps and lead to all sorts of trolling. As the publisher later clarified, nukes aren’t supposed to be player vs. player weapons as much as tools for facilitating MMO-like raids.

While it’s true that the any low level players caught in the nuked area will quickly get toasted unless they have strong armour, these events are supposed to have a cooperative focus, with players from around the map banding together to take down mobs of hyper-powered enemies in exchange for better gear and resources.

Of course, just because some players have already started dropping bombs doesn’t mean it’ll become a nuclear free-for-all in the immediate future. Collecting launch code fragments and keycards is still an arduous and dangerous process, and getting access to the silos, which are themselves heavily defended, requires having completed the Enclave quest line.

It also remains to be seen whether Bethesda has plans to change out the keyword cipher method and introduce other puzzles for unlocking nukes in the future, or whether tools like NukaCrypt will be Fallout 76’s version of Destiny’s public event finders.

In either case, it should be good motivation for current players to always keep a hazmat suit on hand.