featurenintendo switchsmash ultimatesuper smash bros ultimateswitchtips
To sign up for our daily newsletter covering the latest news, features and reviews, head HERE. For a running feed of all our stories, follow us on Twitter HERE. Or you can bookmark the Kotaku Australia homepage to visit whenever you need a news fix.

Super Smash Bros. Ultimate has it all, and whether you’re a seasoned pro or a newbie coming in blind, “it all” is a lot. Every fighter from every prior Smash game is available, plus over 100 stages, a lot of wily items, a slew of quality-of-life updates and a somewhat perplexing collectables system called “Spirits.” Here’s how to get the most out of Smash Ultimate, which is, in my opinion, the best Smash game yet.

Unlock All The Fighters As Soon As You Can

Much of what makes Smash Ultimate so delightful and special is its enormous and sprawling roster of 76 fighters. Most of them are very, very fun to play. Smash Ultimate‘s breadth of fighters is its most obvious selling point and it’s worth experiencing as quickly as possible.

If you’re familiar with Smash, you’ll definitely enjoy long-anticipated inclusions like Ridley and King K. Rool. Or you might be happy to discover that, in this game, Shulk’s redesign makes him way easier to grasp. Newbies to Smash will also benefit from unlocking all the fighters quickly, so as to taste-test all their options before finding a couple go-tos.

When you first boot it up, Smash starts with 8 fighters. There are a couple of ways to unlock all the fighters. Every ten minutes throughout playing versus mode or Classic mode, a new challenger will appear. Once you end a match, you’ll have to defeat this new character in order to unlock them. Through this method, fighter unlocks happen organically and take a bit of time to complete.

There’s also a brute force method. As of writing these tips, it still works. But it’s finicky. First, you set each versus game to end on a one-second time limit. After the match, exit out of the game completely. When you reopen it, play another short versus match.

At that point, a challenger should approach. This method should make the unlocking process go by a little faster. Smash pro Gonzalo “Zero” Barrios runs through how do it all here:

If you lose against a challenger — as I did, many times — don’t sweat it. In the “Games & More” section, there’s a door called the “Challenger’s Approach.” It unlocks after you play for about an hour. Fighters you didn’t win over will be there, waiting to challenge you again.

Give Everyone A Shot

It’s possible and even likely that your main from Melee, Brawl, or even Smash 4 will feel completely different to play now. Maybe they fall faster, or their special got brutally nerfed. Smash Ultimate also introduces 11 new fighters, and a lot of them play in ways that are pretty unlike what we’ve seen before in other Smash games.

Because of that, you really can’t go into Smash Ultimate with firm ideas about who’s strong, who’s weak, who’s fun to play, and so on — unless we’re talking about a fighter whose playstyle is so distinct or annoying that you kind of get it already. I’m looking at you, Sonic!

Play through the whole roster. At the very least, an understanding of how all the characters basically work will give you an edge when you’re fighting against them.

Really Give Everyone A Shot 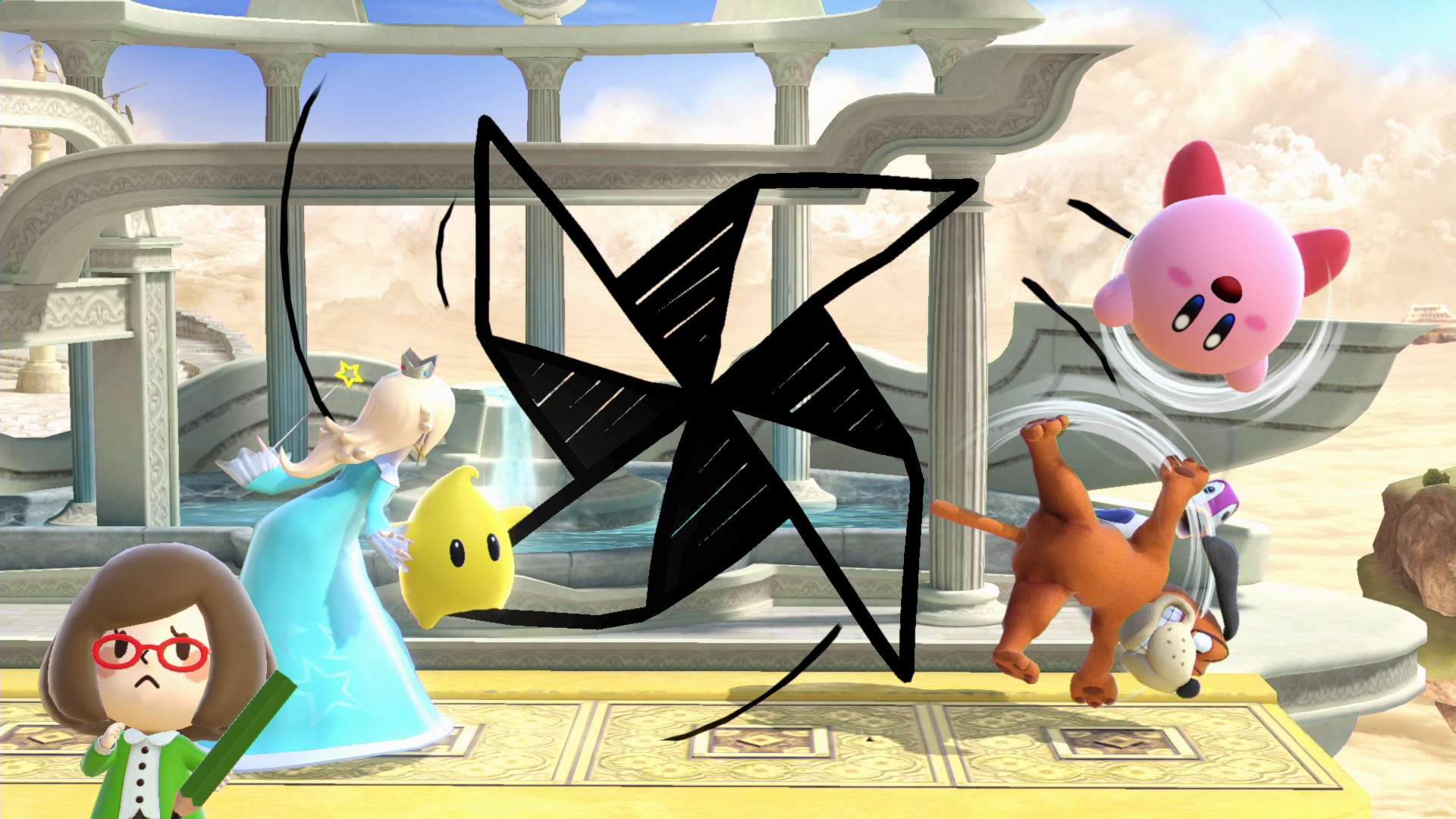 We get it — you like playing Kirby. Why don’t you pick another fighter for once? It’s good and fine to know what character you’re good with. Yet being so hard-set on winning, or appearing 100 per cent competent to people you’re trying to impress, means having less fun playing over a long period of time and people having less fun playing with you. There — I said it.

Try All The Items, Too

Not all items are bad. Not all items are good, either. It sucks to get KO’d three times by an assist trophy, an item that summons a character from a Nintendo or third-party game. It’s fun, though, to sic a swarm of bees on your opponent or discover what’s inside a Poké Ball.

Figure out what you like and what you don’t by turning all the items on — low frequency, not medium, which I’ve found to be too item-intense — and taking note of which items make your blood boil. For me, that was the evil mushroom that inverted my controls. Create a ruleset in which you have all the items you don’t like turned off. Which brings me to my next tip… 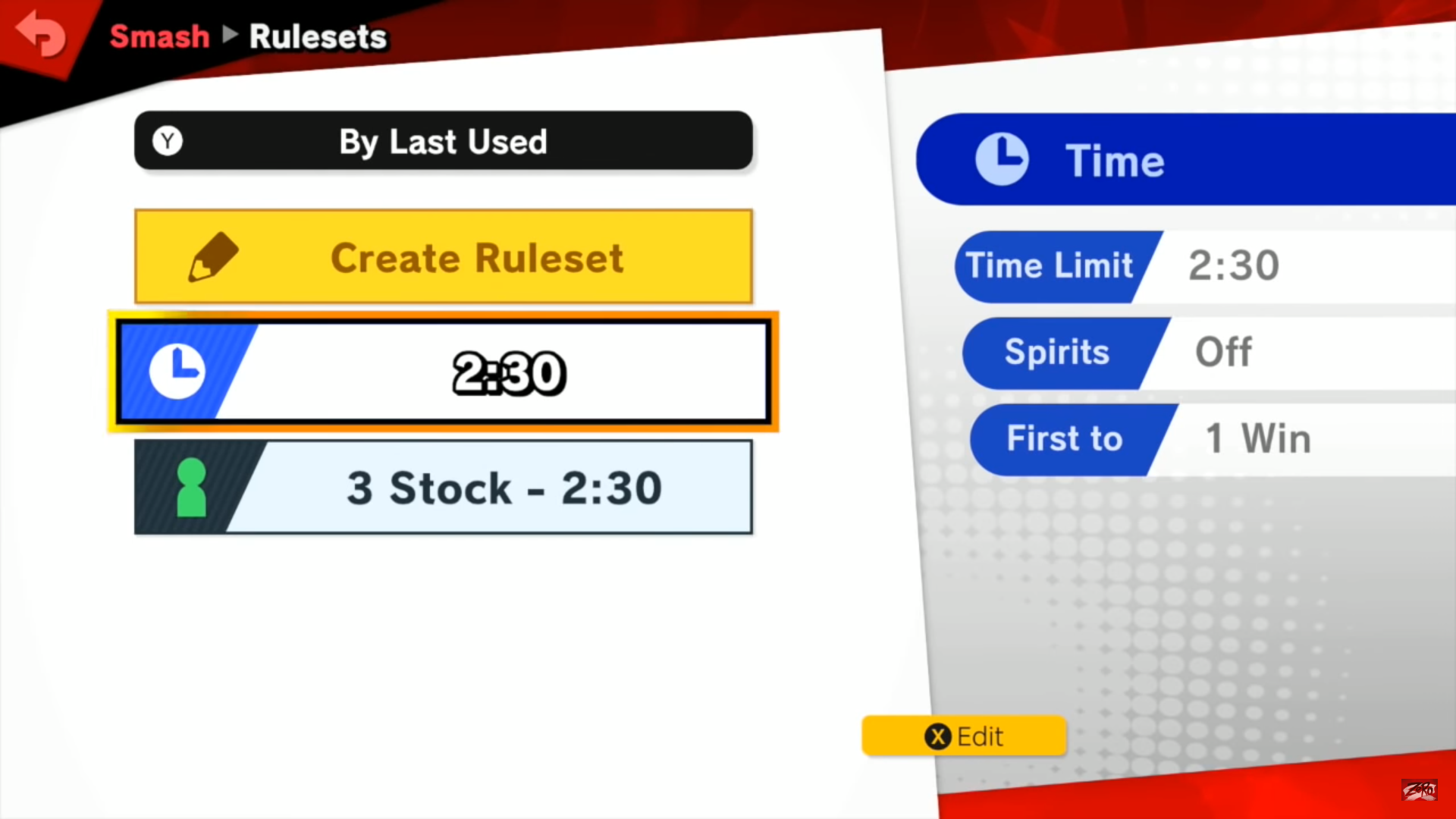 One of Smash Ultimate‘s greatest innovations beyond its predecessors is a relatively simple one. Before hopping into a character select screen, players can now choose what ruleset they play. You can create these rulesets yourself, and they can be anything: heavy item drop with a 10-minute time limit, no items and two-stock, light item drop with a Final Smash meter and stamina health — you name it.

You might have one go-to mode, like no items, two-stock and hazards off on stages. That’s great. Try branching out a little with slight variations, like like adding a Final Smash meter in one mode, or only letting the loser pick the stage.

It’s also a good idea to let your friends take the wheel on occasion and introduce some of their own preferences. That way, when they come over, you can still go by house rules, but be a good host at the same time by letting your friends select their preferred ruleset every now and then.

You can also gleefully ignore their preferences when they’re not around. At the very least, having a lot of rulesets an easy way to switch things up after playing for a couple of hours.

I can’t tell you how many people I’ve played Smash with who, after realising that their preferred controller wasn’t available, discovered a way better setup for themselves when they tried something new. Listen, I’m guilty of being a GameCube controller diehard.

But I’ve also discovered that I don’t actually mind playing Smash Ultimate with a single Joy-Con, which is good to know if I need to while away time with someone else in a coffee shop or on a plane. If the last controller scheme you really enjoyed was the Wiimote, and you’re taking great pains to replicate that experience on the Switch — maybe don’t and try something new.

It won’t hurt to remap your controls for a couple of games just to test the waters. You don’t have to just deal with Smash Ultimate‘s default settings. If you’re uncomfortable with anything, just change it. There are also certain setups that make different playstyles way easier to pull off.

For starters, I suggest going into your controller settings and turning off “stick jump,” which makes your fighter jump up when you move your control stick up. When that’s turned off, it’s way easier to land an up-tilt, a move that is like an up-smash but faster and less powerful. You can also try mapping tilts onto your Switch or GameCube Controller’s right control stick, instead of the smash attacks, which are there by default.

Smash Ultimate has a mode called Squad Strike. A little like Marvel vs. Capcom, it has two players each pick three or five fighters, order them secretly and then, in-game, switch off to the next fighter when they lose a stock. Squad Strike is a great way to learn match-ups and to force yourself to master a few characters at once. It’s becoming my new favourite mode.

What Even Is A Spirit

What indeed! The basics, according to Ultimate‘s in-game premise: Spirits are what’s left over after Nintendo and third-party characters lose their bodies. It’s the player’s job to save them. There are around 1400. There are also spirits for Smash fighters, which you can unlock in the game’s Adventure Mode, World of Light. A fighter can equip a team of Spirits to help them in battle. Spirits can call into any of the following categories:

Primary spirits buff fighters’ attacks and defence. They can be levelled up, too, the more you play with them. Support Spirits tend to grant more specific buffs like making players immune to sleeping or increasing defence when a fighter is badly injured.

Then, there are grey neutral spirits that aren’t involved in all that rock-paper-scissors madness. Grey spirits aren’t weak to anything or good against anything, either.

Being Strategic About Spirit Fights — Especially in World of Light

World of Light is kind of a trip. The player navigates a map scattered with spirit battles in an effort to free fighter spirits. The battles are mostly to free spirits that aren’t playable fighters in the game, though.

The fights are meant to reflect the vibe of the spirit you’re unlocking, so for example, you could be fighting just one Mario in an American flag skin and bunny ears to unlock the Rabbid Mario spirit. Other times, you’re fighting like, four small Villagers with a dozen soccer balls on the Pokemon map. Lots of these fights have conditions listed. Sometimes the floor is acid. Other times, the floor makes you go to sleep.

In World of Light, it can be hard to progress if you can’t win certain spirit battles. So it’s important to be strategic about these fights from the get-go to save yourself a lot of trouble. Fortunately, Smash Ultimate holds your hand a lot throughout this.

For example, if your equipped primary spirit is weak against your challenger’s spirit type, Smash will let you know. If you hit “Y” with your cursor over either the primary or support spirit slot, the game will recommend a spirit team for you. Sometimes, it’s not the ideal recommendation, so for fights that seem a little more challenging, it can be worthwhile to go through your spirit inventory to check whether you have a better solution than the game’s default recommendation.

I had the worst time trying to beat one fight involving heavy wings, a small stage, and two opponents. It took me 10 tries. It was only on that tenth attempt that I realised that I had a spirit that made heavy winds go away. The fight was easy after that. It’s possible and even likely that when you initiate a spirit fight, you have exactly the solution to whatever problem Smash Ultimate is throwing your way.

Listen To The Music

Smash Ultimate has over 800 songs available to listen to whenever you want in its music player. Take advantage of it!