We Translate The Yakuza Creators’ New Game As We Play It

Judge Eyes, the newest game set in Sega’s Yakuza universe, releases in English later this year under the title Judgment, and it’s going to include an optional English dub. If you are dying of impatience and would love to watch me live-translate a three-hour chunk of the game right the heck now, I have you covered.

After my first couple of hours with the game, I declared, on Twitter, that “If Yakuza is Final Fantasy, Judge Eyes is Persona.” I mean no offence to Yakuza or Final Fantasy, though yes, the positioning of the Persona name-drop in this hasty analogy implies a veneer of potently elevator-pitchable sophistication.

When I played the demo several months ago, I remarked on this very website that Judge Eyes feels almost exactly like a Japanese television drama in the best possible ways. Now that I’ve started drilling into the full game, I stand even more confidently behind that statement.

I adore the Yakuza games and the morally grey tough guys who inhabit them. Though if you told me I could only play Yakuza or Judge Eyes, well, I’d pick Judge Eyes.

It’s a game whose main character is a man in his forties who had to quit being a lawyer because the client he got acquitted got out of jail and immediately killed someone, who now works as a hard-drinking, punk-fashionable private investigator in the seediest district of Tokyo, where a third member of the Kansai yakuza has just been found dead with his eyes dug out of his skull.

Yes, Judge Eyes concerns a serial killer who is literally digging the eyes out of their victims’ skulls. Talk about on the nose!

Sega recently announced that Judge Eyes will be released in English as Judgment. Which, sure, that sounds like a decent enough, snappy enough title. And yes, I made fun of the title “Judge Eyes” before I knew the story concerned a serial killer who rips their victims’ eyes out. Now the title has grown on me, and I just gotta say, “Judgement” isn’t a title: it’s a word.

In this video, you’re going to see me rip through the prologue of the game and investigate my way through about half of the first chapter. We get to see a heaping handful of the systems in the game. We meet a lot of characters. I beat a couple guys to death with bicycles. I talk about how the first time I ever picked up a bicycle in Japan I literally thought, “You could kill somebody with this.”

I might tell almost too many stories about my own personal experiences in Shinjuku’s Kabukicho, which inspired this game’s setting, Kamurocho. I also employ my knowledge of Japanese apartment buildings to critique the interior decoration of every room I enter. I break down the details. It’s a lot of details.

This game sports enough authentic details to choke even the seen-it-all-est player’s eyeballs.

For example, look at this. When we go back to main character Yagami’s old law office, we can see the nameplate from his desk tucked away, upside-down, on top of a filing cabinet near the kitchen. 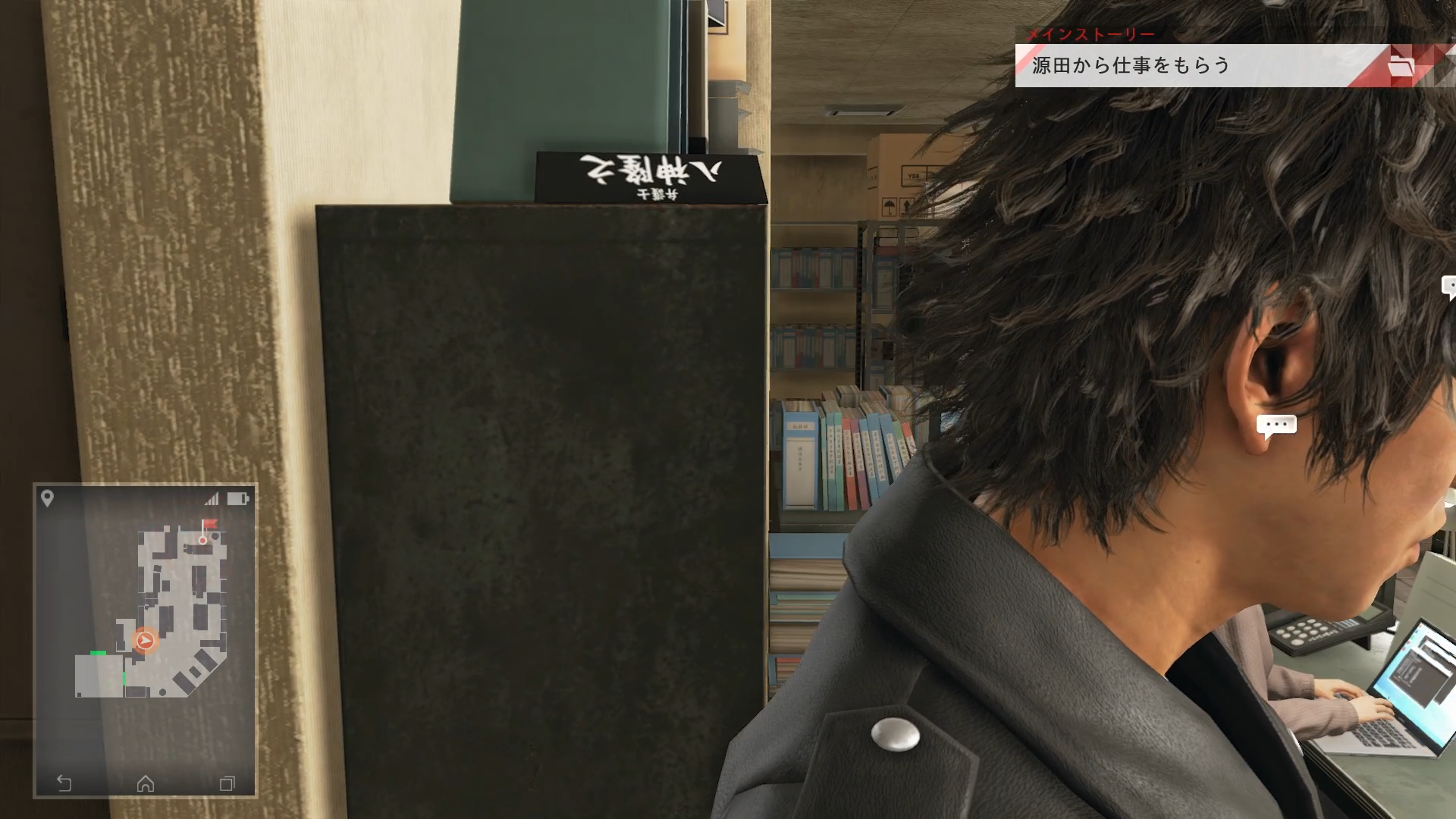 It’s been three whole years since Yagami left this office, its dirty sink, and its water-stained ceilings behind to pursue a life in search of only the most honest of truths. Yet, as we see in his conversation with his old boss and mentor, Genda, they still haven’t given up hope that their beautiful-haired star lawyer boy will come back to them someday.

This game is phenomenal. It strikes the perfect narrative balance between grown-up maturity and trashy television. It is what I have always wanted, and now I have it. Rather than keep it to myself, here I am, sharing it with you.