Dead Or Alive 6: The Kotaku Review

Despite several years of being best-known for its sexiness, Dead or Alive has always been a genuinely good fighting game franchise. With a focus on bringing new players into the fold and downplaying its more provocative features, Dead or Alive 6 serves as a strong reminder of the solid gameplay that has always remained at its core.

Since its inception in 1996, the series’ more innovative features—explosive danger zones and defensive and offensive holds—have taken a back seat to the “lifelike” breast physics and sexy costumes that series creator Tomonobu Itagaki included to make the original games stand out. Following Itagaki’s departure from Team Ninja in 2008, the developer attempted to make Dead or Alive 5 less sexy, reducing the breast size of its female characters, only to backpedal after receiving negative fan feedback of an early demo.

Dead or Alive 6, out today on Xbox One, PlayStation 4, and PC, tones down the sexualization of female characters in more subtle ways than the across-the-board breast reduction originally planned for the previous instalment. The breast physics are still in place, but the effect seems less prominent. Attire that would restrict movement in real life restricts movement in game. Starter costumes for characters are more modest overall, aside from exceptions like Christie’s ridiculous fetish outfit. 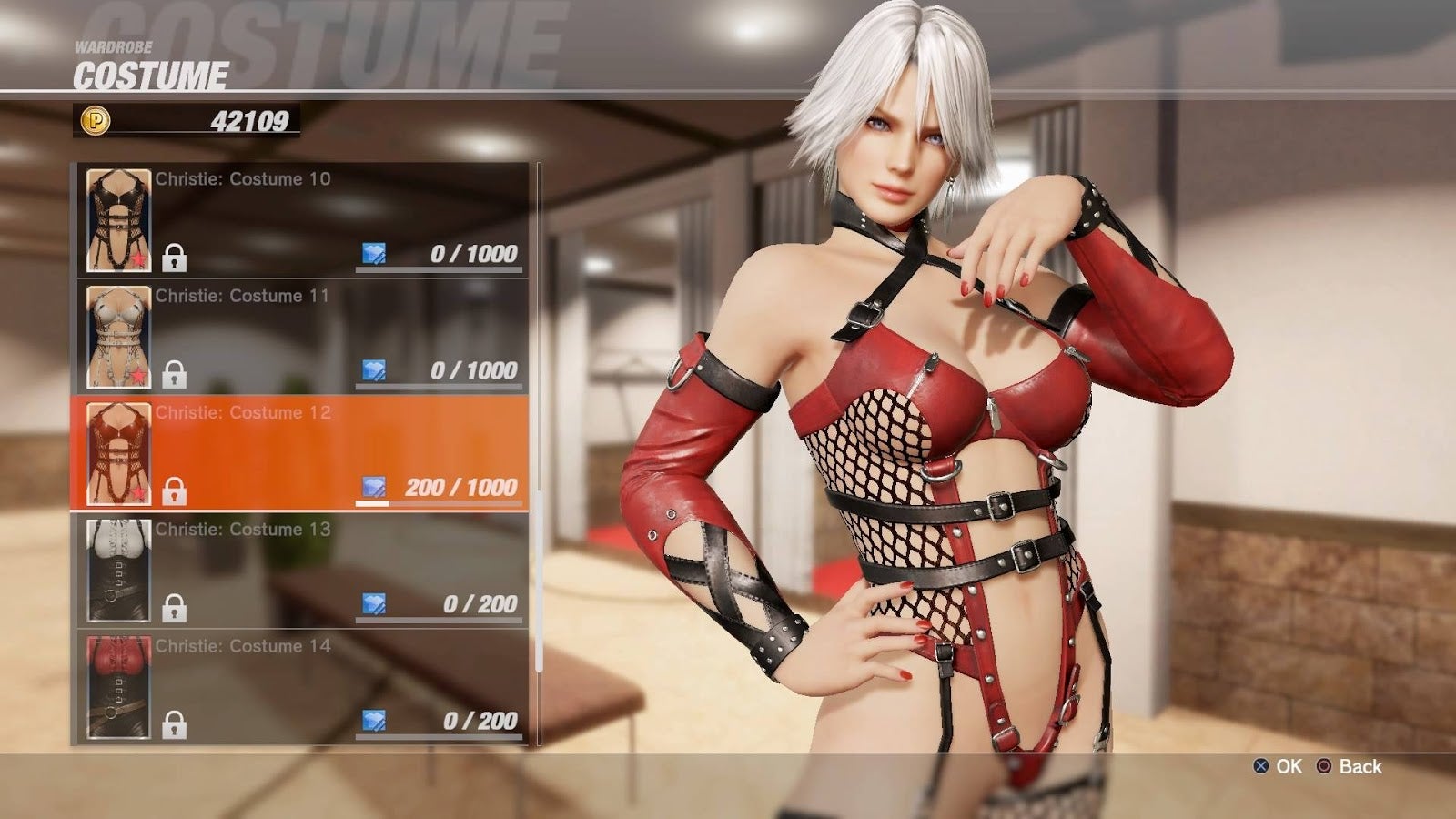 We also get a new character, sinister blue-haired scientist NiCO, whose slight frame brings the average down. Together with Mexican-American street fighter Diego, these new additions to the DOA roster demonstrate the game’s focus on character over comeliness. 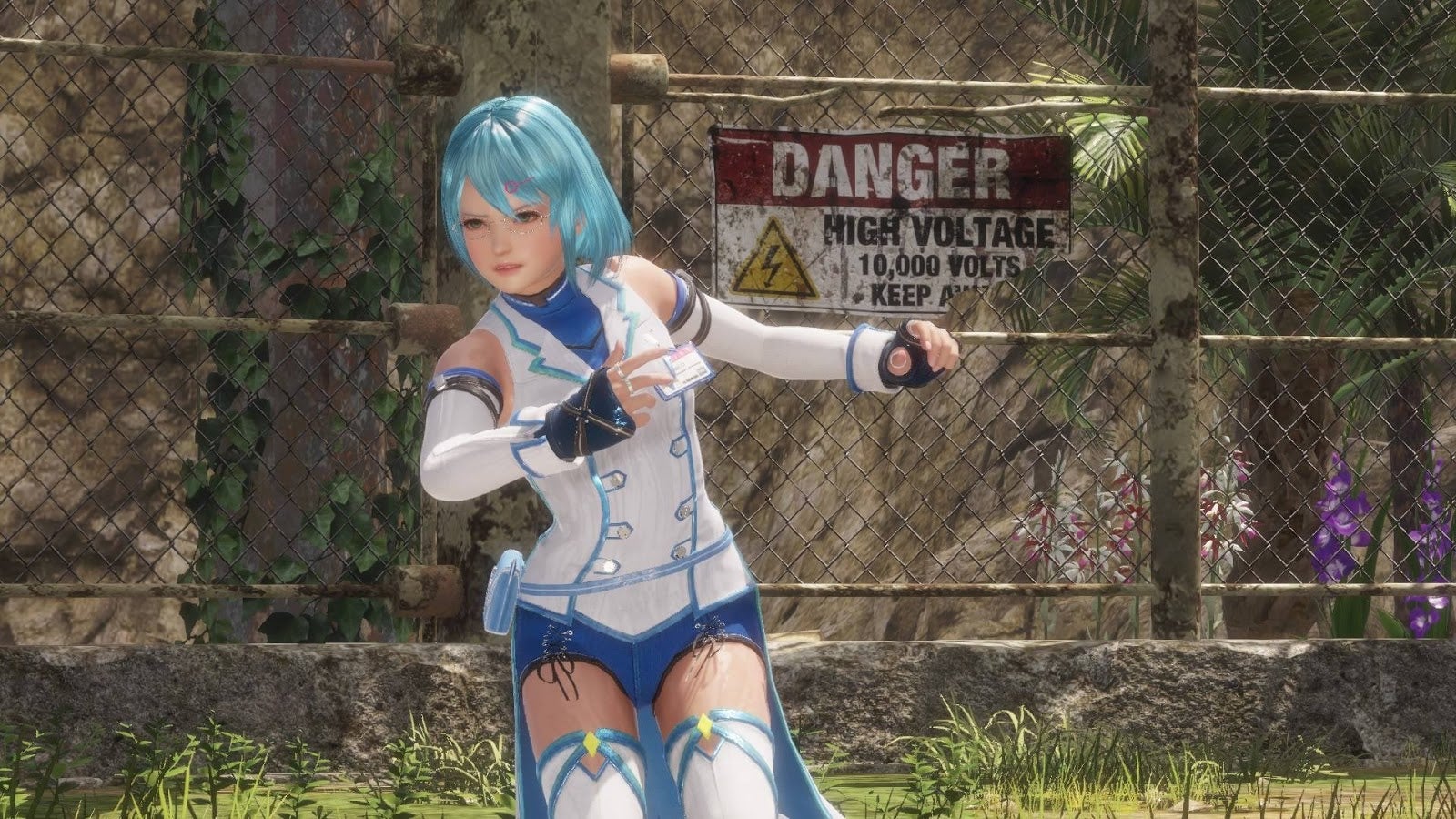 That’s not to say they aren’t all cute.

That focus carries over to the game’s expansive single-player story mode. In the three hours I spent working through the mode’s staggered series of cutscenes and battles, I’ve gotten to know many characters better than I had over the previous five numbered installments combined.

The narrative, which hops from character to character as it unfolds, involves several organisations competing to find out what’s so special about Honoka, the pink-haired fighter introduced in Dead or Alive 5, whose powers resemble those of original series villain Raidou. Watching Marie Rose’s assignment with Honoka slowly transform into a real friendship is precious. Eliot’s determination to win the tournament despite being younger and less experienced than most other fighters is uplifting.

Seeing new character Diego’s initial reluctance to join the tournament fall away with the idea of helping his mother recover from illness is sweet. And realising my favourite new character, NiCO, is an evil jerk… well, that’s just my type. That’s more than I have ever written about a Dead or Alive story, because I actually cared this time around. The characterizations are excellent. 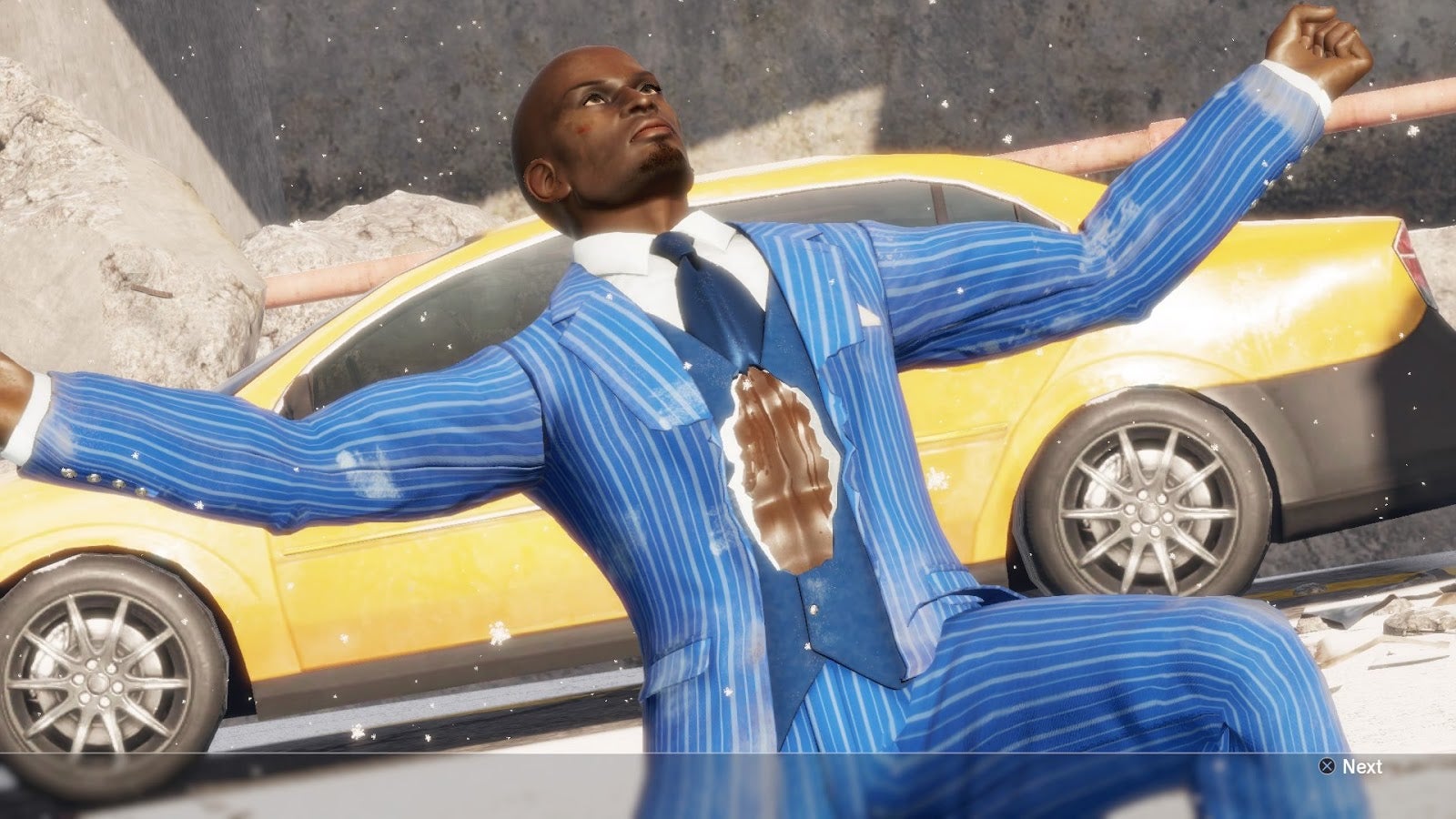 That is not how clothing damage works.

The point is that these characters, old and new, feel less like decorations and more like actual people this time around. Hopefully, that means players who otherwise may have passed on Dead or Alive 6 due to the series’ reputation will give this one a chance. They should, because the fighting is, as always, super fun.

No other fighting game series flows as well as Dead or Alive. It’s all about that hold button, which allows players to grab an enemy’s fist or foot mid-attack and counter offensively or defensively. Trading blows and reversals, sidestepping in and out of the frame and taking advantage of each stage’s environmental hazards, is enthralling. Hits and kicks land with satisfying impact. Dirt and bruising effects make characters look as bad as they should feel after taking such a beating. 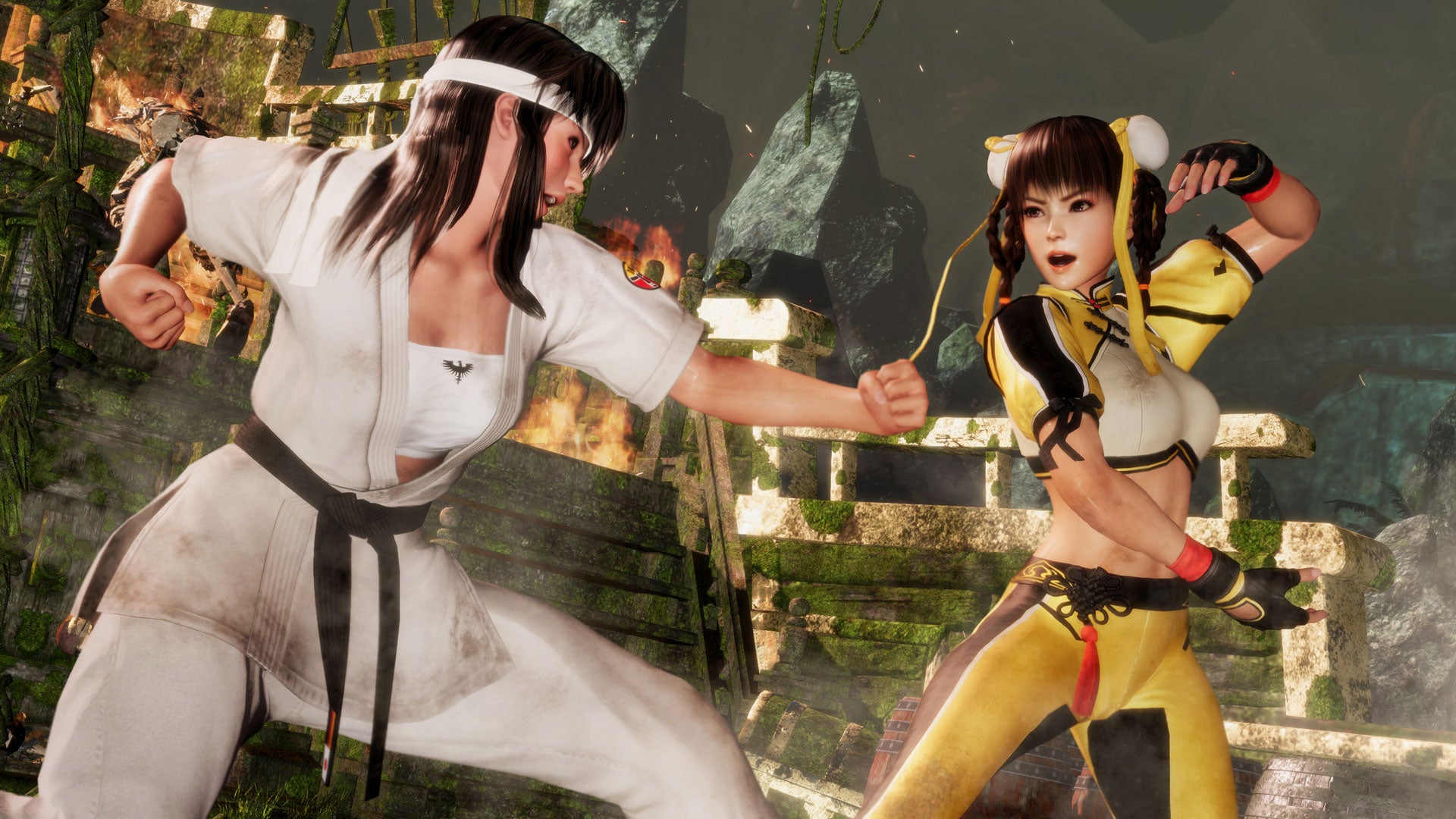 3D Fighting With A Heart Of Gold

Not feeling uncomfortable playing in front of my parents. So much solo content. Super accessible to new players. NiCO is best evil scientist.

Completed story mode and most of the DOA Quest challenges. Completed arcade mode with several characters. Took pictures in replay mode. Played a dozen or so bouts in online multiplayer. Won three. Overall play time around 12 hours so far.

What’s best about Dead or Alive 6 is that it doesn’t take long to reach a high level of play. It’s as easy to pick up and play as earlier entries in the series, with simple sequences of punches and kicks yielding favourable results. Joystick and D-pad movement maps well to the on-screen moves, making attacking and defending intuitive. The game sports many modes specifically geared at turning a novice player into an expert. There’s an expansive tutorial, and the series’ signature command training, which walks players through every move a character can make, and a combo challenge for advanced movement. 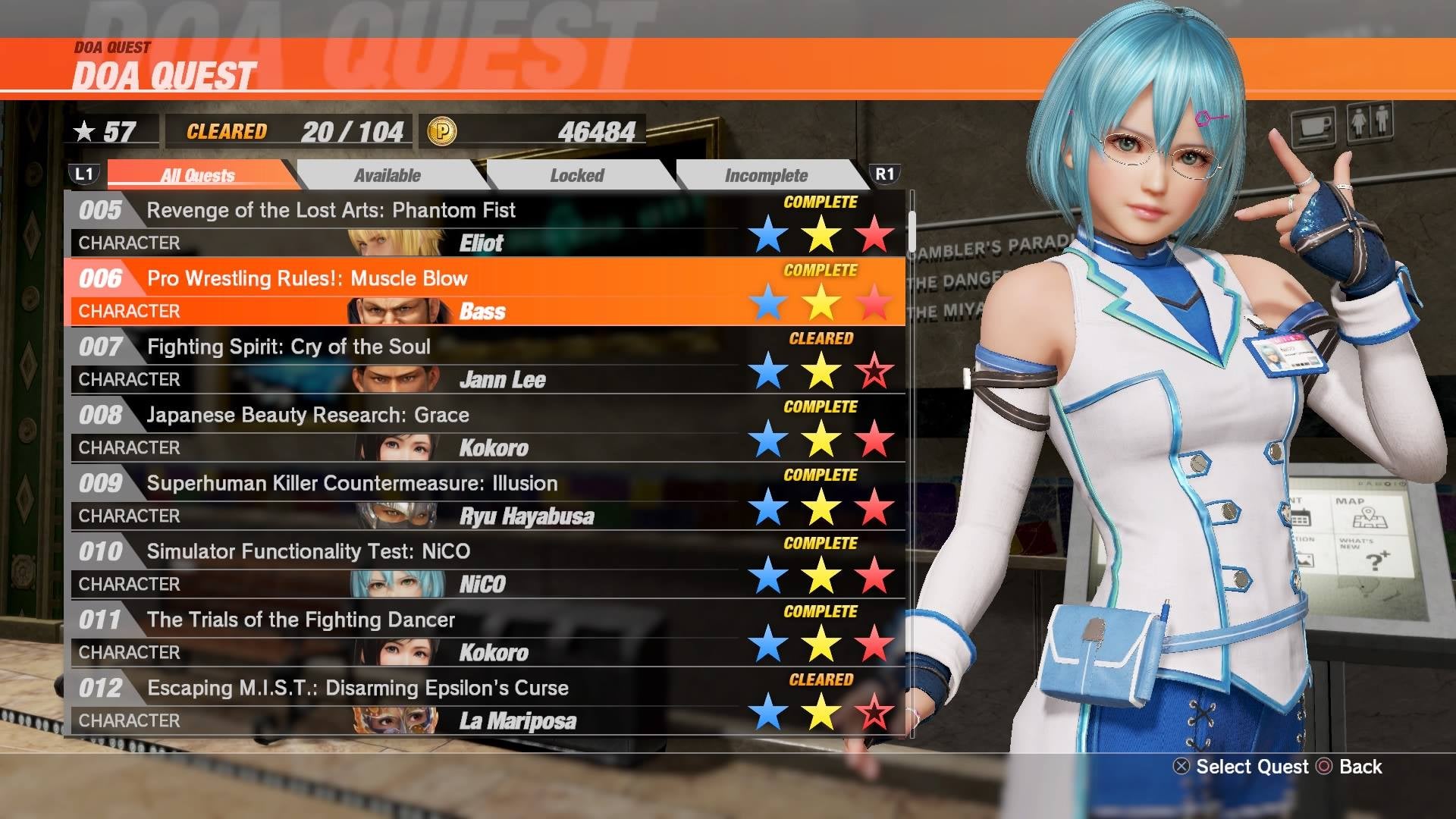 Not just another excuse for a NiCO pic. Maybe a little.

Then there’s the DOA Quest mode, which I’ve already heaped praise upon, which is pretty much training in the form on bite-sized battles. Players must complete three goals per match, such as pulling off holds, combo throws, and the like. Wins reward the player with costume pieces and entries in the game’s expansive library. Losing grants players quick and helpful access to mini-tutorials covering the goals they failed or the character they failed as.

Even if a player can’t get a hang of the game’s controls, Dead or Alive 6 has options to make looking impressive a little easier. The new Fatal Rush mechanic adds a simple, dramatic-looking combo activated by pressing a single button four times in a row.

It doesn’t do a huge amount of damage, and an experienced player can easily counter it, but it feels powerful — even more so when the player performing it has hit or taken enough hits to fill their Break Gauge, adding a powerful and violent slow-motion attack to the end of the sequence. We play fighting games in order to look and feel impressive. Fatal Rush does that for players who can’t quite wrap their fingers around a complicated combo.

Between story mode, DOA Quest mode, arcade mode, and the various practice options, there’s a whole lot of Dead or Alive 6 to play offline. Online, not so much. With the game’s lobby system delayed until later in March, the only online mode available right now is ranked matchmaking. There’s a setting that allows random online battles to interrupt solo content, but those are just ranked battles as well. It’s mighty sparse. 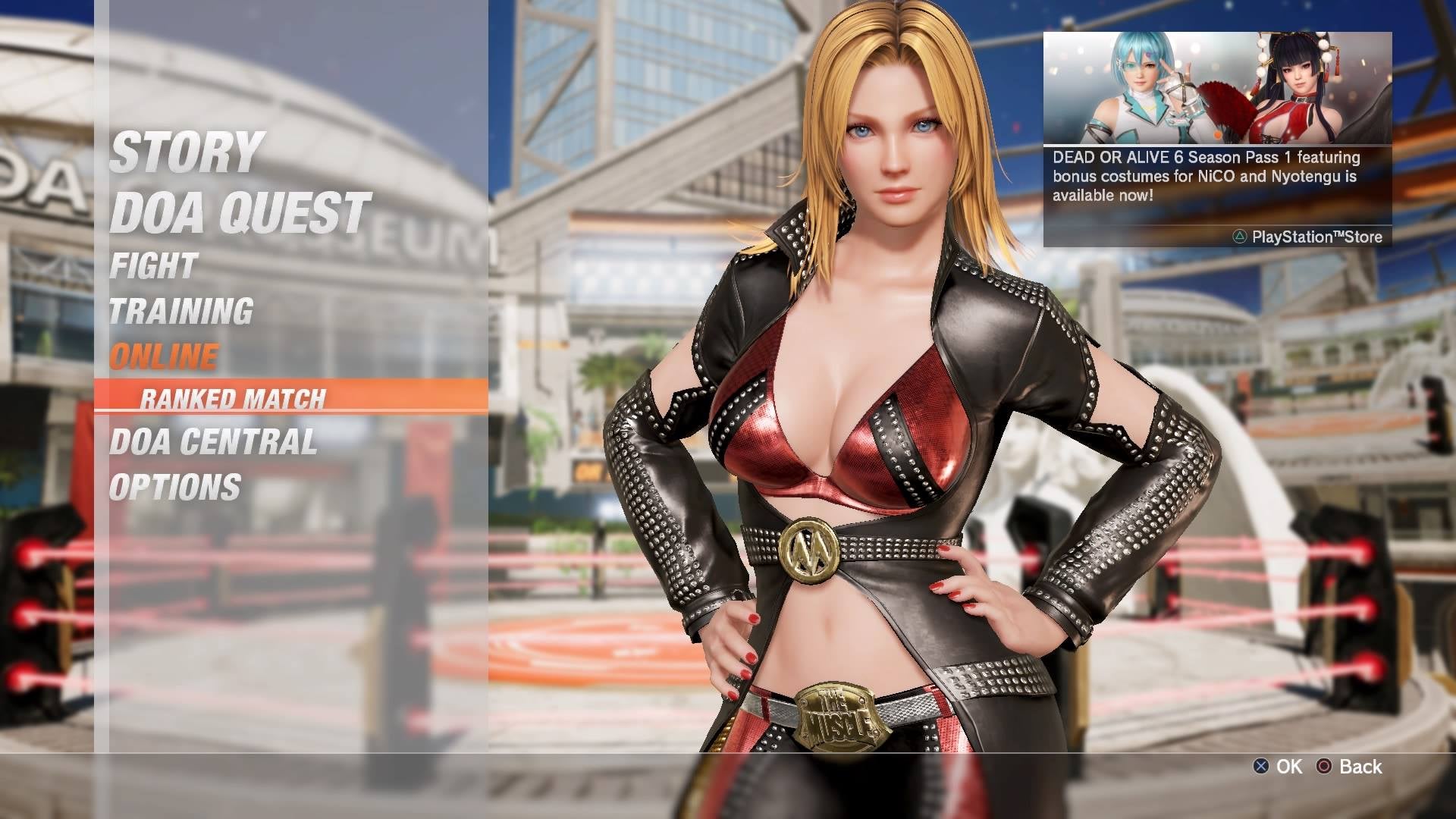 I have managed to play several online matches via the ranked system. I haven’t experienced a lot of lag—if my online experience is significantly different with tons of folks online, I’ll update my review. It could use more modes, but what we’ve got is adequate for now.

There will always be Dead or Alive fans who prefer the game focus as much on titillation as it does competition. To those fans, I say, do not despair: There are still ridiculous sexy times to be had in Dead or Alive 6. They’ve just been relegated to the game’s replay mode. There, the free camera can transform innocent fighting moves into tantalising sexual positions.

There are costumes that walk the line of good and bad taste, and short skirts still rise, as short skirts do. Fatal Fury’s Mai Shiranui is coming as a downloadable character, and she was the original inspiration for all this bouncing in the first place. It will be ok.

On the other end of the spectrum, those embarrassed by the mere idea of playing a Dead or Alive game in mixed company need not fear. There are no egregious upskirts. Bass hardly makes any inappropriate comments about men lusting after his daughter, Tina. The only character with a revealing starter outfit is Lisa, AKA La Mariposa, whose luchadora gear would look silly with a button-up over it. And if the bounce is still too much, it can be turned off in options, along with sweat, dirt and blood effects.

I’ve enjoyed the Dead or Alive series for more than two decades, but for most of that time I’ve been hesitant to admit it. Since Dead or Alive 3’s infamous “She kicks high” commercial, which portrayed fans as socially awkward perverts, it’s been hard to muster the will to try and convince folks the franchise is more than a showcase for breast physics. Now Dead or Alive 6 can do the convincing for me.

It strips away the tawdry trappings of past installments, leaving a fabulous fighting game with compelling characters worth caring about.