Over the weekend, the YouTuber known as Modern Vintage Gamer announced that Nintendo has flagged several of his videos about emulating old games on the Switch, some with hundreds of thousands of views, for copyright infringement.

YouTube automatically takes down videos with strikes against them. He said he tried to dispute the claims, but was unsuccessful and is now taking steps to reupload the videos elsewhere.

Discussing the issue in a new video, Modern Vintage Gamer, whose real name is Dimitris Giannakis, said Nintendo flagged four of his older videos over the past week.

All of the videos focus on issues related to Switch homebrew, which is the act of getting unauthorised software, including emulators for older games, to run on the platform. Giannakis said the reasons Nintendo listed for the copyright strikes were the inclusion of small amounts of gameplay footage from games like Super Mario 64 and The Legend of Zelda: A Link to the Past. 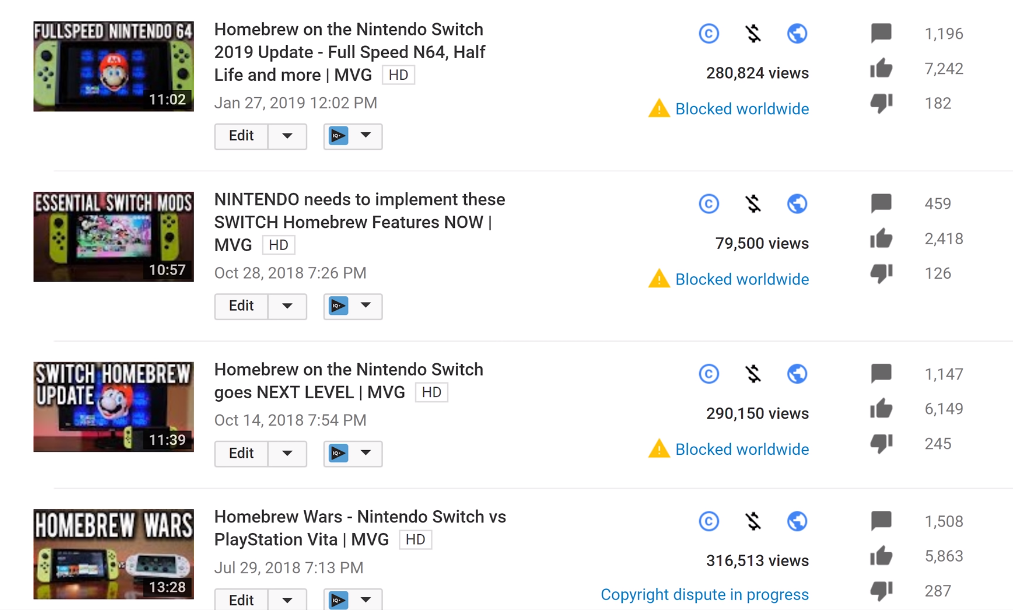 “They’re all Switch homebrew videos and claims reasons are for things like Mario Kart, Splatoon 2, which by the way I don’t have any Splatoon 2 footage in any of my videos, and Link to the Past,” he said in the video.

According to Giannakis, the claims against his videos were because of screenshots or footage of games being played on an emulator that appeared in them. Giannakis argues that his videos fall under fair use and shouldn’t be subject to the copyright strikes, adding that the game’s he’s running on the Switch are all ROMs he owns original copies of and aren’t pirated.

In the past the company has been very strict about how footage of its games can be used on YouTube, issuing takedown notices against content creators for things like Let’s Plays and even, in some cases, re-uploaded trailer footage of upcoming games. Last November, however, Nintendo announced a less rigid set of guidelines for content creators.

“We encourage you to use Nintendo Game Content in videos and images that feature your creative input and commentary,” the guidelines currently state, though Nintendo reserves the right to takedown content it feels violates those guidelines. 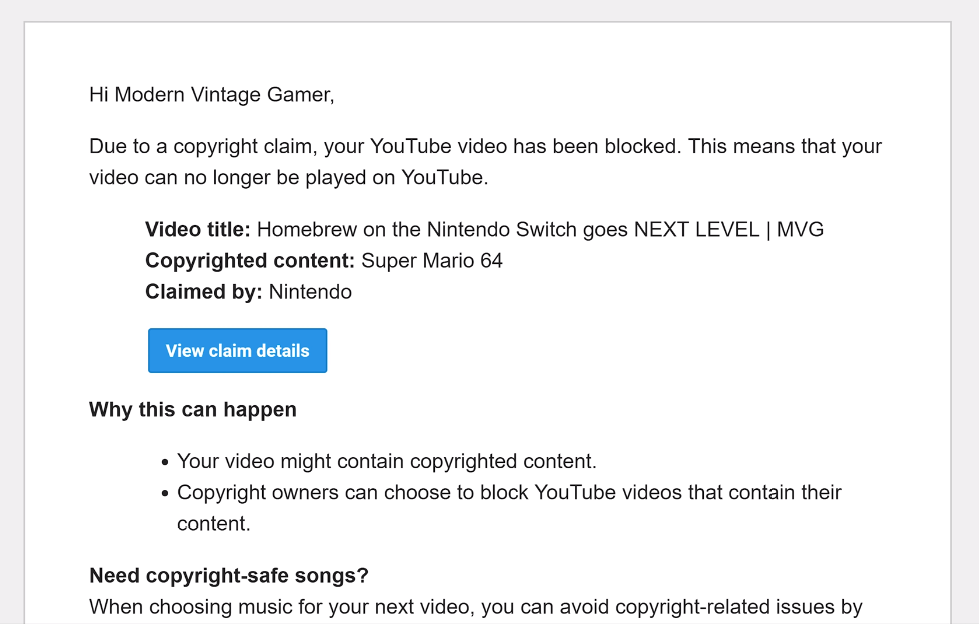 The homebrew scene on Switch has come a long way since the console released in March 2017. Last October modders announced that they had found a way to get RetroArch, a program that houses lots of video game emulators in one interface, running on hacked Switches.

This is the type of software Giannakis had been discussing in the videos Nintendo flagged.

It’s unclear why Nintendo waited until now to file copyright strikes against some of Giannakis’ content, but he told Kotaku he’s not the only person.

On April 7, YouTuber Tech James uploaded a video explaining that he would no longer be making tutorials about how to install custom firmware on the Switch due to takedown notices from Nintendo. Switch hacker Skullator NZ, who had the same problem last year, eventually moved his work to Twitch to circumvent the issue.

“Nintendo has never had a good understanding about emulation,” Giannakis told Kotaku in an email. “They see it as a threat.” He said that people who own copies of Nintendo games should be able to run the game on any emulator they choose, “without fear of repercussion.”

Giannakis said he plans to focus his channel on discussing mods for older consoles and will no longer host videos about the Switch until it becomes a legacy platform.

“While I’ve received some good advice about how to mitigate future potential copyright claims, unfortunately the threat is always there and it’s just not worth the trouble,” he said.