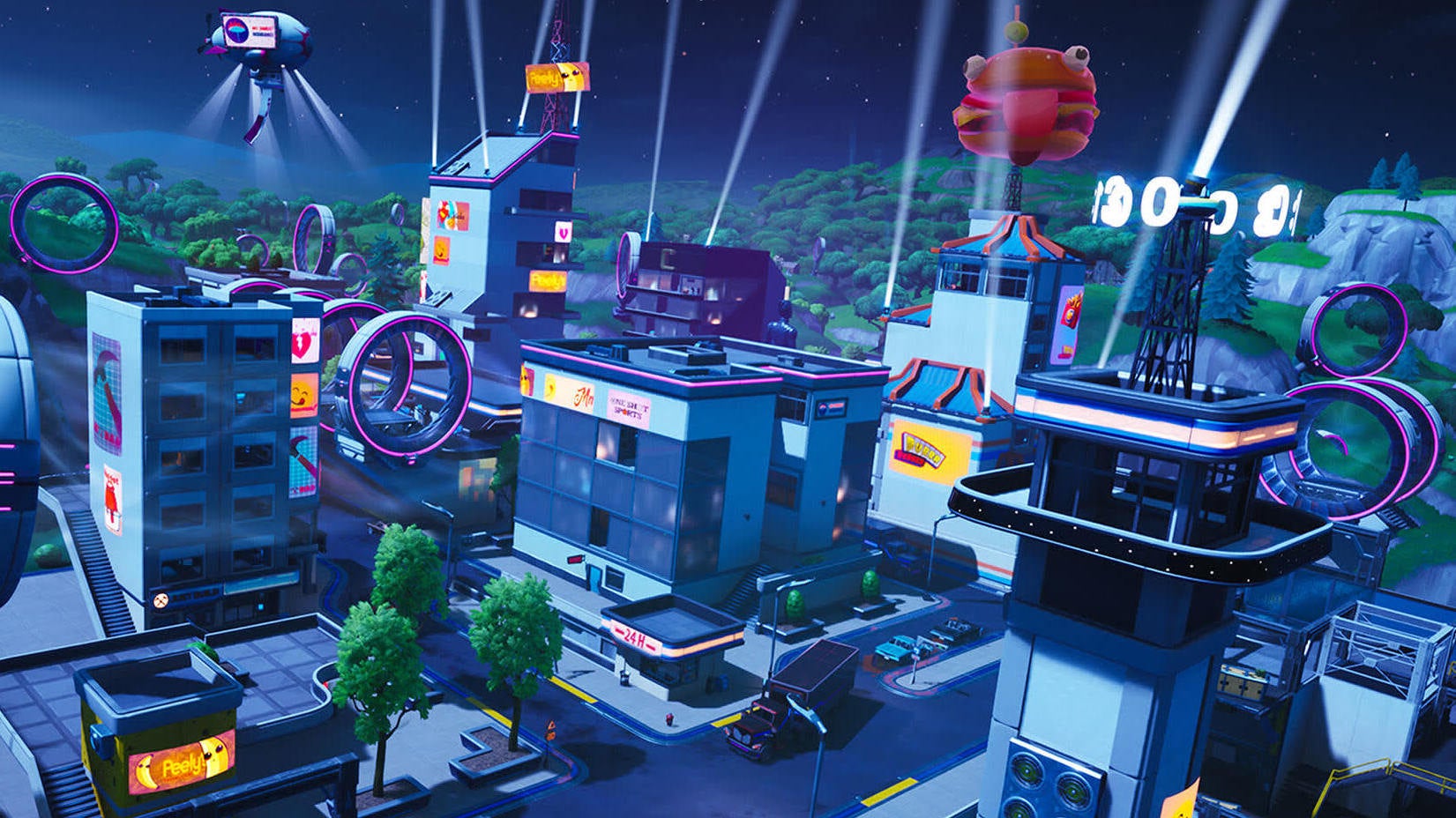 Fortnite Season 9 is here, and things look pretty different. There are new buildings, new ways to get around the map, and a lot of things floating in the sky.

Over the weekend, the game’s volcano erupted, causing molten rocks to destroy different parts of the map. With the dawning of Season 9, we have a reborn Tilted Towers, now called Neo Tilted. The buildings are largely in the same places, but now they’re covered in neon and holograms. It feels like mostly an aesthetic change, walking the line between the familiar and the new. I’m now curious to see the redesign knocks Tilted out of being the hot place to land. 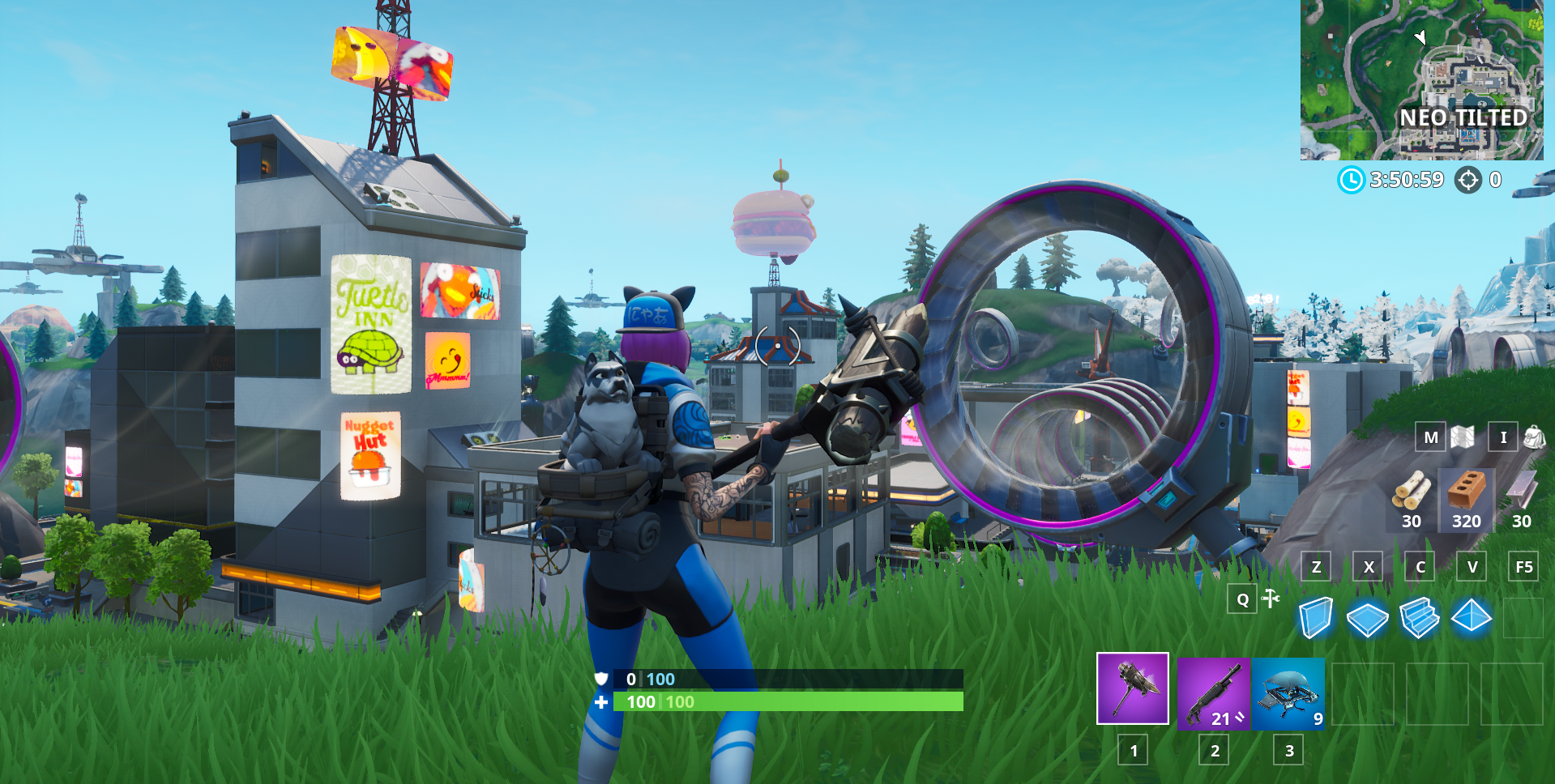 Retail Row has also gotten an overhaul and been renamed to Mega Mall. It’s a giant mall full of coloured lights and holographic storefronts. It’s a bit Deus Ex-y, which I’m not complaining about, and the revamp will certainly provide interesting new gameplay opportunities with its open spaces and new buildings.

Mega Mall also features an ice cream shop with a disturbingly-named item called a Peely Split, presumably a banana split made from the innards of the terrifying Peely. Does this spell the end of the terrible beast? Probably not, but we can always dream.

There are also new wind tunnels called Slipstreams, which players can jump into to fly around an area. They can be a little tricky to get out of—I jumped a golf cart into one only to get stuck. When I bailed, the golf cart went on its own adventure. So long, golf cart.

There are also air vents, which function similarly to the current geysers. Fortnite now also has floating air bases, which remind me a bit of Apex Legends’ moving loot ship in their design. They might not provide much tactical advantage—they’re up pretty high—but, along with the addition of blimps, it’s cool to see them up in the sky.

The volcano also has a base built around it now. There may be even more map changes I haven’t yet seen because I was too busy watching my golf cart go around and around.

Epic has also added a mysterious new item called Fortbytes, computer chips which promise to “unlock a mysterious message.” They’re only available if you have the battle pass, but I’m curious to see what they reveal. Fortnite players love mysteries, and having a new one to uncover will be fun, even if it’s a little more upfront than the game’s usual secrets.

Epic has added a new weapon, the semi-automatic combat shotgun, and unvaulted grenades. They’ve vaulted a bunch of items I was pretty fond of, such as the pump shotgun, clingers, the suppressed and thermal assault rifles, and, oddly, balloons. Balloons were maybe more fun than they were tactical, but I’ll miss just floating my way out of an awkward squad at inopportune moments.

The latest limited time mode is a three-person squad mode, something I’ve seen players want in the regular game. There’s also a host of UI and gameplay fixes, which you can see in the patch notes.

I’m not sure if I’m sold on the futuristic vibe; I’ve always enjoyed Fortnite’s more bucolic, summer camp-esque spots. But new areas to explore and new ways to move around them are always fun.