This weekend was the long-awaited battle between Fortnite‘s giant monster, Cattus, and giant robot, Doggus. It was pretty much what players expected, but it sure was dramatic.

In the only available mode, The Final Showdown, players saw Cattus appear from the water and Doggus pull free of his perch in Pressure Plant. Cattus attacked the vault, which was the site of last season’s big event. He was interrupted by Doggus firing rockets at him, and he fired what looked like acidic breath back. The two battled, ending up in the water. After vanishing beneath the waves for a few tense moments, Doggus reappeared and stormed toward the vault, only to be suddenly be tackled by Cattus.

They battled again, and Doggus pulled some kind of power orb out of the vault that he attacked Cattus with. He then grabbed a giant sword from Neo-Tilted and destroyed Cattus. He flossed (of course), gave a salute, and flew away into the sky, leaving the giant sword and Cattus’ skeleton in his wake.

The build-up to Fortnite‘s end of season 9 event has been complicated. It started with a monster trapped in Polar Peak, where players could see its giant eye and hear its heartbeat.

The monster eventually broke free and stormed across the battle royale island, ending up in the sea, where it swum around with Polar Peak’s castle on its back. Occasional footprints and destroyed buildings suggest the monster has come ashore, but no one’s seen it stomping around.

Meanwhile, the drones around Pressure Plant, which stood where season 8’s volcano once was, started building something. Over the course of the season they assembled a gigantic robot.

Once the robot was finished, countdown clocks appeared across the map, heralding an event. Players have named the robot Doggus and the monster Cattus, which obviously meant the countdown was gearing up for a mech-versus-monster battle. 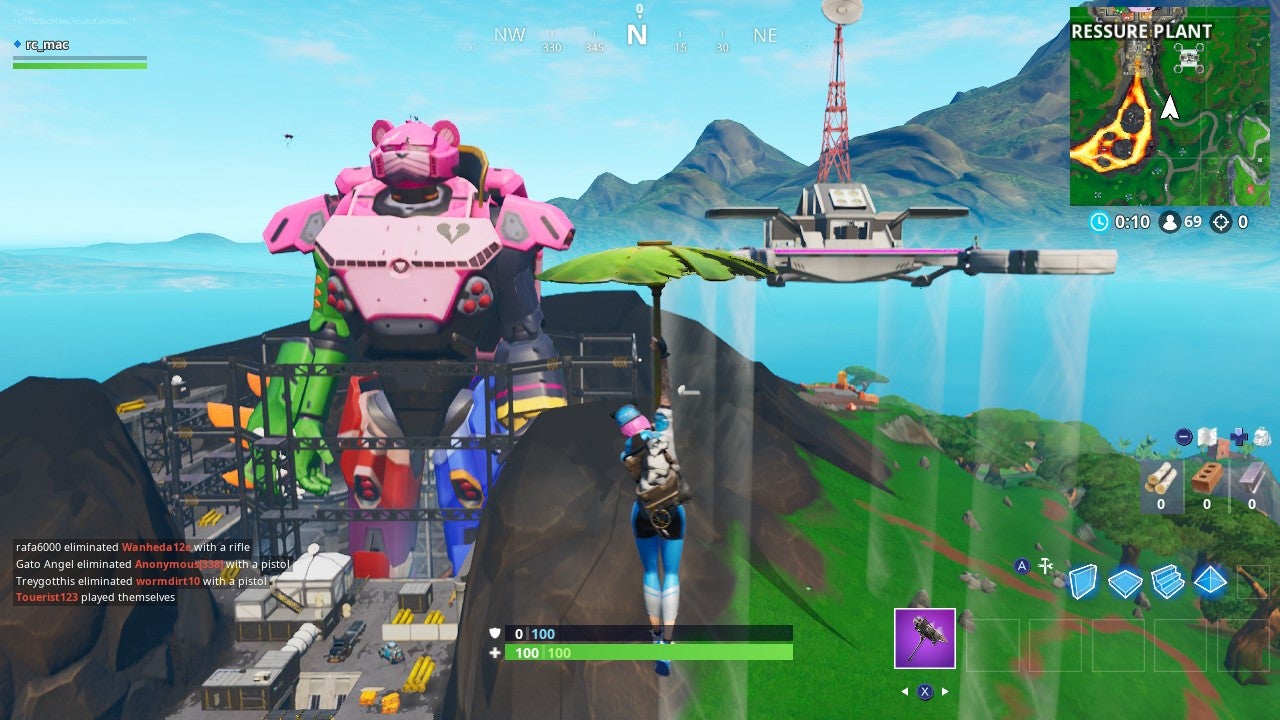 Drifting by the entire robot

Cattus and Doggus’ showdown was pretty much the giant battle we expected, and players are already looking for how else it might have affected the game’s map. With season 10 on the horizon and the World Cup next weekend, we’re sure to keep seeing changes in this constantly-changing game.