When Your Frustration At A Game Makes You Even Worse 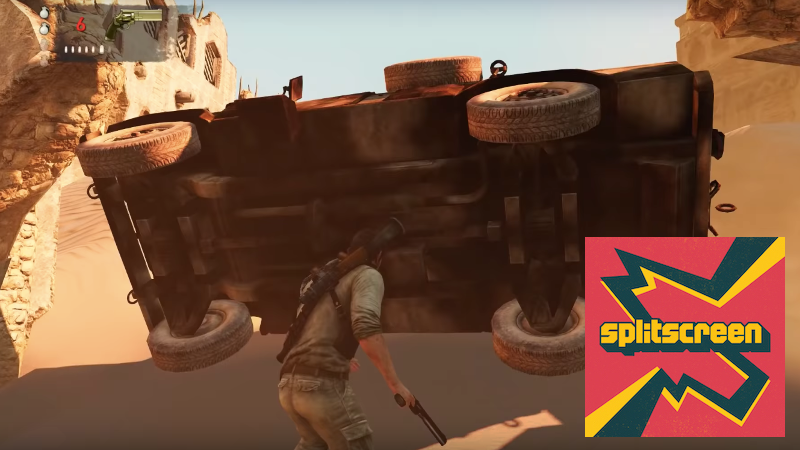 An unsuspecting Nathan Drake about to get crushed under a truck in <em>Uncharted 3</em>. (Screenshot: <a href="https://www.youtube.com/watch?v=nVX6weqKsTA">YouTube</a>)

Video games can be frustrating. Sometimes, that frustration can overpower your ability to play them well. There’s a term for that: In those moments, you’re “tilted”. On this week’s Kotaku Splitscreen, we had Kotaku’s newest staff writer Joshua Rivera join us to discuss the ways that games have tilted us and how we deal with it (or, in some cases, don’t).

First, Kirk and I talk about games we’re playing, with me checking out the new Switch-exclusive Marvel Ultimate Alliance 3 and Kirk still playing Dishonored: Death of the Outsider. After that, we bring Joshua into the mix (22:27) for some discussion of getting frustrated by games, as well as the fact that three is the perfect squad size.

We close with off-topic talk (58:57) about Billions, Good Omens, Veronica Mars and Kirk’s music pick of the week.

Maddy: The only way I know [to stop tilting] is to take a break from the game, but sometimes I’m like, this is the only few hours I have to play a game, and I’m spending it on a really difficult boss that I really want to be able to beat so that I can advance in this game, or have a good experience later, but I’m just ruining my own time by forcing myself to continue to play.

Also, by being in that psychological space, I’m probably performing worse at the game. What are you guys’ tips for getting around that?

Kirk: The break thing, as far as tips go, is probably the best thing. Especially in a single-player situation. I think one reason it tends to rear its head in multiplayer situations is because it’s harder to take a break when you’re playing with a group of people, because there’s this feeling of, “we’re all doing this”.

That thing you said, Maddy, the feeling of, “I’ve only got two hours, and here I am, stuck on this thing,” even that is a form of stakes. There starts to be a feeling of, “Oh man, I only have a set amount of time,” or “I set aside this evening to play this game, and I’ve basically wasted the time. I’ve spent all my time beating my head against the game.”

And you’re like, “Well, there goes this whole weekend! What was I even doing!” It’s that same feeling of anger over wasted time.

I live with my partner, and she does not play video games at all. So, one day she’ll be walking by the living room where I’m playing, and I’ll be like, “Rrngggh!” And she’ll look at me like I’m a freaking alien. Because nobody gets that mad at a movie.

Kirk: That’s true. Emily doesn’t like it when I’m playing a specific type of game, actually, like Divinity: Original Sin 2, a turn-based tactics game. A lot of times, I get very stressed out by those games.

I really enjoy it as part of my experience, but there’s a lot of, “Oh my god. Oh, shit. Oh, you idiot! I can’t believe I did this! No, you arsehole, no!” There’s a lot of that. There will be times where I’m berating myself: “Oh, of course, because I am a giant idiot, I did that.”

I’ll say that out loud. And I’m wearing headphones, kind of oblivious, and she’s sitting there listening to me just beat on myself and is like, “Dude, I don’t like it when you’re hard on yourself about that kind of thing.” Which makes me realise I’m externalising the tilt that I’m feeling toward myself, maybe, in those moments.

Maddy: But are you still having fun doing that, though?

Maddy: I feel like I also have that experience with those kinds of games, where I’m like, “Oh, idiot!” But I don’t even mean it that way.

I’m still having a fun experience playing StarCraft or whatever it may be, because the stakes are high, but in a fun way that’s exciting, and maybe that isn’t translatable into what I’m saying or my body language, but it’s a more positive experience than me throwing myself at a boss I can’t defeat for an hour.

Kirk: It’s like what you were saying, Joshua. When your partner walks by and hears you, it’s this very different perspective on the experience that you’re having. That’s also just an interesting perspective to consider: The person outside.

Kirk: There’s a fine line, I guess. I’m usually having a good time. But it can tip over into actually being just frustrated. Although usually with that kind of game, turn-based games — those are the games that I save-scum and do all kinds of stuff to get through — it isn’t the same as a God of War boss fight or a Bloodborne boss fight.

I think one thing that really drives me nuts is when I feel like I’m angry at the game as much as I’m angry at myself. Sometimes I tilt at a game. I remember — I think it was Uncharted 3, a lot of cheap deaths in Uncharted 3. It was one of the frustrating things about that game.

The enemies a lot of times would laugh at you after they killed you. You would die, and you’d hear your teammate, Elena or whoever, would be like “Nathan! Draaaake!” Because you died. And that instrument, whatever it was, would play and the screen would go black and white. Then you’d hear some guy, some gomer that killed you, who would be like, “Ha ha ha ha ha! Got you!”

It was the worst. You’d hear it over and over and over again, as you died. I remember that made me very upset at that game. I guess that’s part of it, right? You can feel mad at the people who make the game: “F you people for making this stupid thing!”

Maddy: But you don’t contact them. You don’t say that. You don’t post that on the internet —

Kirk: [Laughs.] Yes, good point! I am in no way endorsing harassing game developers over their decisions. They make wonderful things, and sometimes games are hard, and that’s totally fine. I mean a more abstracted feeling of frustration.

Which is an interesting thing for game developers to consider. They are trying to frustrate us. A game has to place things that we must then overcome, and some of that involves frustration.

It’s a fine line, and sometimes even games that I’ve been really mad at, just because I’m having a hard time beating them, it’s wound up being a rewarding, cool experience. It is possible to experience tilt in a safer, positive way. Or is it?

Joshua: I think about this a little bit too: It’s OK to be bad at a game. It’s OK to be so bad at a game that you can’t finish it. Right? I think that’s fine. I will be upset if I only had $60 to spend and I couldn’t get further than an hour into a game.

I also remember when I was a kid and only had so much money, I tried to know everything I could about a game before I bought it. So, I generally had a good idea what I could handle and what I couldn’t. If I can’t play a game, if I’m not good enough for it, that’s fine. Maybe in six months, or a year, I will be.

I like to interrogate the notion of, “I deserve to see everything that’s in this game.” I don’t think that’s healthy. I think one of the cool things about games is that you can have your own unique experience and it’s different from everybody else’s who played the game.

I think it’s a less interesting world where we all have the same experience with a medium that is so dynamic.