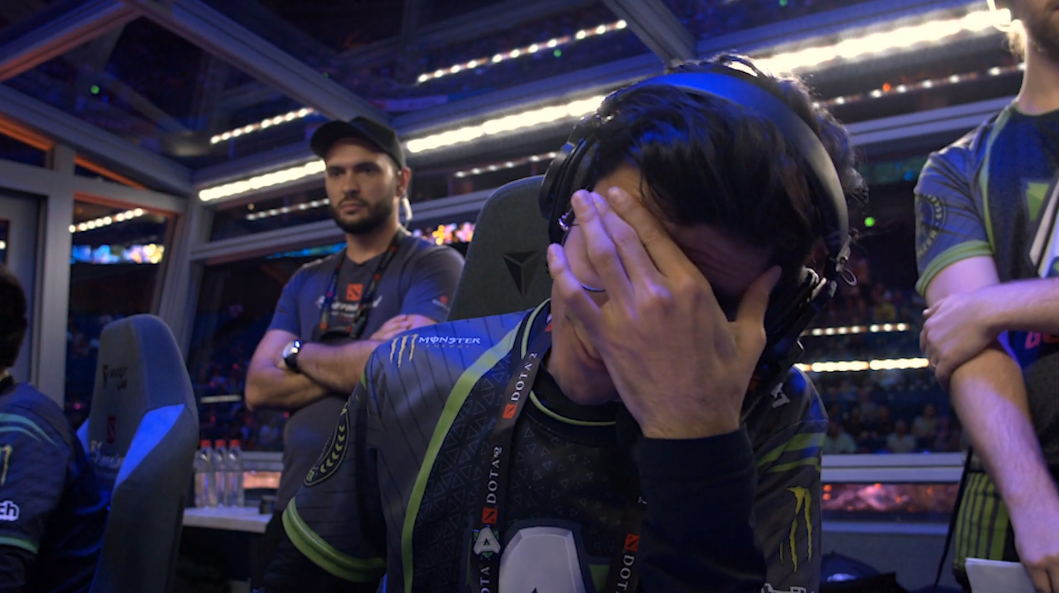 Screenshot: Dota 2, Twitch
To sign up for our daily newsletter covering the latest news, features and reviews, head HERE. For a running feed of all our stories, follow us on Twitter HERE. Or you can bookmark the Kotaku Australia homepage to visit whenever you need a news fix.

Painful counterfactuals stalk even the best athletes. On Monday, Manchester United star Paul Pogba missed an easy penalty, dooming his team to a 1-1 draw against a lesser opponent. Last night, a Dota 2 player tried to ban a particular hero from the match, but ended up selecting him instead.

It’s impossible to reduce any match to one or two key moments and say that if they had only gone differently, the final result might have changed. But whatever the odds were for Swedish Dota 2 team Alliance to beat Royal Never Give Up in the first match of the tournament’s lower bracket, selecting Gyrocopter in the final moments of the hero selection phase didn’t help.

Twenty-five-year-old Aydin ‘iNSaNiA’ Sarkoh, the team’s captain, was the one responsible for the blunder, locking the hero in for his team when he had really only meant to ban him so that Royal Never Give Up wouldn’t have him as an option. “Oh my god. Are you serious? Did this just happen?” Sarkoh immediately said after realising his mistake.

The choice initially surprised the announcers as well. “It’s definitely throwing Royal Never Give up for a loop,” one said, though in reality Royal Never Give Up was ecstatic. “Yep, they’re gonners now,” a mic picked up one of the players saying.

Dota 2 has over 100 heroes, and teams spend lots of time, money, and brainpower trying to craft the right strategies around which heroes to pick in which situations against which opponents. A great Dota 2 player could trounce just about anyone else in a public match no matter which hero they had, but in a game against other top players, it can make all the difference.

Despite effectively shredding its playbook, Alliance went on to have a very good match over all. At least up until the 43rd minute. That’s when Michael “miCKe” Vu, who as the team’s number one position was playing Gyrocopter, found himself ambushed in the woods just outside his base.

While his team tried to save him, the surprise attack succeeded, leaving Alliance without the manpower it needed to defend in the waning minutes of the game. A minute later, the game was over.

“Sorry,” Sarkoh tweeted after the match.

Fortunately for Alliance, which still has a bright future ahead of it, Dota 2 continues to pay out huge prizes. Despite exiting this year’s world championship in 13th place, they’ll still be walking away with $US506,103 ($746,533), 1.5 per cent of the record-setting $US33.7 ($50) million overall prize pool.