The X-Men have been through so much over the years. So many cycles, so many rises and falls, alternate realities, canonical reshuffles, game-changers, and world-enders. To envision its wild new era for mutantkind, House of X #2 just re-contextualised everything we’ve ever known about the X-Men — so it can break it apart, once and for all.

If House of X #1 was about the cyclical rise-and-fall storytelling that has come to define the team over their entire existence, House of X #2 — by Jonathan Hickman, Pepe Larraz, Marte Gracia, Clayton Cowles, and Tom Muller — brings those two elements together to do something truly, outstandingly audacious: Make everything that has ever happened to the X-Men matter.

And then blew it all up into meaningless little pieces as a new future is forged for every mutant going forward.

We’ll get back to that blowing up bit momentarily, but first, it should be mentioned that the idea of making everything in the confusing and often contradictory back story of a half-a-century-old cast of comic book characters actually fit into one grand design isn’t new. Marvel’s currently doing that thought experiment with Chip Zdarsky and Mark Bagley’s what-if miniseries Spider-Man: Life Story. Hell, it’s not even the first time it’s been attempted with the X-Men; Ed Piskor recently did exactly that, and even called it Grand Design for good measure.

But what House of X does in this regard is less of an administrative task than Grand Design was, an artistically clever way to onboard readers unfamiliar and perhaps rightfully petrified of attempting to understand the wild depth of the X-canon. House of X #2 takes the idea of this cycle of storytelling — that the X-Men, and mutants in general, are constantly torn between states of acceptance and persecution — and makes it part of the text entirely by immediately revealing an alarmingly simple twist: Moira MacTaggert is a mutant. She always has been. But what makes Moira House of X’s secret weapon, what makes her the pathway to tell something that feels truly exciting and new about these characters for the first time in years, is that her mutant ability is re-incarnation — every time she dies, through causes natural or otherwise, she goes back to the point of her conception, but with the all the knowledge she learned in her prior existence.

In one simple moment, Moira becomes Hickman’s tool to examine the mutant cycle at large, because she is the cycle, and we follow her not just as she comes to this realisation, but through life after life, after she uses it to examine the very existence of mutantkind, not just for her own sake but for Charles Xavier, for Magneto, for Apocalypse, and anything and everything in between.

House of X #2’s audacious journey through the multiple lives of Moira has some dramatic ground rules to establish. Firstly that, even though her ability lets her re-incarnate back into her in-utero self with all the knowledge of her past lives intact, Moira is not technically immortal, and can die forever if killed before her mutant powers manifest.

It also establishes, through the mutant Destiny — whose powers of precognition let her see Moira’s whole existence, not just a singular one of her lives — that at some point, after 10 (or possibly, depending on a choice that will almost certainly show up at the most inopportune time later in this series, 11) lives, Moira will indeed truly perish for good. 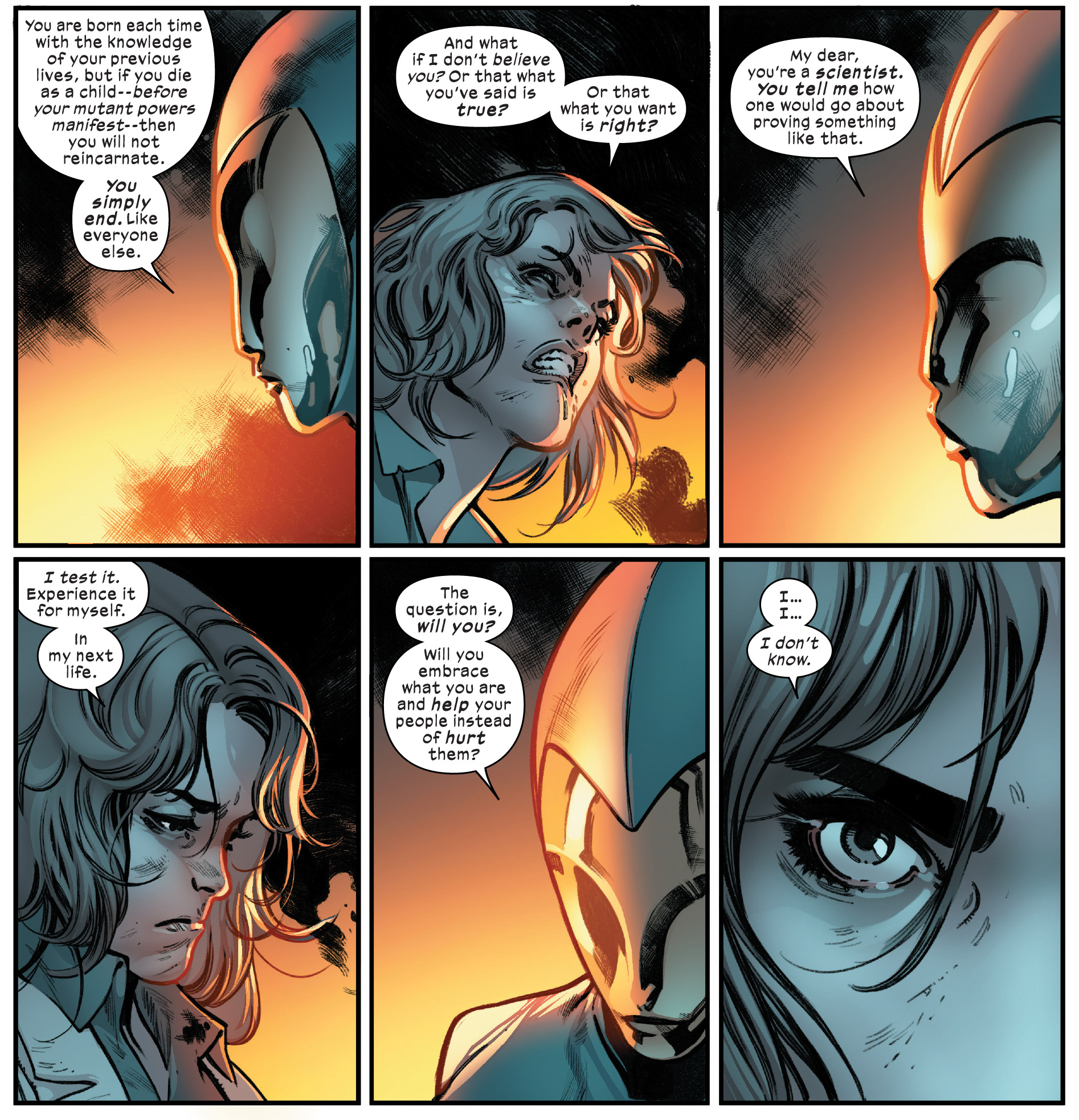 These rules give her an existentially ticking time bomb that drives her 10th life, referred to simply as Moira X to make the decision she makes concurrently at the end of Powers of X #1 and House of X #2: Allowing a young Charles Xavier, in the era just before he reveals his mutant nature to the world and sets out his plan to create the X-Men, to read her mind and see all nine lives worth of experience that came before her.

You see why Marvel insisted you call Powers of X “Powers of 10” now, yes?

While Moira’s cycle of death, rebirth, and inherited knowledge is fascinating from the inherently comic-book-y angle of engaging with it simply as a powerset — is she one of the smartest mutants alive? One of the most powerful? Is she a member of the Omega-level elite? — what makes it so crucial to what House of X is doing with the X-Men at large is that it gives Hickman, Larraz, Gracia, Cowles, and Muller a lens through which to both re-contextualise and re-analyse every X-Men story ever told.

As Moira lives her lives and begins to examine the Mutant condition, we see her own thoughts about not just her own abilities but about mutantkind at large evolve. At first, she sees it as a blessing, a chance to live life with foresight and knowledge. Then, it quickly becomes a curse as the familiarity of having already experienced what those around her have not becomes a bitter pill that leaves her distant and cold.

That initial growth sees Moira progressively begin fostering attempts to rid the world of mutants altogether, first by attempting to make a cure — an idea that’s been floated many times in X-stories before, but most notably in Joss Whedon and John Cassaday’s Astonishing X-Men run in the early aughts—for the x-gene, only to be harshly reminded of what a futile gesture that is by the intervention of Destiny and Mystique. 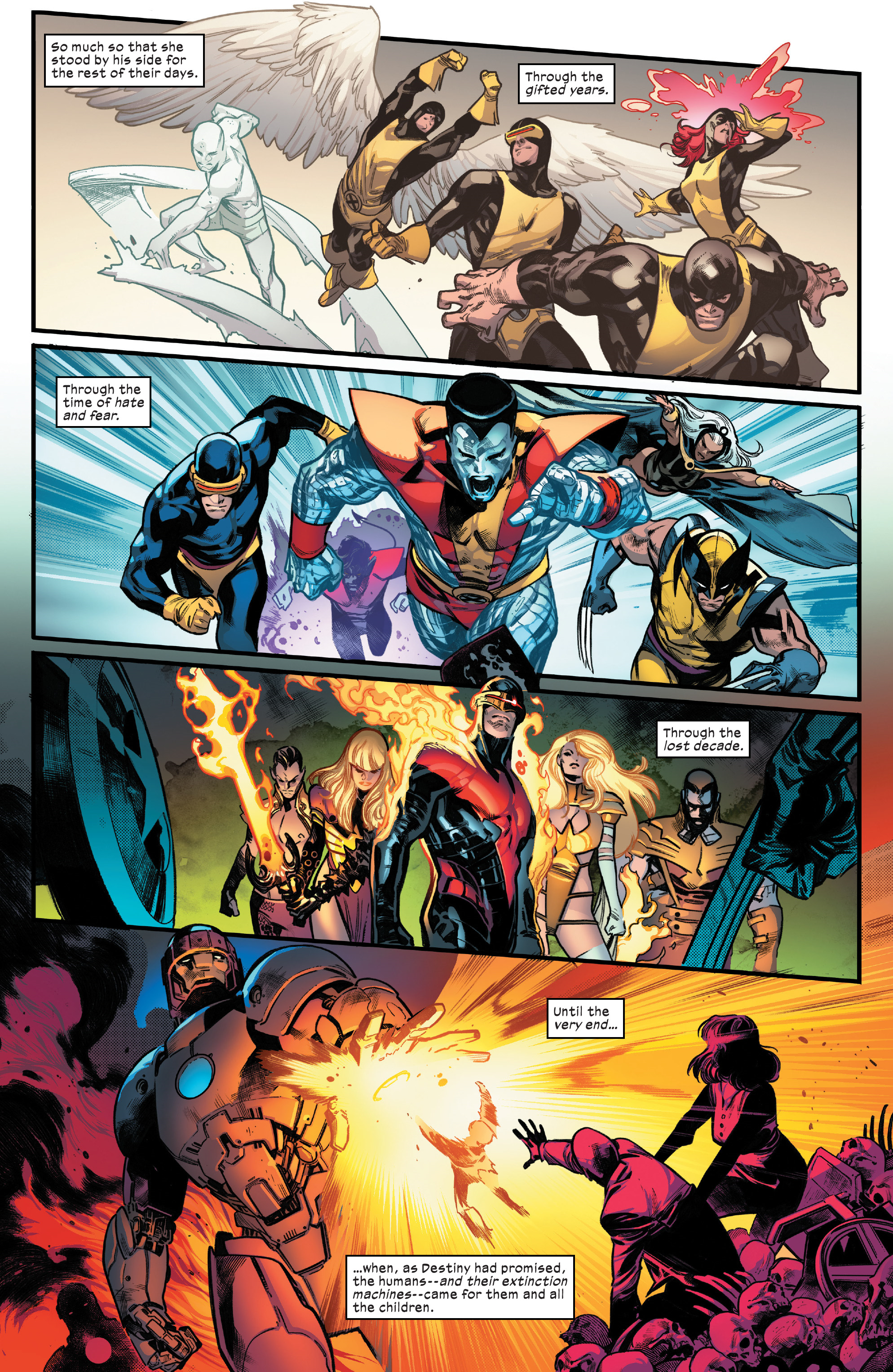 From there — and now gifted with the knowledge that she has roughly 10 lives to make the most of — Moira treats her existences as a cyclical thought experiment that becomes Hickman’s avenue to interpret the metastories constantly told about what mutants Should Be. Should they reveal their gifts to the world in the hopes of acceptance? Moira, working alongside Charles Xavier, tries, only to witness humanity’s response in the form of the sentinels. When she tries with Charles again, fostering a more militant yet still openly peaceful mutant dream, it still ends in tragedy.

So then should mutants be the vengeful homo superior, using their gifts to ascended to dominance? Moira, now working with Magneto instead, tries, only to be halted by the X-Men and the other heroes of the world. So she goes even harsher in her next life, working with Apocalypse to bring about the Days of Future Past timeline, even for that to ultimately fail. Another war, more bloodshed, it all comes to the same conclusion for Moira: none of what’s come before, none of what’s been thought before, works. And so we come once again to that final panel, as Moira, or rather the narrative voice that’s followed her throughout this entire issue, makes at long last the thesis of what these twin series have to offer: the only way the X-Men and the stories we tell about them can truly change is to break every rule we’ve ever known about them. That starts with giving a young Professor X, a man with a dream to change the world for his people, the knowledge of nine existences worth of mutant stories: the knowledge of Moira’s story, and the — putting it diplomatically — skewed perspective that brings, too. Which leads us to where we are now in the Marvel Comics present, as a distant and suddenly alien mutantkind makes itself a sovereign nation.

House of X #2 is more than just an audacious twist — if all it was was the reveal that Moira MacTaggert was a mutant all along, it would come off as an empty gesture designed to shock rather than have anything to say. But Moira, or rather Moira X, has become Hickman, Larraz, Gracia, Cowles, and Muller’s most fascinating tool. She’s not only one of the most interesting mutants in years just from a conceptual, powers-based standpoint, but a lens through which literally every critical generation’s approach to X-Men storytelling can be examined. 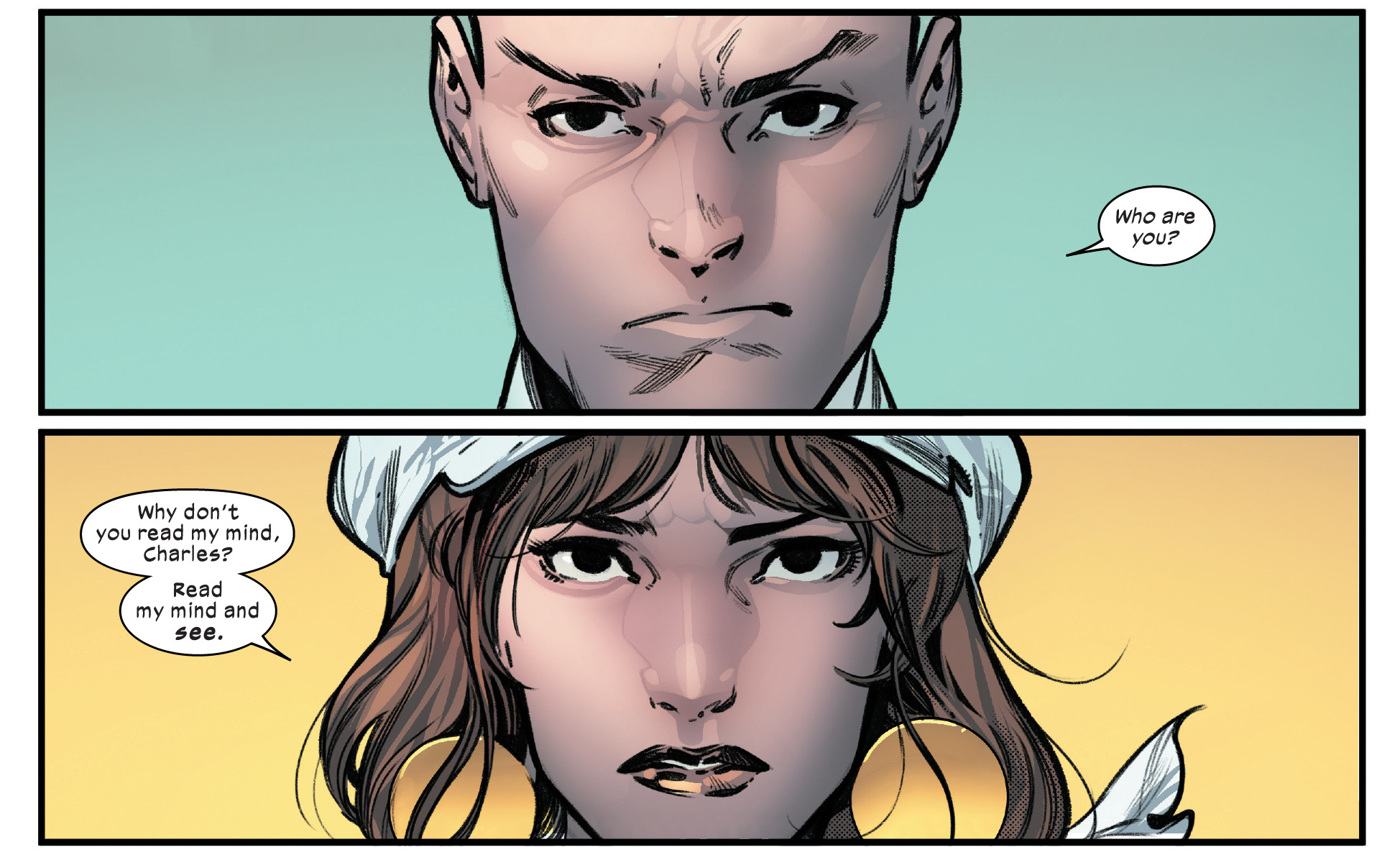 … and Charles Xavier is the man to help her do it. (Image: Pepe Larraz, Marte Gracia, and Clayton Cowles, Marvel Comics)

In doing so, and presenting that literally as part of a path to an entirely new era for them, House of X becomes one of the grandest and boldest ideas Marvel has pushed for mutantkind in decades.

It’s fitting that for a set of characters so restrained by rules in and out of their textual existence — from mutant regulation within the narrative to just simply critical debates about the kinds of stories we can tell about X-Men at large outside of it — so much potential can be found in simply asking what would happen if all those rules were broken.