Daemon X Machina, out September 13 from Marvellous, is a game about gigantic customisable mechs. Here is another way to describe it: the worst filler episode of your favourite anime series. It is a mess of a game, with a story mode chock full of unintelligible cutscenes, repetitious anime tropes, and a core of mech gameplay that is highly customisable but starts to blend together due to repetitive gameplay and drawn out gunfights.

The Switch exclusive is a third-person action game in which you pilot an Arsenal, a weaponised mech. You spend time customising your mech’s appearance and loadout, and then you accept missions from an AI called Four on behalf of mercenary supergroup Orbital. The missions are largely repetitive: fight some AI, or protect a building by fighting some AI.

The game occasionally shakes things up with a gigantic mech boss that dwarfs you in size, which adds some desperately needed variety and is the real core of the game’s fun. One encounter has you facing a huge spider-like mech that jumps around the battlefield and tries to crush you as you manoeuvre to aim for its weak underbelly.

Another has you fighting a tanker aircraft with lasers that tries to ram you between charged shots. These encounters are far more fun than fighting other pilots, which at a certain point begins to feel like aimlessly firing bullets into an endless morass of enemy health. It doesn’t help that the game’s lock-on system feels a little bit too fast and loose, even after optimising your build.

The gameplay is fine, with flashes of fun, but isn’t good enough to outweigh Daemon X Machina’s storytelling problems. The game fills the checklist of anime cliches and is dense with forgettable terms and aggravating characters who say things such as: “I’m big bad Gargantua, twerp! I don’t need no details! Let me get to wreckin’ already!”

Your created character is a Reclaimer, a very diplomatic way of describing a group of mercenaries who pilot mechs to essentially resolve territory disputes in a resource-rich area called Oval. Complicating this task is a war with rogue AI beings called Immortals, or at least, that’s what the game tells you. 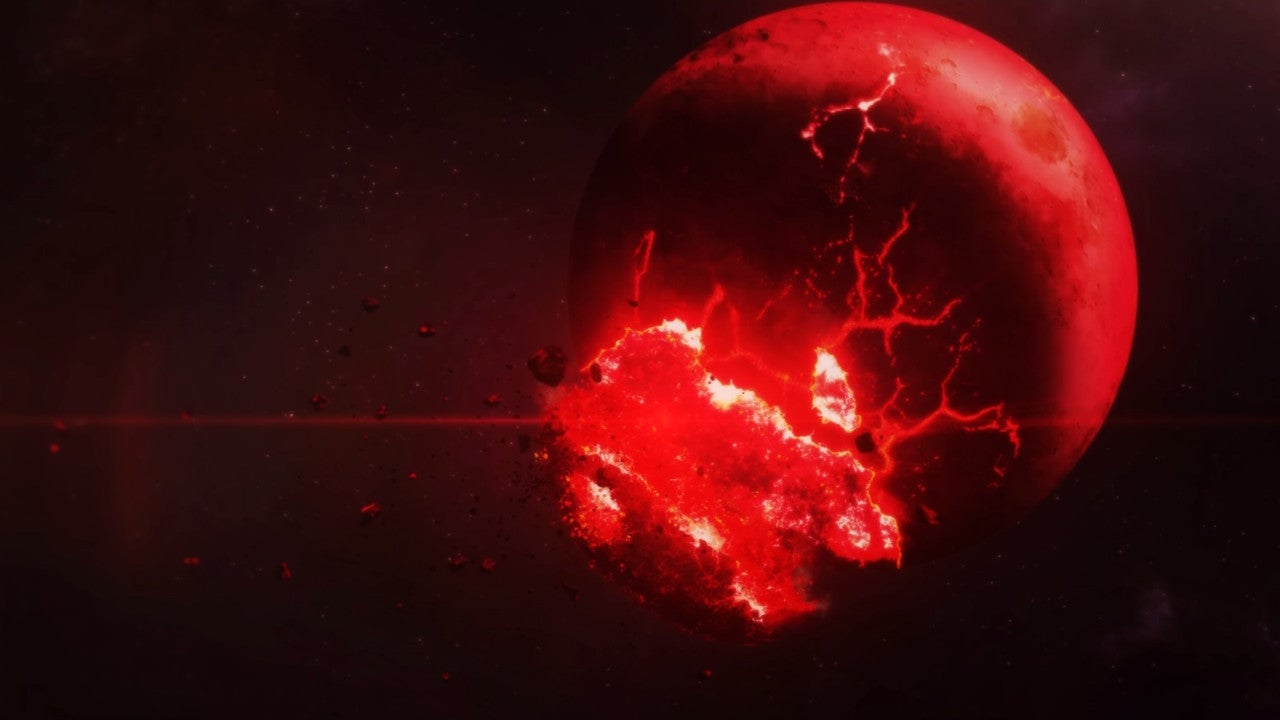 WHAT AM I FIGHTING FOOOOOR?

Endless cutscenes and dialogue, repetitive fights, whatever the story was.

In reality, after a certain point, Daemon X Machina shifts to a formula that is at once comically predictable and frustratingly oblique: You have a standard mission to destroy rogue AI machines. At some point, you and your mercenary allies are shocked — every time! — to find that another group of Orbital mercenaries has a mission that directly opposes yours. Again and again and again.

The game goes so far out of its way to tease its secret sci-fi plot that it never actually gets far enough into what’s actually happening to stay interesting. What are the Immortals really? What is each mercenary group’s aim? Which political consortium is doing what?

Instead of getting a sufficient explanation for this, you spend rank after rank of the game getting an agonising drip feed of troped-up anime quotes and characters who someone desperately tried to make mysterious but just come off corny and poorly written. “I know a thing,” they essentially say, “but I cannot tell you the thing yet. Just watch your back, Rookie.” 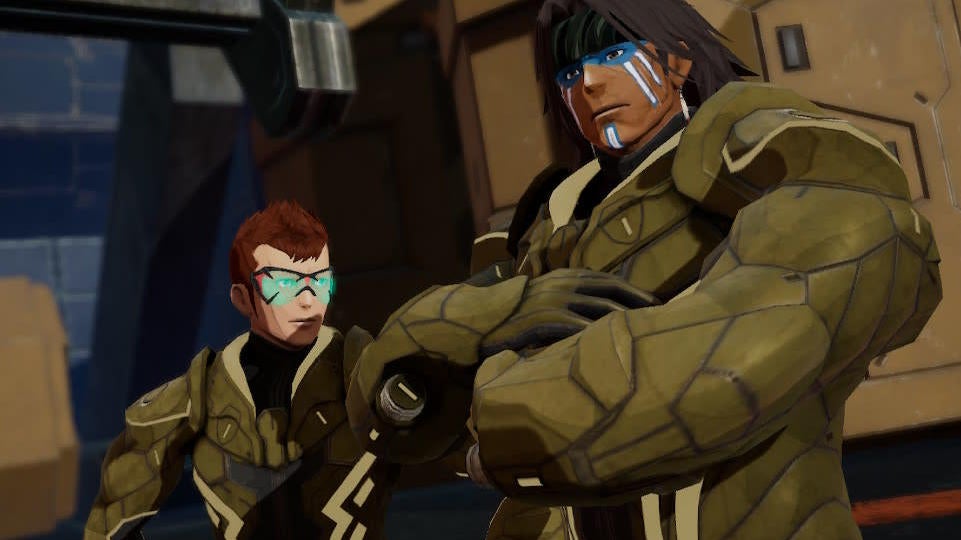 There are sincerely dozens of cutscenes and chats and mid-mission dialogue options about reasons to fight. For some of them, it’s money, which in this game means several “they better pay more for this” jokes that quickly stop being funny. There are also several pilots who tell you, “Just don’t get in my way,” or some variation thereof.

Supplementing mid-battle chatter are between-mission messages from outside characters and groups, which are intended to worldbuild and provide background but are so poorly written they just come off silly. Each political consortium ends up sounding like an overwrought supervillain stroking a cat, making it difficult to distinguish them.

“While this situation has been entrusted to Orbital, we believe it will be difficult for them to address it through the… proper means,” writes consortium Horizon, and I couldn’t help wondering why this message was even being sent to my character in the first place. Is this a mass email? Will I die in seven days if I don’t forward it? There’s a certain level at which the weird, stilted nature of communicating with Four and these consortiums seems intentional, but I just ended up frustrated with the game’s forced sense of mystique. 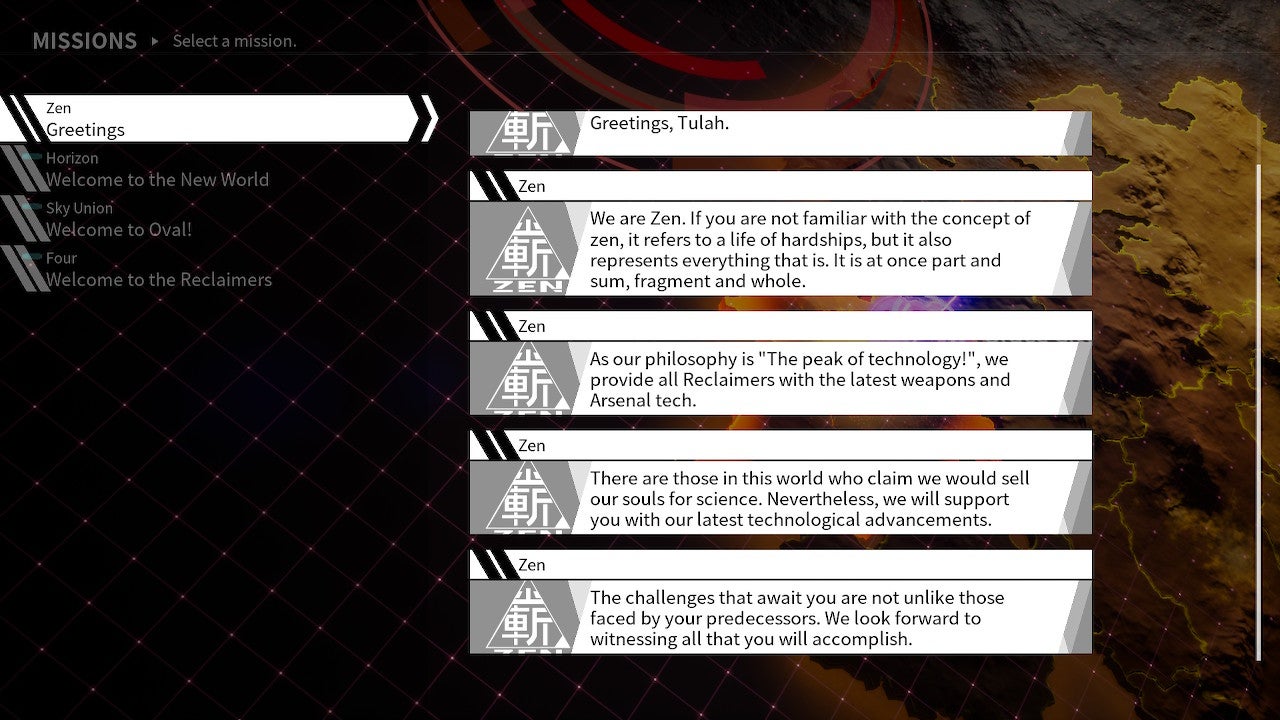 By the time you finally get the scent of some plot advancement at the end of your C-rank missions (you start at E), the game has tangled itself in confusing situations with characters you don’t have context to care about as they act on motivations and feelings that are hinted at but don’t actually seem to exist in any meaningful way.

That confusion continues through to the end of the game, where the exposition dumping continues to ramp up. As the story unfolds, some compelling ideas about artificial intelligence and narrative twists actually emerge, but they’re both sparse and tardy. There could have been a genuinely interesting story here, had it been told with more care. 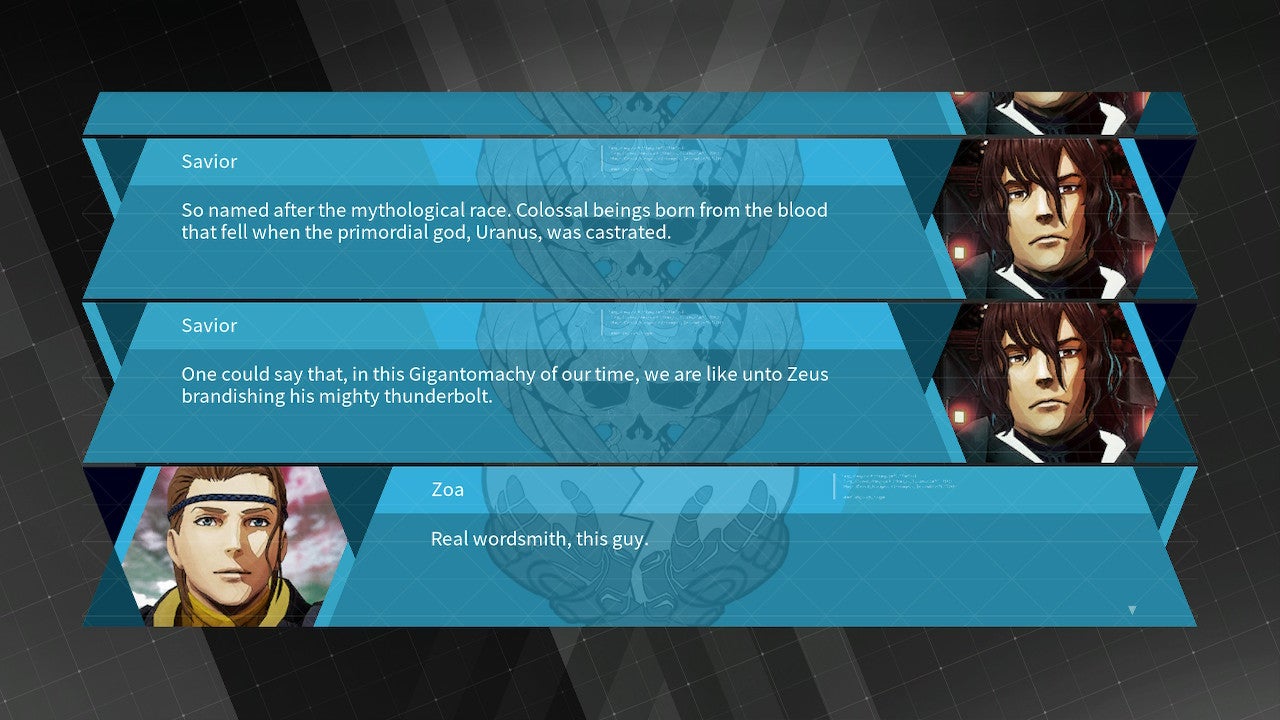 The gameplay, unfortunately, is hurt by the same tendency toward excess that wrecks Daemon X Machina’s story. A lot of what I was able to do with my mech felt superfluous. There are different configurations you can use, like an offensive option or a speedier option, each with lowered defence, and you also have the ability to make a “Mirage,” a clone of yourself that draws enemies in and fights alongside you.

These options can be helpful, particularly the Mirage, but they feel jammed into a game that already has a lot of stuff you can play with. There are also moments where you have to pilot equipment that’s not your own, including a gigantic Immortal that would be cool if it weren’t slow with limited tools. It sort of feels like a “this is the mech game you could be stuck with” moment, but it lasts for way too long.

Between fights, you can use equipment you’ve looted on missions to customise your Arsenal. You can also buy equipment or trade in parts to have new armour and weapons developed, as well as adding attachment to these parts, like increased ammo power or lowered memory usage.

There are a lot of ways to customise both your Arsenal and the parts that make it up, but the gear you collect is unexciting and doesn’t feel worthwhile to min-max. On top of that, I found myself more than once wondering why I couldn’t just have certain abilities I could find or enhance. 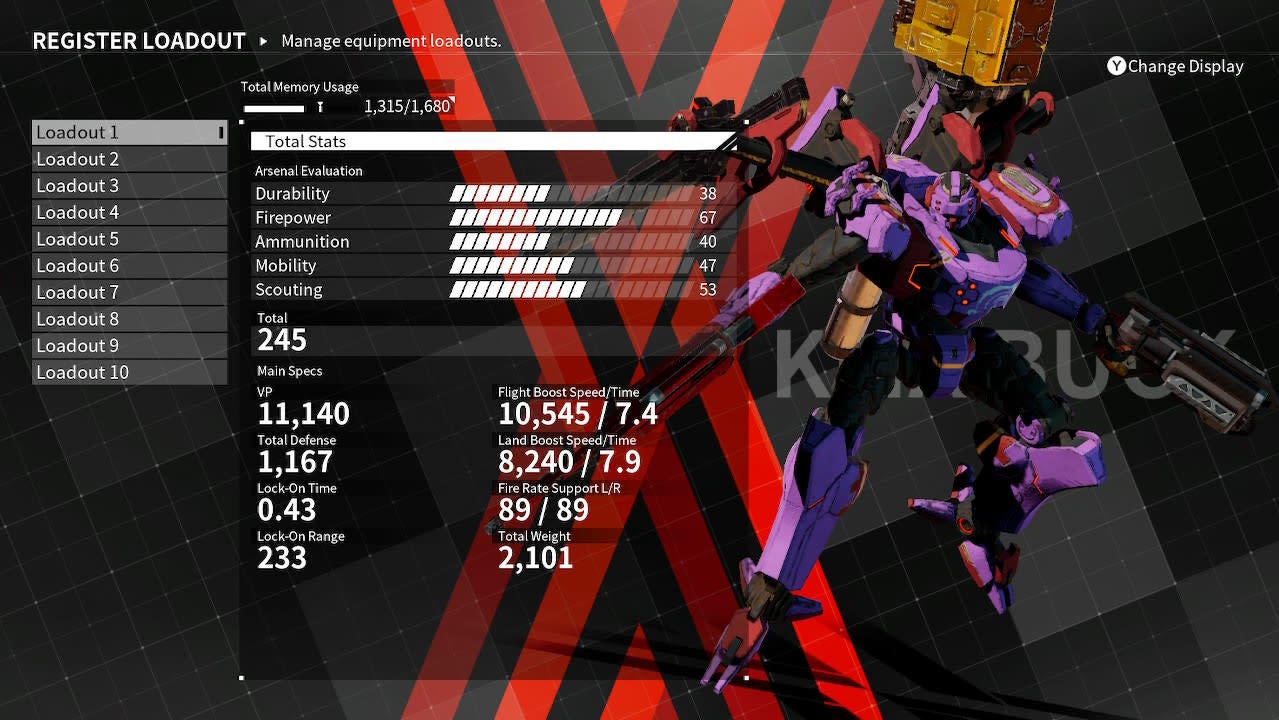 Another feat: making a JRPG lover ignore the numbers.

For example, I could deal with the fact that I essentially had to be on top of enemies to aim at them at first, but having to use an equipment slot for a downward boost was irksome. The only other way to descend without it was to just slowly fall from the sky.

I started to feel like a hoarder as a bunch of barely distinguishable parts piled up in my Arsenal’s arsenal, scarcely making enough of a difference for the mixing and matching to go as deep as all the in-game stats imply. I didn’t get excited about new decals or paint options, either, though at least there’s a hotdog decal. I’m never in life going to put that shit on my actual mech, but I’m tickled and happy that it exists.

You can also customise your pilot, or Outer, who can actually run around outside of a mech on the battlefield. It’s rarely fun to run around on foot, though you can eventually gain a skill to repair your mech. There are also some missions that require you to run around without your mech, like one where you have to stealthily steal an Arsenal and escape. They’re fine. They don’t feel totally broken and out of place, but they also aren’t a real highlight. 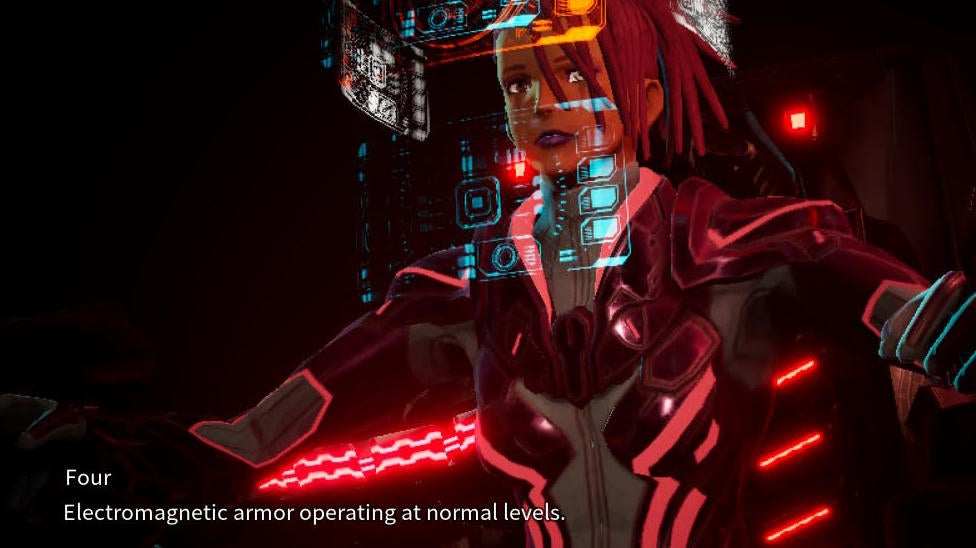 Tulah, my adorable, mostly silent protagonist (she grunts sometimes). I appreciated the black hair options in the game.

These issues are less pronounced in co-op, which has its own set of missions you can play with up to three other players. These missions consist of fighting versions of bosses you encounter in the main campaign, from gigantic mechs to other Arsenals. It was fun and challenging, and I could easily see multiplayer being the real draw of the game, though the limited number of missions could get old fast.

I’m not sure the game is complex enough for strategy to figure much into the co-op gameplay, but it could be fun to team with friends to fire bullets and acid and lasers into a big ol’ mechanical monster.

I wanted to like Daemon X Machina, but as I played, I kept wondering how much more fun it might have been if the developers had zeroed in on some of the more enjoyable elements instead of providing so many customisation options and wrapping everything in such a convoluted story.

There are some genuine bright spots in the gameplay and even some enjoyably ridiculous characters, but there’s honestly just too much of… everything. It should be a good problem to have, but in a world that’s changing for good, Marvellous never truly figured out what they were fighting for.