Paranoia is the ultimate backstabbing tabletop role-playing game. Created in 1984 by Greg Costikyan, Dan Gelber, and Eric Goldberg, the game is set in a dystopian future city ruled over by a computer AI and populated by horrible vat-born people all trying to betray one another for their own advancement. Paranoia: Happiness Is Mandatory, out now on the Epic Game Store, translates the every-clone-for-themselves atmosphere into computer RPG form much better than I imagined it would.

In Paranoia, available now for PC and coming to consoles in 202, players are troubleshooters, so named because their primary purpose is to find trouble and shoot it. Troubleshooters are given tasks by Friend Computer, benevolent-ish overseer of a domed city called Alpha Complex. Some tasks are routine, like heading down to a sub-basement and figuring out why R&D’s latest cleaning bot is malfunctioning. Missions could involve questioning murder suspects, testing new inventions, or any number of chores well-suited to a group of disposable workers. Humans in Alpha Complex are clones, after all, with five backups waiting in the wings should one prove to be a mutant or traitor or secret society member.

The joy of the Paranoia setting is that everyone is a mutant, possessing some sort of strange, superhuman power. Everyone belongs to some sort of secret society. Everyone is a traitor, and everyone else is looking to figure out what sort of traitor their teammates are in order to report them and possibly advance up Alpha Complex’s colour-coded ranks. Complicating this, you can switch between your own character and the teammates you choose during missions to strategically control their actions. 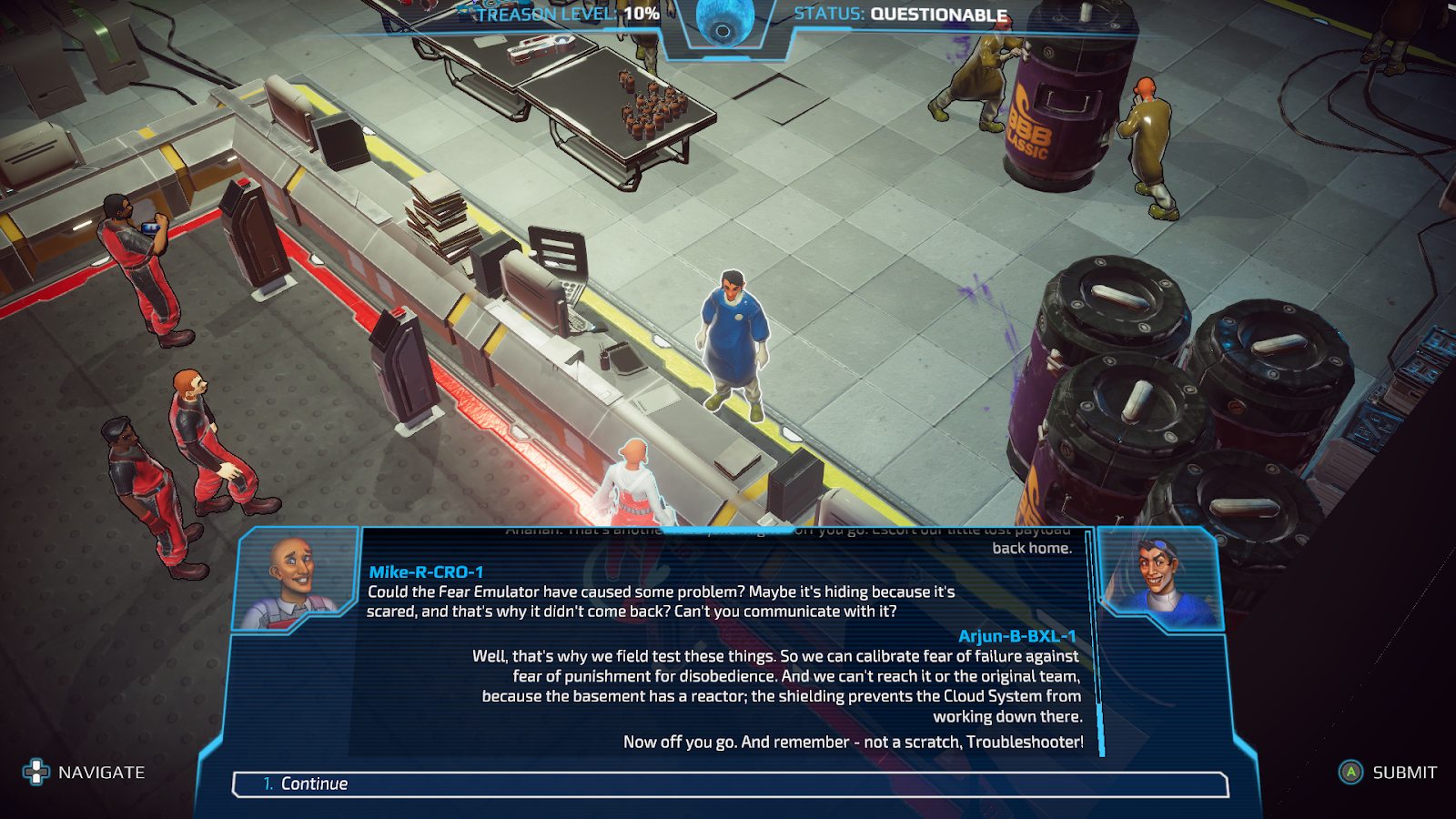 At the top of the screenshot above, you can see my treason level, 10 per cent. I accidentally earned those 10 points for stepping into a Yellow clearance area with my Red clearance character. Clearance levels in Paranoia start with Red and then advance up the rainbow—Orange, Yellow, Green, Blue, Indigo, Violet. There’s an Ultraviolet level as well, but chances of my traitor arse getting there are slim with the rest of my squad reporting every transgression I make to Friend Computer.

Take my team’s very first mission. R&D’s new cleaning robot, codenamed “Payload,” had broken down in a sub-basement, and we were tasked with figuring out why. It turns out the sub-basement is filled with turrets and laser-firing robots that have gone haywire, attempting to kill any clones who get too close. Payload, outfitted with an experimental device that allows it to feel fear (oh god why) was too terrified to move on, so our team had to escort the bot through the level, clearing threats as we went. 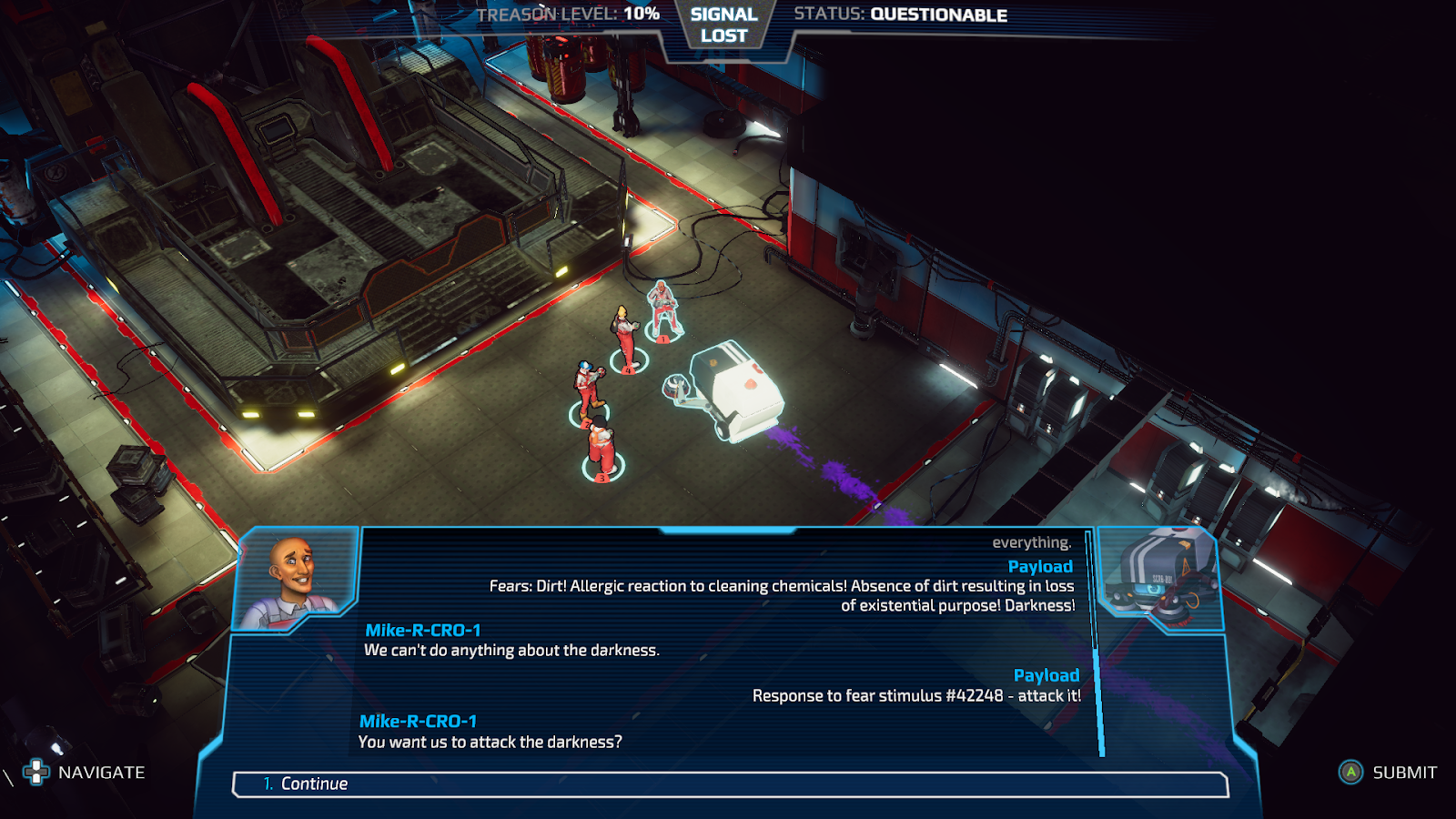 The writing in Paranoia: Happiness Is Mandatory is very good, filled with little jokes, side conversations between team members and the odd video game reference (one deceased member of Payload’s original escort team is named Trace-R-06). There was a neat little interaction between my character and our hygiene officer, in which I cracked a joke about the remains of the previous team he found to be in poor taste. Boo-hoo. Later my team encountered a door we could only open via hacking, a treasonous offence. My character shared a tense moment with the team’s tech officer, who warned she might turn me in if I proceeded.

All of these little interactions during missions keep the game exciting, which is great, because the combat portions of the game are not. Characters automatically attack when threats are in range, firing off lasers until enemies fall. There’s a cover system of sorts, where I can move the characters behind boxes and they seem to get hit less. I have the option to pause the action at any time and issue commands turn-based style, but I haven’t really had to. Eventually my team gets Payload to its destination (with a couple of surprises I won’t spoil), and we head back topside to report to our Friend Computer. Check my treason level now. 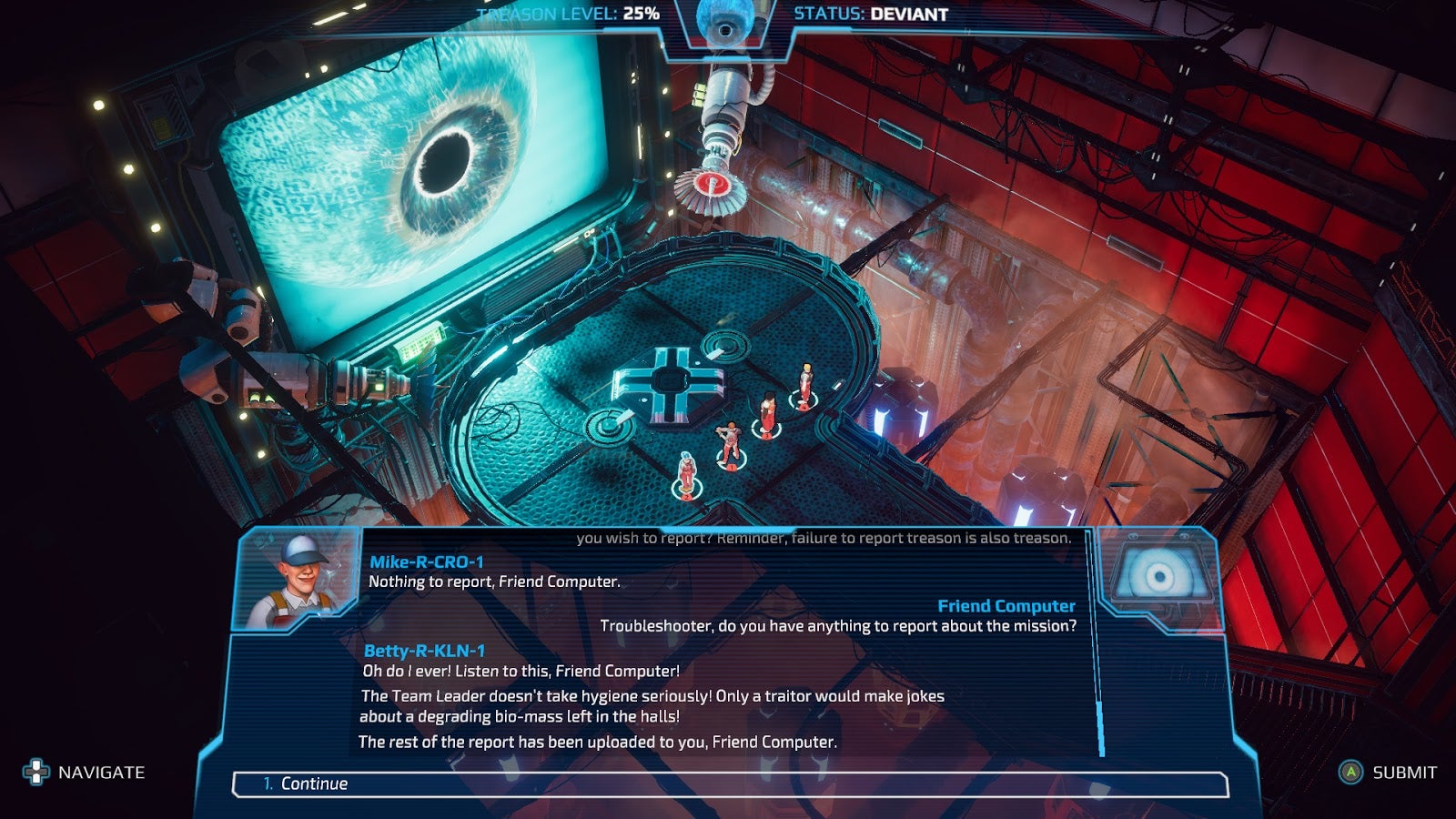 It’s 25 per cent. The hygiene officer reported me for making a joke about a corpse. Then the tech officer reported me for hacking. If I had not made the joke or had found some other way to hack—dammit, I should have switched to the tech officer, made her hack the doors, and reported her instead—maybe my standing with the computer would be better. Maybe my asking questions I was supposed to know the answer to in the next mission briefing and then trying to cover up my error by citing information I wasn’t supposed to have access to wouldn’t have raised my treason level to 50 per cent. 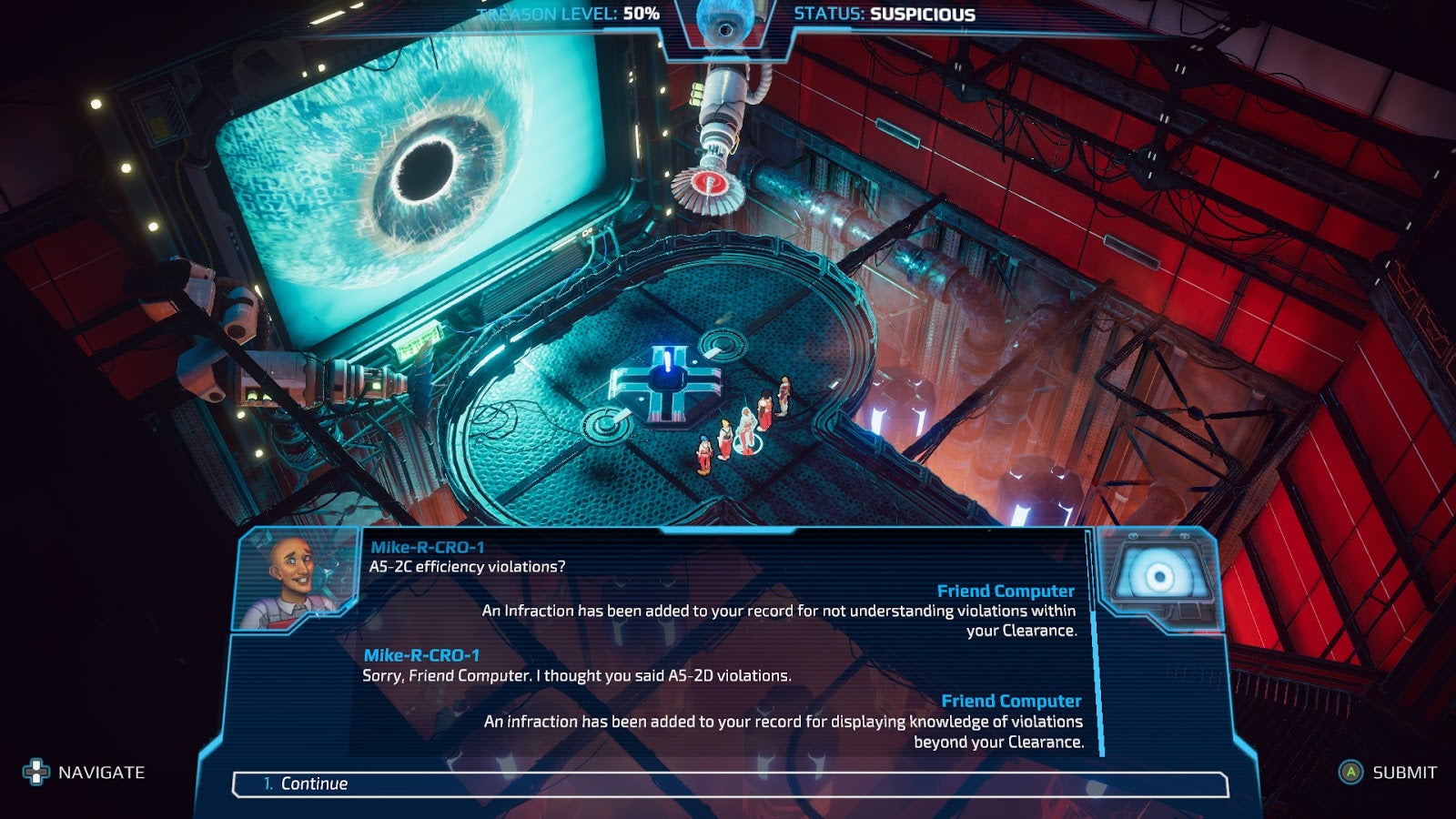 Or maybe this is exactly how Paranoia should work. We grow (in vats), we learn, we become traitors, we’re terminated, and our clones take our place, hopefully a little wiser for the experience. Now that I know how the game is played, the hygiene and tech officers are going down.

Playing Paranoia: Happiness Is Mandatory isn’t exactly like playing a session of the tabletop game. Playing with real people in a real place, we’d be lucky if we made it halfway through that first mission with half the team alive. Live-action Paranoia is about needling teammates until they crack, tricking them into revealing traitorous knowledge, slipping them items beyond their clearance and waiting for them to pull them out of their pockets. Paranoia: Happiness Is Mandatory is a much slower-paced, more relaxing way to prove your friends are all mutant traitors who should be terminated at Friend Computer’s earliest convenience.