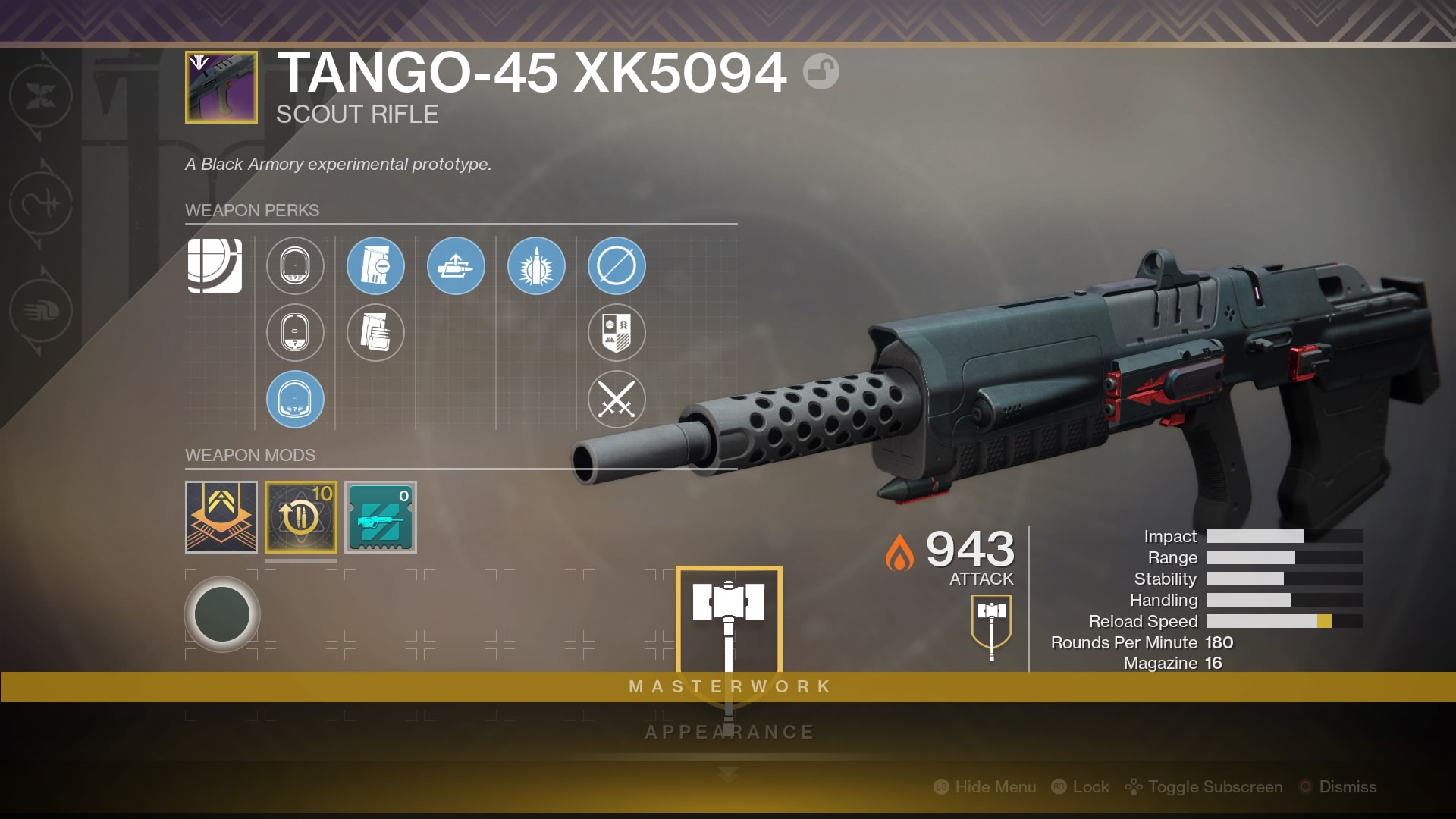 Behold my Tango-45 XK5094, a completely mediocre Destiny 2 gun that I’ve finally decided to embrace after weeks of keeping it at a distance because life is too short to keep holding out for the perfect weapon.

Last night I finally decided to upgrade it to a masterwork, something I haven’t done since the game’s new masterwork system was introduced back in 2018’s Forsaken expansion. I’ve been making my way back through the Black Armory missions that I mostly skipped when they came out because of the tedious grind associated with them. My reward was the Tango, a sleek black solar scout rifle that is by all accounts nothing special. Scout rifles have been out of favour for some time in Destiny 2, and Tango definitely doesn’t even make the top five. Mine version doesn’t even have the best perks like Outlaw, Rampage, or Moving Target, and its masterwork stat is reload speed.

But I’ve been having a lot of fun with the precision frame gun. It’s snappy, my Explosive Payload perk delivers a satisfying whack to weak enemies, and the SUROS projection sight is sleek as hell. I’ve also had a bunch of Enhancement Cores burning a hole in my Guardian’s pockets. Masterworking weapons is an arduous process that reveals some of Destiny 2‘s worst strains of tedium. Getting a weapon to level five is relatively painless, but the cost-curve skyrockets from there. 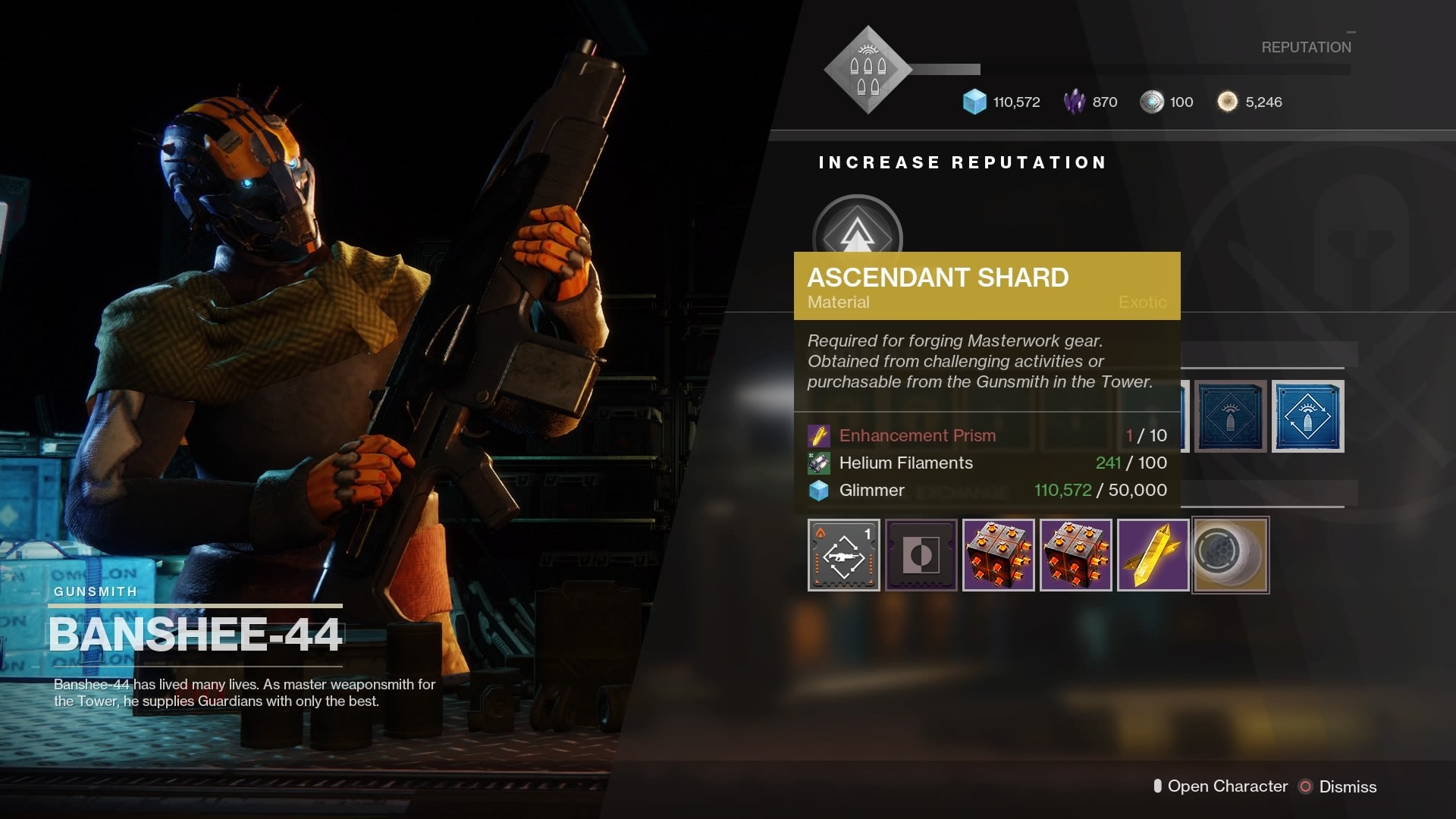 Completing the final step in masterworking a piece of gear requires one Ascendant Shard, which requires 10 Enhancement Prisms, each of which require 75 Enhancement Cores to craft. But after months of grinding Gunsmith bounties, it felt like it was time to spend some of what I’d worked so hard to earn. I realised that I was probably never going to have the perfect gear with the perfect rolls I’d spent the last couple of years holding out for. I’m now on my way to masterworking my Go Figure pulse rifle, another beautiful mediocrity.

My vault is a graveyard of aspirations at this point, full of the guns I couldn’t make a final decision on. Was one of three god roll perks enough to make it worth keeping it around? Would the game’s meta change to make my particular version of a mid-tier hand cannon like Crimil’s Dagger worth going all the way with for a PVP build? The answer to all of these questions and more was always going to be no, but the specter of counterfactuals and dueling Reddit threads always gave me enough doubt to stick to a “wait and see” approach. Now it’s 2020 and my vault has 500 items in it and pretty much all of them are trash.

Some of them are good enough, however. Some of them, like Tango, have actually helped me have more fun in the game, not just because they look cool and handle to my personal liking, but also because they’ve given me a new outlet for upgrading and customising my Guardian’s load-out. Destiny 2 can be a brutal death march, especially when playing mostly alone, and especially when your character always feels like they’re in between builds. It’s harder to invest in the grind and the world when all of your gear feels like it’s somewhere between a prototype and a hand-me-down. 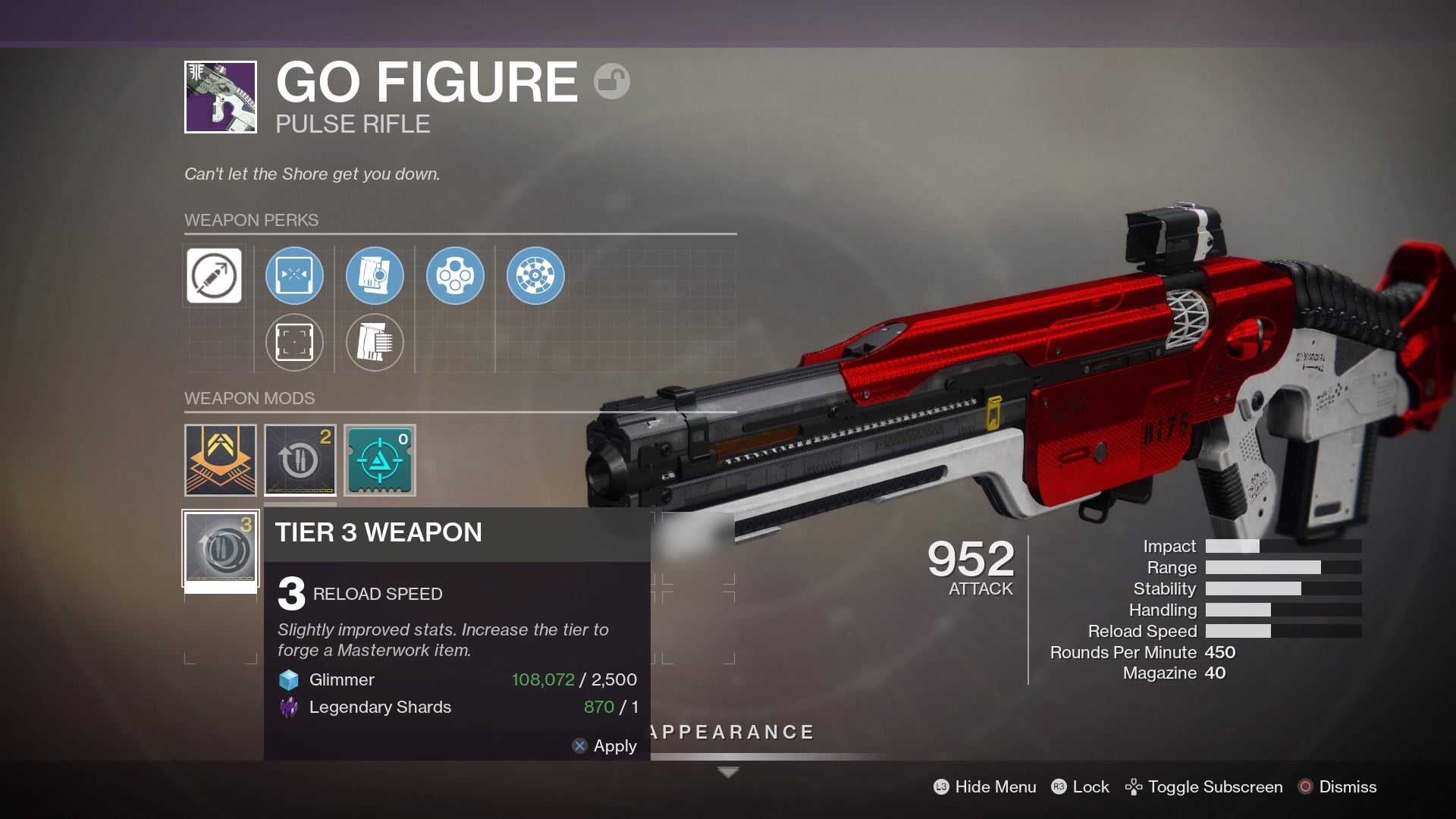 My Destiny 2 character is not unlike my home office. I’ve spent the greater part of two years slowly trying to remodel it: patching plaster, putting on fresh coats of paint, and adding new shelves and furniture. But every step in the process required me to make a decision and commit to one way things would be, foreclosing on the myriad of other possibilities bouncing around in my imagination. Months would go by as I compared budget TVs, radiator spray paint colours, and how many shelves to put on the wall. Should I stain and urethane my desk, or Shellac it instead, or simply oil the natural wood? Everything felt like it was riding on these granular differences, as if the games I played on my PC would be less fun if the colour and finish of the desk it was on wasn’t perfect.

For a long time I’ve been hounded by a similar nagging feeling in Destiny 2. Once I get the perfect Bygone, finally finish that Recluse quest for Crucible, or earn enough Bright Dust to get the new Dawning armour ornaments, then and only then will my Guardian be ready for me to really have fun in Destiny 2. At least that’s how I used to think. But I’ve spent too much time with this game to think like that any longer, and my refurbished Black Armory shaded Tango, for better or worse, is the first step in a new direction. I’m finally going to start playing the game like it’s an actual game and not a retirement savings plan for a dream house.