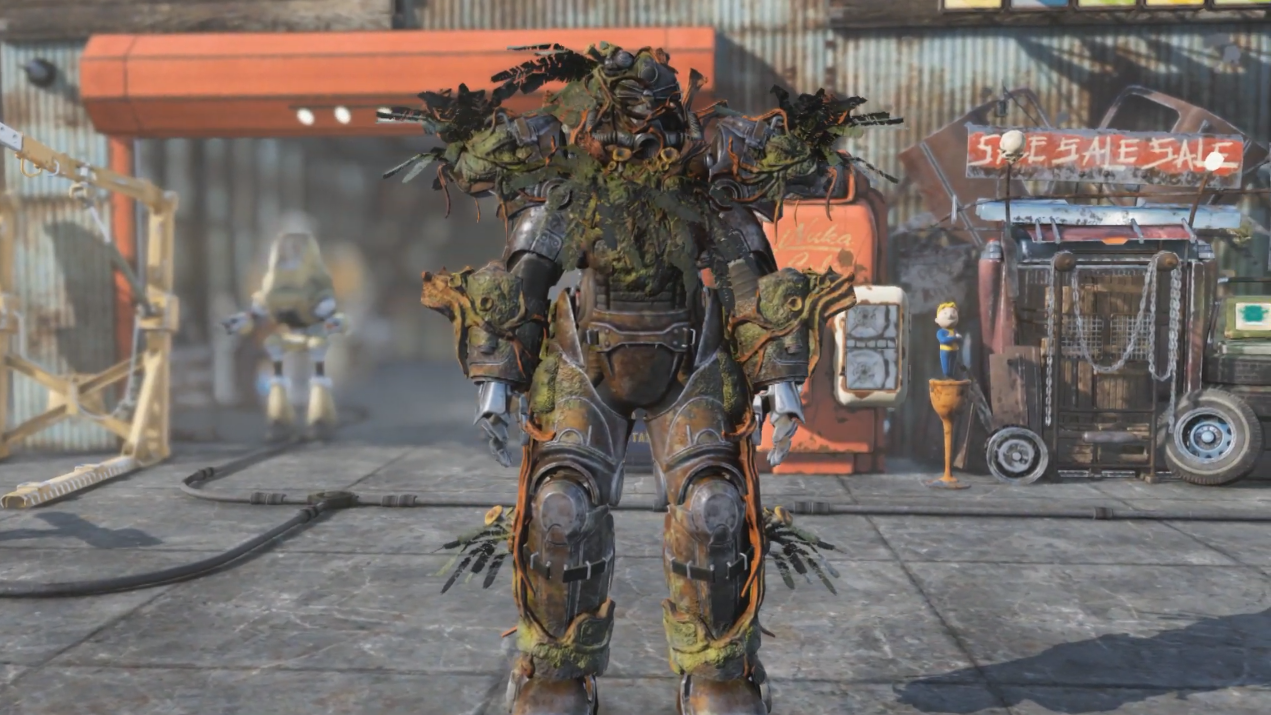 Screenshot: Vault Samurai, <a href="https://www.youtube.com/watch?v=OoyjWnEWatY">YouTube</a>
To sign up for our daily newsletter covering the latest news, features and reviews, head HERE. For a running feed of all our stories, follow us on Twitter HERE. Or you can bookmark the Kotaku Australia homepage to visit whenever you need a news fix.

Fallout 76’s Strangler Heart Power Armour is very strong and it’s supposed to be incredibly hard to get, but thanks to the game’s latest duplication exploit, more players than ever are running around in it.

While Fallout 76 has been plagued by duplication glitches of one sort or another for most of its existence, the latest one revolves around trading sets of Strangler Heart Power Armour, a reward for completing the game’s arduous Vault 94 raids that was meant to be one of a kind. Unlike other items in the game, the Strangler Power Armour can only be crafted from plans dropped in the raid. The plans can’t be traded, either. Don’t do the raids, don’t get the power armour. Except that now thanks to a new exploit, the rare gear is easier than ever to acquire.

Pulling off the exploit requires two players. The first drops their Strangler Power Armour so the second player can hop into it and claim it as their own. Then they immediately crash the server so that when they log back on, the game thinks they both own a set. Crashing the server on command might seem hard, but thanks to a building glitch that lets players stack as many metal walls on top of one another as they like, it’s actually quite easy. As a result, the game’s subreddit is currently full of reports from players across PS4 and Xbox One complaining about both unstable servers and an abundance of Strangler Power Armour.

Sites like eBay and other blackmarket hotbeds for trading in-game loot are currently full of listings for the gear, with prices dropping as low as $US10 ($15) in some cases. It’s understandable why people might be willing to fork over the equivalent of one of Fallout 76’s microtransactions for the set, since it’s so hard to get it the standard way. In addition to needing to collect all the crafting plans for the Strangler Power Armour, players also have to collect enough Vault 94 steel to actually make it, requiring dozens of hours stuck carrying out the same tedious raid missions over and over.

The latest exploit has renewed a debate within the game’s community about whether rampant duping would be less of an issue if end-game items were easier to get and, in some cases, less dependent on luck. Other players are worried that the proliferation of Strangler sets, arguably the best Power Armour in the game, might lead Bethesda to nerf it in some way as it did with explosive weapons during last year’s major duping crisis. However Bethesda ends up addressing the issue, either by somehow deleting all of the elicit Strangler sets or replacing it with some new, more coveted end-game gear, players are desperate for a fix sooner than later.

Bethesda hasn’t announced whether it’s officially investigating the latest round of duping and did not immediately respond to a request for comment. Meanwhile, some players report that server crashes are being compounded by additional lag thanks to all of the new Strangler Power Armour players are currently wearing. The gear adds acid damage to players’ attacks as well as any enemies that hit them, effects that have always strained the game but are even worse when multiplied by more people. As a result, some people have committed to only running big events like the Scorched Beast Queen fight on private servers until the issue is fixed.