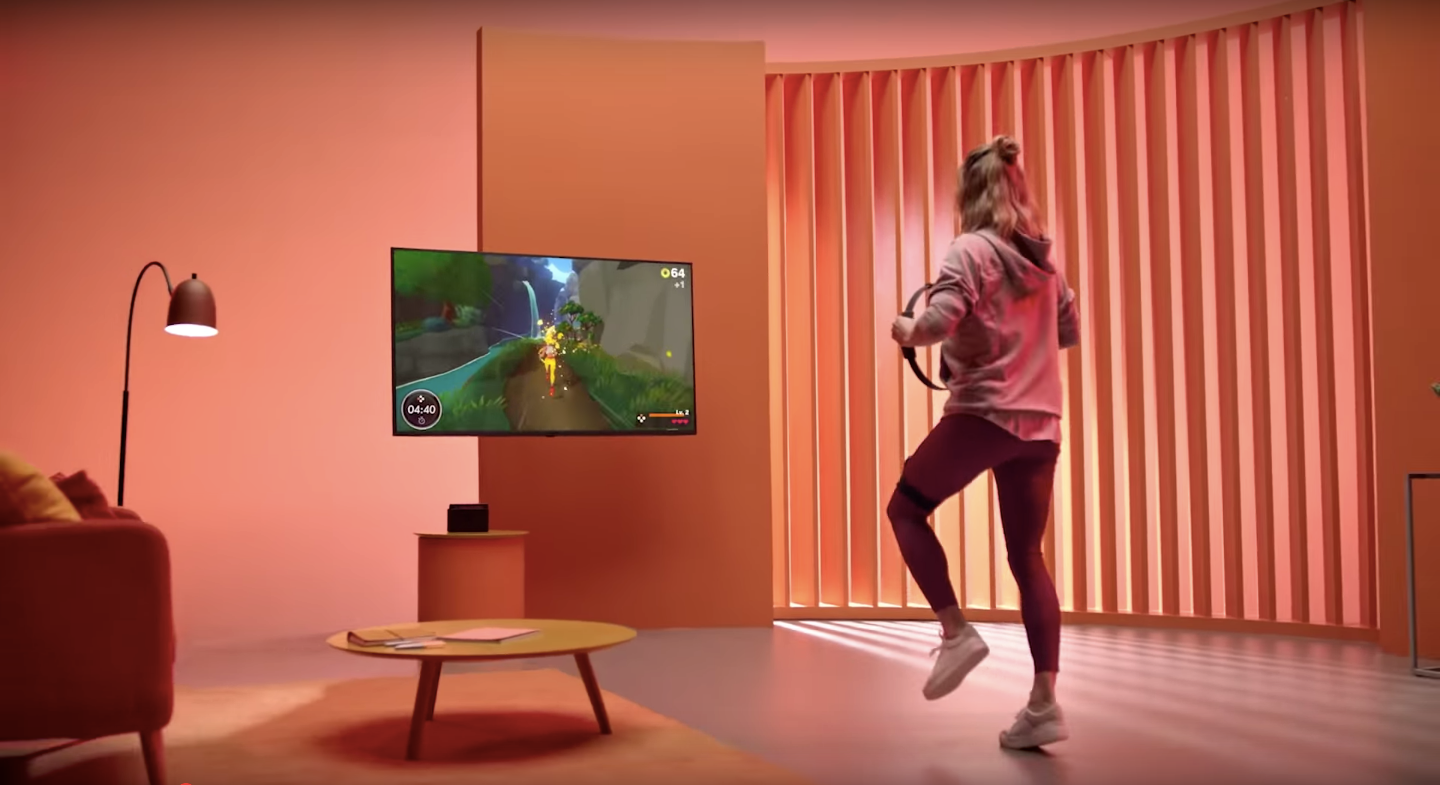 Like most people, I haven’t been moving around much these days. Aside from a daily walk, I only use my body to move around the tight circuit of my house: desk, sofa, microwave, bed. My fingers see the most action. I type emails to friends I haven’t spoken to in years and wash my hands over and over until the skin cracks.

The only exception is when I play Ring Fit Adventure. For thirty or forty-five minutes every other day, I blast through a series of squats, yoga poses, and ab twists while a sentient ring shouts encouragement. Sometimes I battle a weirdly sexy dragon who’s wearing a singlet. Sometimes I do a series of challenges, like using my hips to shape the clay on a pottery wheel or squeezing my arms to open and close a parachute. Sometimes I just run through sunlit fields. While I’m playing, my life is loud, colourful, positive, and entirely within my control. It’s everything that the rest of my life—that is, life during covid-19 self-isolation—is not.

I’ve had Ring Fit Adventure since January, when I had only a vague understanding of the coronavirus. New York City was so cold that I didn’t want to go anywhere, least of all the gym, so I picked up the game as a way to beat the winter doldrums. I liked it immediately, but my relationship with Ring Fit Adventure changed as soon as people around me started to get sick. As social distancing went from buzzword to official law, the game, which had sold out repeatedly since it came out in October, sold out again. This time, price gougers were selling the game and its exercise ring and leg band peripherals for more than triple the retail price. I’m nowhere close to a fitness buff, but as I fought Dragaux over and over in my living room, I felt lucky. Not only could I exercise, but exercise made me happy.

I reached out to a few other Ring Fit Adventure fans who had started playing before the pandemic to see if they also felt differently about the game now. All three of them said yes. “It’s one of the few things in my old schedule that stayed the same, even in quarantine,” said Katya Granger, an assistant warehouse manager and freelance artist who lives in Park Ridge, Illinois. “Before, I’d go to work, come back, and have dinner. Around seven, I’d play Ring Fit Adventure and post about it online.” (Granger often draws comics based on the game.)

Then, two weeks ago, her job went remote. “Everyone’s at home. We’re not shipping anything out,” she said. But Granger still plays at seven in the evening, which gives her a sense of normalcy.

Some more Ring Fit Adventure auto bio comics while I'm away! The game is incredibly patient about the time it takes for you to do each rep and I am thankful pic.twitter.com/TN48VBK9ni

Derrick Fields, an artist and game developer who lives in Chicago, has always worked from home. He used to have the apartment to himself, but now his wife also works from home, and his stepson attends virtual classes. Before the virus hit, Ring Fit Adventure was a solo morning endeavour for Fields. He would wake up, put on water to make coffee, and play Ring Fit Adventure while the water was heating up. These days, his eleven-year-old stepson plays right after he does. “He saw me playing and got into it pretty immediately,” Fields said. His stepson has been getting used to the strangeness of staying home all day, so playing Ring Fit Adventure at the same time every day has been “a great way to make home not feel so foreign when you should be sitting in a classroom,” Fields added.

For Becca Hallstedt, an artist at Wild Blue Studios, Ring Fit Adventure has been key to both their physical and mental health since they started playing the game in mid-January. “I’m the type of person that doesn’t know my limits,” they said. “If I swim twenty laps, I will swim my arse off and then I will get out of the pool and throw up because I just don’t know when to stop.” Hallstedt liked Ring Fit Adventure right from the start because it reminded them to stop, breathe, and drink water. Today, the game “feels more like a mental health tool in a different way than it did before,” they said. “When everything feels like it’s falling apart, you have to find a way to channel that into something.” Ring Fit Adventure helps Hallstedt channel the nervous energy of living in a pandemic.

Two weeks ago, Hallstedt suffered a bulged disc, which restricts their motion and has thrown the game’s benefits into even sharper relief now that they’ve started playing again. One of the ways they remain connected to Ring Fit Adventure is through the game’s subreddit, which Hallstedt described as “extremely wholesome.” Most of the subreddit is devoted to advice and encouragement, which is a reflection of the game itself. Ring encourages the player to keep going at almost every point. “Ring himself is an unabashedly positive figure,” said Granger. Fields said the same. For him, Ring Fit Adventure is a way to get the day off to a cheerful, energetic start, especially since he only goes outside to walk his dog and get groceries.

Hallstedt said that staying positive is a challenge these days. They’re trying to stay informed, but being constantly bombarded by information about covid-19 can be panic-inducing. That’s one of the reasons they couldn’t wait to get back to Ring Fit Adventure. “It’s really refreshing and helps me avoid an intake of bad news,” they said.

I know what Hallstedt means. My body may be at rest most of the day, but my mind still moves at lightning speed. I scan the headlines multiple times a day, trying to digest the graphs, the anecdotes from medical workers, the press conferences. No one could keep up with this. And yet. After too much fruitless Twitter scrolling, it’s beyond comforting to know how I’m going to end the day. I’ll roll out my yoga mat in front of the TV, twist through a series of dynamic stretches, and then help Ring free the world from Dragaux’s sweaty, beefy clutches. My mind will no longer try to be everywhere at once; it will be here, inside this room, inside a body that is blessedly healthy. “Doesn’t it feel good to move your body?” Ring will chirp, and I’ll smile, because he’s right.