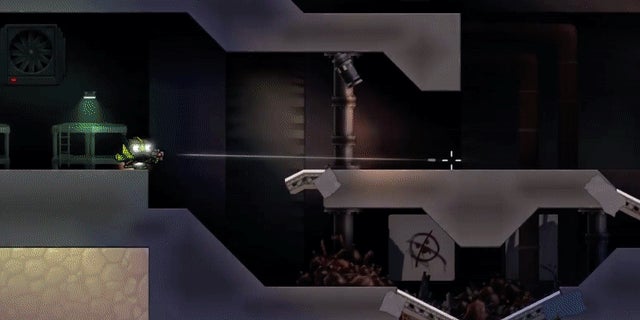 There's only one member of the enemy team left as I leap down to Cobalt WASD's bomb site. They open fire with their shotgun, but I activate my slow motion power before firing a teleporter round behind them. I zap past and rush with my spear, dispatching my foe with just enough time to defuse the bomb.

Cobalt WASD, out of early access this week, is a 2D multiplayer shooter developed by Oxeye Game Studio and published by Mojang. It drops two teams of robots against each other in Counter-Strike-esque matches. One team must try to plant a bomb, and the other team has to protect one of two locations. It's packed with wild weapons and upgrades that turn fights into intense displays of double jumps, rockets and gadgets.

Whereas 3D maps criss-cross and loop around to create massive arenas, Cobalt WASD's maps are multi-level floors with alternating open spaces and tighter paths funnelling teams towards each other. Those gunfights are pretty exciting thanks to a wide range of items you can purchase at the start of each round. There are your average rifles and pistols, but there are also jetpacks for soaring to great heights or a stealth upgrade for prowling around the map.

This is overwhelming at first. Knowing what loadout works best for you takes experimentation and more often than not just means you'll get your arse kicked by another player with dozens of hours under their belt. I saw this firsthand when a lone player took on my entire team and turned us to rusty scrap while teleporting around with practised precision.

But part of the fun of Cobalt WASD is knowing that you'll also get the chance to kick butt once you find your favourite abilities. I've lured enemies into small rooms that I quickly filled with Molotov fire and thrown cryogenic freezing grenades that left them open to a quick snipe from my teammates. When everything clicks, you feel like a goddamn genius. And sometimes, like in the clip below, all it takes is a big arse rocket launcher.

Cobalt WASD is occasionally frustrating when you're learning the ropes, and it can be a bit too chaotic for its own good, but it nevertheless manages to provide a neat little multiplayer experience. The community is friendly, and while it might take some time to get used to the zippy 2D battles, it's a great way to goof around.