game diarykotaku game diary
To sign up for our daily newsletter covering the latest news, features and reviews, head HERE. For a running feed of all our stories, follow us on Twitter HERE. Or you can bookmark the Kotaku Australia homepage to visit whenever you need a news fix.

In Frostpunk, a new snowy city-builder by This War of Mine studio 11 Bit that is out today, the player develops a city in a frozen wastelands.

You must fuel the churning generator at the heart of your town, feeding it enough coal to keep your people alive. The cold is your first and greatest foe, and it’s my favourite part of the game.

I love being cold. I’m obsessed with polar exploration and the frigid nothingness at the ends of the world. It’s a romantic notion, the privilege of someone who’s never really grappled with deadly cold, but I love how low temperatures make the things around me hard and present, let me know the limits of my skin.

My love of the cold comes from the years I spent living on a boat and working outdoors, when for a big chunk of the year being cold was something I just had to live with. I’d wake up with my sheets frozen to the wall, spend days bundled up as best I could against sleet and snow. I came to respect and ultimately love the effort it took to move my body through each frozen day, a determination summer doesn’t require.

Frostpunk Is A City-Builder Where You Can Eat The Dead

As a fan of any game with a temperature gauge, I've been excited about Frostpunk since the first snowy videos appeared. After playing a recent demo of the game's opening hours, Frostpunk seems like it's shaping up to be an interesting mix of city-building and survival.

Your little townspeople in Frostpunk don’t feel the same way. The cold makes them cranky, lowering the game’s hope and raising their discontent meters. Eventually the cold makes people sick, especially when the temperature drops drastically over the course of the game’s campaign.

Your city expands in circles around your central generator, and each building has a heat level that affects how it functions given how far from the generator it’s placed. Certain homes will be unliveable if placed too far away, or certain buildings can’t operate. You can research warmer houses, better workplace heaters, or how to expand your generator’s power, but these all cost resources I regularly lacked. The game’s thermal overlay lets you know how bad things are getting. 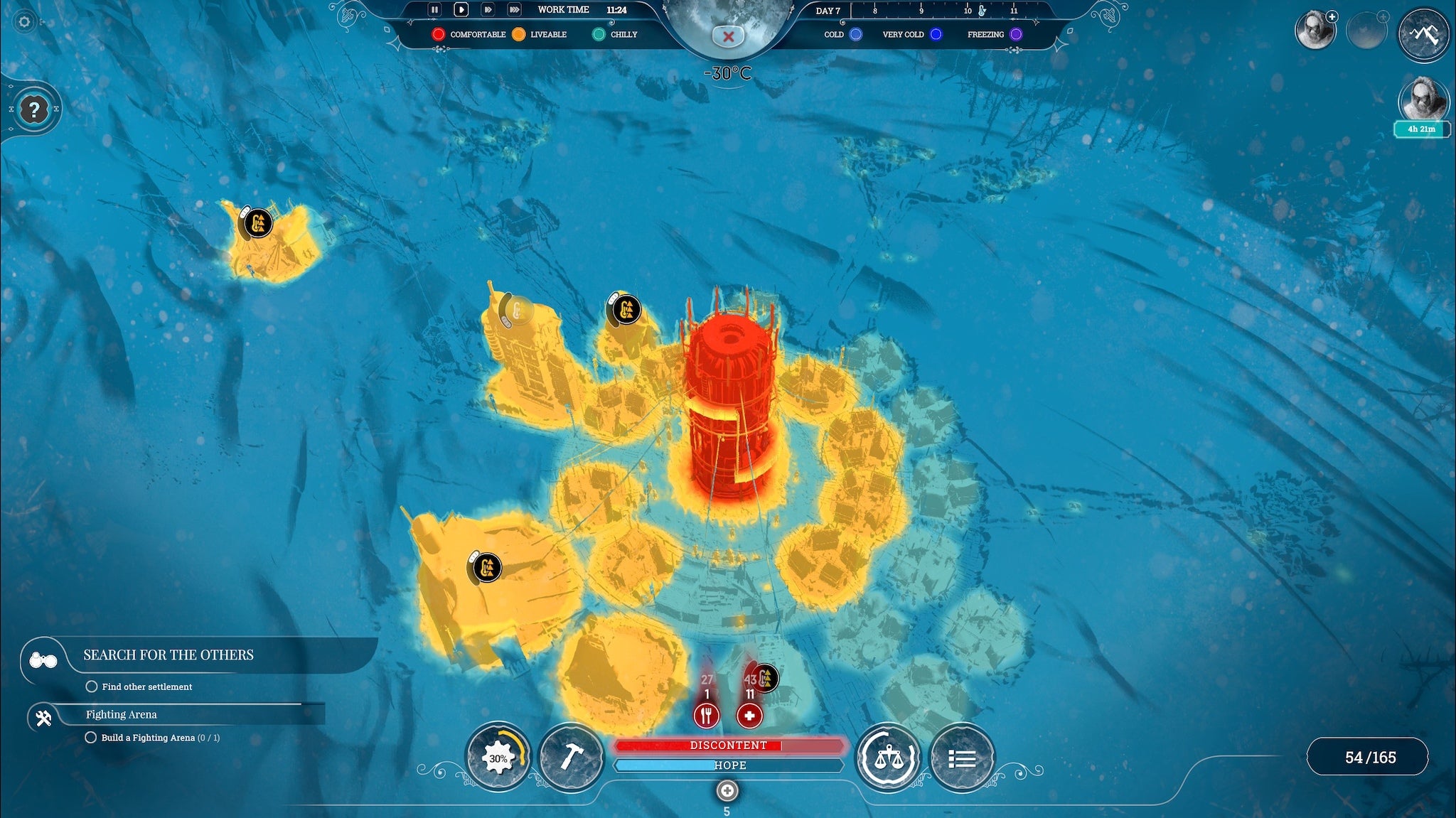 Frostpunk’s thermal map. Some buildings can be equipped with heaters that keep them warmer, but they cost coal.

I’ve been playing Frostpunk for a few days, starting cities, establishing laws and seeing how deep this so-called society survival sim gets.

While you can’t zoom into Frostpunk as much as I’d like, your buildings are full of excellent details of people desperate for warmth. Tiny fires burn amid clusters of tents, windows flicker with candlelight, and smoke rises from chimneys and drifts with the wind.

Your citizens struggle with the transformation of Earth into a snowy wasteland, and they cling to anything that reminds them of the old times. Fighting arenas and public houses raise their mood, and churches or police forces keep order, but nothing seems to be quite as bolstering – or as necessary – as having light and heat close at hand. 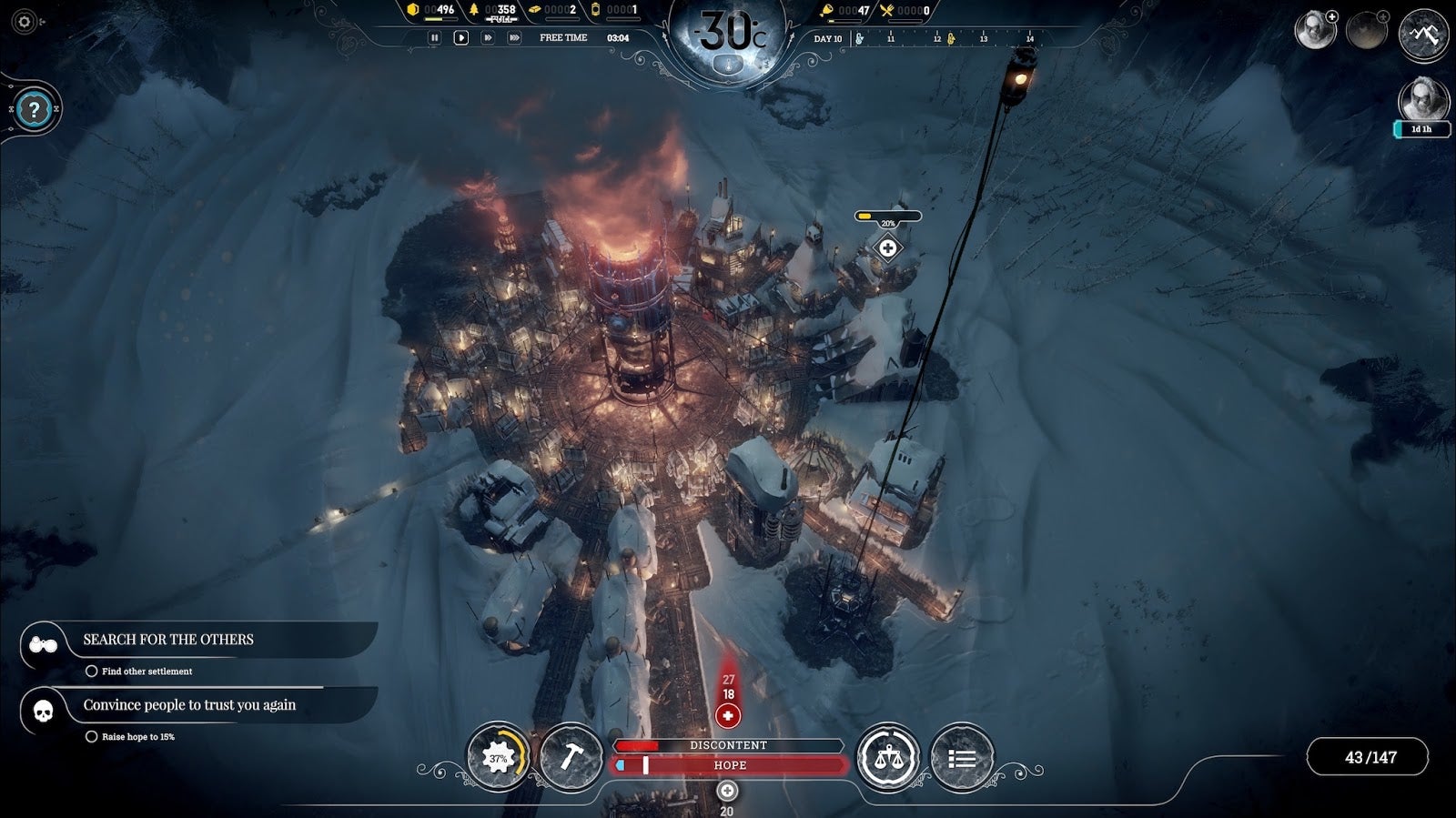 I love all the lights and fire.

More than the game’s details of warmth, I love the details of cold. I love the snow piled on roofs and streets, the paths my citizens tread each day to the sawmills and coal mines so far from the generator’s hum. I love the limits snow creates on the world, how desperately my town glows amid it.

This is a city-builder you’re meant to play more than once, crafting a town and a society in the hopes it won’t fail.

But failure does come.

The game’s regular cold spells have been run-ending disasters in my Frostpunk attempts, my screen going icy at the edges when I’m the least prepared. I despaired for my virtual city, but I enjoyed the crackling sound effects of ice forming. Cold is your enemy, but it’s also the element that makes the whole game exist. Its limits are the space within which your city and all the game’s tense possibilities thrive.

In one of my Frostpunk games, hope dipped too low and I couldn’t turn things around. I got deposed as leader and sent to die in the snow. Most citizens were impassive or glad to be rid of me, reflecting that at least I’d die quickly in the tundra.

After a game spent constantly falling behind, solving one problem only to cause another, a quiet death in the ice didn’t feel entirely like a failure. It seemed peaceful and a lovely, a fitting acknowledgement of my favourite part of the game.