At E3, SoulCalibur's Objectified Women Felt Like A Relic Of The Past 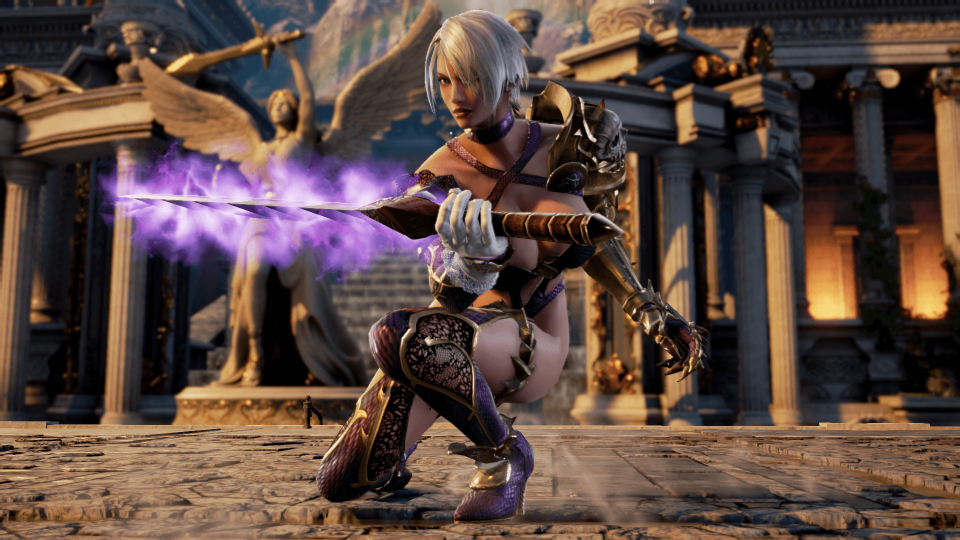 Ivy's over-the-top appearance may have fit in quite well with the boys' club mentality of the late 1990s when she was introduced in the first SoulCalibur. 20 years later, at an E3 with down-to-earth playable female protagonists in Assassin's Creed, Tomb Raider, The Division 2, The Last of Us Part 2, Battlefield 5, and other headlining games, Ivy in SoulCalibur 6 seemed a little out of place, buried deep within publisher Bandai Namco's booth at the back of the show floor.

It's not just her bandaid attire; it's that, by sticking to their guns (or, here, sword-whip), Bandai Namco has pigeonholed what could be a stellar fighting game for everyone. As a series, SoulCalibur almost didn't live to see a seventh iteration, said SoulCalibur producer Motohiro Okubo, speaking with Kotaku in a small interview room behind that booth.

"SoulCalibur actually was in a little bit of a crisis as a brand. The company climate wasn't really encouraging another instalment for the franchise," said Okubo.

The series may have been seriously wounded, but the soul still burns, for now, as SoulCalibur 6 will be released for PC, Xbox One and PS4 on October 19. This version, Okubo said, maxed out the volume on what makes SoulCalibur feel like SoulCalibur, which seems in part to be a doubling down on its playable seductresses.

In 2018, when so many mainstream games are casting a wide net across a redefined notion of what it means to be a "gamer," Ivy feels like a bit of a relic of a past's mainstream, like lead paint or cocaine for toothaches.

Last week, I met with Okubo to ask him a burning question I've had since I first laid hands on SoulCalibur 2 in 2003: Why do the series' women still look like sex dolls?

SoulCalibur 2's intro has stuck with me, a little bitterly, since I was an overcompetitive 12-year-old craving another game to dominate at. The fighter Taki, in a skin-tight red suit and no bra, would land on the ground, breasts jiggling everywhere. A moment later, the camera cut to Ivy, who dramatically shimmied her torso before extending her whip.

It was a sort of girl-on-girl action that, to me, felt explicitly designed for straight boys my age. As the camera angles changed, breasts were the first feature to appear. Sure, I didn't have to participate in everything.

But just from seeing the opening scene of this blockbuster fighting game — the moment when a game states its goals, makes its pitch, and reels in its audience — I knew that worming my way into the game's culture, battling other players and getting competitive would be harder for me, even though I loved the gameplay, the stages, the single-player mode.

SoulCalibur's pitch was a self-fulfilling prophecy. Unlike group-hangs when friends and I played Mario Party, Super Smash Bros., and even Burnout, SoulCalibur was a struggle to get in on. Boys I played with were significantly less likely to hand me a controller after a loss. Talking about SoulCalibur at school, these players would smirk at me when I'd weigh match-ups.

In the tyranny of kids, who uncritically absorb and perpetuate whatever rules or structures they see, I wasn't a part of SoulCalibur's target audience. Years later, at a liberal college, I remember following friends into a room where SoulCalibur 4 was being played on a television. I love this game, I said, to a group of new faces who didn't believe me. 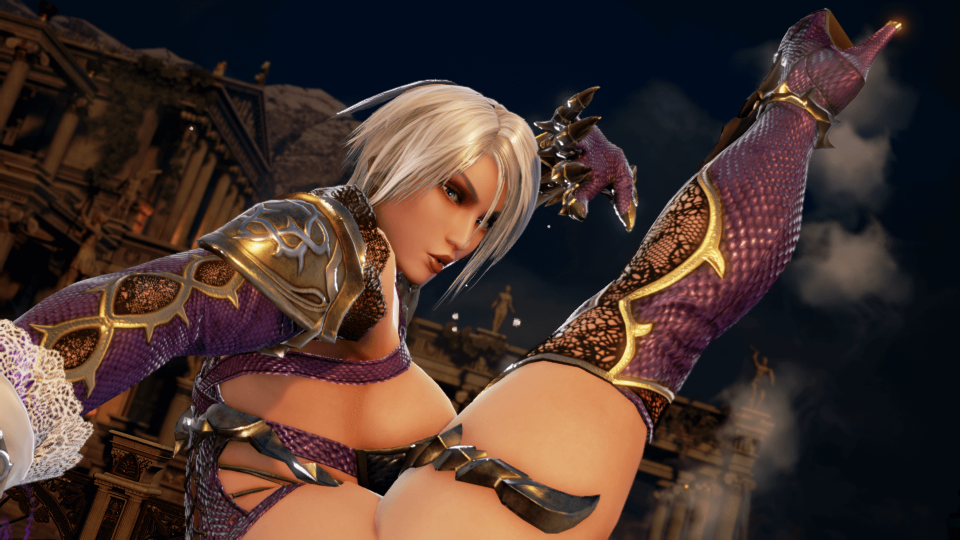 In my interview with Okubo, I felt that I'd been presented with a golden opportunity to hear the response to a question I'd had for 12 years, a question about why a game I've loved still feels so off-putting to play. "I've played SoulCalibur games, and I used to play a lot of Cassandra. I was playing Sophitia just now," I told Okubo after playing a few rounds of the upcoming game.

"I noticed that, in this version, her breasts are more prominent. You can see up her skirt. Ivy, still, is wearing not that many clothes. When I play a game like SoulCalibur, I feel like it's not for me. I feel like it's for men who might be interested in these characters. I've always sort of felt that about SoulCalibur. Is this something you consider?"

Here's what Okubo said: "Of course, I am a man, as well as many of the people on the development team. That's something that we should probably consider if that's the opinion of a female perspective like you in the future. We weren't necessarily going out to try and intentionally make something sexy for the purpose of being sexy." 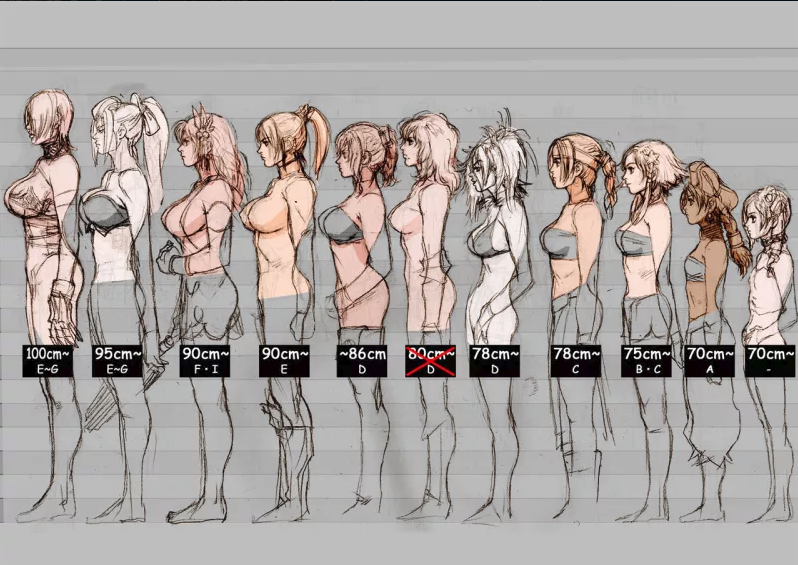 That's a little difficult to believe, I told him. In 2011, SoulCalibur 5 director Daishi Odashima circulated a SoulCalibur breast size and shape guideline on Twitter, which delineated the exact proportions developers went for when designing their femme fatales.

An ad for the game released in Japan cut out Ivy Valentine's face, instead displaying a gargantuan pair of meticulously-shaded breasts wrapped in a fur coat. Another zoomed in on her arse, naked except for a thong.

In past games in the series — and in SoulCalibur 6, too — the, fighters' clothes will fall off when they are damaged. This is a common feature in sexy anime games like Senran Kagura: Peach Beach Splash, High School DxD, Akiba's Trip: Undead &amp; Undressed. In Bandai Namco's presentation on SoulCalibur 6, a spokesperson emphasised the mechanic.

"Visually, we realised that the game has to be exciting for people playing, but also, spectators have to be excited as well, too. From round to round, if you continue to land these hits, characters' armours break, costumes change. You could be in your underwear by the end of a match."

"It's interesting you say you don't set out to be sexy," I continued, "because SoulCalibur has traditionally had really elaborate breast physics in the game. That doesn't exist for gameplay, of course."

"I think, as a result, the characters as a result end up being sexy," replied Okubo. "That's not something we can deny necessarily, but in the process of game design, we just really try to go after what we think would be cool actions, cool movement, strong, powerful movements. That is kind of a byproduct of this pursuit of trying to find what we think is pretty cool." 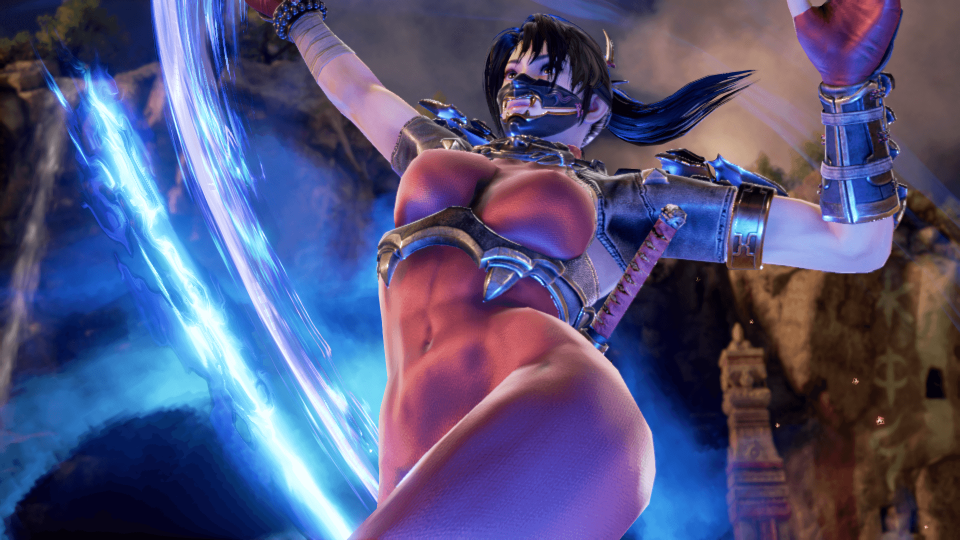 What the designers of SoulCalibur find to be "cool" often ends up looking a little like a fantasy-skinned Playboy centerfold. Okubo says that SoulCalibur's fighters are reflections of their weapons, one of SoulCalibur's defining features as a fighting game. "There's a weapon and there's a character designed around it. If it's a massive ax or a sword, naturally it'd be a more hulky type of male body," said Okubo.

"With Ivy, we felt her character with the weapon she wields has a very cold, icy, type of feel, which is this very cool beauty we were trying to express in the character. That was how those characters came to be."

SoulCalibur 6 is looking like a strong entry in the series. The E3 demo plays great, and the graphics look like its predecessors' wet dreams. With the series' future in crisis, Okubo said that with this new entry's "strong, powerful movements," the team wanted to "pursue that SoulCalibur-ness throughout the development."

Is SoulCalibur 6's Ivy, then, a cry for help, a summons to the fighting games' core fan base?

If SoulCalibur 6 feels out of place at E3 2018, that's in part because of where Bandai Namco hopes to place it, alongside the rest of gaming's mainstream appeals. But the era of The Last Of Us Part 2 is also the era of Senran Kagura, of games that don't feel the need to pretend to be something they're not, to pretend that the titillating scenes got there by accident.

That's part of the job — to make the game appeal to everyone. Yet it can't simultaneously be true that SoulCalibur didn't consider a female perspective, didn't set out to be sexy, designed fighters exclusively around weapons and, also, doubled down on the breast physics in SoulCalibur 6.

Seven years after SoulCalibur's last instalment, we're in a different climate in games. It's classier to call something what it is.