DC Universe Wants To Put Superheroes On Every Screen You Own

DC Universe is many things: A video-on-demand streaming service, a digital treasure trove of DC comics new and old, an encyclopedia, and a nostalgic throwback to the old school message boards. Most importantly, though, it’s a walled garden DC Entertainment hopes you never want to leave.

The question, of course, is whether DC Universe will be enough to lure subscribers in, especially in its earliest days when the bulk of its new live-action superhero shows aren’t yet available.

As I dug into the DC Universe’s beta features over the course of the past few weeks, I repeatedly found myself comparing its features to other platforms with similar offerings such as Netflix, Comixology and Marvel’s Unlimited service.

Though DC Universe shares some conceptual DNA with those other platforms, you don’t get the sense it’s either trying to be, or really trying to replace, any single one of them.

Instead, the service presents itself as both a content hub for diehard DC fans and a gateway drug for newcomers — the kind of service you sign up for because it’s where all of DC’s best stories live, all packaged into a dense, interactive sandbox. 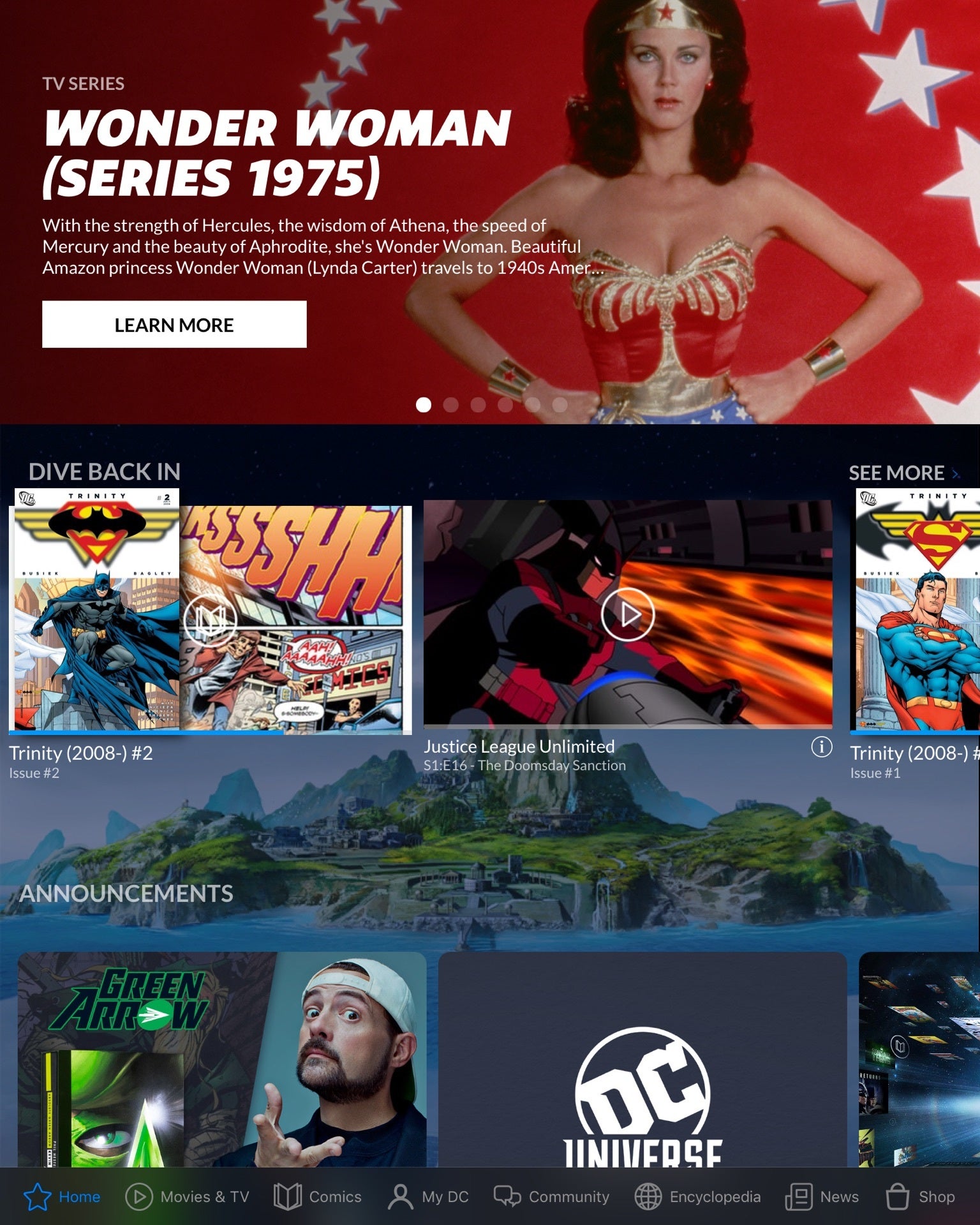 Depending on what tickles your fancy, there are a number of different places within DC Universe that’ll grab your attention. You can read comics, watch old WB/DC movies (both animated and live-action), and interact with other users in a variety of ways.

DC is emphasising that all of DC Universe’s apps across a variety of platforms — including iOS, Android, Roku, Apple TV and Amazon — are also designed to help users read comic books in a new way.

If you’ve ever used the guided move view on a digital comics reader, then DC Universe’s comics-on-a-TV will be familiar to you, though perhaps not exactly a comfortable experience.

Though the images have been optimised to display in full detail on screens much larger than phones or tablets, there’s still just something weirdly impersonal about sitting down on a couch to read a comic in a format you’re used to seeing images properly move across.

There’s a solid chance it’s a purely mental thing, but DC Universe’s comics read far more enjoyably on touchscreen devices, because the experience is still that much closer to actually flipping a physical page.

Thankfully, you can always seamlessly move your reading from one device to another while never losing your place, thanks to DC Universe’s cloud syncing feature.

Fans hoping DC Universe might provide wholly unlimited access to the publisher’s catalogue will likely be disappointed to learn that isn’t the case, but DC says its curated catalogue of some 2500 comics will update both weekly and quarterly.

The same goes for DC Universe’s collection of films and TV shows, which will include things ranging from old classics such as the Christopher Reeves Superman films to more contemporary fare such as Gotham By Gaslight. 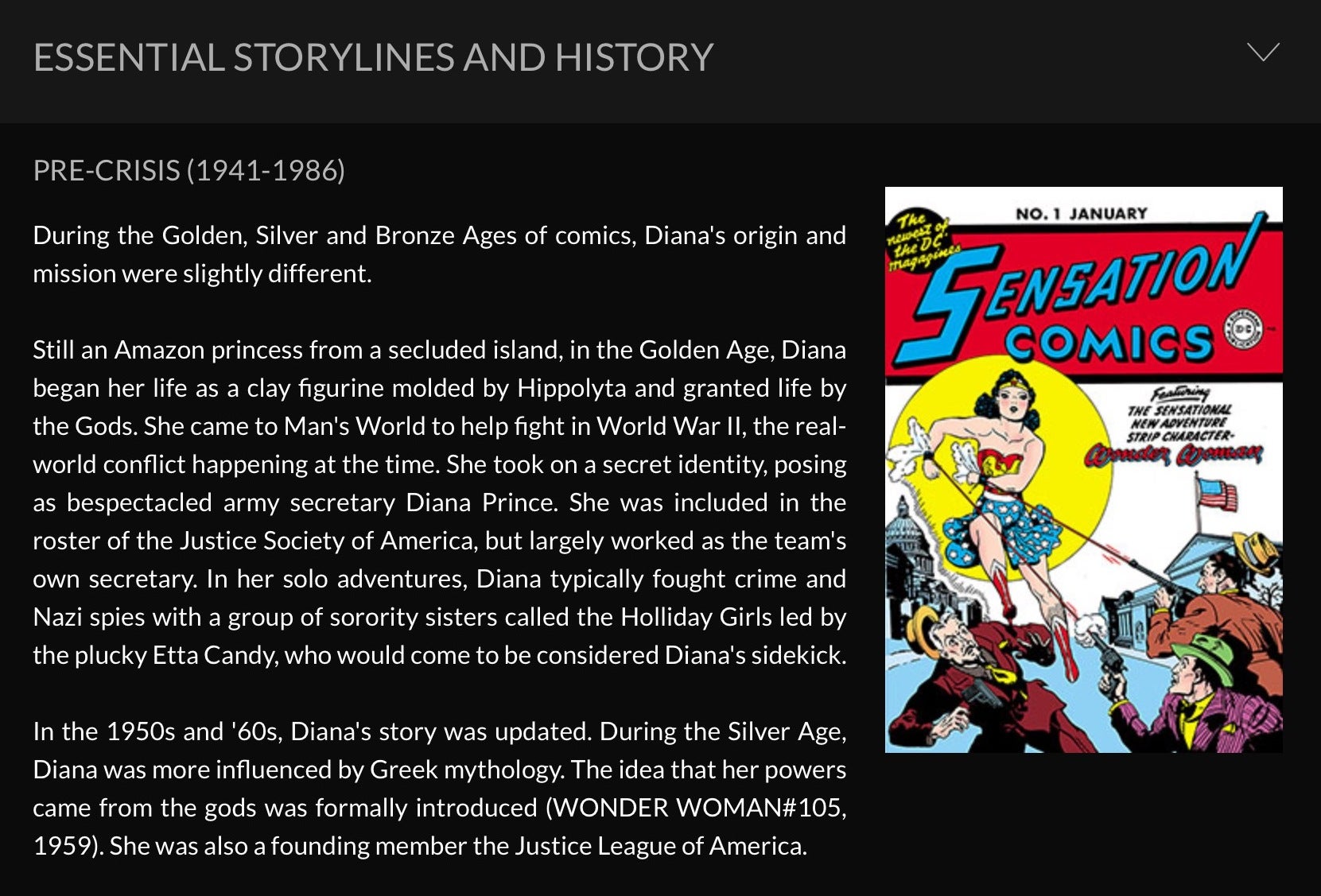 An except from Wonder Woman’s encyclopedia entry. (Image: DC)

As much fun as content consumption can be, DC Universe’s real promise lies in its nascent community features that have the potential to change the way fans see one another.

While the full breadth of DC Universe’s community won’t initially be available in the beta, users can create and participate in moderated threads within a larger section that acts as a kind of message board. There, fans will be able to chat and debate with one another to their heart’s content and potentially foster stronger bonds with one another.

DC Universe’s encyclopedia is perhaps its most daunting, incomplete and promising feature of all. If you read this website, there’s a very good chance you’ve spent many an hour scrolling through the wiki entries for dozens if not hundreds of comic book characters, either looking up obscure facts or just perusing for fun. DC Universe wants its encyclopedia to be the source fans turn to for information.

That’s admirable, but it’s a tall order given how many characters the publisher has and the amount of time it would take to build out robust entries for every single one of them.

For all the strengths and potential that DC Universe has going for it, though, it’s ultimately hindered by just one thing. In an age where you can log onto similar services and find action, rom coms, documentaries and comedy specials from a multiplicity of studios, DC Universe really only does one thing: DC’s superheroes.

Obviously, that’s the entire point of the service, and for $US7.99 ($11) a month, you’re getting a more impressive cavalcade of watchable entertainment, bundled with a comics catalogue, than Netflix offers (isn’t it weird how Netflix does comics now?)

It’s a moot point for now though, as Australian availability hasn’t been announced. But when – or if – it hits Australia, if you aren’t a DC fan you’ll definitely have to ask yourself whether DC Universe is worth adding onto however much you’re already spending on other services. As fun as it is, it probably isn’t going to replace any of them any time soon.