Pokémon Fans, I Need Y’all To Shut Up About Dexit

I’m not new to this Pokémon shit. When I was a knuckleheaded young master, high off Black Radberry Now & Laters and bedevilled by the vicious thrill of the Safari Zone, I decided that I would catch them all.

Years before Katamari Damacy would turn my capitalistic greed on its head, over a decade before Pokémon Black and White paused to say, “Hmm, maybe it is not right to capture hundreds of wild animals and force them into brutal combat with the raw power of the elements they wield,” a 7-year-old me decided I would capture all 150 unique species of pocket monsters in Pokémon Blue. That the vast majority of them would languish in the digital limbo of Bill’s Pokémon box did not deter me. This to say: I came to Pokémon Sword and Shield battle-worn.

In Blue, I caught every Pokémon I could in the wild, save for the ones that only appeared in Pokémon Red. It was an ordeal. In the days where Pokémon’s user interface was at its barest, trudging through caves and gallivanting about in tall grass managed to bore even my young, Pokémon-obsessed mind. Still I pressed on, driven by one part determination and 10 parts the motivational speech my mum gave me: “I’m not buying you another goddamn game, we just got you that one, stop acting spoiled.” 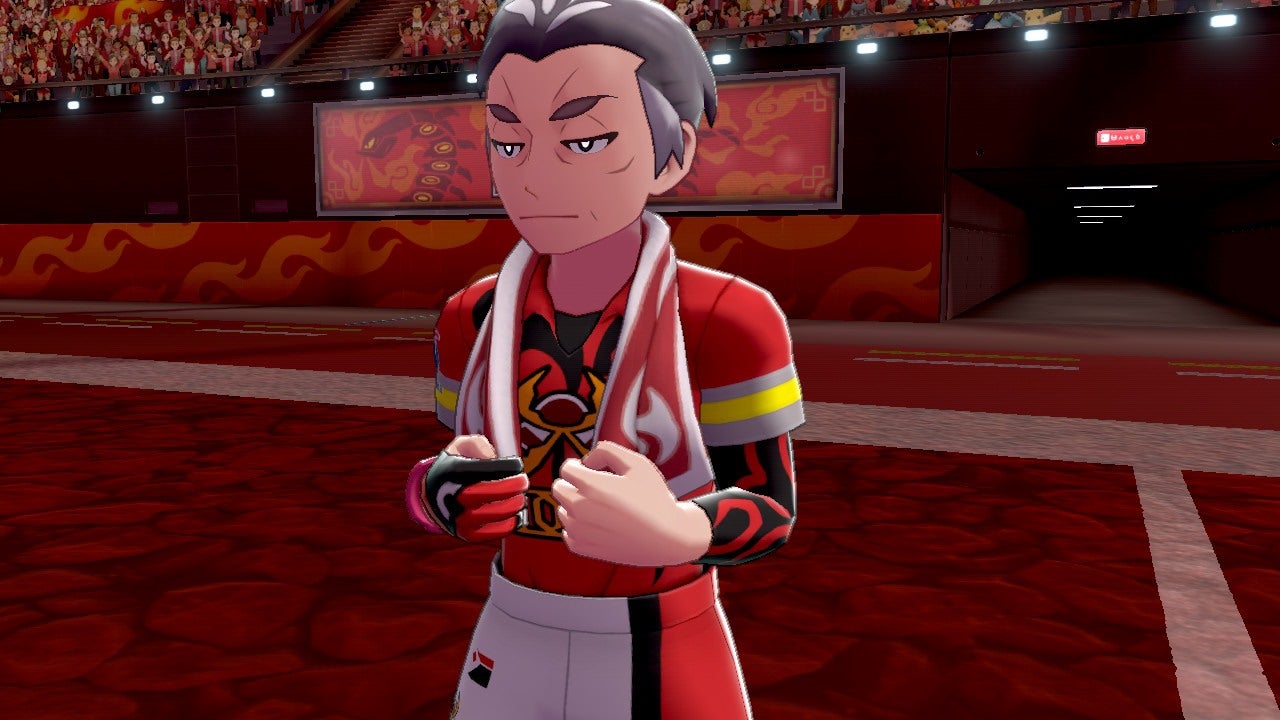 An artist’s interpretation of my mother’s face when I asked for not one but two games (Screenshot: Nintendo)

Having failed to convince my parents that I needed two nearly identical games, I would have to find another way to catch Ekans, Oddish, Mankey, Scyther, and Electabuzz. Luckily, my friend had Pokémon Red—that part was easy. What caused issues were the Pokémon you got from NPCs that couldn’t be caught in the wild. The first complication: You get one Eevee per playthrough, which you could then evolve into a Flareon, a Vaporeon, or a Jolteon. Both my friend and I loved Jolteon. We each wanted our own. I wasn’t particularly thrilled to evolve my Eevee into a Vaporeon or a Flareon, but I was the foolhardy one who wanted to fill my Pokédex. I took the Flareon. Another hurdle: You can only get either a Hitmonlee or a Hitmonchan from the washed-up master of the fighting dojo in Saffron City. (I ultimately went for Hitmonchan because it looked less goofy to me.) After carrying some transactions out on a frosted purple Link Cable, I finally caught them all, even a Mew that my friend got with a Gameshark. And I had fun, goddammit.

Well, no I didn’t. But the diploma I got was cool, I guess.

Over the two decades following Red and Blue, I’ve played every generation of Pokémon game as soon as it came out, including the remakes and direct sequels. I’ve enjoyed a lot of them; some of them have bored me. Each time, I give my Pokémon teams themed nicknames. The Bad Bitch Squad has arrived at your trial, led by a diva Primarina who is not about the bullshit. Club 96 is here, and Lola the Scorbunny is here to put a lucky rabbit’s foot up that arse. I get really attached to my Pokémon, is what I’m telling you.

Not so attached, though, that I’d ignore the thousands and thousands of hours people have poured into creating a fresh experience in an entirely new world. Once Game Freak announced that certain Pokémon wouldn’t be transferable to Sword and Shield, people lost their shit and called the absence of those Pokémon “Dexit,” ha ha ha. Like an American tourist demanding a frappuccino in an Italian cafe, this subset of Pokémon fans is hellbent on bringing what they want to bring into new regions, labour and culture be damned. 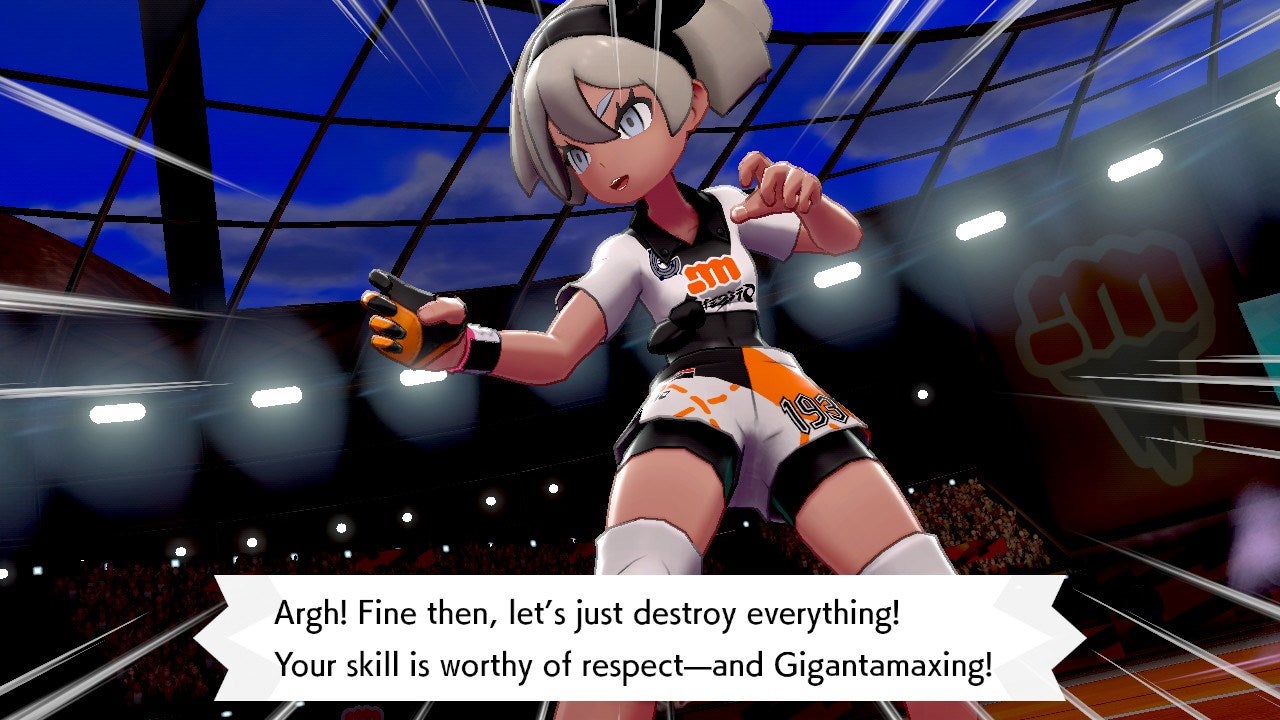 Pokémon Sword and Shield got review bombed when they came out, as tends to happen with games that release with controversy. There have been death threats. Some are comparing Game Freak to Bethesda. There is an ongoing series of “culled Pokémon family” illustrations that one fan has been posting once a day “until Dexit is reversed.” Some of you are writing brain teasers about Sword and Shield’s game design. A lot of you are patting yourselves on the back for your continued efforts in creating problems where there aren’t any. Not everyone who’s sad about Dexit is being so melodramatic—some people are actually making pretty impressive mods, which I support, and some people have gone out of their way to praise Game Freak in light of silly-arse hashtags like #GameFreakLied. But some of y’all are out here losing your marbles.

Sure, you can catch an electric corgi in Sword and Shield, but why do that when you can complain? I realise some of y’all are real attached to this data you’ve been carrying forward year-to-year since childhood, but my dusty old Charizard is tired. He can rest instead of being brought to yet another country to be pummelled by Bubble Beams and Rock Slides for the sake of winning a ribbon and some clout. 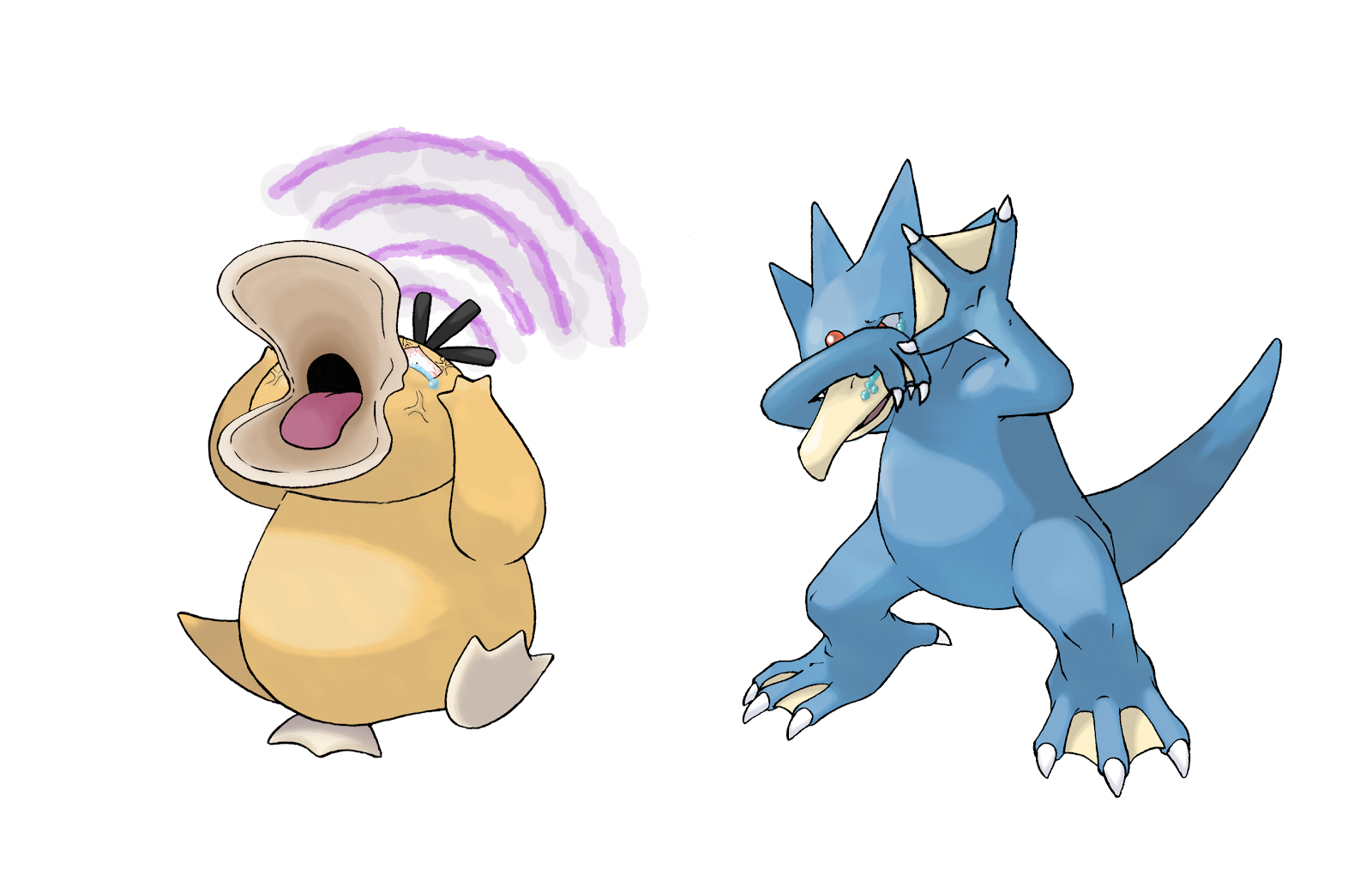 Do you know what you can catch in Pokémon Sword and Shield’s Wild Area? A fucking Jolteon. Gita caught one that was just roaming around in a thunderstorm. You know what else you can catch in—I cannot stress this enough—the wild? A goddamn Hitmonlee. I saw a whole little herd of them running around when one decided he wanted that smoke, which I provided. From the start, you can catch its baby Pokémon, Tyrogue, another ’mon you could only get from an NPC in its original game. You can then, by yourself, evolve it into as many Hitmonchan or Hitmontop or Hitmonlee as you want, or just not evolve it because it’s cute and you can catch a bunch and fill your Pokédex without worrying about all that shit.

This game is a love letter to longtime fans.

Before I won a single gym badge, I saw a Rhydon before I even saw a Rhyhorn. In the original games, you would only see these Pokémon on Victory Road. On my team I had a Galarian Farfetch’d, which I evolved into a Sirfetch’d. There’s a wild Lucario you can catch, who roars to the heavens and then Naruto runs at you. There’s a Hitmontop doing capoeira. The animations are adorable and done with care—which has made it all the more frustrating for me to see fans criticise them and stubbornly conjecture about how little time these models took Game Freak to make, with the same amount of credibility as my uncle who both works at Nintendo and definitely exists. I could go on. 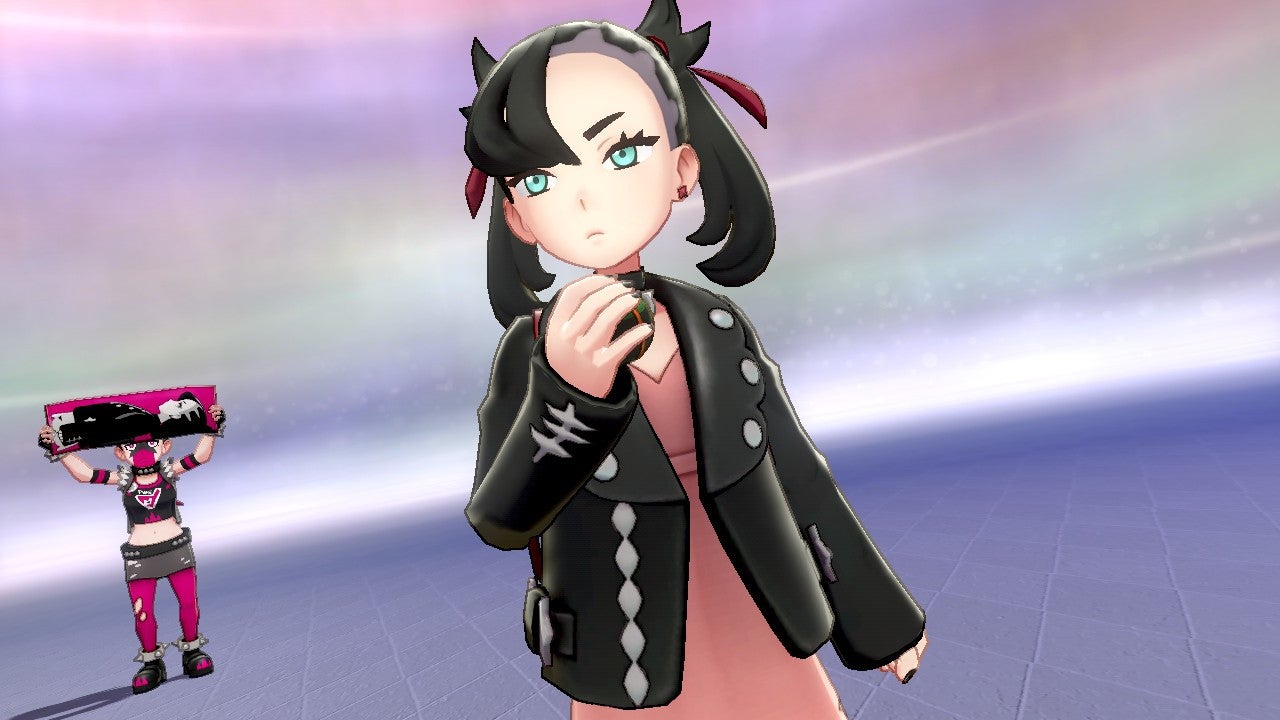 Team Yell, a funnily appropriate instance of rabid fans making things annoying for other fans. Shout out to Marnie’s jacket, though. I get dressed to Portishead sometimes, too.

The Pokémon Let’s Go games brilliantly wielded the appeal of being able to catch Pokémon that were so rare in previous games that they’d only appear in your Pokédex as “Area Unknown,” meaning they were available only via NPCs or special events. Catching a wild Charizard or Bulbasaur in Let’s Go felt surreal. Pokémon Sword and Shield ramp that up by extending that across generations, giving new life to old Pokémon. The result is a Pokémon game that’s more satisfying than the games have felt in years. The number of new Galarian forms for old ’mons is a cherry on top, even if Galarian Meowth’s evolution, Perrserker, looks like it would try to colonise my country and give me smallpox. 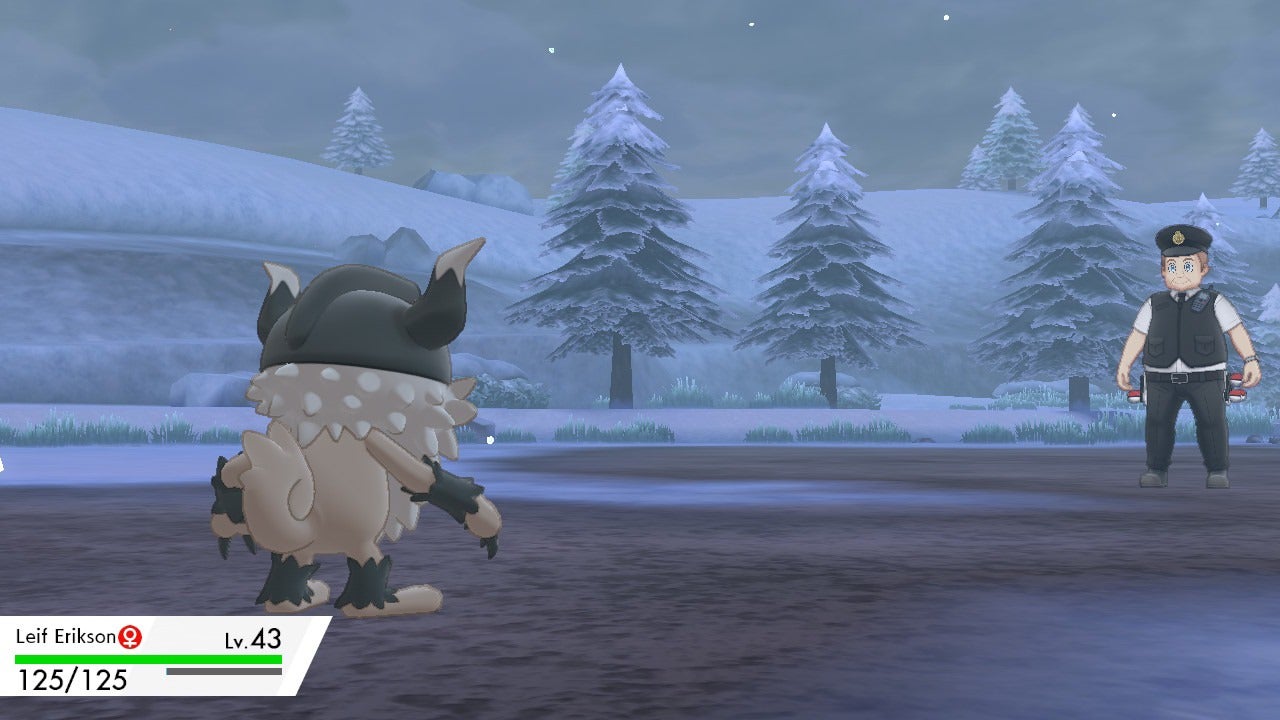 My Perrserker about to fuck up a police officer continuing the series’ storied history of Pokémon-backed police brutality.

Pokémon Sword and Shield is bursting with design choices that appeal to exactly the type of fan who is most likely to complain about Dexit—the longtime players, the players who grew up following the Pokémon-as-friends philosophy to the letter. There are so many things done specifically for diehard fans that seeing the loud and rude contingent of people losing their shit has made me want to Comet Punch a wall.

I don’t mind critiques of the game as a whole. There are things to genuinely and reasonably not like about this game! Here are a few off the top of my head:

Man, look. I understand the passion behind these games. A lot of us grew up with them, became gamers because of them. But that’s all the more reason to critique them respectfully and reasonably. There’s no reason for all the death threats and direct attacks and histrionics. To the fans who feel terrible leaving their Poké-babies in the past, I have good news to share from this random woman outside the Pokémon Centre. 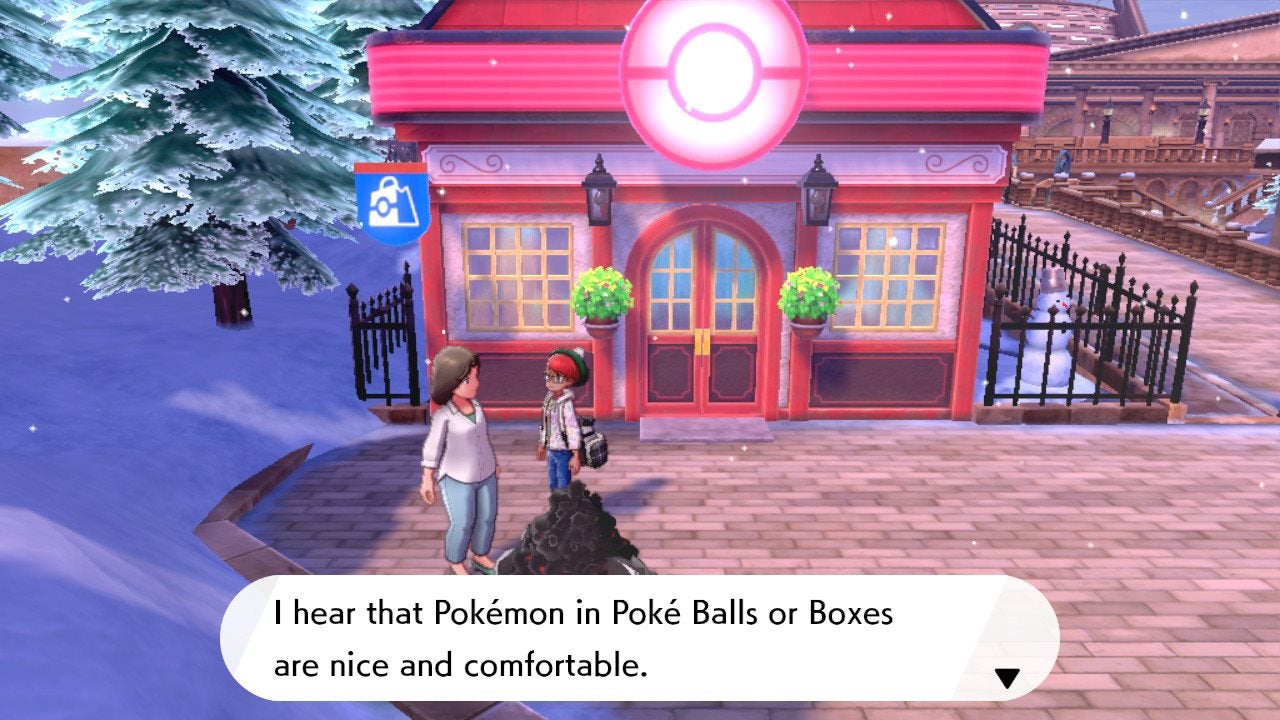 Those old Pokémon will be fine, probably.