I do not enjoy questing in Snack World: The Dungeon Crawl Gold. It’s boring and repetitive, killing the same creatures on the same maps for underwhelming rewards. And yet I’ve been playing for eight hours and can’t seem to put down my Joy-Cons. What’s keeping me playing? Is it the puns and poop jokes? It’s probably the puns and poop jokes.

Released today for the Switch in the US, Snack World: The Dungeon Crawl Gold is the port of a 2018 Japanese Switch game that is an enhanced port of a 2017 Japanese 3DS game. The Snack World is the latest multimedia property created by developer Level-5, in the same vein as the popular Yo-Kai Watch series. In Japan, Snack World is a video game, a manga series, a CG-animated anime program, and a toy line.

I am not familiar with the characters, almost all of which are named after some sort of sauce, snack, or other foodstuffs. From what I can gather, Snack World revolves around the adventures of spiky-haired, bandana-wearing protagonist Chup, questing with his friends in a world that’s a generic fantasy RPG setting mixed with modern conveniences like cell phones. 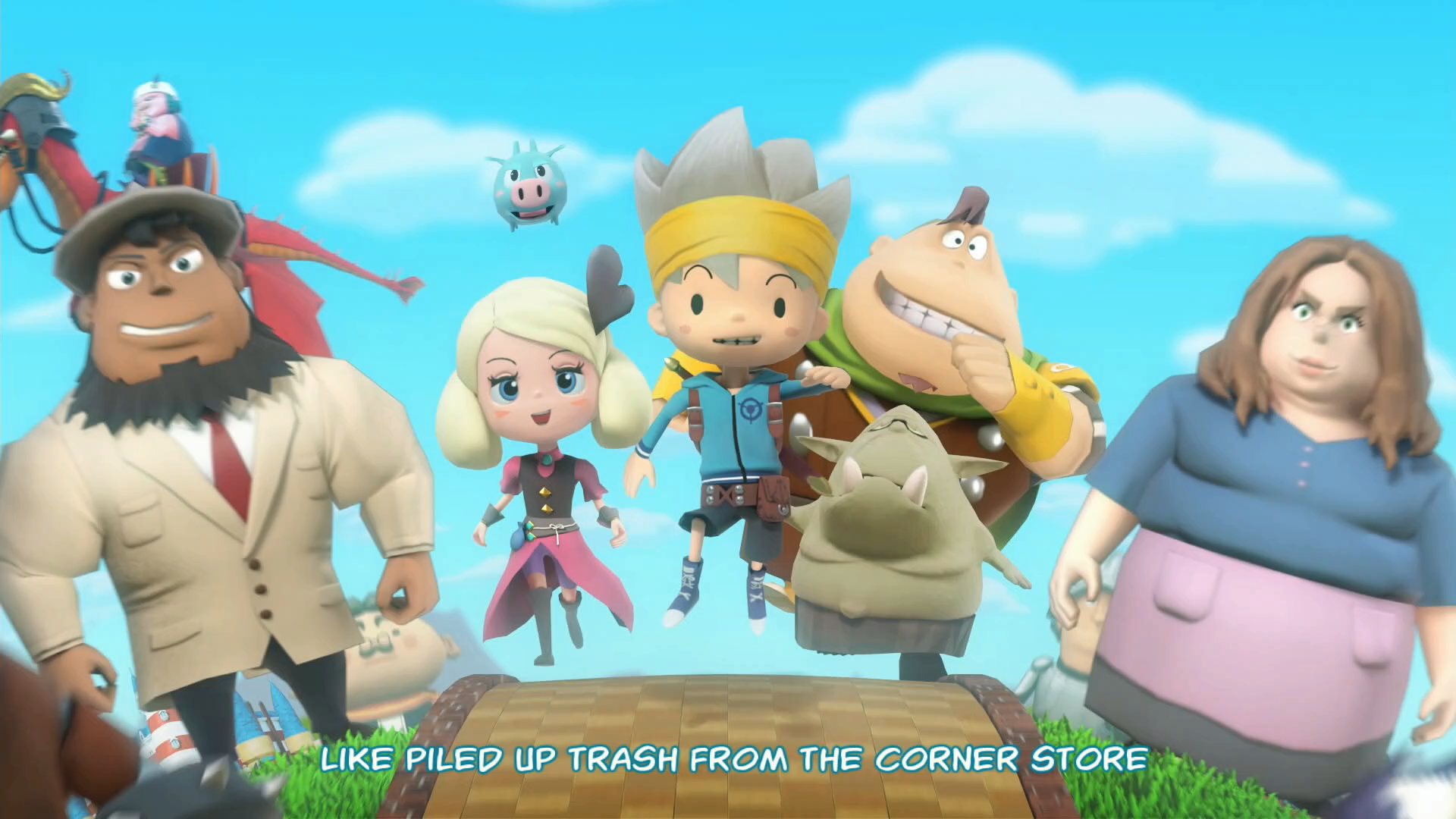 While I am unfamiliar with the characters (there is an in-game database with bios that helps), I am charmed by Snack World: The Dungeon Crawl. It opens with a catchy theme song with lyrics about staying up all night eating pork chops. This seems like a good reason to stay up all night.

The game world is bright and cartoonish, though sometimes blurry textures betray the game as the upscaled 3DS RPG it is. The frolicsome music, the egregious puns at every turn, the odd-looking yet endearing characters—there’s Level-5-style whimsy at every turn. Even the menus are fun. 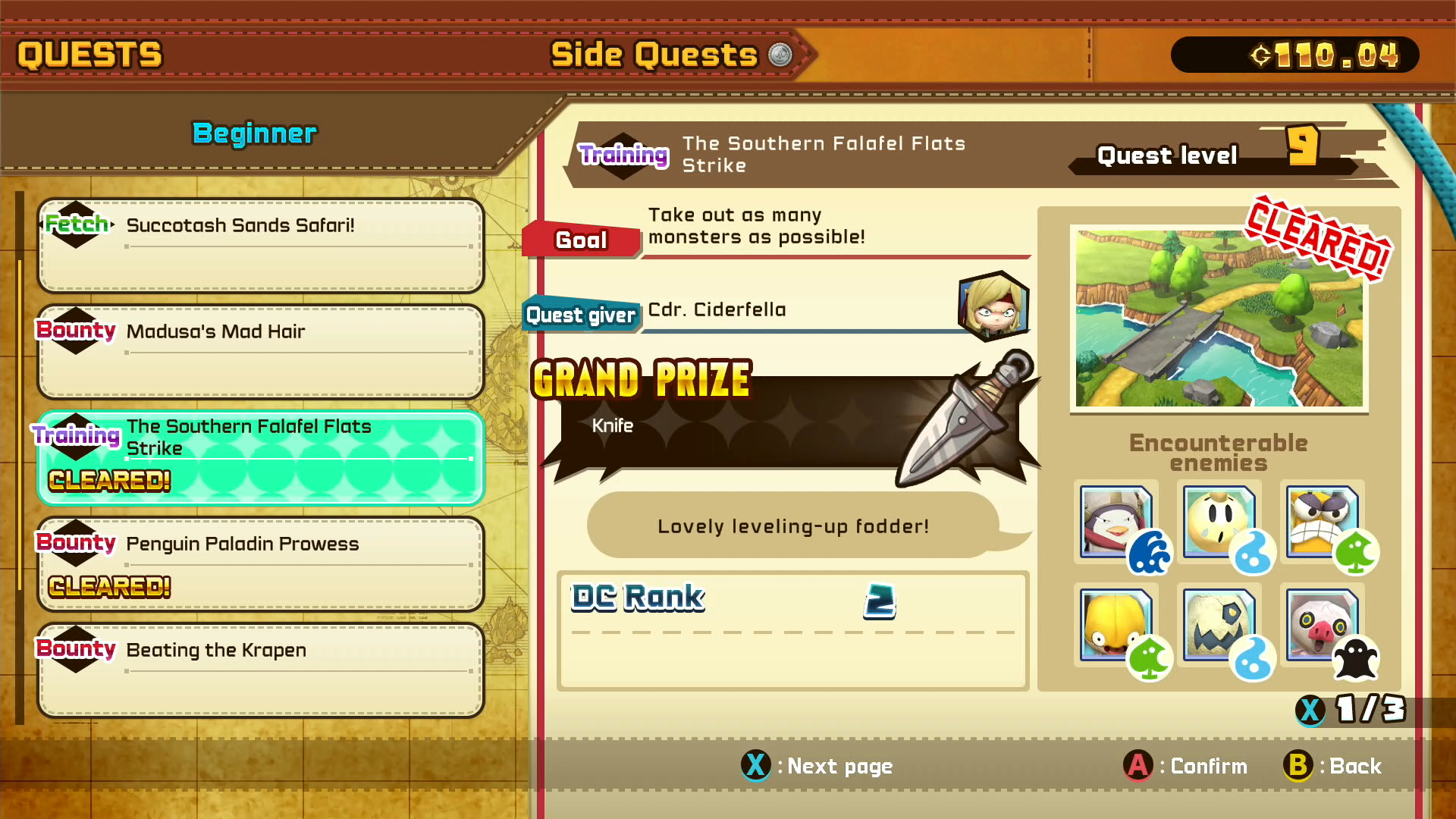 What’s not fun is Snack World’s core gameplay loop. Players create a character and are immediately thrust into the questing grind. The obnoxious and spoiled Princess Melonia needs some sort of trendy gem, so doting King Papaya sends the player off into the wilds to fetch it for her. The player wanders the countryside or explores randomised dungeons, avoiding traps and gathering treasure while smacking down hordes of punnily named critters like the Dieclops, an animated six-sided die. 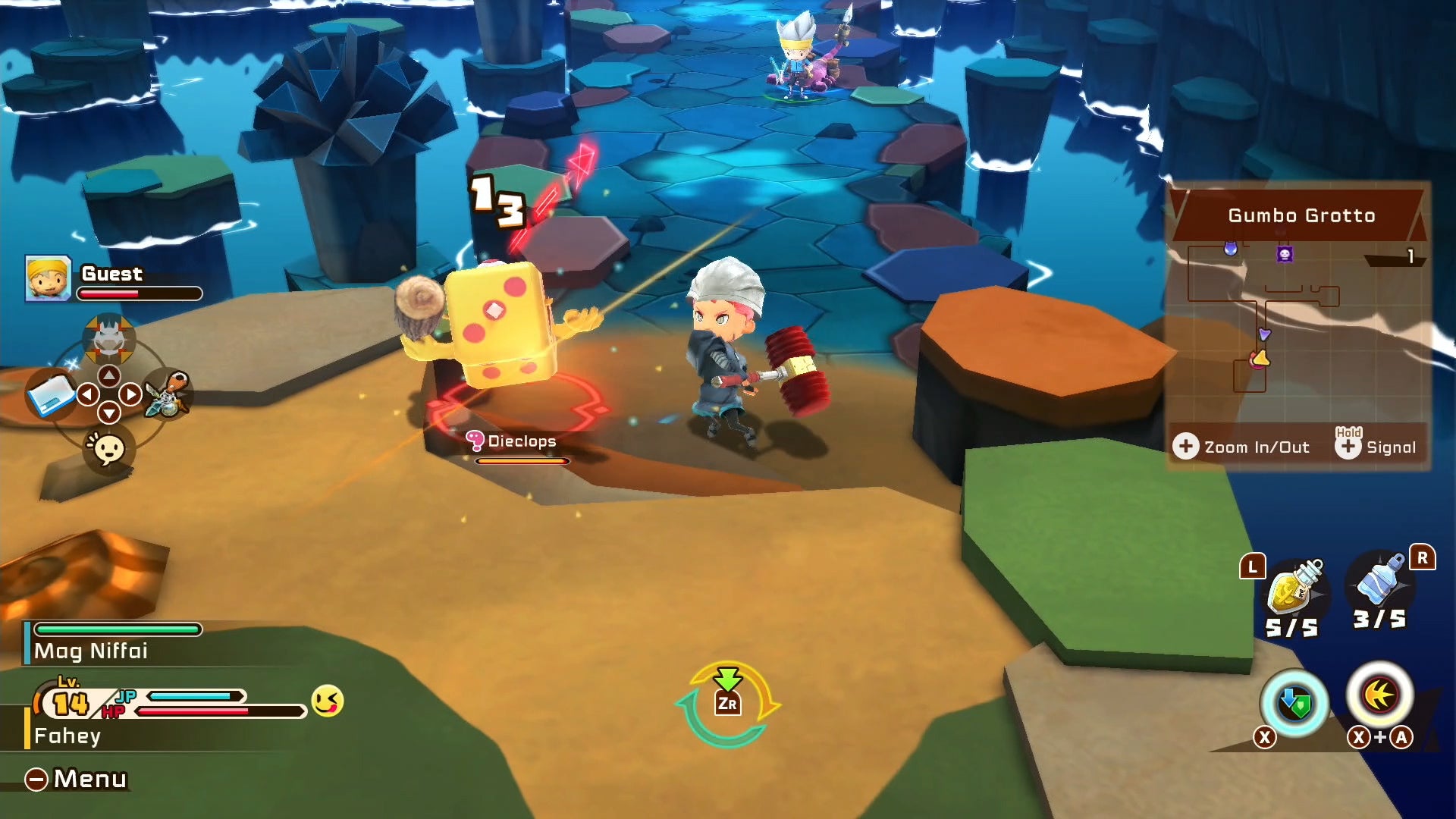 I enjoy hitting these creatures. I like cycling through the various weapons my character can bring into the dungeons, like cartoon hammers, bows, magical staves, and swords and shields. I am compelled by the game’s “snack” mechanic, which lets me capture monsters after I’ve beaten a certain number and add them to my party to fight by my side.

What I hate is finishing quests. All of that effort, racing through the same random dungeons over and over again, is rewarded not with spectacular gear, but ingredients to craft spectacular gear. Big story quests will drop the odd piece of gear but for the most part, it’s treasure chests full of cotton and materials I can use to upgrade or create items and equipment. 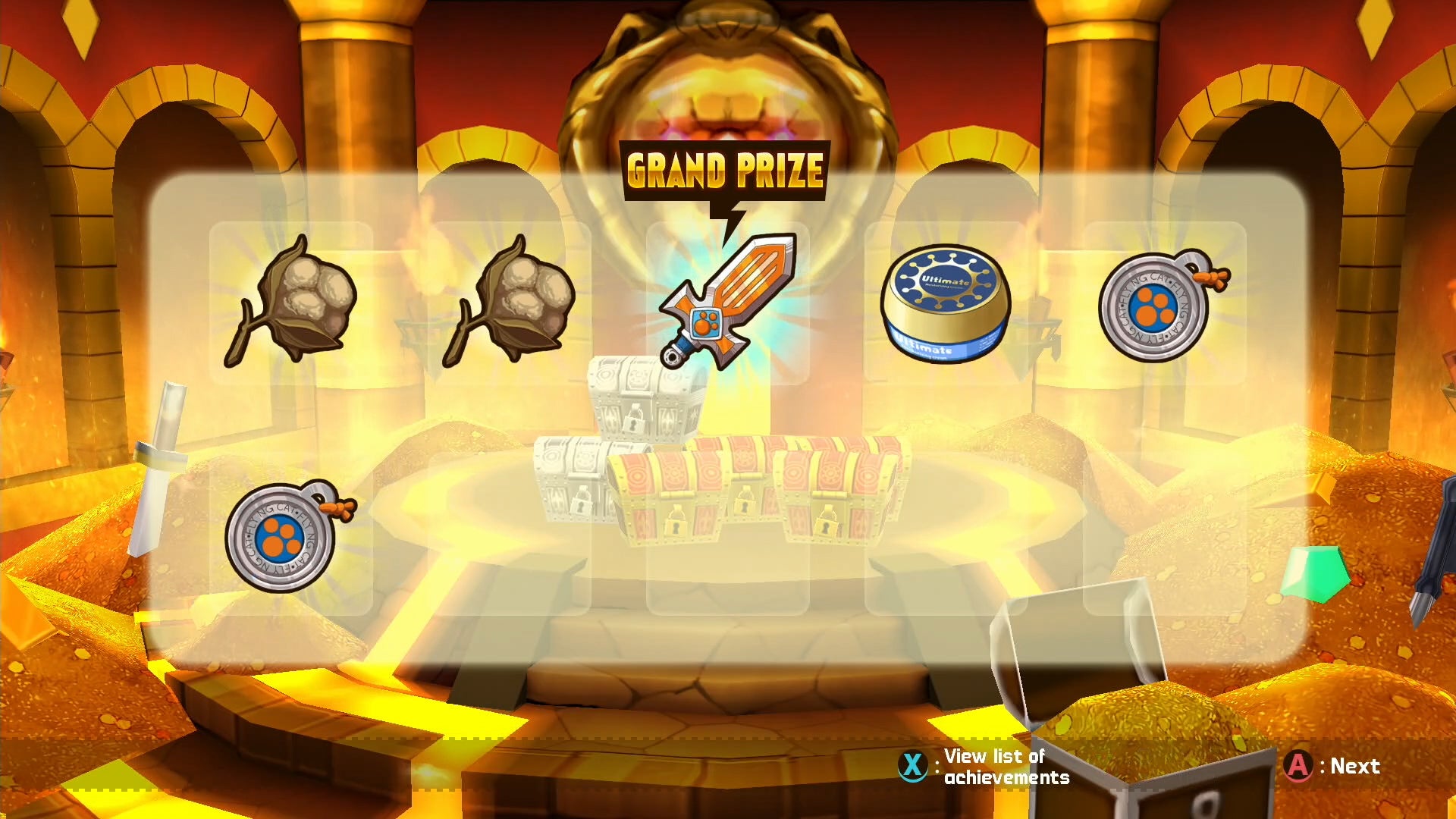 I do not enjoy this cycle. I do not feel fulfilled at the end of each adventure. I’m dropped back into the game’s main village square once a dungeon is done, with the expectation that I’ll pick another quest and get right back to it. It feels like I am doing chores, shades of another Level-5 game, 3DS chore simulator Fantasy Life.

Why do I keep playing? Part of it is the mindless grind. Hopping online with two or three random players and burning through quests is not the worst way to spend an afternoon. Sure, we’re collecting crafting materials, but we’re doing it together, and that makes all the difference.

I think most of the reason I keep playing, however, is the game’s sick sense of humour. The puns are bad. Sexual innuendo runs rampant. You want scatological humour? Here’s an entire quest based around procuring skin cream from a creature known as The Krapen. Guess what the skin cream is. Go on, guess.

It’s poop. Poop they bring back to the princess, who runs off to rub it all over her body. Snack World, ladies and gentlemen. An instant classic.