The Sonic The Hedgehog Movie Is A Little Weird, But Mostly Fine

When I left the theatre after a private screening of Sonic the Hedgehog, one of the organisers walked up to me with a question. Would the movie please hardcore fans? I took a moment to think. It didn’t matter, I said, shrugging. It wasn’t a movie for them; it was a movie made for kids. A movie with a sappy friendship plot, a silly cartoon animal, and Jim Carrey. Will hardcore fans love Sonic the Hedgehog? I don’t care. Kids will, and that’s the point.

If you told me beforehand that I’d walk away from Sonic the Hedgehog smiling, I wouldn’t have believed you. I am one of the aforementioned hardcore Sonic fans. The Sega Genesis was my first console, and Green Hill Zone is as familiar to me as the backyard of my childhood home—even if I think Sonic the Hedgehog 2’s Emerald Hill Zone is the better level. I dressed up as Sonic for Halloween one year, started reading the Archie comic series from issue number one, and will gladly spend hours explaining to you why Sonic Adventure’s use of hub worlds is absolutely a good thing. I love Sonic, and the early details about the new movie sounded nothing like the Sonic I knew. So, what? He’s in the real world and his friend is a cop? Robotnik is some type of government Men in Black scientist? There’s no chaos emeralds? Sounds like bullshit to me.

Then came the reveal of Sonic’s original design. He was a tangled little thing with small eyes and a freak mouth full of human-like teeth. It was shocking enough to make me feel that Sonic the Hedgehog would probably be a disaster. The internet—contingents of both good-hearted true blue bomberheads and less well-meaning 40-year-old YouTube opportunists who rant about Captain Marvel—were not pleased. That moment of digital saber-rattling eventually led to a redesign much more in line with the Sonic folks knew. But that reaction felt excessive. Uproar meant meetings meant delays meant art-sessions meant animation dashes. The Vancouver studio of the visual effects company responsible for the work, Moving Picture Company, shut down last December. It’s not clear whether the decision to redo the animation caused the shutdown, but their last project would give fans the Sonic they wanted before losing their jobs. If that’s a downer, please know that Sonic the Hedgehog is fun. It is not the thing that nerds probably wanted: a reference-packed recreation of their favourite video game plots. It’s strange; a mixture of a buddy-cop and road trip movie whose scenes I remember distinctly but which will ultimately leave no real impression on me. Instead, whenever I think about Sonic the Hedgehog, I’ll think about the theatre I was in. It was packed with dumbass critics like me, but also with parents and their kids. This is what I know: A lot of people worked extra hard to make a loveable hedgehog have an adventure on that screen and they did their job perfectly.

When Sonic goofed off and played baseball by himself—moving so fast that he fielded all positions—folks laughed. When Sonic was in danger, a kid behind me very worriedly asked their mum if he was ok. Of course Sonic’s ok, kiddo; you’ll see. He’ll get up and beat the bad guys. It was like watching an old friend perform familiar tricks. Sonic means the world to me, and now maybe there’s a few more kids out there who think he’s the coolest thing ever. Which, of course, he is.

Sonic the Hedgehog abandons pretty much everything from the video games or other materials. In this version of the story, Sonic’s basically an alien (or at least an interdimensional animal pal) who lives in the idyllic town of Green Hills. Watching human life from a distance, he lives vicariously through others. He’s enthusiastic about the world around him, particularly the local sheriff Tom Wachowski (played by living Greek statue James Marsden). Wachowski’s life in Green Hills is dull; the most he might deal with on a given day are raccoons. Both of these characters want more. Sonic wants real friends and family; Tom wants excitement and adventure. It’s a simple set up, and they both come to rely on each other after one fateful night where Sonic runs so damn fast that he knocks out all the power on the West Coast. This attracts the attention of the United States government, who immediately dispatch the questionable Dr. Robotnik (Jim Carrey) to investigate the situation.

The glue is Ben Schwartz’s energetic performance as Sonic. It’s not quite as cheeky as Jaleel White’s turn as Sonic during the 1990s cartoon series or as brash as the anime-inspired modern games. Schwartz instead opts for something more vulnerable. Sonic’s a lonely kid brimming with energy and an eagerness to please others. That sentimentality plays well with Marden’s everyman performance as Wachowski. It’s actually surprising how well the two work together. Schwartz’ Sonic is a joke-a-second goofball slowly becoming a hero, and Marsden—who by now has cornered the market on well-meaning fellas with credits including Westworld and Enchanted—is clearly having fun. There’s just enough of a growing father/son dynamic to give development but it never sinks into wrought oversentimentality. Again, this is a movie for kids, about growth and family and friend-making. I don’t think Tom Wachowski is going down in the fan pantheon of favourite characters, but thanks to Schwartz and Marsden’s shared earnestness, I felt invested enough. 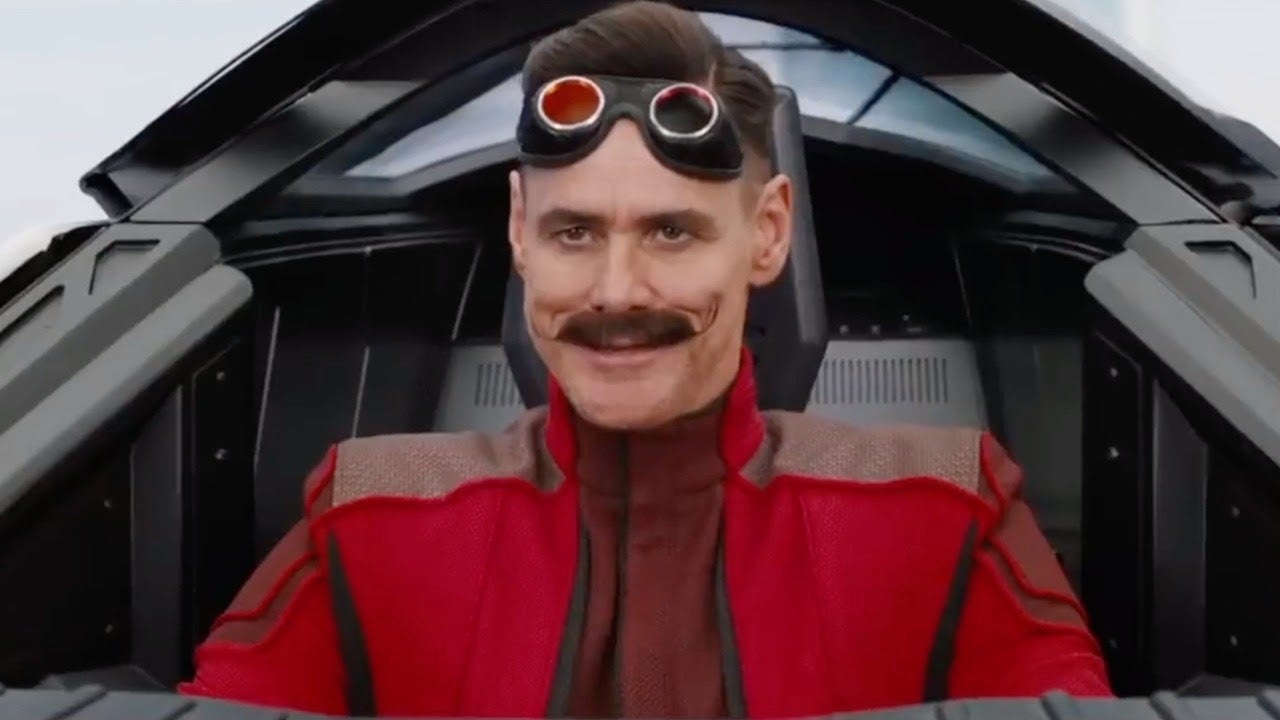 Opposite the cosy friendship of Tom and Sonic is the absolute batshit world of Jim Carrey’s Doctor Robotnik. I’ve had a few days to mull things over, and I cannot decide if I absolutely love this stupid little gremlin villain or if he’s officially way too much to deal with. Please understand that I struggle with the knowledge that anyone ever found Ace Ventura Pet Detective funny, and while I love Dumb and Dumber, I’m far more likely to re-watch The Truman Show than one of Carrey’ slapsticks. Few have aged well. There’s no denying that this is a man who has perfect control of his body in a comedic sense. Robotnik’s various contortions, screwball mugging, and exclamations are delivered with Carrey’s famous excess, but it’s somehow not as enjoyable as Schwartz’ hyperactive chirpings. The script never quite manages to make Robotnik’s intellect manifest as anything other than insufferably over-syllabic ramblings. For all of his bumblings in the video games and comics, Robotnik was a villain first and foremost. He’s dangerous. Carrey’s Robotnik never quite manages that.

Sonic the Hedgehog isn’t an action movie per-se, but there’s enough excitement to punctuate the emotion. The plot’s roadtrip structure eventually shifts to a lengthy chase, which does provide plenty of action showdowns with Robotnik’s dastardly mechs and egg-robots but also means that the two most iconic characters in the movie tends to interact with each other in bite-sized pieces. Sometimes, Robotnik’s not really around. Sonic will smash a robot, often in spectacular fashion, only for a quick cutaway to Robotnik in his lab shaking his fist or pushing a button to summon another mechano-monstrosity. This feels like a missed opportunity. Sonic the Hedgehog clearly has aspirations of a sequel. It is, to an extent, an origin story for the rivalry between Sonic and Robotnik. It takes until the final confrontation for the hero/villain dynamic to fully form and it fizzles out too quickly in an anti-climactic showdown. Sonic the Hedgehog is fine. That’s the best thing I can say for it here, particularly for any diehard reader who finds themselves conflicted about their investment in this movie. It’s fine! The premise is flimsy and the script isn’t memorable but the earnestness is infectious. It’s a silly story about growing up and finding your place, which just happens to have a blue hedgehog and a mustachioed Jim Carrey. If you wanted some intense adaptation of Sonic Adventure or something more specific to the games, you won’t find it here. It’s not your movie; it’s your little brother’s. Leave expectations behind and you’ll have some fun.