David Cage’s Detroit: Become Human wants to talk about difficult questions. The game from Cage’s studio Quantic Dream, is a story of android prejudice and rebellion touches upon questions of the soul and the nature of being. But Detroit is also a bloated action movie romp. One sequence, a series in a pattern for Cage, denigrates the female protagonist. It’s pointless voyeurism, and I’m sick of it.

Androids are commonplace in Detroit: Become Human. They perform construction work, provide home and hospice care, fight in the military, and perform domestic cleaning. One of these androids is Kara, a housecleaning android purchased by an alcoholic named Todd.

In one of the game’s most controversial scenes, Kara achieves sentience when Todd beats and abuses his young daughter Alice. While player decisions impact Todd’s fate, the story usually ends with Kara and Alice fleeing. Alone and with nowhere to go, they arrive on the doorstep of a man named Zlatko who they believe can help them. The scene that follows is exploitative, presenting a tired scenario wherein Kara is bound and menaced.

It is a scene we’ve encountered in Cage’s works before from Heavy Rain to Beyond: Two Souls. Each of these games takes their female protagonist and places them in uncontrollable situations of physical or sexual violence. Zlakto informs Kara that in order to smuggle her to safety, he needs to disable a tracking device implanted in her body. The device to remove it, as luck would have it, is in his basement.

All Kara needs to do is head down there and step into the machine. Of course, Zlatko is playing her. The device actually wipes androids memories and turns them into his servants. The player encounters one of these servant at the start of the scene, a large black android called Luther. As Kara steps into the machine, she is bound by two metallic grips and left in the basement while Zlatko and Luther take Alice away.

The player must find a way to free Kara. If this sounds familiar to anyone, that’s because this is a scenario Cage is fond of.

In Heavy Rain, journalist Madison Page is one of four protagonists looking to uncover the identity of the Origami Killer, a murderer who targets children. In her search, she comes to the home of someone who owned an apartment that the killer used.

While it is possible to leave without incident, many players will find themselves drugged and bound in the man’s basement. Either they break free and escape or the man uses crude powertools to mangle and kill Madison.

In Beyond: Two Souls, protagonist Jodie Holmes sneaks out of the military base where she is staying and goes to a local bar. The bar inhabitants eventually slam her on top of a pool table and attempt to rape her. She is sixteen.

These instances of “controllable helplessness” invariably exist to disempower and imperil Cage’s female protagonists in a fetishtishtic display of violence. Cage pulls them off with a troubling consistency.

If the player does not act or fails too many prompts, these women are killed, traumatically assaulted or functionally lobotomized. In other cases, they are sexually humiliated and assaulted.

Often, these scenes do little to progress their stories should they live. If Madison survives, she pursues another lead. Jodie always survives before any sexual contact can occur and the only repercussion to the player is that she will have a panic attack in a later scene if she attempts intimacy with one of the male characters. 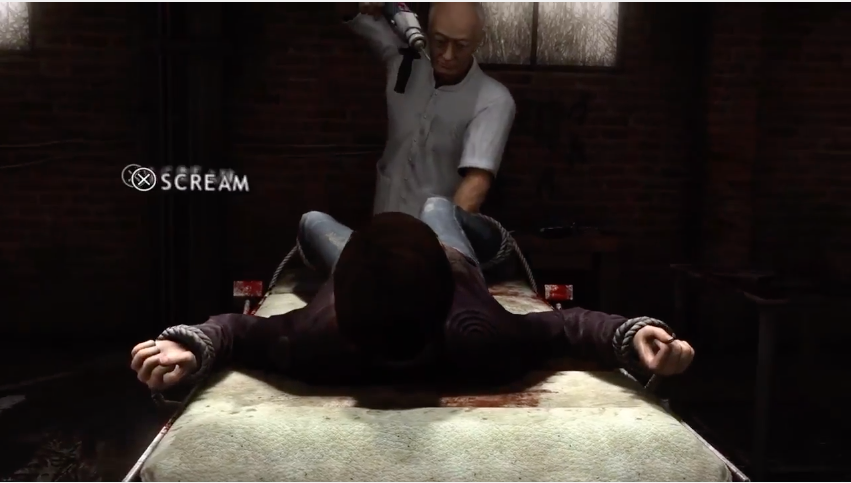 Detroit repeats this pattern, imperiling Kara for little purpose than creating an action set piece for the player to complete. She is an object, a doll dangled before the player for them to save.

Male protagonists are occasionally bound in these games as well, but Cage consistently drags his female characters into compromising positions where loathsome men enact their power over them, for the sheer sake of drama.

In isolation, these scenes are not necessarily a problem. Art can address many different scenarios with frankness, even things we find uncomfortable. But when a pattern of behaviour emerges, attention must be paid. Detroit repeats tropes and scenarios from previous games in a gesture that’s not just exploitative but unimaginative. Can we go a game without compromising a woman’s agency for the sake of a cheap thrill.

Detroit‘s Kara captivity scene continues to be infuriating when she tries to escape. As the game embraces a horror movie tone, Kara must sneak around Zlatko’s mansion to find Alice and escape.

When he and Luther discover that she is missing, they hunt through rooms to find her. The player must sneak from location to location and avoid detection. It recalls another of Cage’s works The Taxidermist, a Heavy Rain demo wherein Madison sneaks around the house of a killer who kills women and preserves their corpse. 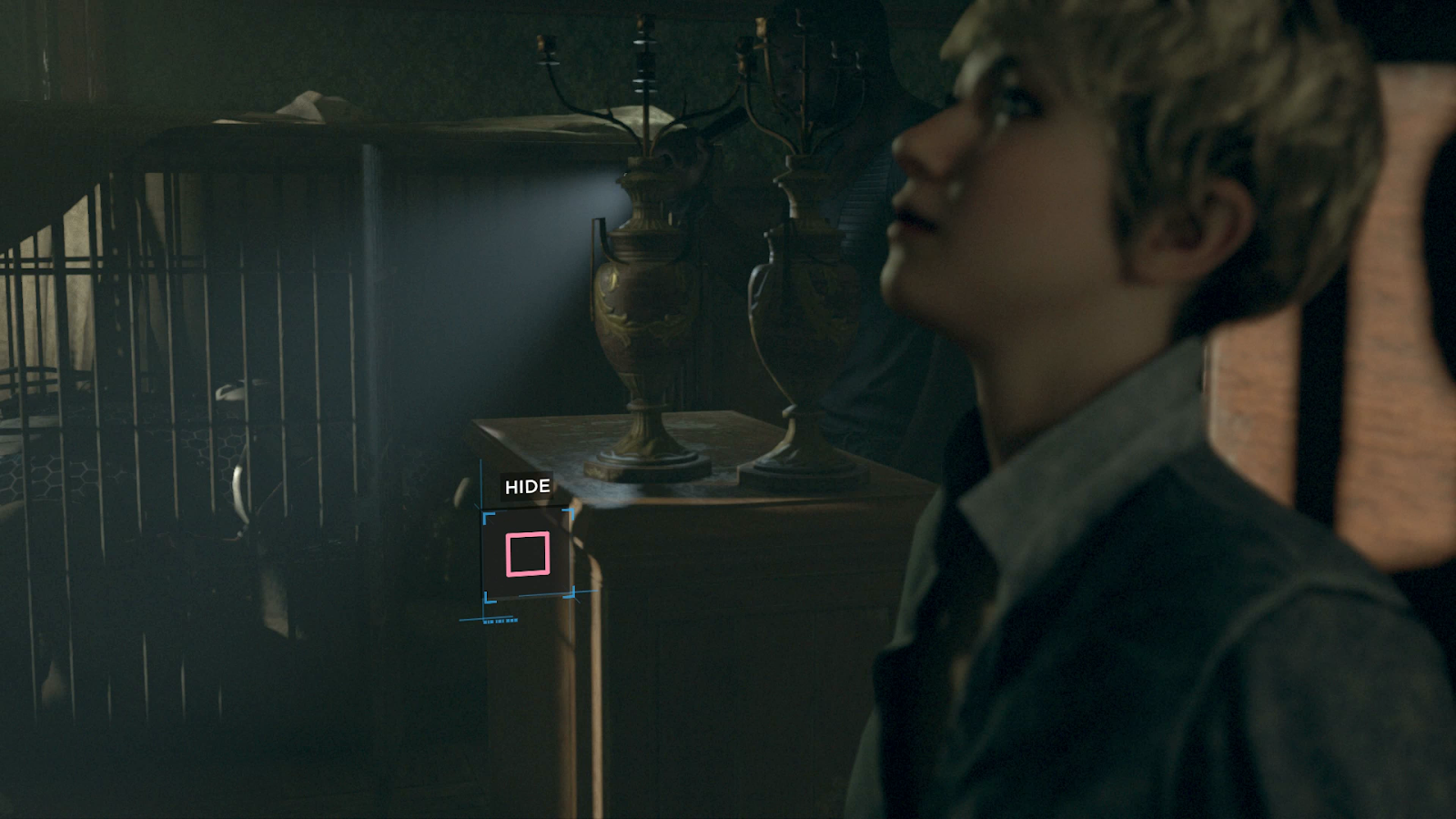 The sense of danger, as crafted by Cage, comes from a small white woman hiding from a towering black man. The camera frames him like a slasher villain and the gameplay indirectly conflates him with The Taxidermist‘s serial killer. Kara’s helplessness, a trait thrust upon her because she is a woman, reflects back upon the world itself. Luther becomes a monster not unlike Clock Tower’s Scissorman or Resident Evil 3‘s Nemesis. He only breaks free from Zlatko’s control when he sees how much Kara loves Alice. The black man cannot save himself; he can only be awakened into purity by the motherly plight of a white woman.

Women are not people in David Cage games. They are rhetorical devices meant to highlight the value of player choice. This is no more clear than how Detroit handles the more dire outcome of the much discussed domestic abuse scene. If the player fails to intervene or complete enough button prompts, Todd kills Kara and Alice.

In one version of the scene, Kara’s discarded corpse is left in the backyard as rain pours down on it. Failing here requires the player to almost intentionally leave the pair to their fate. This is true for the scenario with Zlatko as well. If Kara’s memory is wiped, you have a limited time to regain your memory or leave her to her fate. 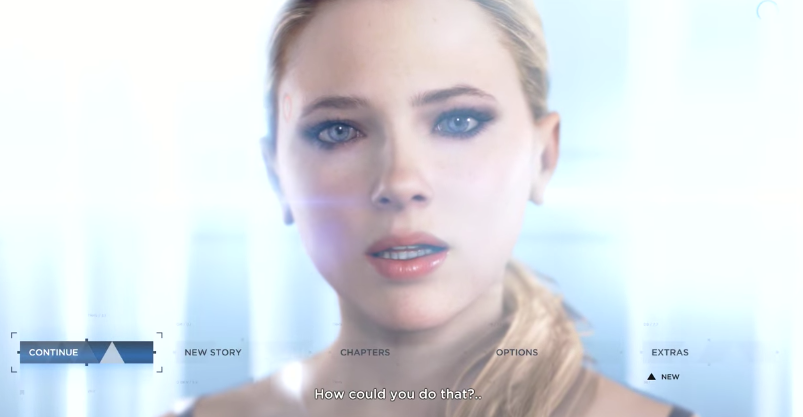 Detroit‘s main menu screen features an android assistant who comments on your gameplay. If you fail to save Kara and Alice in the aforementioned scenarios, she scolds you.

After all, you were the player and you could have saved them. It is meant to be a damning moment, an indictment of the player for not rising up to save the poor women. It comes off as emotional manipulation. The player might have been able to save them, but Cage did not need to so grossly imperil them.

This pattern of abusing women characters for easy emotional content has repeated in game after game after game. Time after time, I have watched as women in Quantic Dream games have been beaten and bound, murdered and discarded. Enough.

If Detroit wants to scold the player about why they did not save Kara and Alice, it needs to turn around and ask question if it was necessary to damsel and abuse them to begin with.