Jessie And James Are As Evil, Stupid, And Delightful As Always In Pokémon Let’s Go

Pokémon Let’s Go revisits a lot of the same scenarios from Pokémon Red and Blue, including run-ins with members of the villainous Team Rocket organisation.

In Let’s Go, these aren’t just any Team Rocket members, it’s the notorious Jessie and James from the Pokémon anime. They’re as evil and dim-witted as they’ve always been, and as a result, they’re the funniest characters in the game.

Jessie and James couldn’t have appeared in Pokémon Red and Blue the first time around, since the game came out a year before the Pokémon anime began. In the anime, the two Team Rocket members served as frequent antagonists to Ash and his friends.

Jessie and James made it their mission to steal Ash’s Pikachu, but continually got their asses kicked by a child. After each defeat they’d be punted into the sky, crying out, “Team Rocket’s blasting off again!”

I was delighted when they made their return in Pokémon Let’s Go with their characterization intact. In the anime, Jessie and James were the two main representatives of Team Rocket that would show up, but in Let’s Go, they’re just two of many members of this larger criminal organisation that you interact with in other, more serious ways.

After you see Jessie and James playing games at an arcade because they can’t figure out how to get into their hideout, you defeat Team Rocket at Sylph Co. while the larger organisation is doing a hostile takeover of a company. The contrast between the more serious evil deeds of the rest of Team Rocket and Jessie and James just continually failing at things is hilarious.

Sometimes, the struggles of the two most inept Team Rocket members can be really relatable.

My favourite moment with Jessie and James comes after the midpoint of the game, when you visit Fuschia City, which has the Pokémon Go Park. Transferring Pokémon to your game from Pokémon Go is actually a bit of a hassle, so I left the park a little annoyed. As I was leaving town, I ran into Jesse and James, who were also feeling down on their luck.

They too had been stymied by Pokémon Go Park. “It’s so complicated,” James lamented, “It was all ‘app this’ and ‘connectivity that …’.”

“Why can’t I just trip over a get-rich-quick scheme already?” said Jessie. Same! I thought to myself as I read their dialogue. 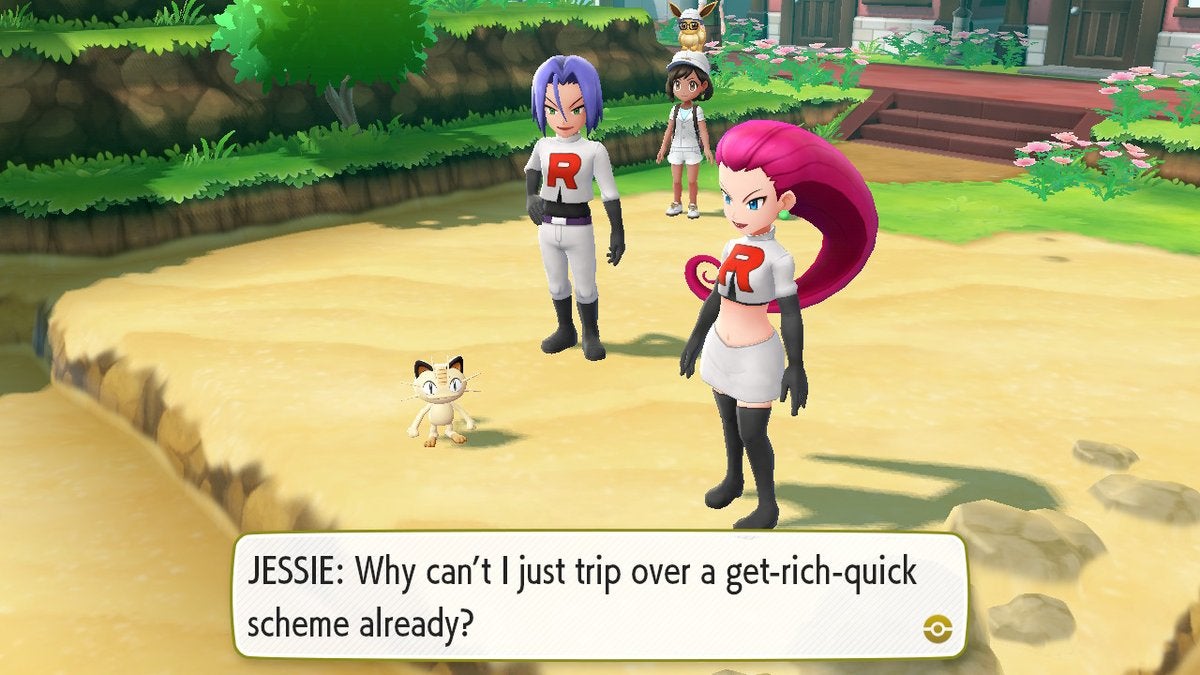 These jokes reminded me of everything I liked about Team Skull from Sun and Moon; Team Skull were hardly serious antagonists. Mostly, they were the butt of jokes as they perpetually failed at their plans to harass other Pokémon trainers.

In Sun and Moon, the character Plumeria summed up their vibe very well when she asked the player whether they thought “some dummies are cute in their dumbness.” The same holds true for Jessie and James.

I also appreciated that Jessie and James were the only Team Rocket members that were like this. Other members of Team Rocket are less funny and more scary, since they’re adept enough at their jobs to extort a major corporation.

By throwing a couple fuck-ups in the mix, the whole organisation has a lot more personality. It’s also in tune with the anime for Jessie and James to be totally incompetent. Again, these Team Rocket members keep getting beaten by a child.

Playing Pokémon Let’s Go is like entering a time machine into your own past, and it was fun to see Jessie and James just as I remembered them. Their presence also makes the sparse plot in Pokémon Let’s Go more engaging. Even after becoming Pokémon Champion, I can’t wait to run into those two losers again.