One community of Red Dead Redemption players is determined to find every secret, ghost, strange sound, Easter egg and more. They don’t just want to find them though, they are also working to record them all and maybe connect them to other mysteries and even other Rockstar published games. This is the wild world of the Red Dead Mysteries fan community.

Red Dead Redemption 2 is a big game, everyone at this point already knows that. You can spend dozens of hours exploring the game and still miss most of the smaller details and secrets. This makes it a perfect game for a large community of mystery hunters. Players can spend hours just hiking around a small section of the woods, documenting anything that seems out of place or bizarre.

What constitutes bizarre or strange is tricky to determine in game like Red Dead Redemption. Sometimes weird bugs and glitches can occur randomly. Remember the weird animal-people-hybrids players encountered in the original Red Dead Redemption? Or all the odd glitches that have been documented in different episodes of Kotaku’s Highlight Reel?

Today on Highlight Reel we have well-meaning horses, head-turners, and much more!

That’s the problem with a big and complex open world, sometimes it’s hard to tell what’s a strange Easter egg and what’s just a strange glitch.

This means a lot of posts on the Red Dead Mysteries subreddit are less definitive or confident. There aren’t many posts of someone going “I found a ghost!”.

Instead, most posts are questions to the community asking if what the user saw or heard is something important. Like a post where a user asked “I went to the post office and when I came out my horse had died. Is this normal by any chance?” 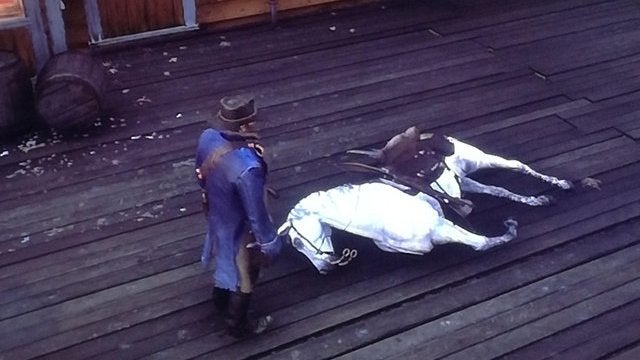 To the credit of the Red Dead Mysteries community, many players are quick to debunk most images or posts. Players responded to the sad cowboy who just lost a horse with different theories. “Could he have wandered onto the tracks and gotten clipped by a train?” or “No mystery here feller, it’s either been clipped by the train or glitched out and died.”

It seems this was less mysterious death and more likely a wandering horse getting too close to a train. Though, there are ghost trains in Red Dead Redemption 2.

The Red Dead Mysteries community has found some interesting things beyond dead horses. Many players have found different markings and carvings in the side of rocks and trees. The exact meaning of these markings has yet to be determined, but they certainly seem like something strange. 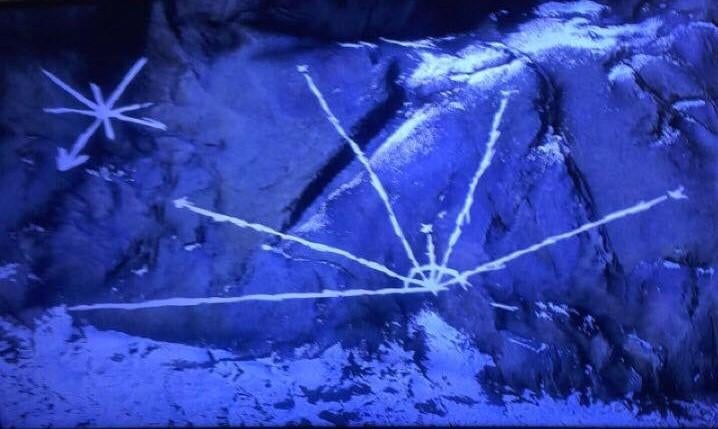 Players have also found a possible pagan ritual site and even UFOs.

Players are actually shooting at the UFOs, destroying the lights on the space craft which seems to cause it to freeze in place. Some mystery hunters theorise that this could be the next step in unlocking more UFOs. It also is a a bit rude, honestly. Poor aliens.

So what does all this mean? Well … nobody really knows. That’s what many players are trying to piece together.

What do all these clues, Easter eggs, strange maps and more actually mean? Are they all connected or are they each separate puzzles, waiting to be solved?

One of the most recent puzzles players tried to piece together involved compasses that are dotted around the map of Red Dead Redemption 2. These compasses are pointing in different directions, so many players believed that they could all be pointing towards something. Maybe a new UFO? Maybe a hidden area? Maybe the third meteorite? (Which is another mystery players are hunting for.) 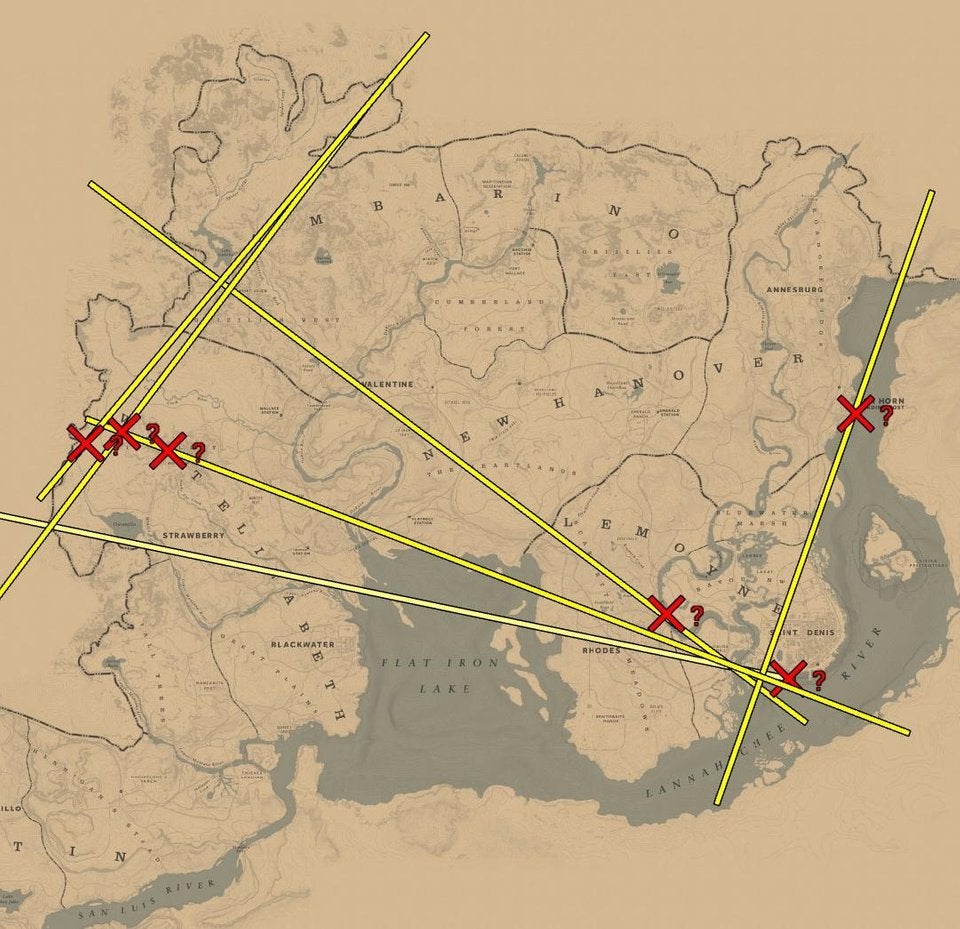 Once again, the community worked together and figured out that most likely these compasses are nothing but random props. Each compass is just the same model, copy and pasted in different locations. So it seems unlikely their directions matter much.

While it might be disappointing that many of the different theories players are making or discoveries they are finding are being debunked, it also makes the hard-to-debunk-mysteries all the more interesting.

As mentioned earlier, meteorites are currently something the community is searching to find. Specifically the third meteorite of a possible collection.

Players have already found two meteorites, but discovered that when collected the game tells the player they have only 2 out of 3 meteorites. Where is the third space rock? Players have different ideas, including the theory the rock is at the bottom of a lake. 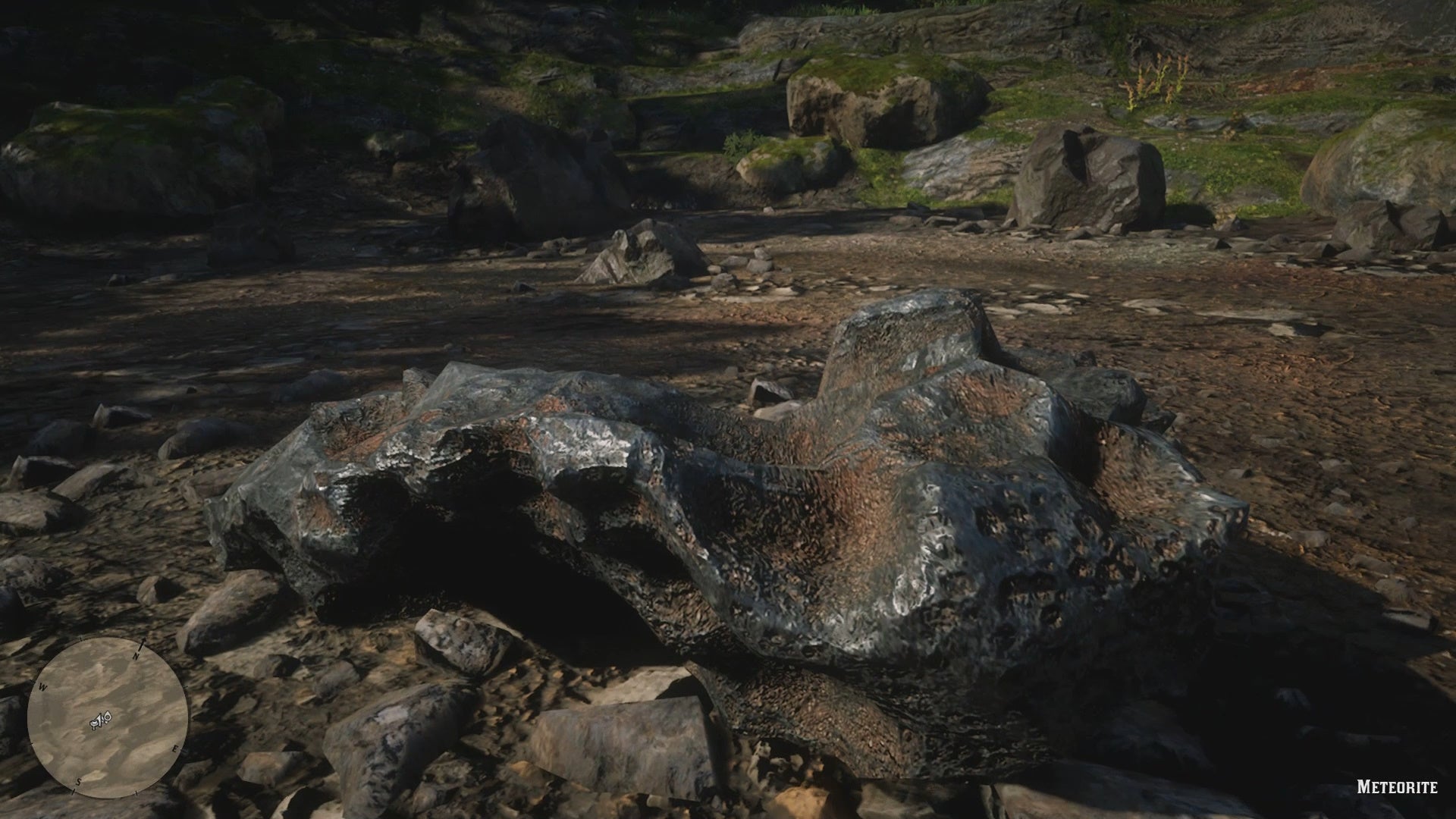 One player even contacted Rockstar and supposedly got a response, but I can’t confirm if the email is real and even if it is, I’m not sure customer support representatives would have this information.

Maybe this mystery is connected to a map of the stars players found a few months back? And maybe both of these mysteries are connected to the UFOs?

There are even some mystery hunters who are connecting Red Dead Redemption 2 and GTA V together using time travel.

One of the side quests in RDR 2 has players encountering a strange man who has a birthmark on his face. This birthmark along with other clues seems to imply that the man might be a time traveller and perhaps is even connected to the Epsilon cult found in GTA V. Maybe the secret of Mt. Chiliad is actually hidden deep in RDR 2?

If there are any more mysteries to be found in Red Dead Redemption 2, it seems almost certain the community will find them and solve them.

Hopefully, all these clues and secrets have a more rewarding pay off than the sad search for the jet pack in GTA V. Those clues ended up meaning nothing and it was only years later that the jet pack was finally added into the game as part of a GTA Online update.

So maybe this is all a wild goose chase or maybe, just maybe, there really is a third meteorite and it will unlock a big, crazy secret.

We just gotta have a little faith, folks.