From its first trailer, with its rooftop parties, car trips, and esports tournaments, the $329.95 Nintendo Switch has been a device that’s not just about which games to play but how to play them. Basic portable play is part of it, but so is connecting to a high-definition television in the living room, or slipping off a Joy-Con and passing it to a friend as easy as sharing a piece of candy.

Those amazing little removable controllers, paired with hardware features like HD rumble and infrared cameras, allow Nintendo to explore new ways to combine real-world activity and gaming with products like Labo and the upcoming Ring-Con. Versatility defines the Switch.

The $329.95 Switch Lite is not a versatile gaming device. It plays Switch games in handheld mode. It does not support television mode. While Joy-Cons, purchased separately, can be connected to the Lite, the Lite’s smaller screen (6.2 inches to the Switch’s 5.5) and lack of an integrated kickstand make tabletop play inconvenient. There is no rumble. There is no infrared camera. It still supports near-field communication for Amiibo support, and has a built-in accelerometer and gyroscope for motion control, so not all of the Switch’s extra features have been stripped away.

But most of them have. As has been pointed out time and time again since the hardware was announced in July, there’s not much “Switch” in the Switch Lite. “Switch Lacking” would be more accurate, if far less marketable.

Though I don’t see it as such, many consider the Switch Lite to be Nintendo’s successor to the 3DS, the dual-screened portable gaming system that’s been desperately clinging to life since the Switch launched in early 2017 and is now all but dead. I understand the comparison. Both the 3DS and the Switch Lite are devices exclusively made for portable gaming. But where the 3DS and its kin had their own ecosystem of unique games, most of which can’t be played anywhere else, the Switch Lite plays Switch games. To me the Switch Lite is to the Switch as the 2DS is to the 3DS. Both play the same games, but one is cheaper and stripped of features that some players never bothered with anyway. I would not trade my 2DS XL in for a Switch Lite. 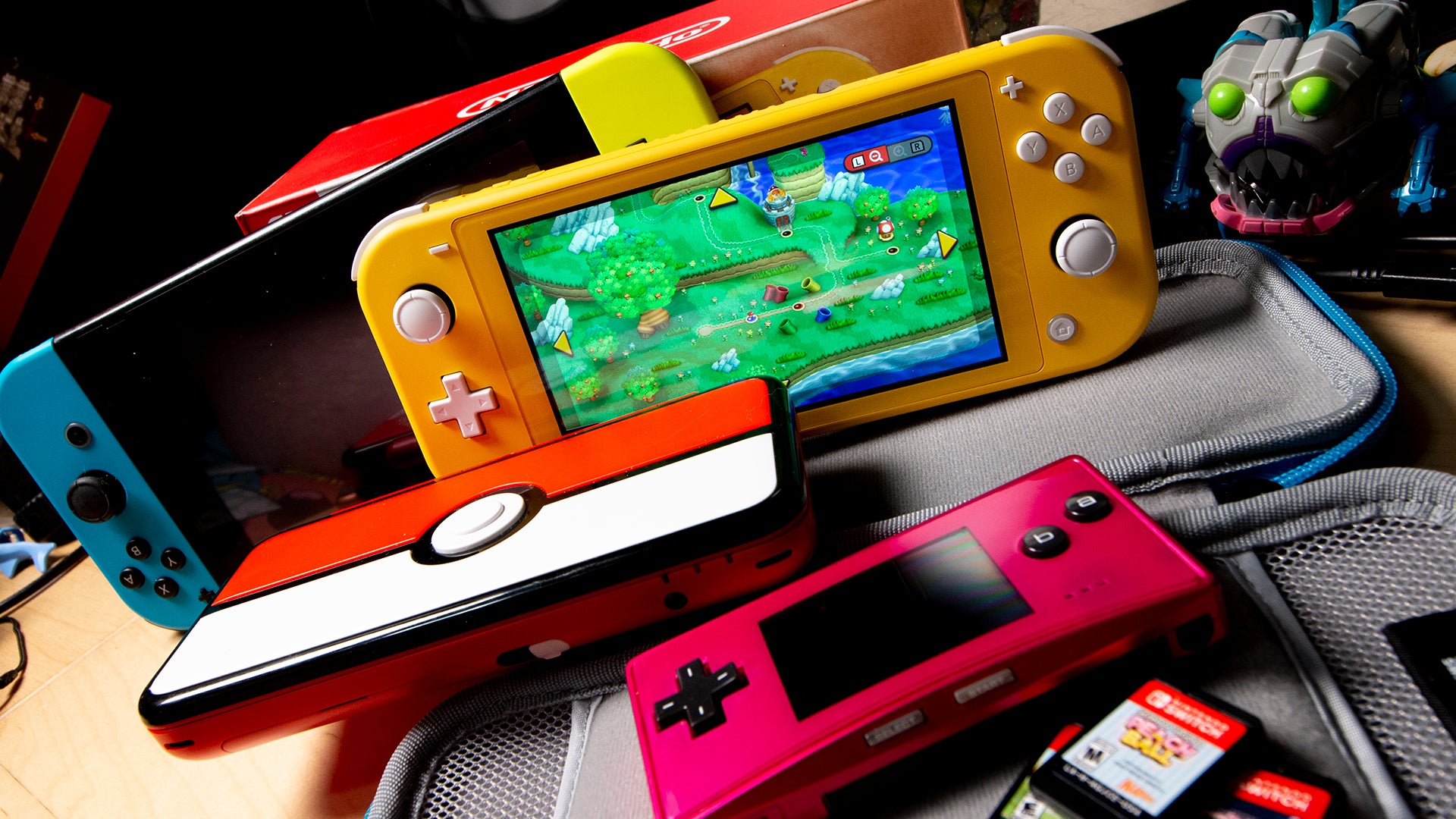 Judged strictly as a portable personal gaming system, the Switch Lite is better than the original Switch. It’s more compact, which makes it more portable. Since it has no removable parts, the Switch Lite feels much more solid and sturdy than the regular Switch in handheld mode, even though it weighs slightly less.

The plastic that makes up the Switch Lite’s casing has a soft and slightly rough texture to it that’s a joy on the fingertips. The three colours Nintendo chose for for the initial batch of Switch Lites, yellow, grey, and turquoise, give the device a hip, retro look.

The battery life is slightly longer than my launch Switch, though not as long as the newer models. And then there’s the D-pad, that lovely little white cross in place of the regular Switch’s dinky buttons. I’ve been playing with the Switch Lite for several days now, and every time my thumb brushes that D-pad there’s still a tiny burst of joy.

It’s only slightly bigger than the D-pad on my 2DS XL and just as shallow, but it’s responsive enough, and most importantly it’s not four disconnected pieces of round plastic. 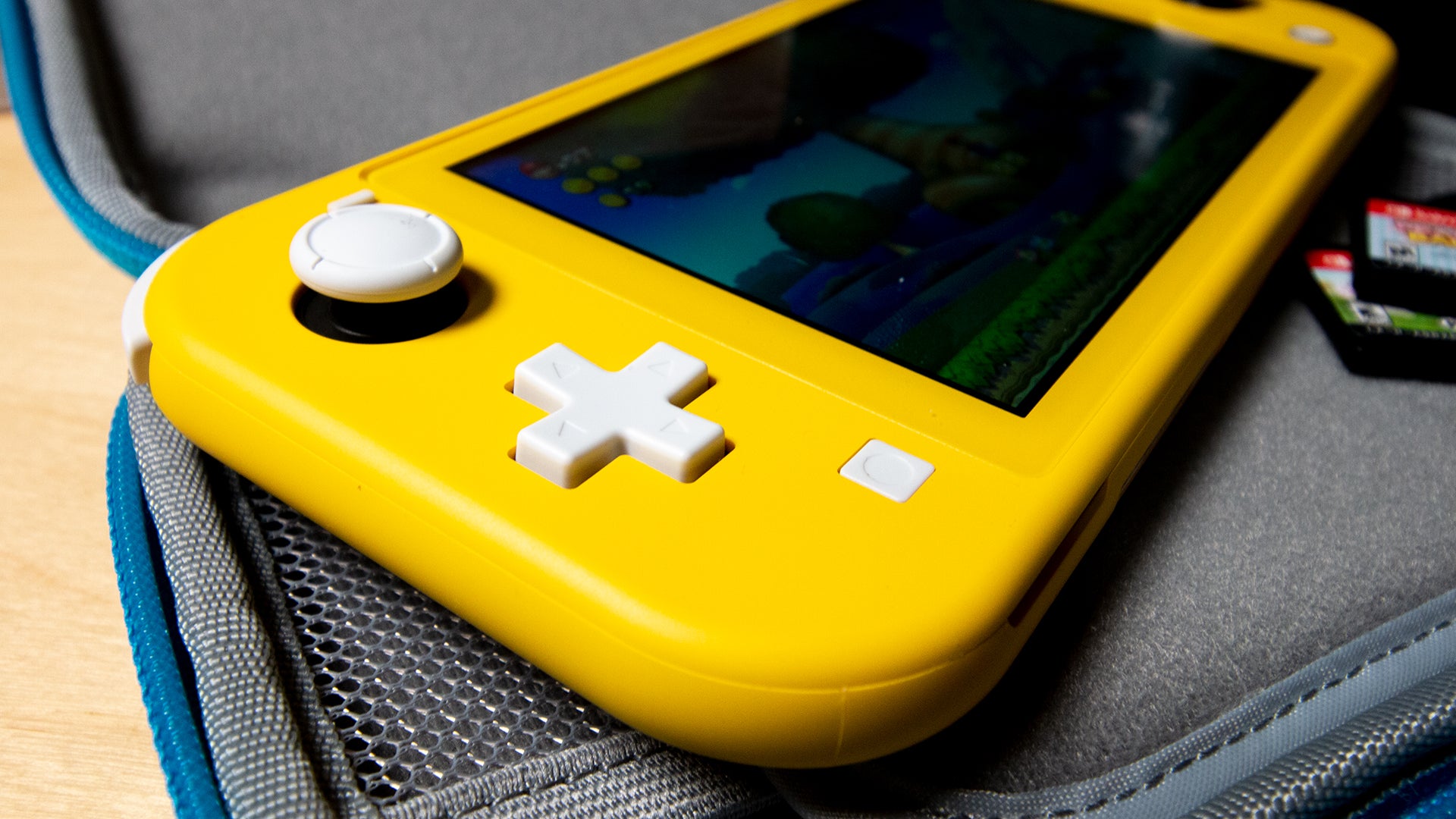 As a portable system, the only real downside to the Switch Lite is the screen size. Most of the time, the .7 inch difference between the regular Switch and the smaller Switch Lite isn’t a problem.. But when I play games like Fire Emblem: Three Houses, recently categorised by Kotaku’s Heather Alexandra as one of the Switch’s “extremely good games with tiny text,” my poor, ageing eyes struggle even harder on the Lite. Maybe the launch of a portable-only Switch with a smaller screen will make developers more conscientious of tiny text. Or maybe we’ll just have to squint more.

If my only desire was to play Switch games in handheld mode, I would choose the Switch Lite over the regular Switch, hands down. It’s cheaper. It plays all the games I want to play. It looks and feels better in my hands, and it’s impossible for my chonky fingers to accidentally disconnect a Joy-Con during heated play. Yes, I have done this.

But the original does a whole lot of cool stuff the Switch Lite does not do — stuff I’ve grown used to, and now feel awkward going without. Removing Joy-Cons to play multiplayer games is a Switch feature I hardly ever use, but when I have, it’s led to some pretty magical moments. My gaming is normally a personal thing, but the ability to make it social with the click of my Switch means it doesn’t have to be.

Being able to drop a portable game I am playing into a dock and have it show up on my television set looking even better than it did in my hands? Also very cool. It might not seem like much of a jump, going from a small 720p screen to a large 1080p display, but the higher resolution coupled with the Switch’s increased processing power when docked can make quite a difference.

Here’s a screenshot I took of the recent Switch exclusive game Astral Chain in docked mode. 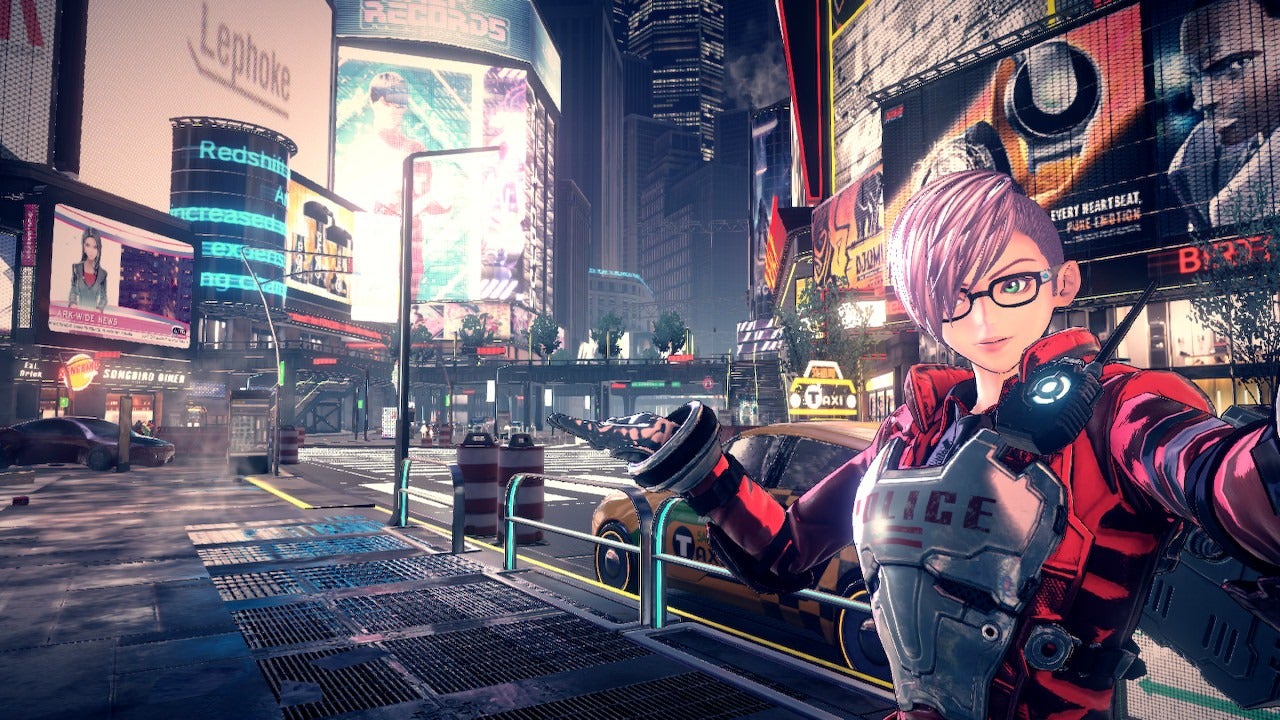 Here is a similar shot taken in handheld mode. 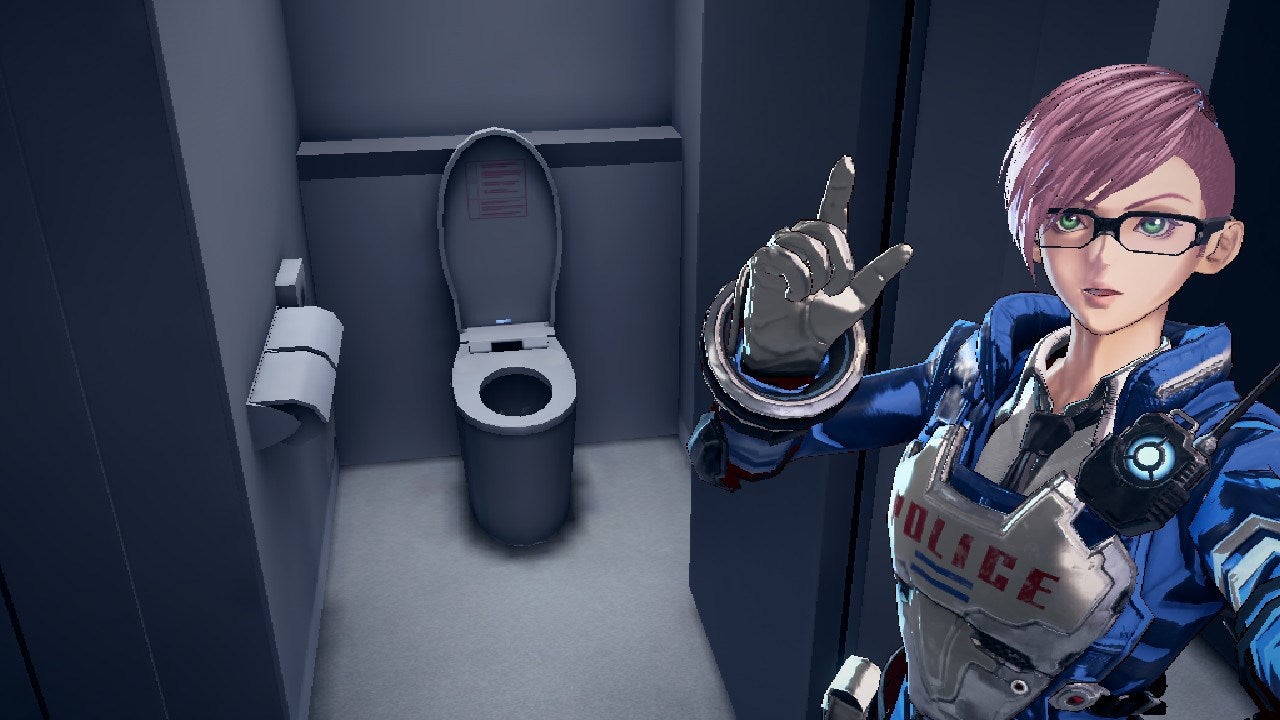 See the jaggy hair and glasses? Compare the textures on the uniforms. It’s night and day. And while the graphical difference might not look as dramatic when playing on a 15cm screen, many Switch games also perform better in docked mode, with better lighting effects and higher framerates. Even if 99 per cent of my Switch play is portable, I’d still wonder if I was getting the most out of the games I am playing with the Lite.

Plus the Switch Lite lacks a very important feature for a person like me who enjoys sharing their gameplay online. It has no external HDMI support. Not only does that mean no TV mode, it also means no connecting it to a capture card for grabbing footage or streaming. I spent years kicking around the idea of spending a couple hundred dollars to have my Nintendo 3DS modified with an HDMI port for recording and streaming. Scraping together an extra hundred for a Switch with that capability included makes perfect sense to me. 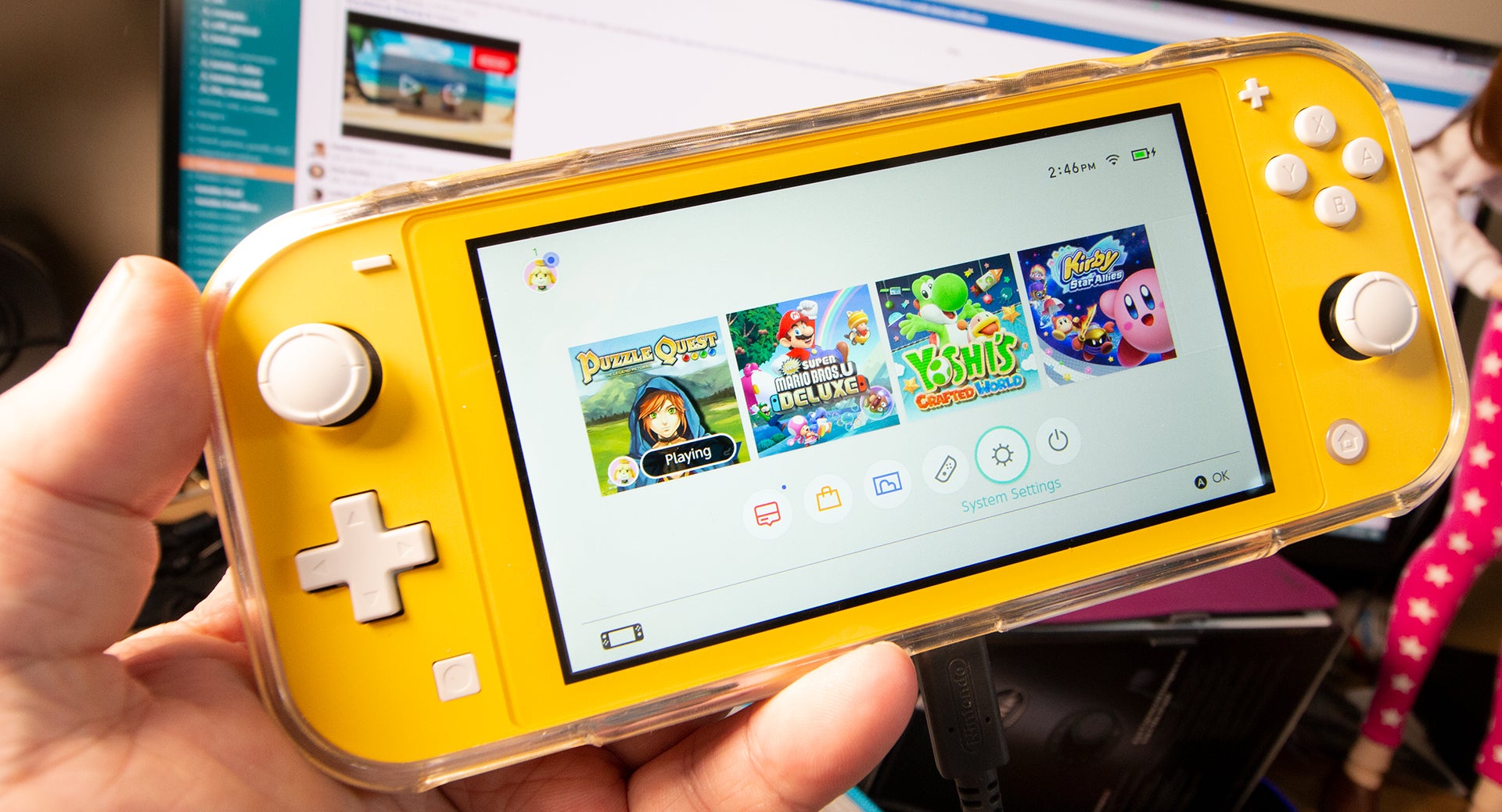 Perhaps you can see the appeal of both models of Switch, and consider buying both of them to get the best of both worlds. I currently possess both a Switch and a Switch Lite. My plan is to keep the Switch proper, with its more delicate build and extra power, firmly seated in my Switch dock for television-based play. The more rugged and sturdy Switch Lite will become my travel companion, tucked into its little blue pouch and safely wrapped in a protective shell cover that I will never have to remove to disconnect a Joy-Con.

I’ve set up my Nintendo account on both devices. The Switch Lite is designated the “primary” Switch on my account, which means I don’t have to connect to the internet to verify I have permission to play games loaded on it. My “secondary” docked Switch has to connect to the internet before I play a game, to verify I don’t currently have that gamerunning on the primary Switch. That’s no problem, since it never leaves the range of my Wi-Fi router. 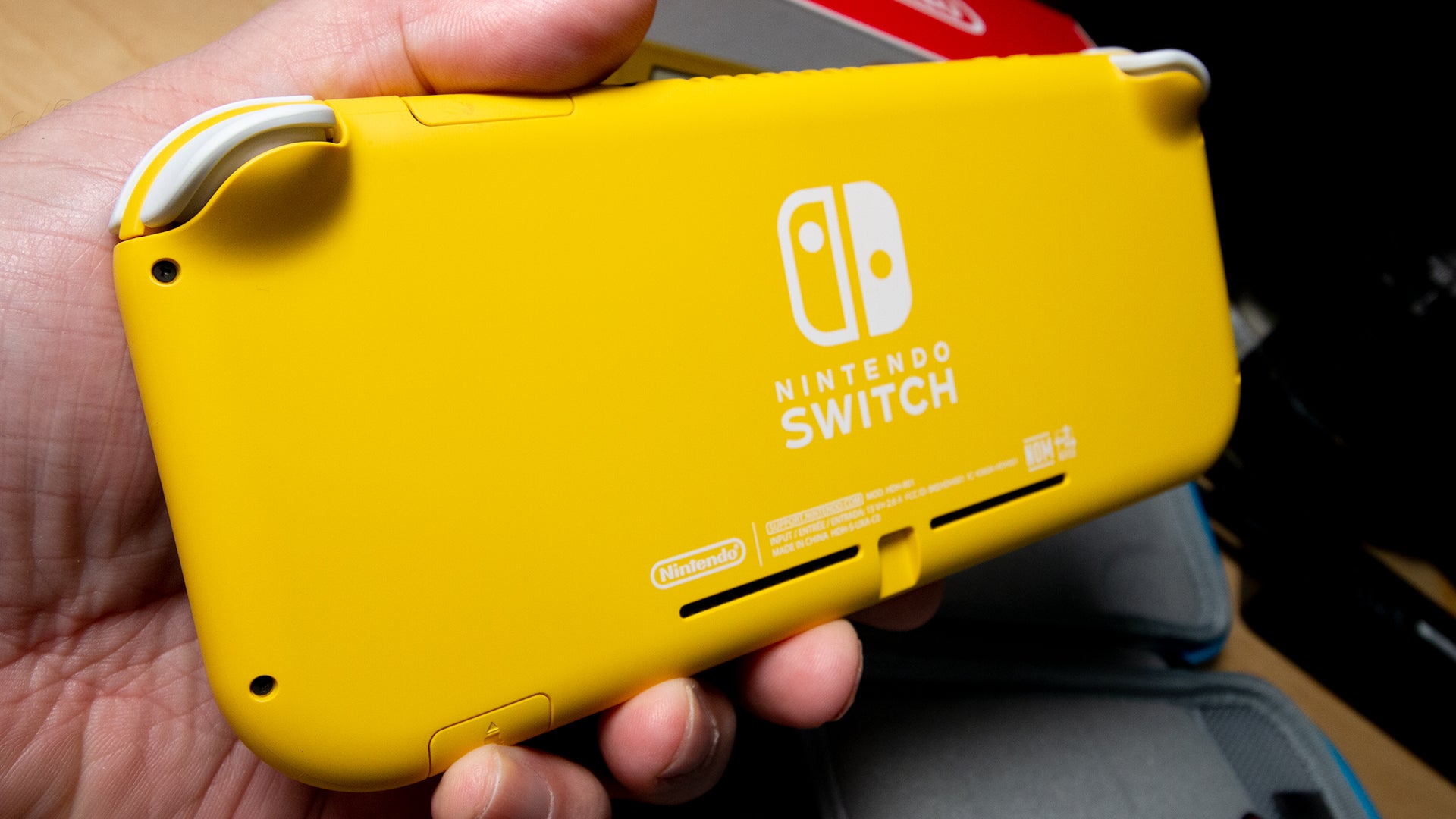 Transferring save data between two Switches is a painless enough process, right there in the Settings menu. As long as the save belongs to the same user, you can transfer it wirelessly. Cloud saves can be downloaded between systems as well, as long as the game being saved supports the feature. Alternatively, I could just not transfer saves at all, keeping unique records on each system. That would just mean I have to level two Puzzle Quest characters at once. Oh no. Not that.

Now, I don’t need two Switches. You probably don’t, either. But if you want to add another Switch to your family’s game collection, something your kids can abuse a little bit more as they throw it into their backpacks or at their siblings’ faces, the Lite might be the answer. And there are people out there who don’t ever dock their Switches or remove the Joy-Cons who will be perfectly happy playing their games exclusively on a Switch Lite. But it’s far from a total replacement for the existing Switch. 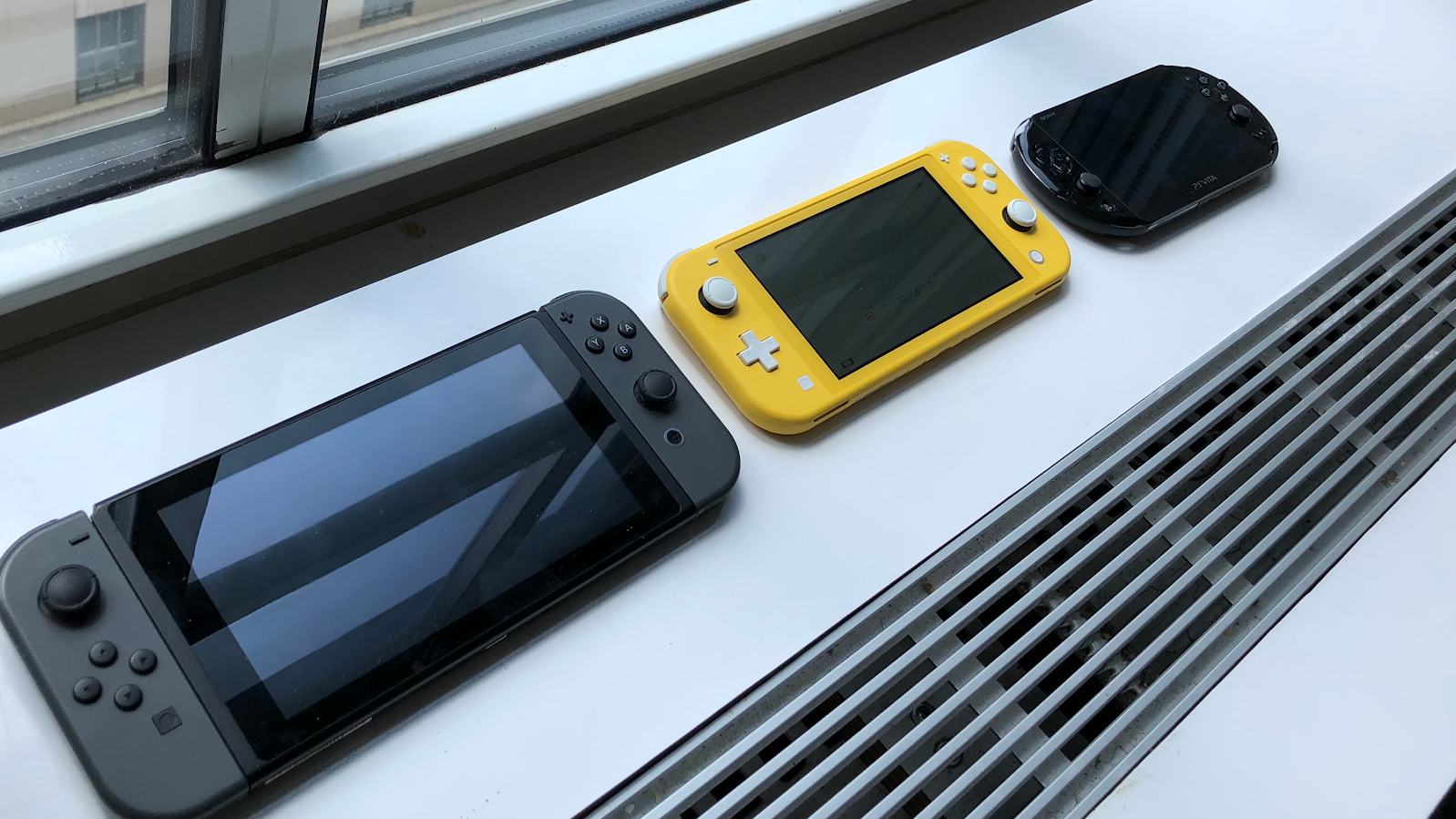 As I began, the Nintendo Switch Lite is one of the finest handheld gaming devices I’ve ever used. It’s larger, and feels more mainstream, than the quirky 3DS. It’s more rugged and earthy than Sony’s precious-looking Vita. It’s the sort of gaming hardware I wouldn’t feel bad just tossing in a bag unprotected. It’s console gaming in the palm of your hand, and you can pull it out during a rooftop party without feeling obligated to share.