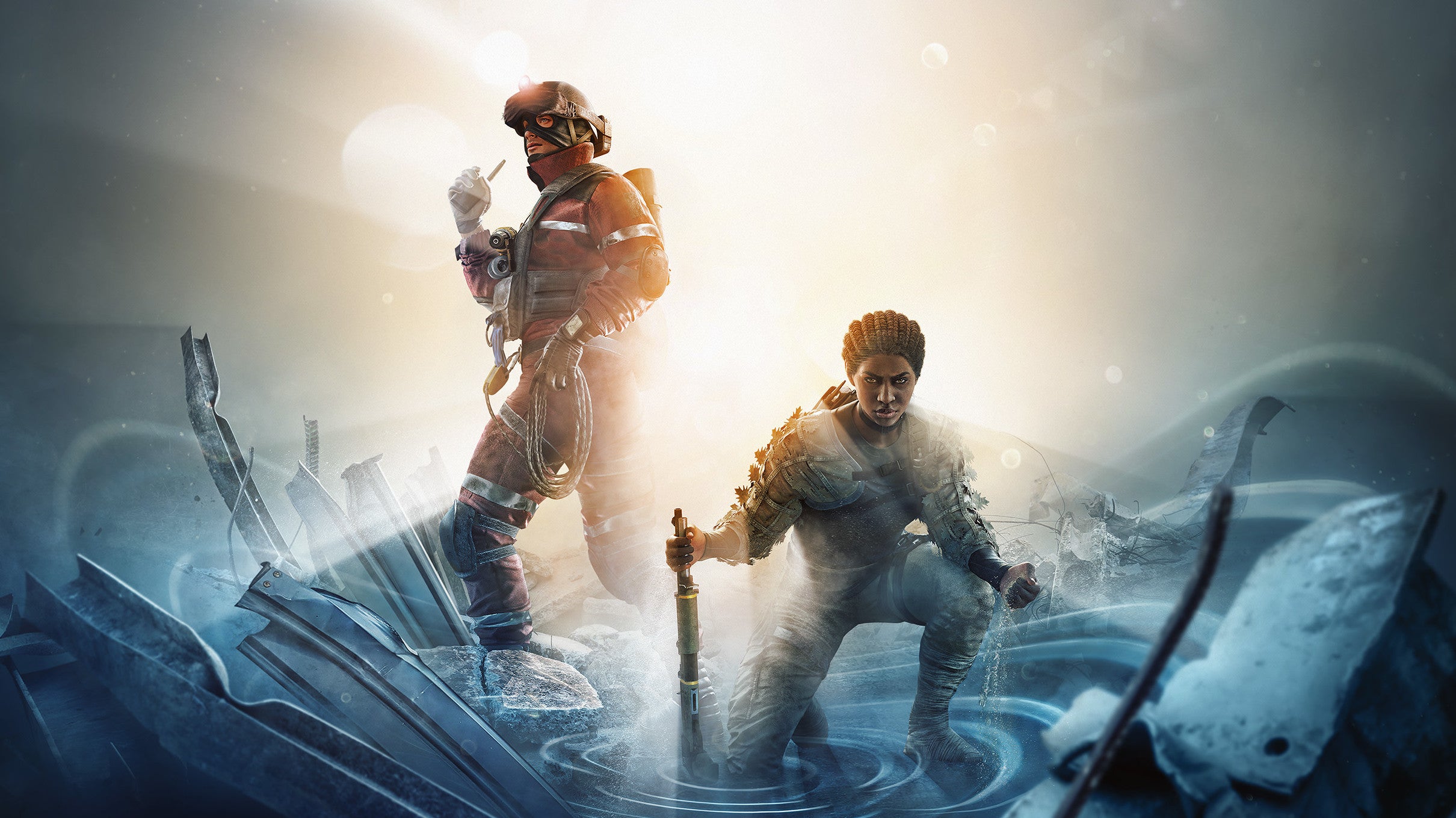 With over four years under its belt, Rainbow Six Siege continues to evolve as a unique, tactical shooter experience that hasn’t really been duplicated anywhere else. Well, except that awkward mobile “ripoff” that Ubisoft is currently suing over. Every new Siege seasonal update adds something new to shake up the meta, forcing players to adjust to changes in the beautiful chaos of operator abilities and destructive environments found in each match.

Siege currently has a roster of 54 operators to choose from, with 27 attackers and 27 defenders. Another pair of operators are set to arrive with June’s “Operation Steel Wave” seasonal update. Such vast choices for operator abilities can now make for a lot of interesting team compositions when you have the right teamwork, but with lack of communication you might end up attacking with an awkward combination of role types. You might have an attacking team composed of more breachers than you need. Or even worse, no breacher role types at all.

My friends and I have achieved defensive-round wins just by using the operator Castle on the “Villa” map, where Castle’s reinforced panels make it very hard to reach the objective on the lower level of the map without an attacker that’s equipped with some sort of breaching device. So, always try to communicate operator picks with your team.

And now more than ever, defensive rounds require strategic moves and high awareness, as some of Siege’s added arsenal of attacking operators are even sneakier with their abilities. Instead of hearing and seeing Thermite’s obvious destruction to reinforced walls, you might fall victim to a tiny peephole created by Maverick’s blowtorch, which makes very little sound.

I’m the arsehole who likes to pick the overpowered Year 2 Blood Orchid operators, Ying and Lesion. Even though both operators have recently been nerfed, they’re still really powerful choices. On the attacking side, I’m usually playing with a Siege friend who prefers to play a breaching operator. Ying’s powerful Candela flash grenades allow me to support them or make a quick play shortly after my friend breaches the enemy defences. On defence, I like to drop Lesion’s invisible Gu mines on the stairs or main doorways. Not only do the mines sap incoming attackers’ health, when I hear a triggered mine I call out the information to my teammates.

I love the operators who feed information with their abilities, because intel can be just as crucial for a win as a well-timed shot. Year 3’s Alibi is a fantastic addition to the roster of info-gathering defenders. Alibi deploys clones, which tag any enemy that shoots at them. I can’t even lie and say I don’t occasionally still get fooled by Alibi clones. When you creep around a corner and see the operator’s clone standing in a doorway or window, you just pull the trigger. Whoops, now you’re marked for the enemy.

Recently I’ve seen a lot of social media posts and YouTube videos from the competitive community, who are very passionate about the game they play, pointing out a lot of flaws within Siege. Some pro players believe that Ubisoft isn’t listening to them. Pro player Niclas “Pengu” Mouritzen released a 2-hour video that discusses everything he believes is currently wrong with Siege. The rant includes everything from certain visual or sound glitches that can affect situational awareness to the request to have dead bodies disappear from the match so players can’t hide in the bodies for a cheap kill. Some of these are completely valid complaints that can be factors in Pro League matches or Ranked play, but some are very rare situations that could lead the casual player to believe that the game is nearly dead or busted, which I think is far from the truth.

That’s not to say that the game ever feels completely polished and perfect, and I can understand frustrations for those on a competitive level. Siege tries to keep things fresh with seasonal updates that introduce new operators and maps. These seasonal shake-ups keep drawing me back to the game, but new bugs follow, too. However, this isn’t just a Siege problem. The same can be said about other shooters with seasonal updates like Modern Warfare and Fortnite. It’s a vicious cycle as every time new additions get made to the game something else seems to break. However, Ubisoft can often be slow to correct those bugs or make much-needed quality of life improvements.

We were years into Siege’s lifecycle before Ubisoft made any real changes to counter the game’s toxicity problem. Siege has long been an unfriendly place to play, where random teammates might call for votes to kick you from the game without reason, team kill you, or just spew hate instead of callouts.

In Year 4, Ubisoft finally implemented reverse friendly-fire to counter the toxic players who abused the game’s prior mechanics. Now if I take damage from a friendly, an in-game prompt asks me to answer yes or no to intentional friendly-fire. Siege matches can get pretty chaotic, so unintentional team killing can happen from time to time. I can usually tell when I’ve died by an accident or a douchebag. If a teammate opens fire on me as soon as the round starts, I’m obviously reporting it as intentional nonsense. This reverse friendly-fire mechanic will be applied to any player during a given match who has been singled out for intentionally team killing. Siege definitely needed this change.

Players can still vote to kick you for no reason, and you’ll get booted if you don’t hold a majority of the votes, so I usually only play Siege when two or more friends are willing to party up. The option to immediately vote someone out seems silly, and should really only be available for players who aren’t contributing to the match. I’ve been voted out of past games before ever getting to prove myself in a single round.

Despite the flaws, there’s nothing game-breaking happening in Siege that makes it unplayable. And I have to give props to Ubisoft for going all out with Siege’s limited-time events. Each one has its own unique theme and ruleset. This month’s “Grand Larceny” limited-time mode was a real treat with the old-school gangsters theme. And last year’s whimsical “Friendship Is Magic” theme brought a really fun vibe. I’d love to see Ubisoft bring back all the limited-time modes together in one playlist, even if just for a weekend. 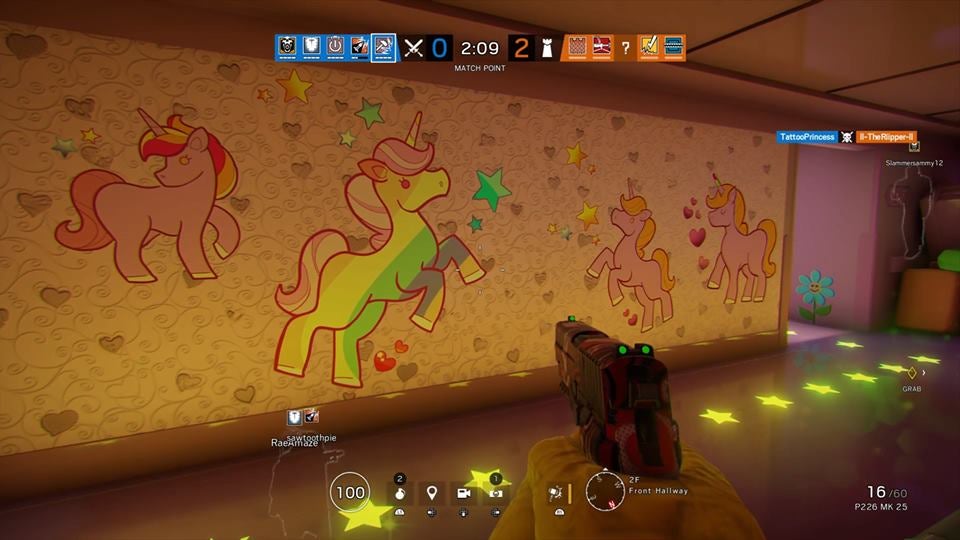 In what is now labelled as Year 5, Ubisoft recently reported that Rainbow Six Siege reached 60 million registered players, and boasted “record engagement levels” throughout January, February, and March of this year. And there’s a lot for those players to look forward to in this Year 5 of content.

Instead of dropping new maps, Ubisoft is now focusing on map redesigns. I’m sure some players are disappointed that there aren’t any new maps coming this year, but I’m just happy that some bad maps are getting a makeover. We previously saw a rework of the old “Kanal” map in Year 4, which was originally a very frustrating map for the attacking team, but now has a much easier-to-navigate new layout.

With the arrival of Operation Steel Wave, we’re set to receive a rework of the “House” map. The classic map will now feature more destructible flooring and a resized layout to give more room to breathe. Redesigns are also planned for “Skyscraper” and “Chalet” maps in future seasons of Year 5. The upcoming update will also add the new proximity alarm gadget for many of the defending operators. The small sensor will stick to surfaces and alert when an attacker comes in range.

All Year 5 operations are launching with Siege’s new battle pass system, which comes with both free and premium streams of cosmetic-only rewards. As is to be expected, there aren’t a lot of meaty rewards for the free stream, but there were some nice cosmetics in Year 5’s first battle pass, introduced with Operation Void Edge. The premium pass is 1200 R6 credits ($US10 ($15)) and you can earn some of those credits back through your progress through the battle pass tiers. However, unlike Modern Warfare and Fortnite’s battle passes, you can’t earn enough to completely cover the pass’s initial cost. But Siege’s battle pass only has 35 tiers, and you level up in many different ways, so it shouldn’t ever feel like an impossible grind for casual players looking to earn extra cosmetics.

Unfortunately, Ubisoft’s Steel Wave reveal stream on May 18 did announce a delay for the anticipated Match Replay feature and the updated 2.0 ping system. With the state of the world affected by the ongoing pandemic and developers working from home, it’s understandable that some delays could happen. Siege’s game director, Leroy Athanassoff said, “We are still going to deliver those features for Year 5. We just needed to adapt our calendar.”

Rainbow Six Siege will probably never be perfect, but it still makes for a very rewarding shooter, akin to a very tactical game of first-person shooter chess. The steep learning curve and constant changes may feel very overwhelming for new players, but this also makes kills feel very satisfying once you’ve found your footing. I do hope Ubisoft finds a way to provide more quality-of-life updates to appease the competitive community, but as someone who’s been casually playing since the beta in 2015, Siege’s updates always find a way to reel me back in.