Ori And The Will Of The Wisps: The Kotaku Review

During my time with an early reviewable version of Ori and the Will of the Wisps, I experienced multiple lockups, intense framerate stutter, and a bug that warped me to the other side of the map after a death. I had a boss battle I’d attempted a half-dozen times reset completely as I landed the final blow. When I finally finished it on Xbox One, it locked up after the credits and synced my save file from the PC version upon restarting, causing me to lose two hours of progress.

And yet, it’s still one of the best games I’ve ever played.

I expected my early review copy of Ori and the Will of the Wisps, the sequel to Moon Studios’ exquisite 2015 puzzle platformer Ori and the Blind Forest, to be somewhat buggy. Emails accompanying the download code warned of multiple known issues and heralded the coming of a “day one” patch that would fix them all.

Ori and the Will of the Wisps was released on March 11, and the promised day-one patch has dropped. The game no longer hangs for 30 seconds when I hit Start. The frame rate no longer drops to a crawl immediately after using the teleportation mechanic. I can exit to the main menu now, something I couldn’t do previously on the Xbox One.

It still hitches briefly when dropping out of the pause menu on the console, but the more serious glitches and bugs seem to have been cleared up. Thank goodness. It would have sucked to recommend a game filled with annoying bugs—and yet, I totally would have, based on my 15 hours with Ori and the Will of the Wisps. 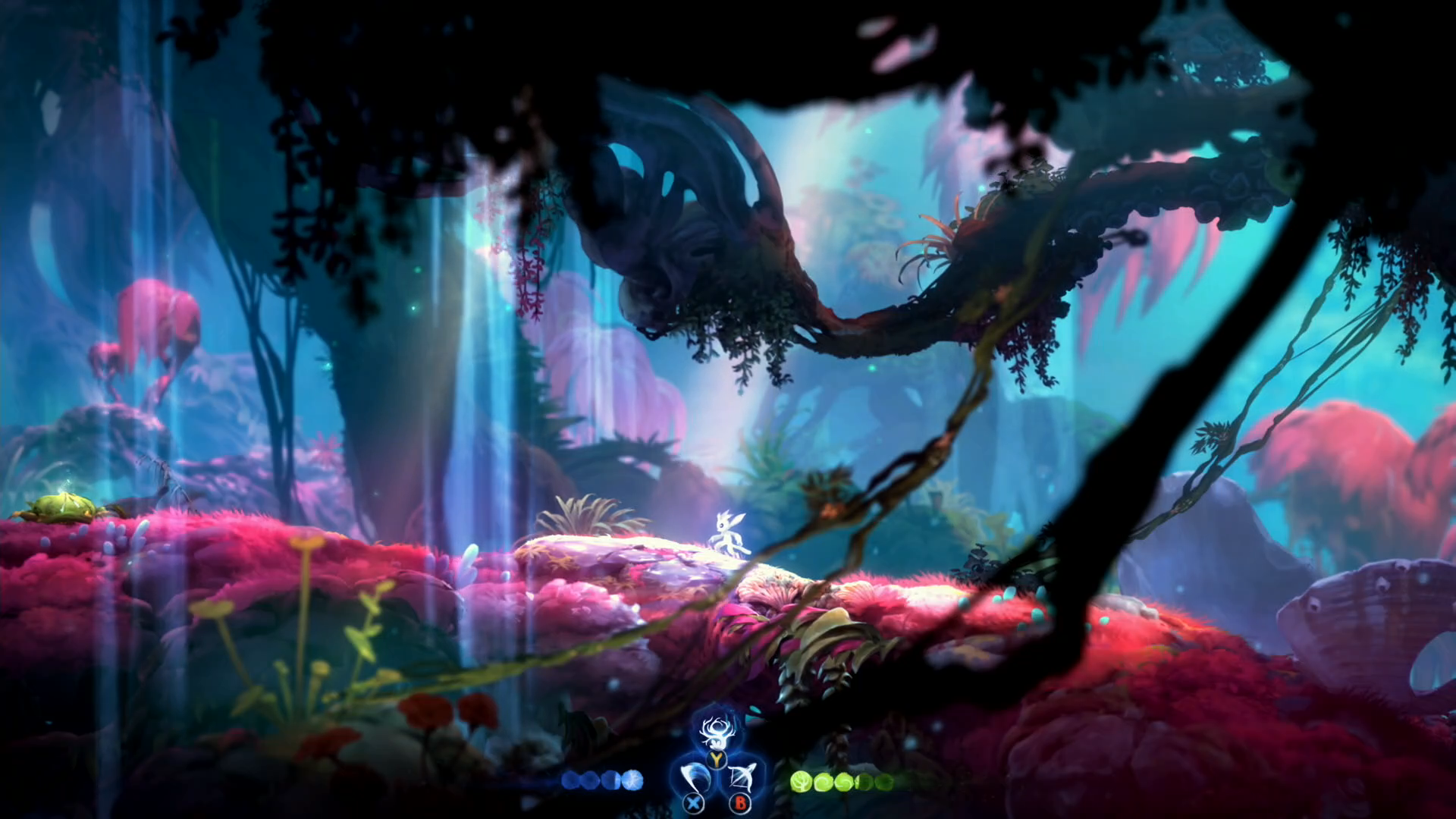 I would frame any screenshot from this game and hang it on my wall. (Screenshot: Moon Studios, Kotaku)

Picking up more or less where Blind Forest left off, Ori and the Will of the Wisps opens with the birth of Ku, the last surviving offspring of the previous game’s angry-owl boss Kuru. Welcomed with open arms into the adopted family of shimmering white forest spirit Ori, Ku grows and flourishes, showered with affection, smothered with hugs, and endeared to the audience. At least, until it comes time to fly.

When the baby bird’s efforts are hindered by an underdeveloped wing, Ori patches Ku’s weak limb with Kuro’s feather (an item from the first game), and the pair launch into an inspiring flight sequence that only feels slightly lifted from How to Train Your Dragon. 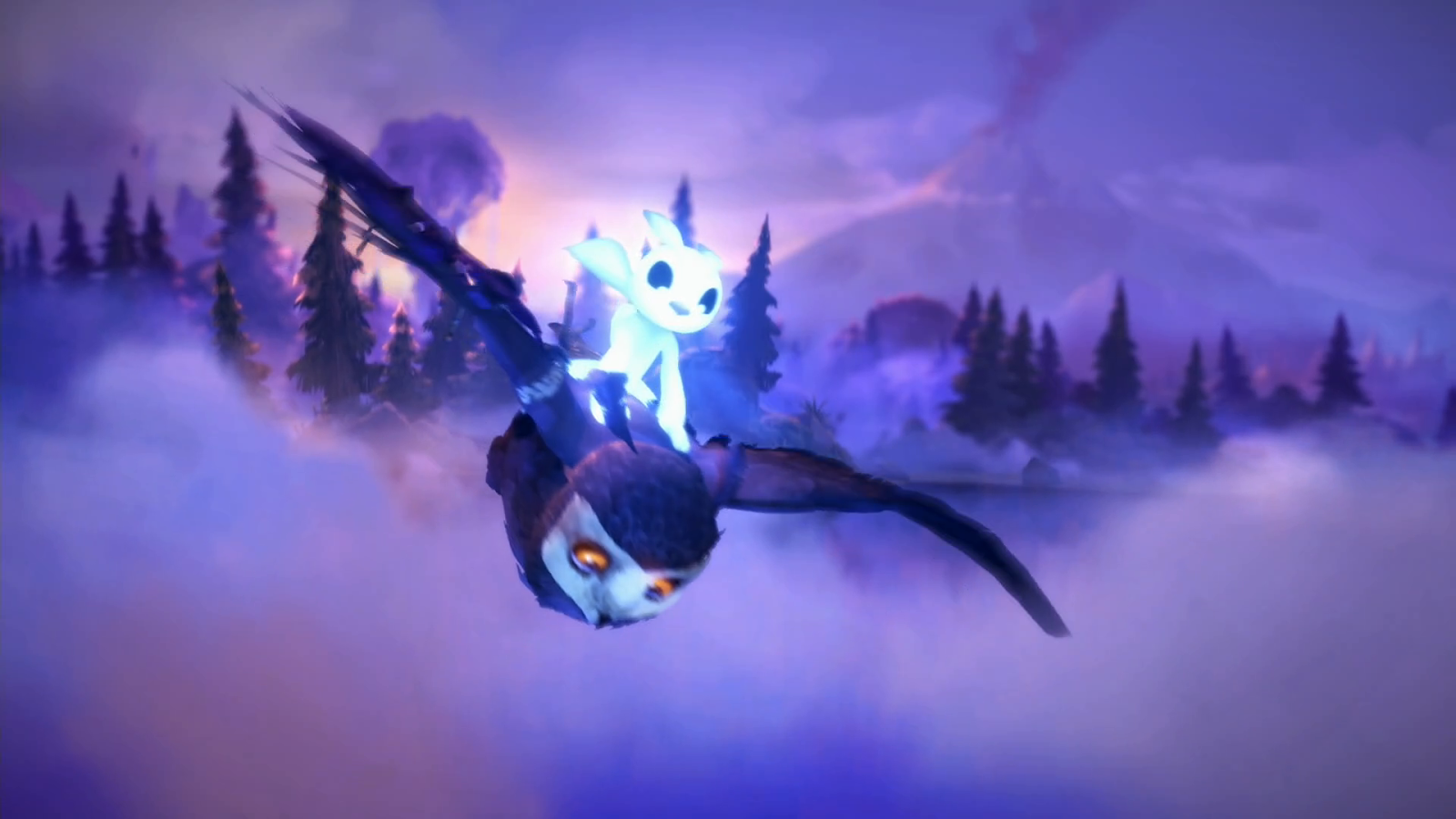 Ori and Ku follow a group of birds across the ocean to a new land and directly into a powerful thunderstorm, the fury of which sends the pair plummeting to the ground in different directions. Lost and alone, Ori searches for Ku, stumbling into a quest to restore light and hope to this new land.

Long story short, game makes us love baby owl, game takes baby owl away, must find baby owl. Other owl-related things happen. If nothing else, between the two Ori games the people of Moon Studios have proven themselves as masters of making us cry about owls.

It helps that the world is expertly engineered to be a playground for Ori’s various traversing talents. Though this new area of the world of Nibel looks like an extensive hand-painted mural, colourful and chaotic, every inch of the sprawling map is designed with movement in mind.

If a spot seems unreachable, Ori probably hasn’t acquired the proper power to get there yet. In shades of Metroid, Ori gains new skills as they hunt for their owl friend and, later, the titular wisps, opening up areas that were previously off limits. Not only are abilities like dashing, grappling, and burrowing through sand essential for Ori to complete their quest, they are also the key to uncovering Nibel’s secret areas, which are filled with additional challenges, side quests, and power-ups.

Normally, my instinct is to skip collectible extras while playing a game for review, but Ori and the Will of the Wisps makes movement and exploring so gratifying that uncovering secrets is just as compelling as following the narrative. I could have finished much faster than the 15 hours it took (not counting the bits I had to do over due to bugs), but I kept getting sidetracked and loving it. 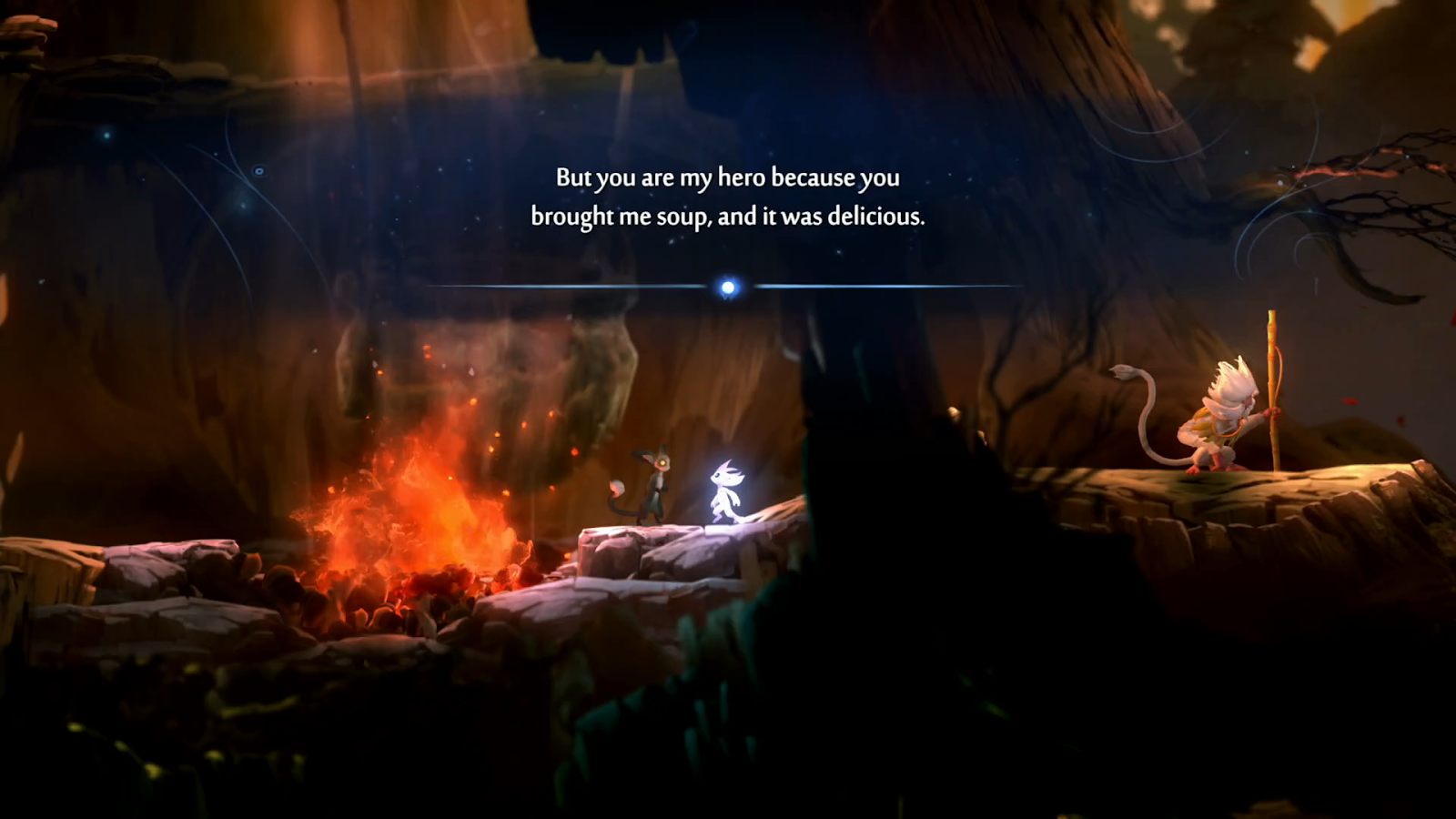 This is the origin story of most of my heroes. (Screenshot: Moon Studios, Kotaku)

The side characters and their accompanying side quests certainly didn’t help keep me on course. Unlike Blind Forest, a more lonely, contemplative sort of platforming adventure, Will of the Wisps’ world is populated by talkative creatures eager to aid Ori on their quest.

The Moki are adorable cat-monkeys with a fondness for soup and an endearing tendency to let bigger, stronger creatures do all the work. A stork-like character with long legs named Tokk hangs out in the hub world, selling special attack abilities for spirit currency. Near him is Grom, a dwarf who collects ore to add new decorations and dwellings to the area. There’s also a mysterious wizard in a cave who sells and upgrades spirit shards, special items with the ability to influence the way the game plays, modifying stats and making Ori more powerful. 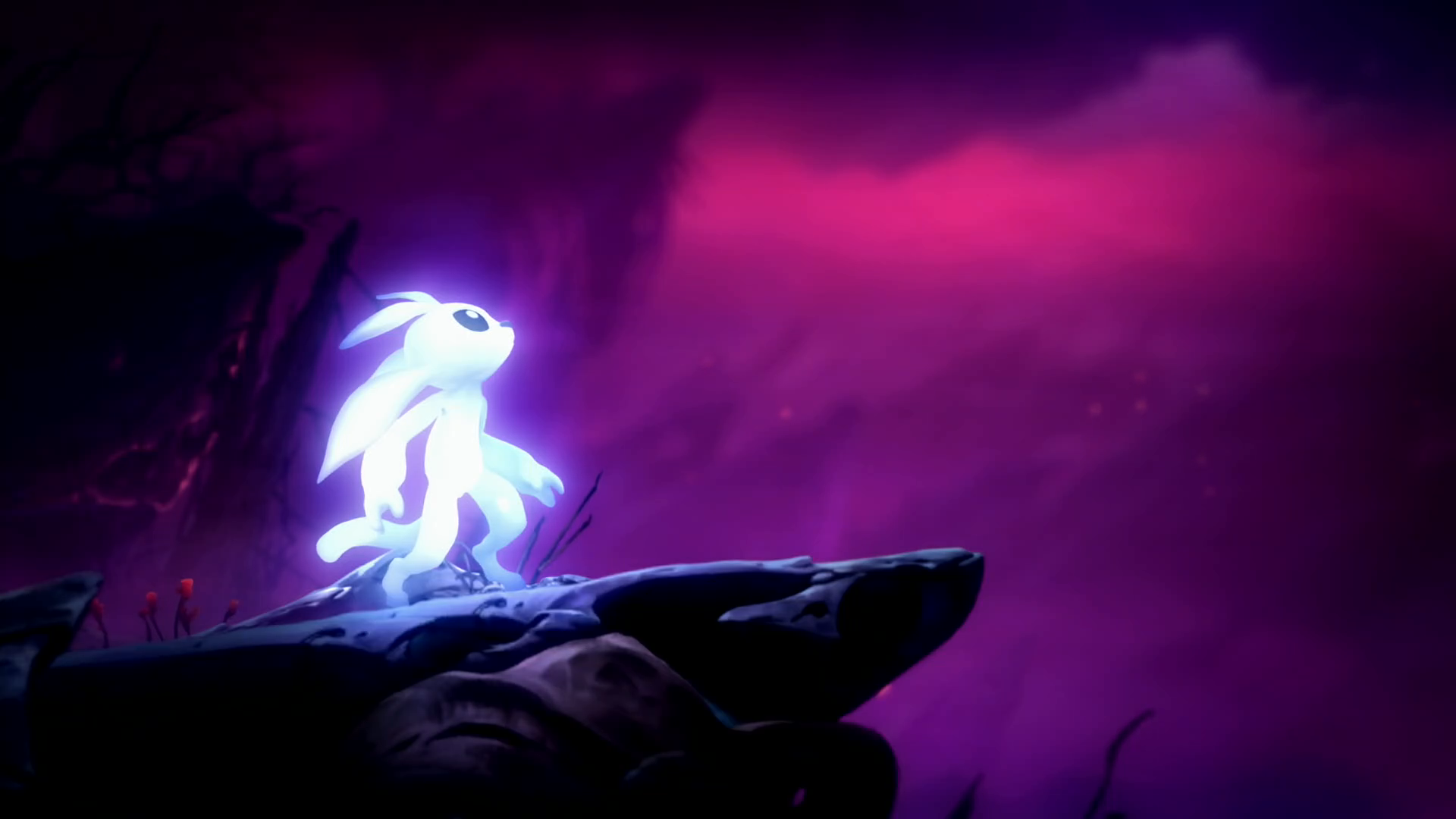 Ori and the Blind Forest is the best. This is better than that.

I promised I wouldn't say Metroidvania.

Getting to play it early.

PC, Xbox One (played both)

Completed game in 15 hours on normal difficulty, swapping between PC and Xbox One using cross-save. 83 per cent completion.

My favourite characters are the ancient animals who serve as Ori’s guides, and sometimes obstacles, on their journey. These massive, dazzling beasts make Ori feel very small, which in turn makes Ori’s accomplishments even more impressive. They’re also an excellent showcase for Will of the Wisps’ unique, ethereal art style. 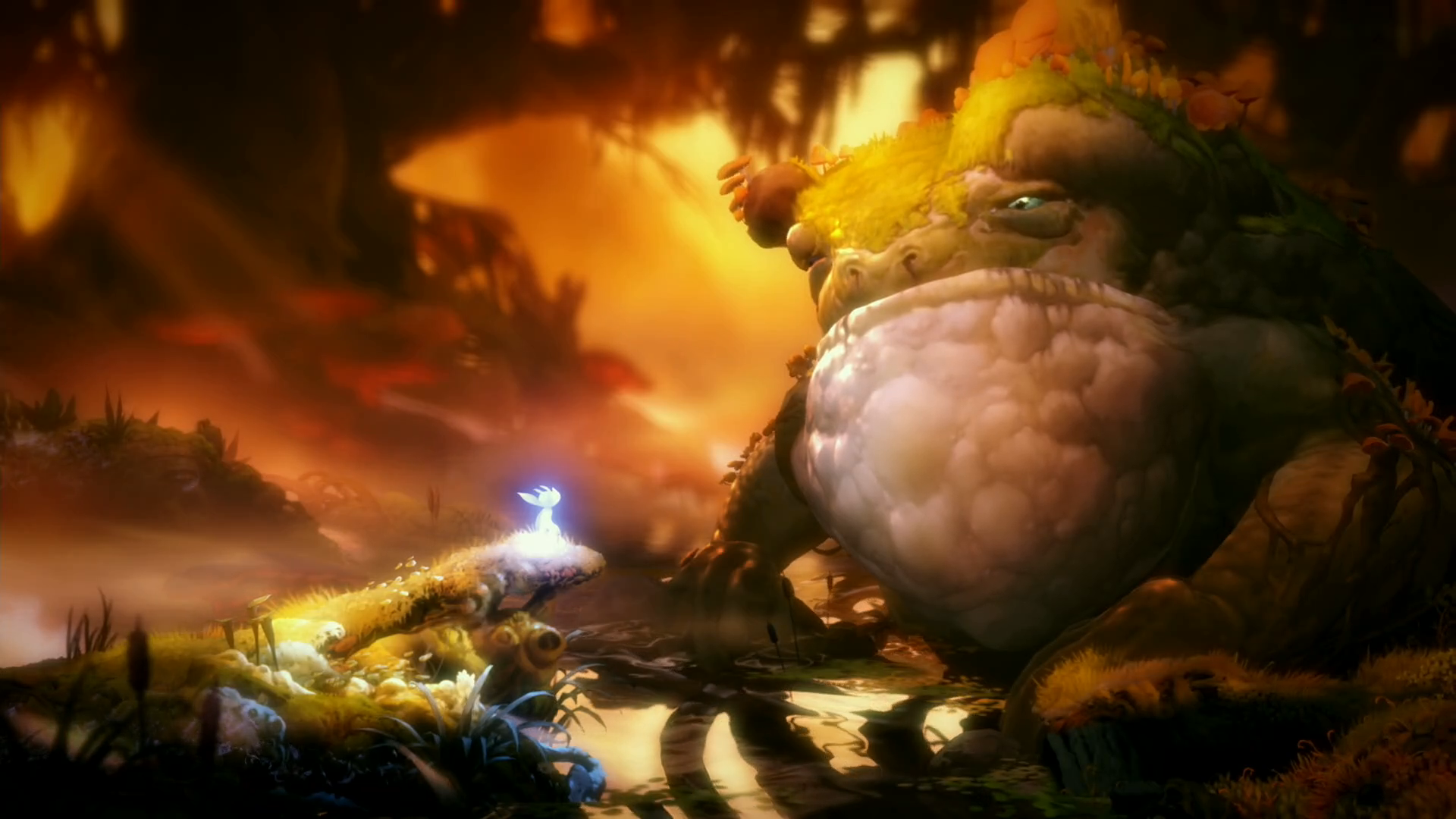 When this big boy first appeared I called over my wife and we just stared for a minute. (Screenshot: Moon Studios, Kotaku)

Will of the Wisps is bigger than Blind Forest in almost every way. The world is bigger. The cast is bigger. The list of abilities and items Ori can collect is bigger. With the addition of more speaking characters, the emotional moments are bigger. The frogs? Bigger. Bears? Same. 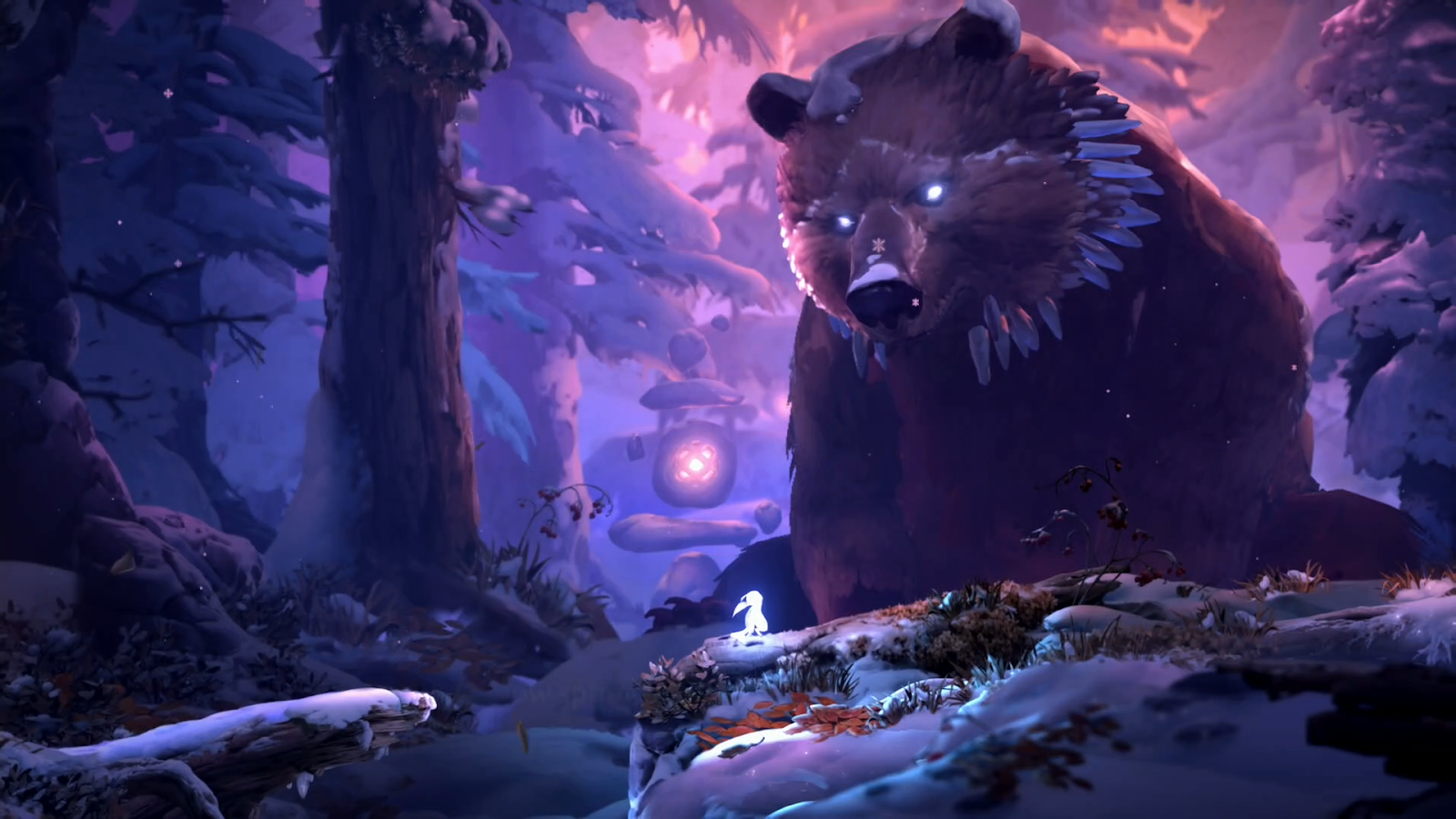 In the case of Ori and the Will of the Wisps, bigger is better—mostly. The larger scope means a few things get lost along the way. It’s easy to miss useful skills (like water-breathing), and some abilities are under-explained. I did not know that the bash skill could break through certain walls until my incredibly helpful coworker and fellow player Ari Notis mentioned it as I was writing this review.

Likewise, Ari didn’t realise that combat shrines, special areas that challenge players with waves of enemies, would reward him with new slots for power-enhancing shards. Though the combat has been greatly enhanced, with many new baddie-bashing abilities, Ori’s still a series that’s more about exploring than battling, so the urge to skip optional battles is strong. Don’t!

With Will of the Wisps, the Ori series’ focus has widened. While some of the details have blurred in the process, the result is a game that’s much more expansive while even more magical and heart-wrenching than the original. That’s coming from someone who just spent 15 hours with a bug-riddled early review copy. I’m guessing it’s even better fixed.